Death Stranding debuts new footage, with peeing but no penis

Just as we think we’ve wrapped our heads around what Death Stranding is, we’ve been thrown another spanner in the works. Gamescom was this week and with it they provided us with a trio of new character trailers for the upcoming Hideo Kojima game. This is the first look we have of the game since it’s release date reveal back in May.

These trailers gave us a somewhat generous glimpse of whats to come with the game. We got a look at a character that has the likeness of Kojima’s industry BFF Geoff Keighley, a deeper look at Del Toro’s Dead Man and a new character by the name of Mama. If that wasn’t enough to raise some questions we now know the game has a peeing mechanic too . Yes, we wish we were kidding.

In the first trailer which we’ve attached above, we’re once again introduced to Norman Reedus’ character Sam. He wakes up from a nap where he is nursing an incubated baby and realises he needs to relieve himself. We’re then shown Sam doing so, and players are even said to be able to direct the stream with the L2 and R2 button. Oh, and urinating has other benefits too, it helps a mushroom to grow. We’d be remiss if we didn’t mention that no, you do not see Norman Reedus/Sam’s penis in this game.

After this, Sam is summoned to a nearby hill where we meet a character through holograph by the name of Ludens Fan. He looks to be a figure that regularly checks in with Sam, investigating objects that are brought to him by the player. To make matters more confusing, he has Geoff Keighley’s likeness but is voiced by Matthew Mercer. Ludens Fan’s trailer ends with Sam comically falling down a hill, waking up the baby Sam is holding onto. Sam then has to rock the baby back to sleep, a mechanic that will be prominent in the game through the use of the Dualshock motion control. 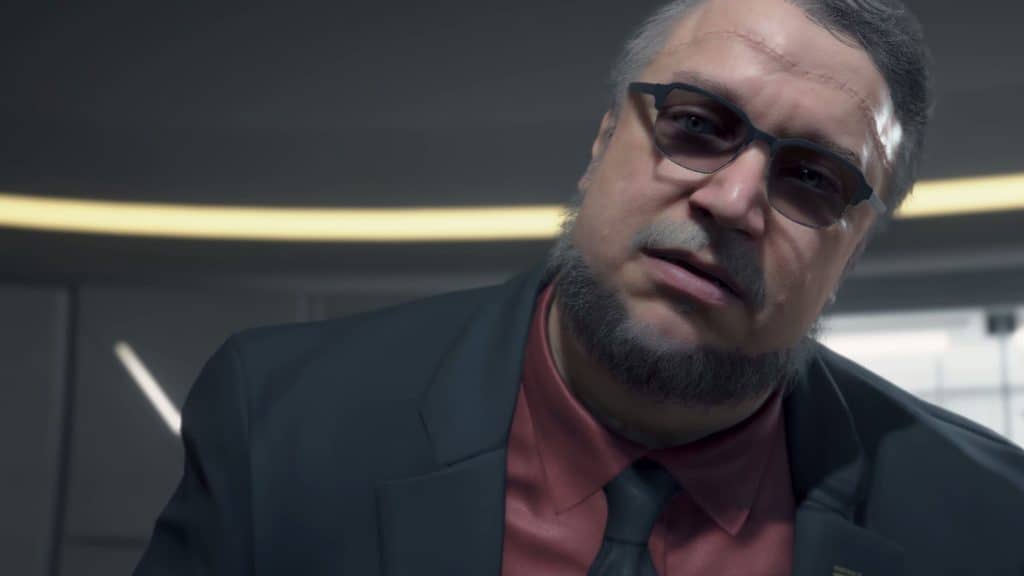 Another highlight from the game’s showing was the Mama trailer. She’s played by Margaret Qualley and the character is named that because she’s the mother of some form of ghost baby. They’re a non-hostile version of the original “BTs,” your threat in Death Stranding. It’s said that this baby of Mama’s was somehow born in the hellscape that is the mirror world, home of the hostile BTs. In the scene she’s coddling this ghost baby after it breastfeeds on some other ethereal ghostly figure, it’s all very weird.

Last but not least we saw more of Guillermo Del Toro’s Deadman in the remaining trailer. He looks to be the kind of go to guru for Sam when it comes to the incubated babies. These babies are called BBs, to be confused with BTs. He works for an organisation called BRIDGES and ‘knows the ways of the living – and the dead,’ according to the description on his trailer. “Babies are just equipment,” Deadman states in the trailer. Weird.

So there you have it. Whether we wanted the game (weird mechanics and all) or not,  we have a closer look at it.

Death Stranding releases on PlayStation 4 on November 8. Will you be jumping in?