Bleak Sword is a new action game for Apple Arcade

Bleak Sword is an upcoming fantasy game with a pixel-art style and scary monsters. It will be one of the games available on Apple Arcade at launch. Publisher Devolver Digital announced the game earlier today.

Developed by More8Bit, Bleak Sword is described as a “dark fantasy action game”, which is quite evident in the trailer. Players will need to slash, parry and dodge their way through tightly packed dioramas containing enemies, traps, or both. There’s magic, items, and a levelling system to help you get through all nine of the game’s chapters. There’s also an Arena Mode and plenty of achievements to keep you testing your tiny pixelated might. The game is designed for gamepad and touch controls, so hopefully there is an intuitive way to control what looks like a fast-paced action game.

The game appears to wear its bleakness on its sleeve, down to its monochrome + red colour palette and the eerie demonic design of the enemies in the trailer. It’s currently unknown if accidentally falling off the diorama is possible, because that might be the eeriest thing of all.

Composer Jim Guthrie (Oxenfree, Indie Game: The Movie) and sound designer Joonas Turner (Badlands, Angry Birds Transformers) will create the score for Bleak Sword.  Looks like More8Bit and Devolver are pulling out all the stops for Apple’s first big foray into gaming. 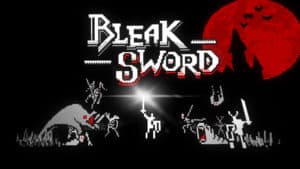 Apple Arcade is an upcoming subscription service for mobile games. Despite only being announced last week, big companies are already announcing titles for the service. This is actually the third title Devolver has announced for Apple Arcade. For a platform focusing on indie games, Devolver Digital seems like the perfect publisher to collaborate with Apple. And that seems to be exactly what’s going on here.

Apple Arcade will be available on September 19, on any modern iPhone, iPad, Mac, and Apple TV.  It will cost $7.99 AUD a month, and will be compatible with PS4 and Xbox One controllers.

It’s an interesting comparison to Google’s announcement in March who are entering the video game market with streaming service Google Stadia. Unfortunately, Stadia won’t be available in Australia at launch. Looks like Apple Arcade will fare better on our brittle download speeds.

Are you excited for Apple Arcade? Are you annoyed it isn’t available on second-gen iPod Shuffles? Because I am. The Shuffle was great. Let us know!