Heartbeat lead dev makes a joke out of transgender suicide

I’m putting up a content warning here as this news piece will not cover the nicest of topics. There’s going to be mentions of some serious transphobia and suicide. If you find your’re not in a good place to read this article, don’t. Go do some self-care instead. Go play some video games, read some comics, or do anything else that brings you joy.

Heartbeat is an adorable game. It’s got cute graphics, cute sound design, a cute story, with cute characters and cute LGBT+ themes. It is, by all accounts, a cute game. What’s not cute is the behaviour of the lead developer, Shepple, and their partner, Nikotine. Even less cute is the recent sale that Heartbeat was on. How can a sale not be cute? Probably when that sale references the suicide rates of transgender people. Buckle up folks, this one is a doozy.

Our story begins on September 20th when the artist Nikotine, prominent member of the Heartbeat fan community and girlfriend of the game’s lead developer, went on a transphobic Twitter tirade. She then doubled down, spewing more vitriol and hate towards the trans community as TERFs (trans-exclusionary radical feminists) and trolls from 4chan came to her defence.

This tirade included such ‘witty’ one-liners as: “You can surgically mold your penis into the Eiffel Tower if you want. You’re not going to become France”, “I’m lez, I don’t want your dick”, and “Transwomen arent women.” Truly ‘charming’ sentiments. During this transphobic temper tantrum, Nikotine, emboldened by the worst corners of the internet, announced that the game would be going on sale.

The announcement seemed harmless at first. That is until you look at the percentages the game was reduced by; 35% for the base game, and 41% for the soundtrack bundle. If you think these numbers are suspicious, or reference something, then you’re absolutely correct. These numbers are an allusion to transgender suicide rates. In America alone, 35% of transgender students attempt suicide. In Adults that number is 41%. And it would seem the developers were making a joke out of it. 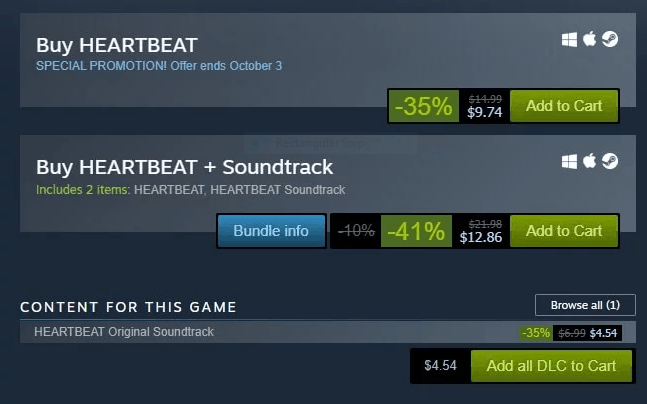 During all of this, Shepple, lead developer on Heartbeat and Nikotine’s partner, had remained silent. Nikotine had repeatedly stated that the ‘views’ expressed were her own, and, up to that point, it seemed to be the case. And then friends started to come forward. First, @BeetleButch, posted screenshots from their DMs where Shepple said that transgender issues shouldn’t be included in feminism. Then @octog4y came forward with more information.

Shepple not only shared the views of their partner, but endorsed them. Highlights include stating that one’s assigned sex was “immutable”, and that trans people were “regressing us backwards” and “rewriting the rules”. My personal favourite was where they claimed that TERF was “a newly-made buzzword used to shun people, especially women, who dare commit the crime of wrongthink.”

I was crushed about the recent news with #heartbeatrpg. Due to my connections I was given an opportunity to speak with Shepple. Initially, I wasn't going to share any of our exchanges, but after her 2nd response… pic.twitter.com/MV5bvlOBpd

What’s the most disturbing throughout all this is Shepple’s claim that they “were a trans man” and “detransitioned”. They state that they still experience gender/body dysphoria, going as far as to “wear men’s shirts to this day so [they] can hide [their] breasts.” They then imply that being transgender is something one can get over with therapy and that they didn’t want to “become a sap for pharmaceutical companies” by taking hormone replacement therapy.

This lends the entire fiasco an air of pity and self loathing. It’s sad that the developer feels the need to strike out at a community they were once apart of due to personal issues. But the couple’s own insecurities surrounding the transgender community are no excuse for their toxic views and toxic conduct. This kind of behaviour dehumanises some of the most vulnerable in our society.

Here’s some stuff from our DMs when I was trying to convince her to back down and reevaluate some of the things she was saying pic.twitter.com/Pa93ZtvDxN

The high suicide rate of trans people is not a topic of comedy, and their choice to turn it into a joke is callus and cruel. With how sales on Steam work and the fact that Shepple is the owner of CHUMBOSOFT, the company responsible for developing Heartbeat, they were the only one who could have set those sales percentages. Those numbers are ones constantly used by trolls and conservatives to mock and deride trans people. With the amount of research they claim to have done into the “transgender issue”, it’s hard to believe Shepple didn’t know what those numbers meant.

These views and actions not only sour Heartbeat, but also sour all the hard work many others have put into the game. Sil, an artist on Heartbeat, had to formally cut ties with CHUMBOSOFT so that they wouldn’t be seen as endorsing this behaviour. Trass, composer on the game, had to reassure their fans that they supported trans women and their right to call themselves lesbians. These are hard working indie developers who have had their work ruined by association.

In light of the recent controversy concerning HEARTBEAT, I want to make sure my friends know where I stand on the matter:

I support trans women and their rights to call themselves lesbians.

Transphobia in games development is a serious problem, and the fact that even the indie scene isn’t immune is deeply troubling. Heartbeat was cute. But now it’s just another game ruined by the awful actions of its developer. Myself and others can now no longer enjoy what was once a fun piece of media because of these actions. From this point on, Heartbeat will forever be viewed through the lens of its creators behaviour.

Laura Kate Dale addressed the issues Nikotine ranted about far better than I could. But to sum my thoughts: Trans women are women, and trans women who love other women have the right to call themselves lesbians, and TERFs have no place in videogames. Deal with it.