Legends of Runeterra gets Riot fans excited for the future

As Blizzard faces some of it’s worst criticism to date , Riot hits the gaming world with not one or two, but 4 new games. The once derogatorily refereed to “one trick” developer hits back. Legends of Runeterra is its first major swing, and it has excited League of Legends lovers around the world.

To date, I have never been more excited about a card game as I have about Legends of Runeterra. When Hearthstone arrived, I took two days off work and came out the other end, at best, a casual fan of Hearthstone. Magic The Gathering Online kept me satiated. Then came Eternal, Slay the Spire, Gwent, Shadowverse and finally Pokemon TCG online.

None come anywhere close to scratching the itch as well as Legends of Runeterra has. And make no mistake, Riot’s announcement of this game was no coincidence timing wise. The couldn’t have picked a better time as fans abandon Blizzard in hordes.

In a surprise announcement; Riot hosted a live stream outlining information on a number of new projects coming close to completion and launch.  Among the announced games Legend of Runeterra was not only announced but showcased – and for a game in early beta (some suggest even Alpha) its polish left fans impressed and desperate to get access. As the broadcast went on, moderators of the Twitch page struggled to moderate the spam of !keys as fans displayed their want for access (to no avail mind you).

Fans, on the unofficial Discord and Reddit alike, have openly commented at how polished the game felt 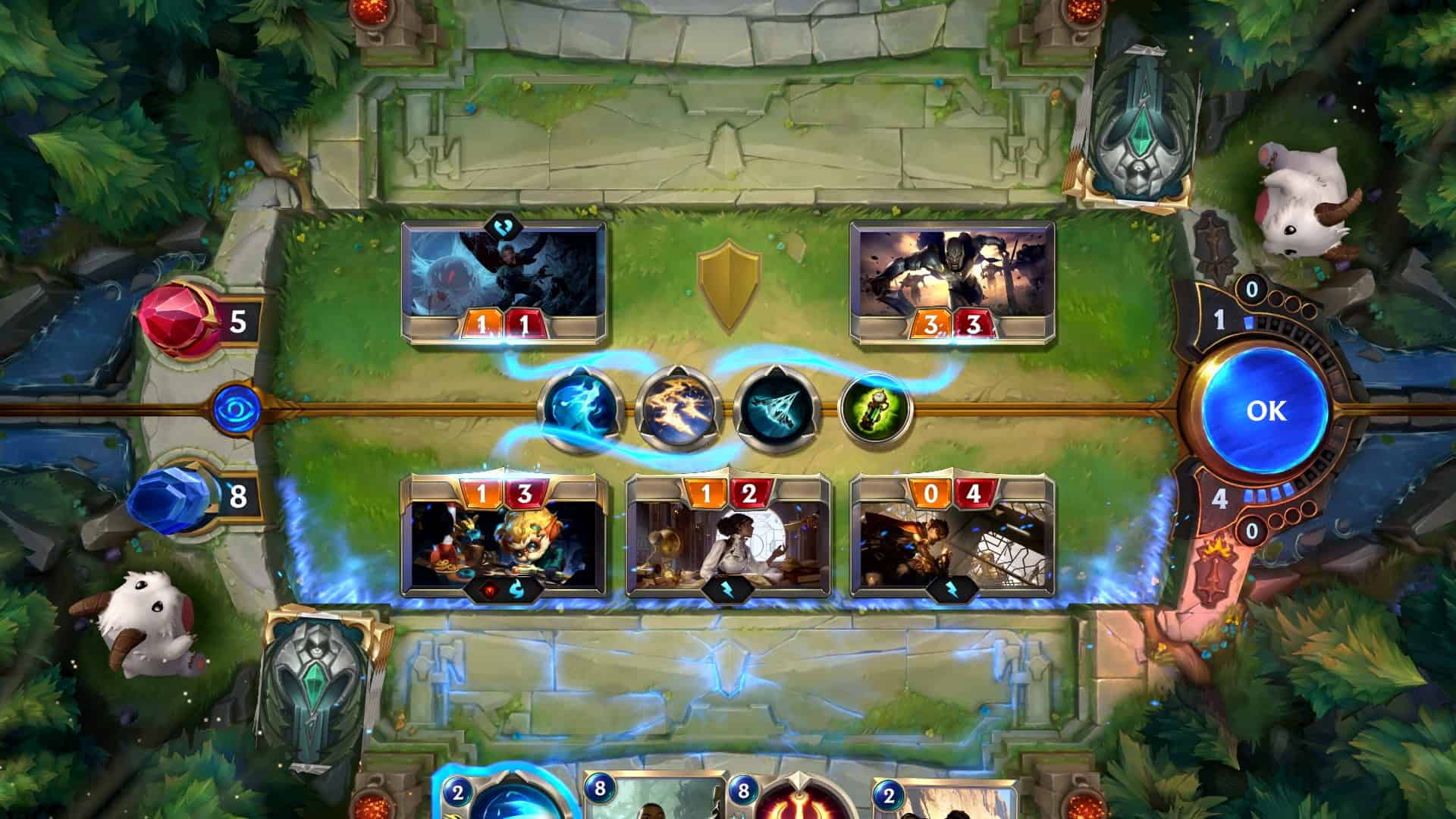 Major streamers such as kripparan and Disgusting Toast were some of the first to stream the game in which game access drops were available. Without a direct invite from Riot, the only other way to get access was to get lucky with a drop from watching one of the twitch streamers playing the game.

Many of us know that seeing a game on show is one thing and experiencing is another. I was lucky enough to get access to Legends of Runeterra. Now having a rudimentary understanding of the game; I got stuck right in. There is a basic tutorial which teaches you the fundamentals. The cards work in a similar system as Hearthstone or Magic the Gathering. You have a mana value, an attack and defense value. Nothing new there. What is interesting and makes the flow of battle far more interesting are the battle phases. In a single round you have an attack and defense phase, with “sub-phases” for casting and defending against cast spells.

For the Preview Patch, we were given quick access to most of the cards so I got stuck into deck building and fumbling my way through the crux of it. The cards are broken into each Region that makes up Runeterra. Within those regions, the heroes were familiar with from League of Legends reside. You can combo any two regions in a deck with 6 hero cards and the remaining with units and spell cards of the same region making a deck total of 40.

Gameplay takes around 15 minutes per game, and averages around 10 rounds per game. Your Nexus has 20 hit points and the goal of the game, like most CCG’s (Collectible Card Games) is to whittle down your opponents Nexus to 0. I found it very easy to find strong combos between matching regions such as the Fiora/Shen combo, which can win you the game in 4 rounds if your opponent doesn’t quickly remove your Fiora.

One of the first “meme” decks to appear, created by streamer Disgusting Toast, was the Teemo Mushroom deck. Teemo places mushrooms in your deck and when you draw a card it does +1 damage for each mushroom placed on your face down cards. Disgusting Toast found a way to combo the deck so that by round 7 his opponents had 900+ mushrooms, rendering 22 damage per card draw. This feels a bit silly, but we must remind ourselves that the game is in beta still. 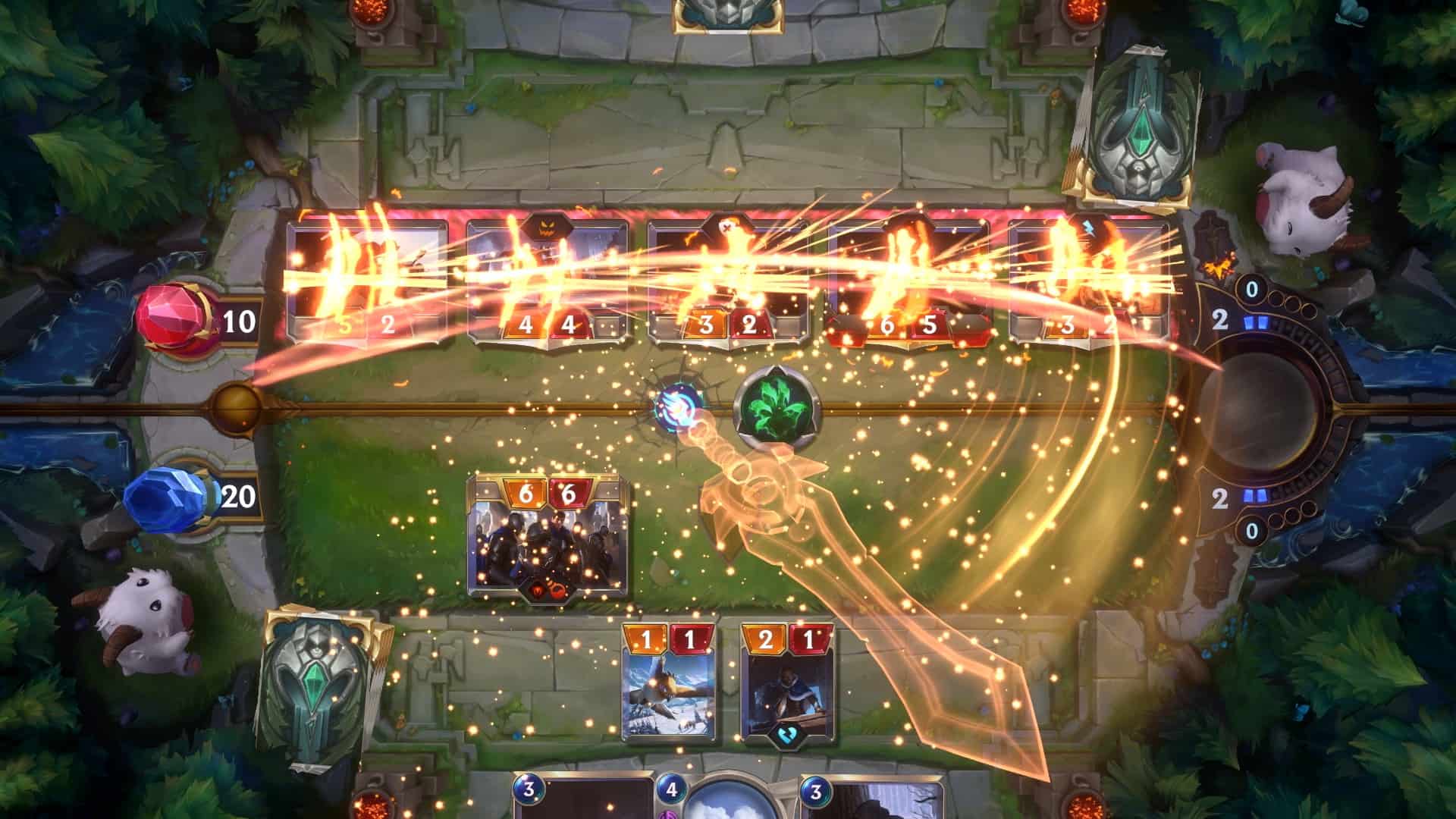 The biggest thing worth noting is the way in which players can access cards. Riot boasts that peoples wallets wont do the winning. Their system and reward system allows most casual players to access the full list of base cards by the 40 hour game play mark. This may feel steep, but for a game targeting the free to play market, this goal-centric approach is incentivised both with generous daily and weekly rewards given to players for playing which you can choose to focus around the regions you’re most interested in playing.

You collect “Wild Cards” as rewards and can use the number of wild cards you have available to craft any specific cards you don’t have in your collection. In my opinion, so far, this is the best approach to a free-to-play CCG. Riot intend to monetize the game through selling wild cards, rather than randomized packs, card skins, alternative card boards and more for those inclined to vote with their wallets.

I see some people raising concerns around this system, suggesting that this isn’t much different to Magic, or Hearthstone, but having played and utilised the system, it feels different in a good way for me at least.

Below is a road map of the beta sessions Riot will be making available to those lucky enough to get a key drop. Anyone who got or gets access during the preview patches will have access to the closed beta in Q1 2020. So far, the only way to gain access is via Twitch drops at this point in time. 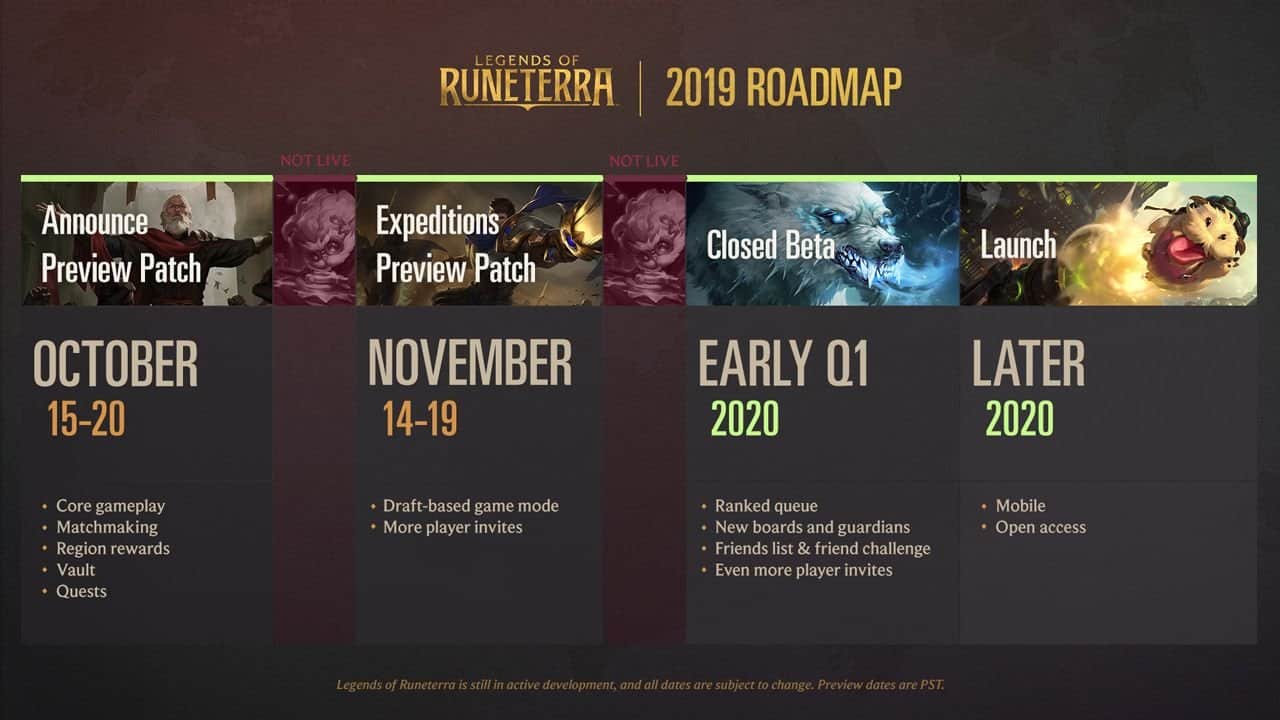 Legends of Runeterra is an exciting upcoming card game from Riot which is polished and taken ‘done’ mechanics and adds a sense of control, progression and development in a new and fresh way.  Whether the game is successful is another matter.

For now, fans around the world are closely anticipating and waiting for the next preview patch in November. Until then, here is a reddit fan made list of things to do while we wait for November.