House House has given the public another reason to love them. They were already lovable due to the fact that they are a Melbourne based game developer consisting of just four men who created the cheeky and cute 2019 indie hit, Untitled Goose game. The game, released in September 2019, sold a million copies within its first three months of release, won Game of the Year at the Australian Game Developer Awards and has been Tweeted about by famous people such as model Chrissy Teigen.

So why should you love them even more? Because recently they released a Tweet saying that they would give “at least 1% of our income to Indigenous groups.” House House are doing this because they believe that “our videogames are made on stolen Wurundjeri land.” 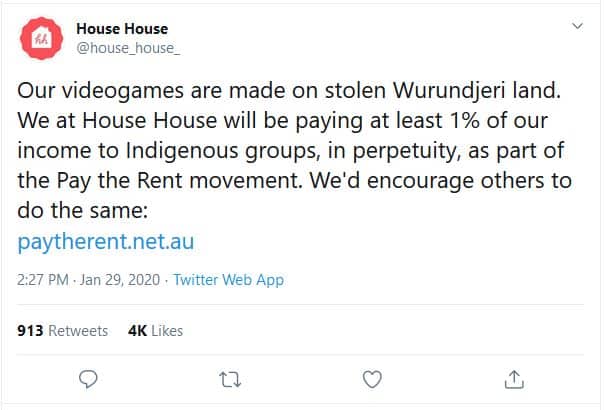 With another Australia Day having just gone by and Indigenous people and those who support the “change the date” debate protesting around the country, it is a well timed announcement by the developers. They have decided to initially support the “Pay the Rent” movement. This scheme, according to the organisations website, provides “opportunities for non-Indigenous Australians to support initiatives controlled by the traditional land owners in their struggle for self-determination and economic independence.”

Fans of the Untitled Goose Game developers have applauded their decision with many saying this has only made them respect the devs even more. House House has provided links through their Twitter of other Indigenous groups they will be donating to and how people can support each. Wherever you stand on the “change the date” debate it is always nice to see successful Australians paying it forward and giving back to their community.