Pocket Dungon’s gameplay is a fairly big departure from previous Shovel Knight entries. The game is similar to a falling block puzzle, where the player controls Shovel Knight as he interacts with enemies and items by bumping into them. He can maximise his effectiveness by grouping foes together for massive chain attacks. Players can also equip Shovel Knight with items and equipment to prepare him for any encounter. Familiar bosses and locations from the original Shovel Knight also appear.

In addition to a Story Mode, Shovel Knight Pocket Dungeon will also include a competitive multiplayer mode. This mode will allow the player to play one of over 10 playable heroes from the game, each with their own unique power and play style. More games modes are also said to be included, but we will need to wait for more information. Shovel Knight Pocket Dungeon does not yet have a release date, but Yacht Club Games will be showing off their progress at PAX East along with a playable demo. 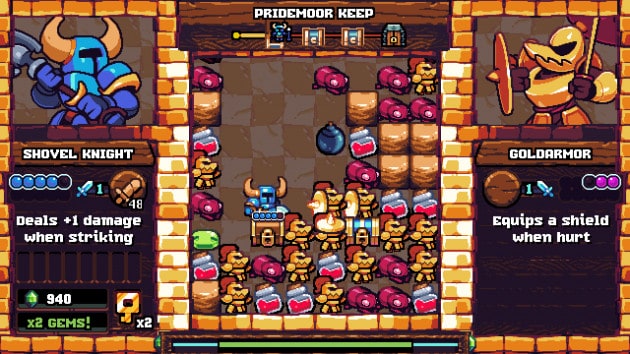 The main Shovel Knight platformer series may be finished with the recent King of Cards campaign, but it’s clear that Yacht Club still has many plans for the Blue Burrower, and the world they’ve created for many years to come.