Speaking Simulator is an awkward conversation about android infiltration

There are not many titles that overthink their subject matter in the same way Speaking Simulator does. But, in a weird way, overthinking it makes perfect sense. Speech comes so naturally to us. We so rarely think about what we say, or what goes into saying it. Just the word “hello” has a lot going on. When I say that word, my lips will first stretch out, and then pucker into an O shape, my tongue will touch the back of my teeth, and my jaw will flap. That’s a hell of a lot of movement for such a simple word. And while it’s something that comes naturally for us, from the outside it’s needlessly complex and kind of insane. Speaking Simulator embraces that insanity. It’s absurd, but so is a conversation.

The game’s premise is all about artificial intelligence mimicking human speech patterns. It released onto PC and Nintendo Switch just yesterday and I’ve had the opportunity to give the game a crack and see if it’s able to talk the talk. 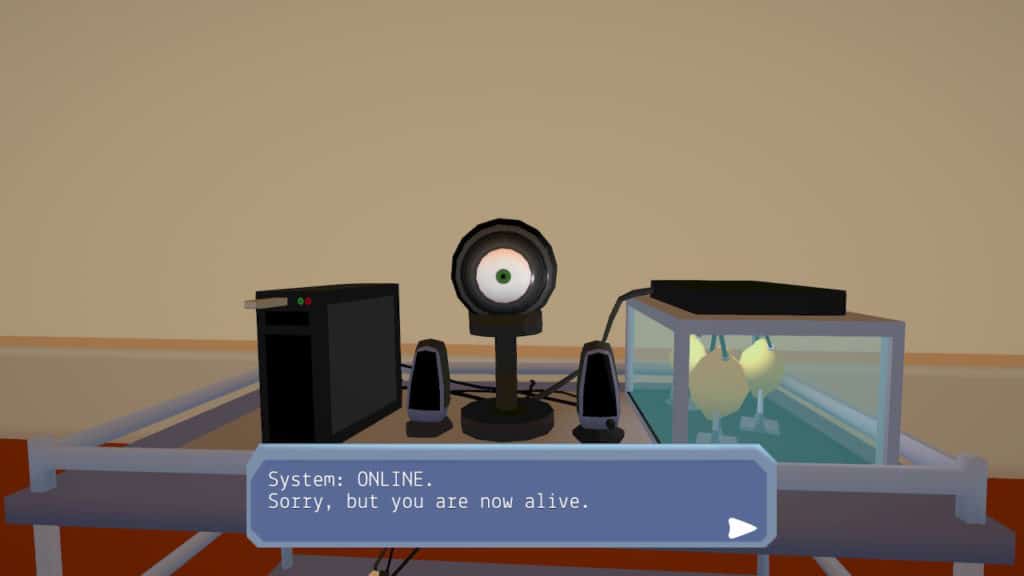 The game comes to us from Brisbane developer, Affable Games. The studio brought this strange experience to PAX Aus for the last couple of years, delighting expo goers with its absurdity. We even got an opportunity to interview a member of the dev team to find out more about this odd title. During the interview, one of the game’s developers, Jordan Comino, said Speaking Simulator was inspired by “a mix of the hilarity of watching AI’s trying to learn to speak, as well as seeing CG monsters speaking human languages.”  And that’s definitely an apt way to describe the game.

In Speaking Simulator, you play as a robot. Your job is to infiltrate human society and destroy it. You and your fellow robots would have done this already, if it wasn’t for one pesky obstacle – human speech. So, to successfully infiltrate and dominate mankind, you need to learn how to talk. And not just learn it but master it. To that end, you’ll be climbing the corporate ladder, going on dates, and running for president. It’s all in a day’s work for a humanity destroying robot.

The scenarios you find yourself in lend themselves well to comedy, and the game leans into it heavily. Every situation you find yourself in gets increasingly ridiculous. They range all the way from a best man’s speech to a nation address, and everything in between. The more you progress, the more ludicrous the game gets. One of my personal favourites was the level where you harass a co-worker while they’re on the toilet. The scenario is peak absurdity while also being somewhat relatable. Who hasn’t been worried their boss or manager is going to corner them while they poop?

And then there’s what happens when you mess up. Have you ever been in a conversation where you felt like everything was falling apart? Well in Speaking Simulator that happens literally. Noses start spinning, ears start popping off, eyes start falling out, and the smoke seems to pour from everywhere. You fall to pieces as the conversation does, and there’s a certain poetry in that.

The controls start off simple. Right off the bat you’re given control of stretching the mouth and moving the tongue. You need to stretch the mouth in the correct order, while hitting the correct buttons inside with your tongue. It’s easy to get the hang of and I found myself breezing through the first few levels. You also have around 7 seconds to do all the movements necessary for the word. The more inputs that are required, the more time it takes up. You’re also graded based on speed and fluidity. I was never quite able to work out the scoring system, but I got by.

As the game progresses, it’s easy to quickly become overwhelmed. More upgrades and more progression means more buttons you need to press and things you need to keep track of. This can unfortunately get frustrating real fast. The fun from earlier was getting sapped for me as the game turned from silly laughs to a whole lot of busywork, which, unfortunately, started to distract me from those silly laughs. It all became a bit too much by the time I needed to keep track of my eye movement, mouth, tongue, and emotional expression. Did I remember to smile? Am I moving my eyes enough? Am I moving them too much? Levels became lessons in perseverance and what once would take me a few moments to complete now needed repeated attempts.

I’ll be perfectly honest, this kind of game isn’t always my thing. The kind of wild and uncontrollable nature of games like QWOP and Surgeon Simulator haven’t always landed for me in the past. But here in Speaking Simulator I had some fun, at least initially. It wasn’t something I could sit and play for hours, but it was certainly good for short bursts of gameplay. I’d find myself pulling out my Switch on the bus, down the street, wherever I had a few minutes spare. Often there would be moments I would get a frustrated with the controls or the gameplay, but it didn’t ruin the entire experience.

If you’re looking for a short game with some wonky physics, hilarious dialogue, and you don’t mind being a little stressed at times, then Speaking Simulator could well be worth a look in.