It appears that there is a new Crash Bandicoot game in the works, entitled Crash Bandicoot 4: It’s About Time. The title and box art have been leaked by the Taiwanese Digital Game Rating Committee, which reveals that the game will release on Playstation and Xbox One initially.

The listing for the game, translated into English, reads as follows: ‘Crash is relaxing and exploring his island in his time, 1998, when he finds a mysterious mask hidden away in a cave, Lani-Loli. The mask is one of the Quantum Masks and apparently knows Aku-Aku, Crash’s mask friend! With the Quantum Masks returning and a Quantum Rift appearing near our heroes, they decide to bravely head through to different times and dimensions to stop whoever is responsible.’ Box art for the PS4 and Xbox One versions of the game have also leaked along with the listing: 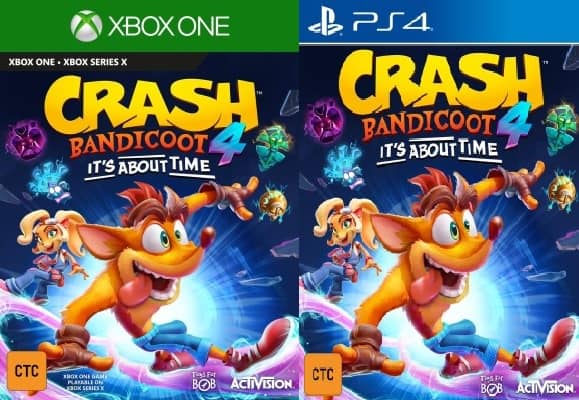 In addition to the box art, some (fairly blurry) screenshots have also leaked online. These show both Crash and Coco Bandicoot as playable characters. Different costumes will also be available, both in-game and from buying the game digitally. Even with the low resolution of these leaked screenshots, the colour palette is suitably vibrant, with plenty of crates to smash and Wumpa Fruit to collect.

Crash Bandicoot is having something of a renaissance lately. Following the smashing success of the Crash Bandicoot N. Sane Trilogy, and subsequent Crash Team Racing: Nitro-Fueled, a canonical, all-new successor was inevitable. The name seems to de-canonise The Wrath of Cortex, the previous platformer sequel to the original trilogy on the PlayStation. Toys For Bob, the developers that worked on the N. Sane Trilogy and the Spyro Reignited Trilogy, are set to develop Crash Bandicoot 4. While PS4 and Xbox One versions are the only ports confirmed, it would not be surprising if it comes to PC and the Switch later on.

While the Crash license has been handled by a number of developers since it left Naughty Dog’s hands, the developers of the N. Sane Trilogy proved that they understand the core of what makes a good Crash game. They even showed what kind of original Crash content they can create with Future Tense, an all-new level added into the N. Sane Trilogy. Some additional leaked information reveals an October 9th release date.

It’s almost TIME. More info on our next game is coming June 22!

Toys For Bob have indicated on Twitter that they will reveal more information on June 22nd, which will likely officially announce the latest game in the franchise. If the recent Crash Bandicoot remasters are anything to go by, it seems like this series is in safe hands.