Deadly Premonition 2 is certainly a quite broken game that released last week. With poor performance and weird as ever moments (much like the original), you can see reason for its current low Metacritic score. These are problems that have yet to have be addressed in the sequel. However, there is one change that the creator of the game Swery (Hidetaka Suehiro) wants to address real soon: the problematic depiction of a trans character.

In the week since the game’s launch, the creator has received a fair amount of criticism for treatment of said trans character. This character has their deadname (a trans person’s name assigned at birth prior to identifying as trans) mentioned on multiple occasions by different characters. It’s a tale as old as time that we’ve seen in games as recent as The Last of Us Part II. Swery has taken to twitter, acknowledging this, and wants to right this wrong in their own game.

In a tweet aided by Google Translate, the creator said the following, along with an accompanying explanation image:

“Good morning everyone. I need to tell you about my apologies about DP2. So I wrote message by myself with Google-sensei. Please forgive my poor english skills. SWERY” 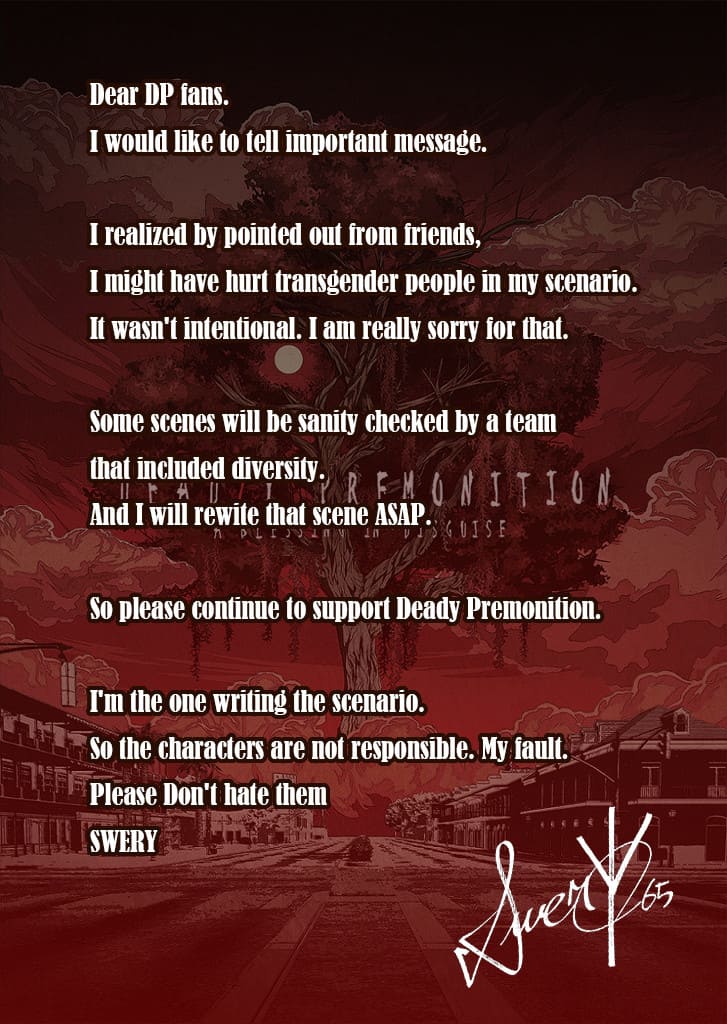 As a trans person, I understand it’s easy to find yourself in messy grounds when you don’t hire a trans person to write a trans character. The depiction and treatment certainly doesn’t seem egregious by any means either. It comes, knowing that not only the trans community but the LGBT+ community as a whole, still has some more messy connotations and beliefs around it in non-Western countries. It’s how controversies have risen up in games like Catherine: Full Body. Still, with Swery also a Japanese developer, it’s nice to see him open to change and even including this representation fix a priority. Come on, Atlus, follow suit!

Changes have yet to have been made for the Deadly Premonition 2 character. Understandably, Swery and the development team likely have a lot on their plate as is. We’ll be sure to update you on any changes when they arrive.