There is no doubt that one of the years biggest releases, besides Cyperpunk 2077 is Halo Infinite, but the recent gameplay that was shown at the recent Xbox Games Showcase was met with some mixed comments.

Halo Infinite was front and centre at the Showcase, providing us with our first look at the gameplay and world we can expect, but this footage was met with some criticisms. Most of the negative reactions were due to the game not looking truly “next-gen”, and that it seemed flat and underwhelming in contrast to what was hyped up.

As a result, there is a tonne of memes out there lampooning the graphics, with the greatest being the “Craig the Brute” memes. I have inserted one below for your amusement. 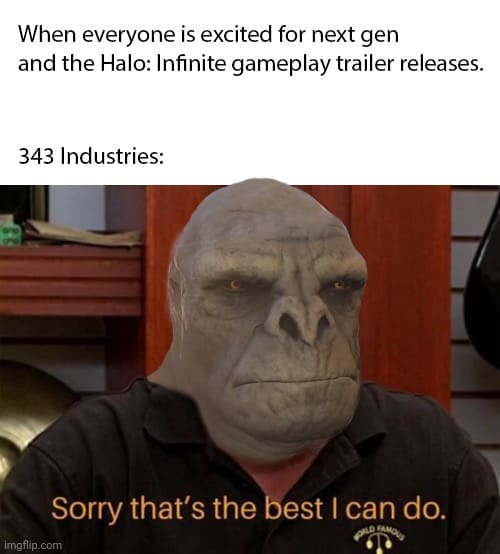 In response to Twitter user @jassem73, Narrative Experience Director Dan Chosich explained that “I’ve been in your shoes” and “I want you to know your voice matters”.

I’ve been in your shoes. I know what it's like to have expectations built + feel let down. I want you to know your voice matters + is heard. You're not falling on deaf ears. I always want to live up to the legacy that Bungie pioneered. I personally care a lot about honoring that.

“Negative feedback [regarding visual fidelity] includes comments around characters and objects appearing flat, simplistic and plastic-like, lighting feeling dull and flat, and object pop-in. We’ve read your comments, we’ve seen the homemade examples of retouched content, and yes we’ve heard the Digital Foundry assessments. In many ways we are in agreement here – we do have work to do to address some of these areas and raise the level of fidelity and overall presentation for the final game. The build used to run the campaign demo was work-in-progress from several weeks ago with a variety of graphical elements and game systems still being finished and polished.”

“While some of the feedback was expected and speaks to areas already in progress, other aspects of the feedback have brought new opportunities and considerations to light that the team is taking very seriously and working to assess. We don’t have firm answers or outcomes to share yet but the team is working as quickly as possible on plans to address some of the feedback around detail, clarity, and overall fidelity. The team is committed and focused on making sure we have a beautiful world for players to explore when we launch.”

It is reassuring to see that key people involved with the development of this hotly anticipated title are out there reading and listening to feedback that long-time fans are providing, we can only hope that the final product delivers on the promise to “…live up to the legacy that Bungie pioneered.”

This title is still very much a work in progress, so there is every chance that the footage we saw was still undergoing work and not indicative of the potential of the final release, we just have to wait and see.

Halo Infinite is due to release on the Xbox Series X and PC holiday 2020.