The Solitaire Conspiracy packs Solitaire with a spy twist

Indie team Bithell Games, who you might know from Thomas was Alone or last year’s John Wick Hex, have announced their next project. The Solitaire Conspiracy is an upcoming game, set in a near future filled with spies and supervillains. Oh, and it’s used as a setting for the studio to take on their own spin of Solitaire. Wicked.

Yes, the game is described as a Bithell ‘short,’ but it still looks to promise a boatload of content and plenty replayability. Three different modes have been announced for the game. An on offer campaign will aptly teach you of the game’s mechanics and also tell a “tightly packed story.” Meanwhile, a countdown mode will pit players in a test of endurance, facing waves of ever changing challenging decks. Lastly, Skirmish will give players “an infinite playground” to enjoy unlocked crews. 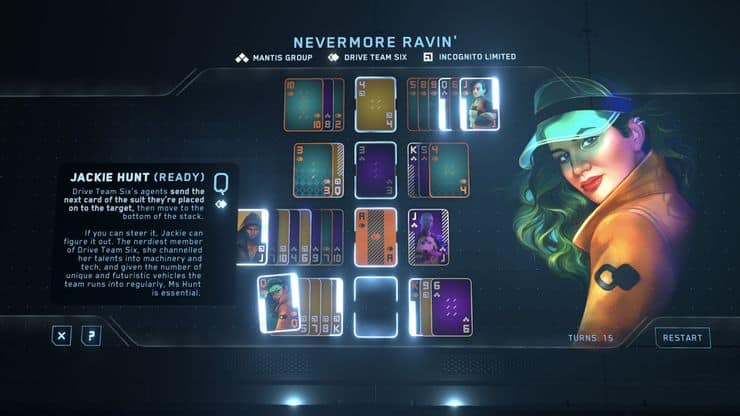 Quite the stacked personalities will also be joining The Solitaire Conspiracy in different ways. Greg Miller of podcast outlet Kinda Funny will largely appear in the game’s campaign through FMV cutscenes, along with Inel Tomlinson. Once again showing Bithell games are also serious in showcasing great music in their games, composer Jon Everist will be behind the game’s soundtrack.

All of this really is quite exciting. A cyberpunk-esque spy adventure all set within the confines of being a Solitaire-esque game? Add with that the fact it’s a Bithell game, a studio known for creating some wonderful lore and it’s a recipe for success.

The Solitaire Conspiracy isn’t far off, releasing on October 6th on PC. You can wishlist the game and see its trailer here, where the game’s description also assures there won’t be any microtransactions. That eases some worries. On an unrelated note can someone quickly teach me Solitaire over the next two weeks? Anyone?