Finally, after rumours and leaks and honestly just a lot of hoping and praying from my side, we have firm details about the launch of the Xbox Series X and Xbox Series S. It all started late last night, when this tweet revealed the official release date, Australian price and pre-order start date.

The Xbox Series X will be $AU749/NZ$799 and the Xbox Series S will be $AU499/NZ$549, launching on November 10th. Pre-orders will start on September 22nd, and while you’ll likely be able to pre-order at all sorts of retailers, EB Games have jumped in with some information on what to expect – which is especially important for Melbourne-folk that are still currently in lockdown, that will be in effect almost right up until the launch itself.

At EB Games, you’ll have to place your pre-order ONLINE ONLY, from September 22nd. From there, you can choose delivery or click-and-collect for the launch day. You’ll also need a $200 deposit to secure your console, and a limit of one per person. They’ve also gone ahead and shared some pretty tasty trade-in deals. If you trade in your Xbox One X towards the Xbox Series X, you will get $350 off the cost of your new console. If you trade in your Xbox One S towards the Xbox Series S, you’ll get $200 off. 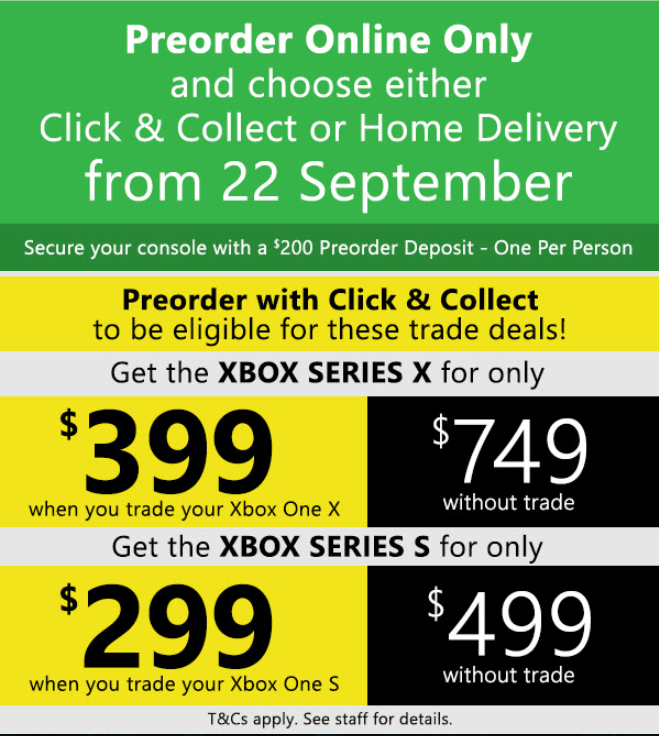 Considering the fact that you’ll be able to play all Xbox One games on the Xbox Series, and their general rhetoric of being able to play all of their games easily across platforms, this is a pretty sweet deal for those looking to upgrade. The only people that wouldn’t bother with this would be folk who want to keep the second console for another room in the house, or the hardcore collectors.

If that cost is still too much (and look, it’s a hefty hit of the budget for sure), you can also use Xbox All Access with Telstra, with pricing of Xbox Series S at $33 AUD per month (for 24 months).
and Xbox Series X for $46 AUD per month (for 24 months). This would give you a brand spanking new console and Xbox Game Pass Ultimate with an ongoing payment plan contract. But that means you’d have to sign up with Telstra, which could be more trouble than it’s worth. If you’re already with them, it’s like tacking on a new mobile phone. Either way, this is a fantastic way to get cracking on the next generation without needing $749 in the bank, so a win for sure.

Following all of that, Ubisoft have pulled forward their release date for Assassin’s Creed Valhalla. Originally scheduled for November 17th, it will now be available on November 10th to coincide with the launch of the Xbox Series X. That means it’s also our first 100& confirmed launch title for the next generation.

Assassin's Creed Valhalla launches with Xbox Series X | S on November 10, 2020.
Build the legend of a Viking raider on any console.
Upgrade from Xbox One to Xbox Series X at no additional cost. pic.twitter.com/dGukVP5U8g

The hype train has left the station; after months of anticipation, Xbox have finally shown their hand. Two consoles, both offering different benefits. Pricing for both. Release date November 10th. Pre-order September 22nd.