A mod in the ever-controversial Cyberpunk 2077 that allowed players to swap models and have sex with characters based on real-world likenesses such as Keanu Reeves has been removed.

The mod let players swap characters into explicit sex scenes who usually shouldn’t be there, for example, in place of the sex workers that hang around in Night CIty. This has been done with characters like Keanu Reeves’ Johnny Silverhand and even the game’s antagonist, Adam Smasher (which, considering his role in the game, is hilarious to watch). It’s worth noting that the dialogue and animations remain the same as the “Joytoy’s”, so it does make for an awkward-looking encounter to say the least.

Despite how busy they must be trying to fix all of the issues with Cyberpunk 2077, CD Projekt Red have stepped in. While they said they permit modders to “tweak the game at will and have fun” with characters the studio has created from scratch, they say it’s a different story for characters that are based on real people.

“Our most important rule regarding user-generated content, game mods in particular, is that it can’t be harmful towards others,” CD Projekt Red told Eurogamer in a statement. “In the case of model swaps, especially those that involve explicit situations, it can be perceived as such by the people who lent us their appearance for the purpose of creating characters in Cyberpunk 2077. 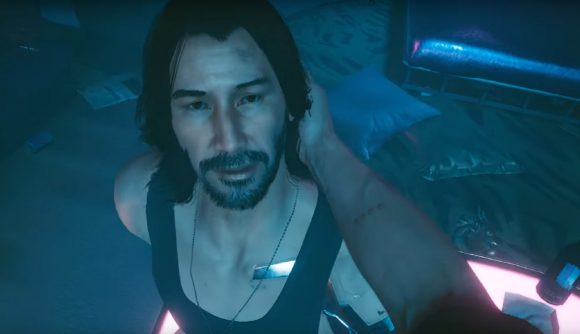 “Therefore, when making fan content, creators have to make sure they’ve got permission from all the concerned parties (which might be people other than CD Projekt Red). For the characters we’ve invented for the game, we broadly permit you to tweak the game at will and just have fun. When it comes to models of real people whom we’ve asked to participate in the game, we kindly ask you to refrain from using them in any situation that might be found offensive if you don’t have their explicit permission.”

Looks like you’re going to have to get permission from Keanu Reeves himself to have sex with Johnny in-game. Let us know how that goes? It’s certainly reasonable that somebody who lends their likeness to a video game (or any other project) would prefer if it’s only used as intended. As “harmless” as it may seem, there is something a little bit wrong with having sex with celebrities like this without their consent, even if it’s in-game.

It’s interesting for a developer to step in and push back on a mod in this way; the modding community has only grown in recent years, and considering the explicit content found in Cyberpunk 2077, something like this was bound to happen, and happen fast. We’ll see if other mods have a similar impact in future.