Crowdfunding has been a reliable and handy way for niche projects to find funding from small but passionate fanbases. Retro-inspired video games, in particular have been served well from sites like Kickstarter, including Bloodstained: Ritual of the Night and Mighty No. 9. A recent Kickstarter success, The Shapeshifter, goes the extra mile by producing actual Game Boy cartridges, and being exclusively available via an emulator. The project was fully funded in just 12 hours, with an eventual stretch goal of producing a NES version as well.

You play as Elliot, who falls asleep near the campfire and is woken up by a mysterious elf. The elf requests Elliot save their world from the wizard’s spell, and grants him the ability to transform into any animal he touches until the next dawn. The player must solve problems with Elliot’s new shapeshifting powers and explore this dangerous new world. This is Green Boy Games’ most ambitious project yet, providing save game functionality and more content than their previous games.

What separates The Shapeshifter from other retro-inspired crowdfunded projects is just how much developer Green Boy Games is committing to the whole “retro” aspect. According to the developer, his games “are sold and distributed mostly in physical cartridge (not ROM) since the main idea is to keep alive the spirit and gameplay of this legendary console.” Up to 100 backers can qualify for a Game Boy cartridge of the Shapeshifter, with each copy having a unique number and signature. However, backers can also receive ROMs of the game to be played on a Game Boy emulator. 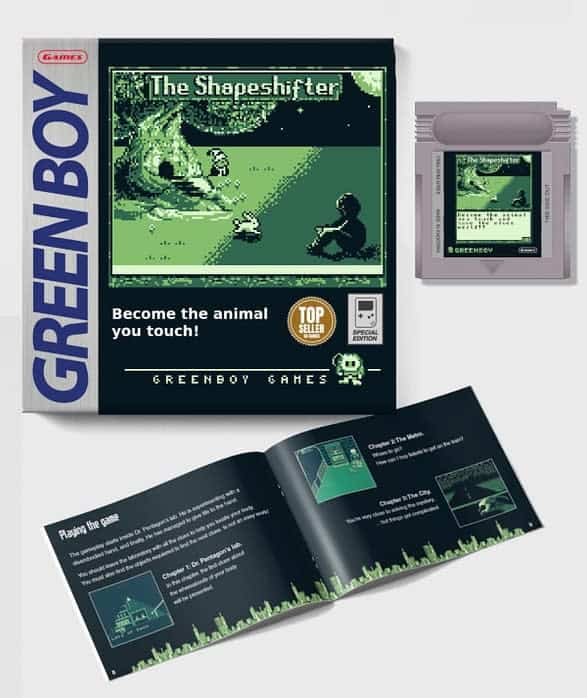 The success of the Shapeshifter shows that there are enthusiasts out there keeping these old consoles alive with new games. Similar projects include one team’s effort to port Minit onto the Commodore 64. There may not be that many gamers out there who still have functional 30 year old Nintendo handheld consoles. If you do, however, this is a title to look out for if you want a new game to add to your collection.

Currently, the Game Boy port has been fully funded. The final stretch goal for the Kickstarter campaign is a port for the Nintendo Entertainment System. The Shapeshifter is set to launch in May 2021. At time of writing, the campaign is still open for another 58 days, so anyone interested can back the project here.