The Elder Scrolls Online: Blackwood – everything you need to know

The Elder Scrolls Online: Blackwood is the upcoming fifth chapter for The Elder Scrolls Online (ESO), releasing 2 June for PC and 8 June 2021 for consoles. We were lucky enough to be invited to a press event and play an unfinished build of the newest annual chapter of this enormous MMO. If it’s anything like last year’s chapter, there’s going to be an outstanding amount of content. Speaking with Steve Ruygrok (PR Manager) and Richard Lambert (Creative Director) at ZeniMax, we got every nitty-gritty detail for interested first-timers and veterans alike.

Return of the Daedric Prince

ESO: Blackwood is set in southern Cyrodiil and the borderlands of Black Marsh. The Elder Scrolls fans will find the cities of the DLC very familiar, harkening back to some areas of The Elder Scrolls IV: Oblivion. A large town with Germanic architecture called Leyawiin will serve as the major player hub for Blackwood, where adventurers can begin major story quests, purchase from vendors, and group up. Gideon is another town featured in the upcoming DLC, controlled by Argonians and hidden within the swamps of the Black Marsh. Throughout the Blackwood region, Imperial and Argonian political conflict is making life difficult, and players will need to navigate through this… as well as the overwhelming Daedric threat.

The big-bad of this year’s chapter is the Daedric Prince of Oblivion named Mehrunes Dagon, the main antagonist of The Elder Scrolls IV: Oblivion. With a liking for destruction, change, revolution, energy, and ambition, Dagon attempts to invade Tamriel once again and it’s up to the adventurer to stop the demonic monster. Don’t worry – you’re not doing it on your own.

Along with the Daedra are brand new Oblivion portals that serve as world events. These take place in the open world when exploring, similar to the dragons in Elswyr and rifts in Greymoor. Players will need to focus their efforts against the invading Daedric threat and then enter the portals. Inside, the vicious Deadlands holds even more Daedra to defeat, as well as dungeons and plenty of loot and challenging encounters. 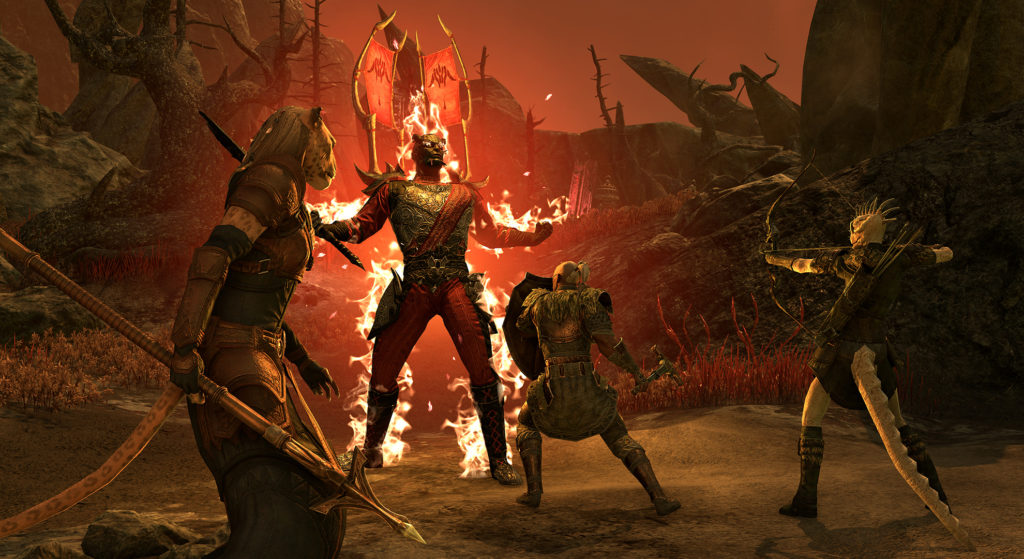 Companions to help you on the adventure

One of the biggest changes ZeniMax is making to the ESO formula is the addition of companions. These NPCs act as followers to your adventurer that can be individually trained to be healers, tanks, or damage dealers. They can also replace real players in multiplayer dungeons – meaning you can run a four-player dungeon with two people and two AI. Although the new chapter will only come with two new companions at launch, Richard Lambert believes the team will be releasing many more in the future.

There is a rapport system that defines how your companions will react to you. Each has their own dislikes and likes, and depending on your actions you may see unique quests, perks, and responses from these characters. For example, a noble companion will not be happy with your pickpocketing sprees and may shun you as result.

Companions also come with their own gear, costumes, mounts, and traits. These will drop independently to normal gear that a player can equip – but only when you are playing with a companion in your party. To actually get them to join you in your adventure across Blackwood and beyond, players will need to complete their initial storyline objectives. After that, they will be able to quest with you and you can delve deeper into their background through additional side stories.

ZeniMax is also introducing a new activity and currency, in case you needed more things to do in ESO. Endeavours are new daily tasks or objectives that players can complete to earn Seals of Endeavour. These Endeavours aren’t anything complicated and will likely be completed during normal questing and raiding, such as killing 10 skeletons or completing three side quests. When you earn Seals of Endeavour, they can be exchanged to directly purchase crown crate items. This is the first time any in-game currency that doesn’t require microtransactions will allow players to purchase otherwise exclusive cosmetics. No real-world money needed. This does, however, raise the question as to how this will affect the value of these items in the market space. 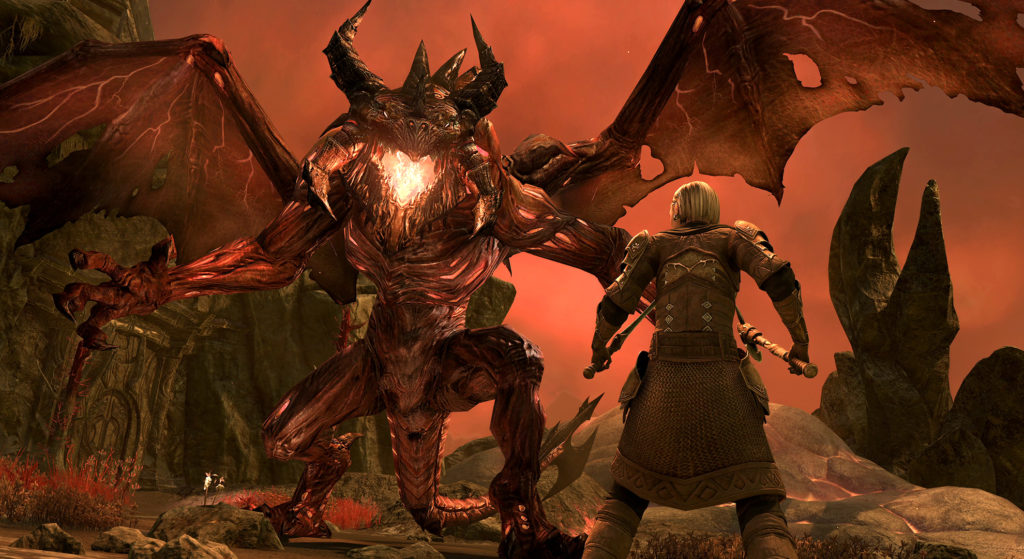 For the Elder Scrolls Online players who love trials, there is a new addition! The Rockgrove trial lets up to 12 players fight through an onslaught of foes and three unique bosses. Argonians are being attacked by Daedric worshippers, and the players are tasked with helping them fend off the threat. Rockgrove is geared towards high-level, veteran players and also includes harder difficulty modes if you’re party really wants a challenge. It includes new gear, titles, achievements, and cosmetic drops including one new mount that isn’t going to be easy to get.

There are some quality of life changes coming as well, such as better voice chat and allowing perfect and non-perfect sets to work together. Unfortunately, there aren’t any PVP additions to this chapter. Lambert explains that Elder Scrolls Online is abundant with content and the more they add will continue to hinder its performance. The development team wants to focus on balance, new players, cosmetics, and item sets – and they can’t add everything without being over-encumbered.

That’s one of the most obvious things that Elder Scrolls Online: Blackwood really demonstrates – new player accessibility. There are several terrific changes that will help first-time players ease into the experience. A new tutorial allows players to choose their own path and decide which starting area and chapter they want to quest through first. It will be more intuitive and much quicker than previous, allowing new characters to quickly get started but not be overwhelmed by the size of this now seven-year-old MMO.

Speaking of old, the game is getting an enhanced edition for the PlayStation 5 and Xbox Series X|S. This includes visual upgrades and performance updates, such as improved depth of field, antialiasing, textures, and loading times. Water surfaces will reflect more naturally against light and shadows and two new performance modes will be added. One for high-definition that will run the game in 4k and 30 frames per second, and the other which optimises for 1080p and 60 frames per second.

That’s the HUGE deep dive on the new Elder Scrolls Online: Blackwood chapter, releasing 2 June 2021. With over 30 plus hours of quests, new Oblivion portal events, a difficult 12-player trial, two charismatic companions, a whole new devilish questline and more – it’s not hard to say this is one of the biggest games available to date.