Stranger Things DLC to be removed from Dead By Daylight store

It seems it’s not just the upside-down that’s looking to claim new victims! Dead By Daylight players will soon see the Stranger Things chapter leave the store for good. After almost 2 years, Nancy, Steve, and the indomitable Demogorgon will be departing from the in-game store along with the Hawkins National Laboratory game map that will be removed from the match rotation.

Nancy, Steve, and The Demogorgon are leaving the Dead by Daylight store in November, but we're not ready to say goodbye just yet.

Take part in their legacy before they go – details here: https://t.co/mR2pUJkrOz pic.twitter.com/BMOq1PsE3f

Don’t worry if you haven’t got your hands on the Stranger Things content yet, you’ve still got till November 17th, 2021 before they’ll be removed from the store. Players who do own the content should note that they will still retain the content they have paid for and it will continue to be playable as usual after the chapter leaves the store. Their perks will also continue appearing in the Shrine Of Secrets, they just will no longer be attributed to the licensed property.

This news comes on the eve of Dead by Daylight’s new chapter announcement which is speculated to be inspired by 80’s horror flick Hellraiser, suggesting Stranger Things is just a little bit too similar a vibe. We already know that we’ll be receiving the new killer first and then mid-chapter the survivor will be released. After the Resident Evil Chapter, it’s going to be interesting to see what the developers are bringing to the game next.

Back to the upside-down Stranger Things goes!

It’s going to be really sad to see this content become unavailable to new players. I know for myself that the Stranger Things chapter played a big part in my getting into the game. I’ve had it since day one! Stranger Things was a familiar show that gave me a reason to play the asymmetrical multiplayer game because I could be characters I’m invested in as I play with friends.

As if preparing to say goodbye to the characters was hard enough, we’ll also be losing Hawkins Nation Laboratory – a map that has certainly seen more than its fair share of close calls and killers causing chaos or the dreaded hatch dash. The next few months will be bittersweet playing on the map. 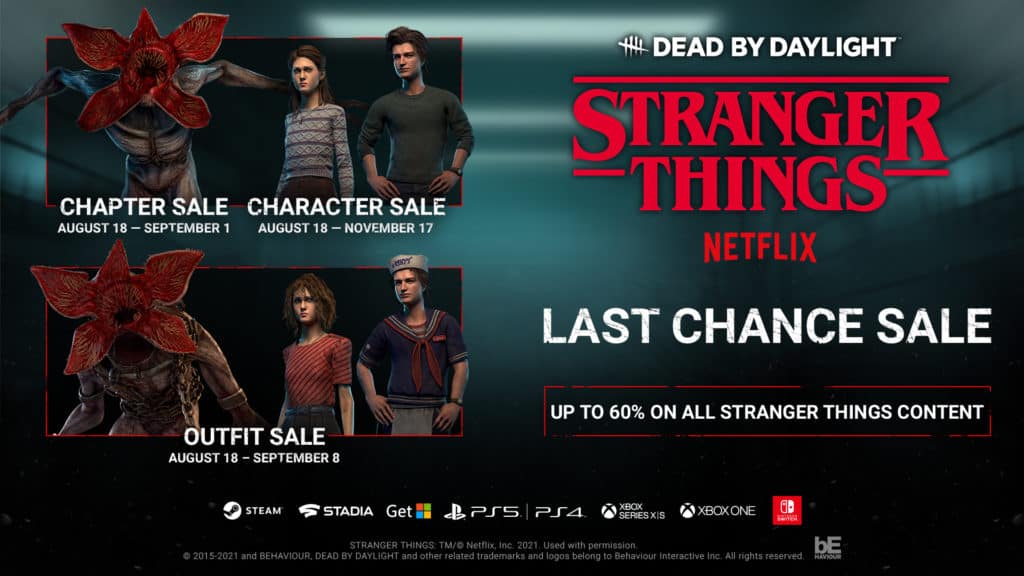 If you are looking to get your hands on the characters fear not. The Stranger Things chapter will be on sale on all platforms for 50% off from August 18th to September 1st. The individual characters will be half price on Dead by Daylight’s store from August 18th till November 17th, just don’t forget to grab any of their outfits before September 8th for half price. I’m a huge fan of Steve Harrington in his iconic Scoops Ahoy uniform so definitely don’t miss out on any of your favorite cosmetics before they leave the store and you miss out for good!