Lost Judgement, the sequel to 2019’s Judgement, will be hitting the shelves on PS4, PS5, Xbox One, and Xbox Series X|S later this month. But Sega has already revealed its plans for a DLC roadmap for its newest title, including new story elements, a new fighting style, and cosmetics. 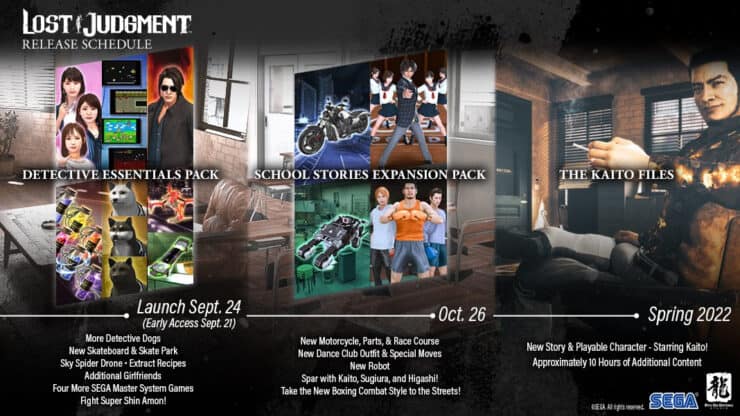 First up is the Detective Essentials pack, which will become available on launch. This adds a few cool new things to the game, such as some extra Sega Master System games that the protagonist Yagami can play at his office, more detective dogs, and more girlfriends. It also adds a new skate park and skateboard, a sky spider drone and extract recipes, and a fight with Shin Amon.

Then on October 26 comes the School Stories expansion, which brings even more fights, and even a new Boxing fighting style. A new race course and dance club will be available, along with new outfits and a new robot.

Finally, in Spring 2022, it’ll be time for Yagami to step aside and let his partner Masaharu Kaito into the spotlight in The Kaito Files, a brand new story that Sega says will add about 10 hours on gameplay to Lost Judgement. Players will be able to control Kaito as he has an adventure all of his own… although Sega has not revealed exactly what kind of story this will be.

For those who ordered the Digital Deluxe or Ultimate Editions, Lost Judgement releases September 21. For everyone else, it will release on September 24.