RAVE Reviews has undertaken a fun study – what are the most hated companies in the world, and where are they most hated? The study focussed on Twitter: which companies are we tweeting about most, and is that attention positive or negative? The study covered many kinds of topics like fast food companies and big tech brands, but of course, the one that interests us is gaming discourse. Which gaming company draws most of the world’s ire? The answer will probably not surprise you: it’s Ubisoft.

RAVE used a reacher tool called SentiStrength to search for tweets from various locations mentioning certain brands, and then assessed the percentage of “hate”, or negative tweets. What it doesn’t tell us is what the common criticisms are. 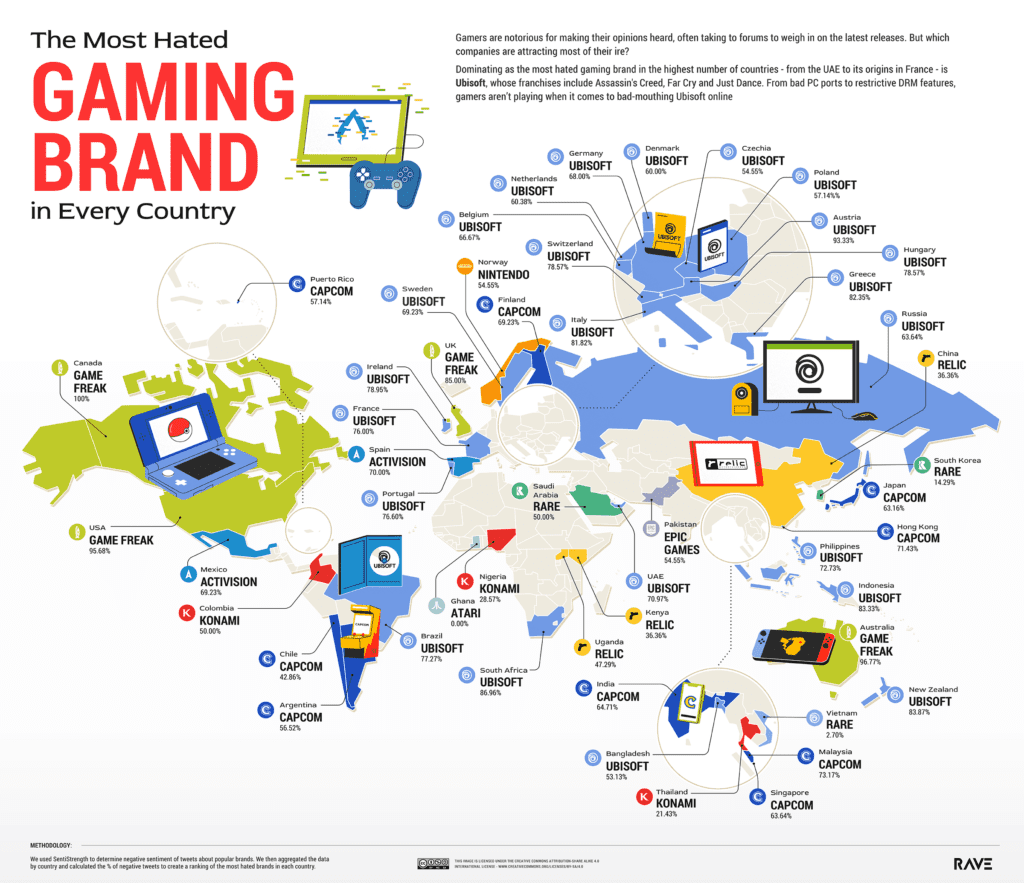 The data revealed some surprising things. For example, we can see that Nintendo only appears once on this chart, for Norway. What does Norway have against Nintendo? Another surprise appearance is two appearances by Rare, the developers behind Banjo Kazooie and Yooka Laylee. We in Australia seem to have a particular distaste for Game Freak, while Canada has us beaten with a whopping 100% negative rate for the same company.

Ubisoft has certainly had some very negative press over the last few years, so it’s not too much of a surprise to see it topping this list. As well as having a reputation for churning out repetitive and formulaic titles, the company has been hit with multiple and ongoing allegations of misconduct towards its employees. These allegations resulted in only some of the alleged bad actors parting from the company, and according to a report by GamesIndustryBiz, there is little evidence to show that the company maintains what is clearly an ingrained culture of keeping their employee’s heads down and pretending that nothing is wrong behind the scenes.

Yet, these types of allegations don’t seem to be what has most gamers irate. Activision Blizzard, a gaming company that is actively being sued by an arm of the United States government for the same kind of misconduct, appears only twice on this list. If allegations of misconduct were the cause of so my Ubisoft hate, it seems likely that Activision would appear on this list far more than that. It’s a sad realisation that despite all the speaking out against ‘frat bro culture’, what gets most gamers angrily tweeting is when their video game sequel is a little bit disappointing.

The study does not provide any specific dates regarding when this data was collected, so it’s conceivable that it was before these new allegations hit Activision. The study was first reported on 1st October 2021.