Now that we’ve had some time to get used to the new island in Fortnite, it was only a matter of time before a new season began. And this isn’t just any season, the resistance against the Imagined Order, a hostile group of NPCs, is threatening to wage a war against The Seven. Blimps are floating in the sky, tanks are ready to roll, and suddenly the plans to build in-game have been stolen.

I am really loving this slick aesthetic for the new battle pass, featuring a whole new collection of skins, gliders, wraps, and back-bling. It’s wild that we’re only in season 2 of the third chapter and already a war has broken out. Admittedly, the timing feels less than ideal with current world events, but at least the message of the season is quite succinct in its support of the resistance, choosing to base the whole season around it as a theme

Mobility has also undergone another update. Manteling and sprinting have been added which is such an insane new addition to the game meta from a mobility standpoint. Sprinting functions on a stamina bar, giving you a few seconds of speed. The manteling functions as a way to climb up levels allowing you to avoid having to build, but it also means you can leap over enemy builds with ease. It’s making the game feel very similar to the likes of Apex Legends and Call of Duty Warzone, but it’s in that animated style we know and love. The building mechanic is also turned off while players get used to the new changes which has been an awesome chance to see what the games are like without building. 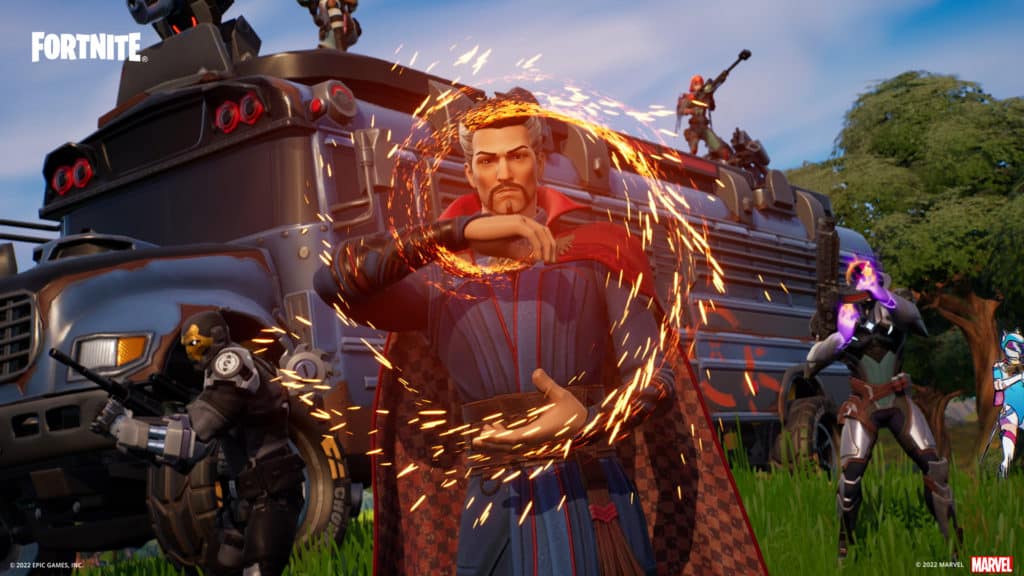 Doctor Strange is even joining the game which honestly has me even more hopeful that we’ll be getting a Scarlet Witch skin sometime soon which I would absolutely die for! That said, Strange is a very detailed skin and his emotes are looking like something straight out of the Marvel Cinematic universe. This is obviously a coincidence and has nothing to do with the new Doctor Strange in the Multiverse of Madness film coming out in early May.

Epic Games has also pledged to donate two weeks of earnings from the game and in less than 48 hours they’ve raised $36 Million USD to the humanitarian relief in Ukraine. It’s so great to see a game as big as Fortnite giving generously to those affected.

I feel like I say this every single time I write a new season article, so I guess I’ll say it again! If you are thinking about playing the new season BUT haven’t because of the building – then maybe you should jump in NOW while the building is turned off and check out the new updates available across all platforms.