Goodbye to Chapter 2, and let’s say a big hello to Fortnite Chapter 3, Season 1! In an intense conclusion to Chapter 2, we saw the cube queen summon the aliens as she launched her final assault. Luckily though, none other than The Foundation returned to save Jonesy from a particularly hairy situation with Doctor Sloane below the island’s surface just in time. The Foundation is played by none other than Dwayne “The Rock” Johnson, yup – you read that right. You can see a recap of the event here if you missed out!

The Foundation set events in motion that have now flipped the island, revealing a totally new map much like what happened after Chapter 1’s conclusion. The new map features many callbacks to both of the previous maps as well as some new areas that look amazing. I’ll explore those later in this piece.

Chapter 3 looks set to be another impressive return to form for the animated battle royale game. The new map couldn’t have come at a better time, with the last one beginning to feel the effects of 8 seasons from the previous chapter. Now that the formalities are out of the way, let me show you what’s new this season!

This new map is truly something. It’s somewhat familiar yet totally different from either of the last two maps. Among the new areas, you’ll find the iconic Daily Bugle from Spider-Man. A group of several buildings surrounded by webs, more evidence of our spider friend coming to the game in case it wasn’t already clear. 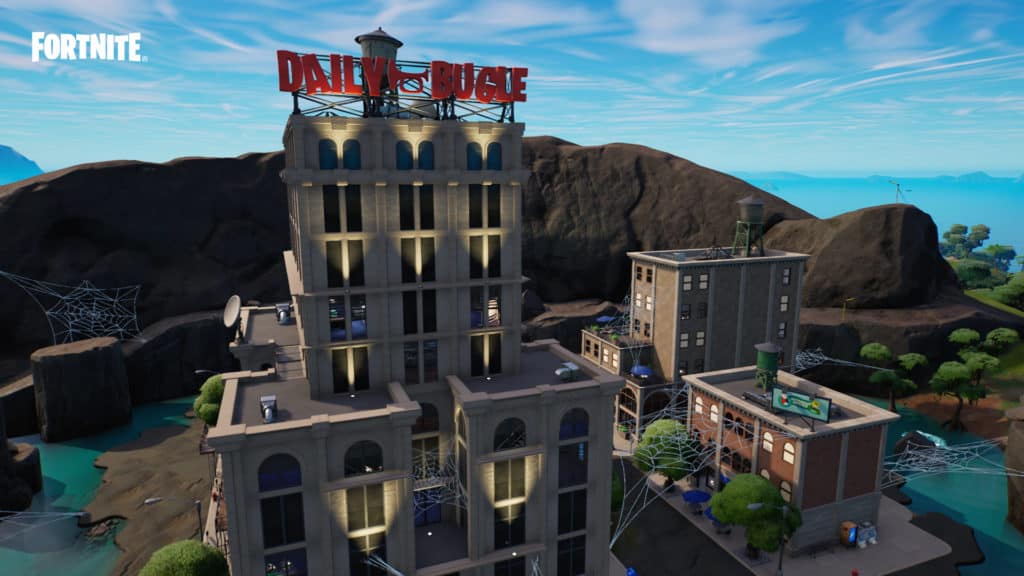 Long-time players will also recognise Shifty Shafts and Greasy Grove. Definitely some interesting choices I wouldn’t have guessed for returning POIs. Risky Reels is also back but it’s now a new Rocky Reels variant. There’s also a very familiar city buried beneath the snow near the centre of the map… it appears Tilted Towers is back and will be slowly uncovered by snow as the season progresses.

The new mechanics and game changes 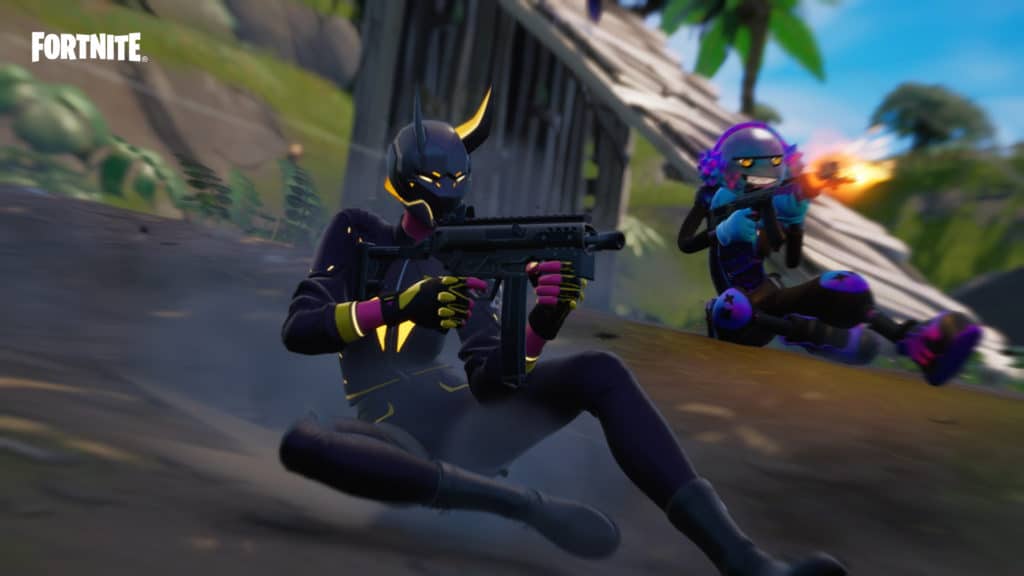 Sliding is here – As with most free-to-play shooters, Fortnite has followed and added a sliding mechanic much like Apex Legends. It allows the player to slide down hills at a faster pace than before while being able to fire on enemies. To slide, players must hold the crouch button. For me, using a controller on PS4 meant I was having to hold down one of the analog sticks to activate it. This felt a bit clunky so I’ll be remapping it to another button when I play next.

Down but not out – When playing in a squad, now if you’re downed you’ll be able to move faster than before while also having the ability to open doors and chests, sort your inventory, and even pick up items. Now you’ll be able to pick up that golden gun while your squad finishes the enemy off.

No more shakedowns – While shaking down enemy squad members used to be a great way to learn where their squadmates are, now they have been removed.

Better with friends, or enemies – In Chapter 3, doing things with more players means it happens faster. Reviving teammates and rebooting a van will speed up when 2 or more focus interact with the task. Vaults will also make a return, needing several people to open so you can find the loot within.

Camping – Something quite different for the game, the campsite allows players to heal and stash up to 3 weapons within. That’s not it either, stashed items can be accessed in future matches! This is crazy and honestly feels like it won’t be around long since players will hoard the good items when they’re in abundance. Certainly an interesting twist on the match item meta.

Vehicles – Just as soon as they were added, Shopping Carts and All-Terrain Karts (ATKS) have rolled back into the vault but Quadcrashers are now back and as fast as ever! There have been some modifications made to the damage vehicles receive from explosives though, so be careful.

The crowns – Now it’s not only victory royales to be coveted. For those who place high in a match, they’ll enter the next match wearing a crown. The crown shines, alerting those around you that your royalty is in the lobby, so watch your back! Winning with a crown will also award you with a emote that shows how many crowns you’ve earned. There’s even an XP bonus for those carrying the crown.

Weather – I hope this island is prepared to baton down the hatches. Dynamic weather is coming soon to the game and will see humongous cyclones touching down and lightning strikes.

Quests – After a season of searching the island for NPCs, now quests are located back on the Quests page and are viewable as Daily, Season, and Milestones. There are new season quests every week and the milestones have multiple stages. Players last season will remember that XP went from famine to feast so I think we can expect a slowed grind this season. Personally, I’ll miss finding the new characters, but this style of quest-giving will mean NPCs are harder to track down. There will also be some quests still on the island, given to you by a communication device at the new Sanctuary. Completing these quests will work towards events beyond the season and the mysteries of The Seven.

The new weapons and consumables 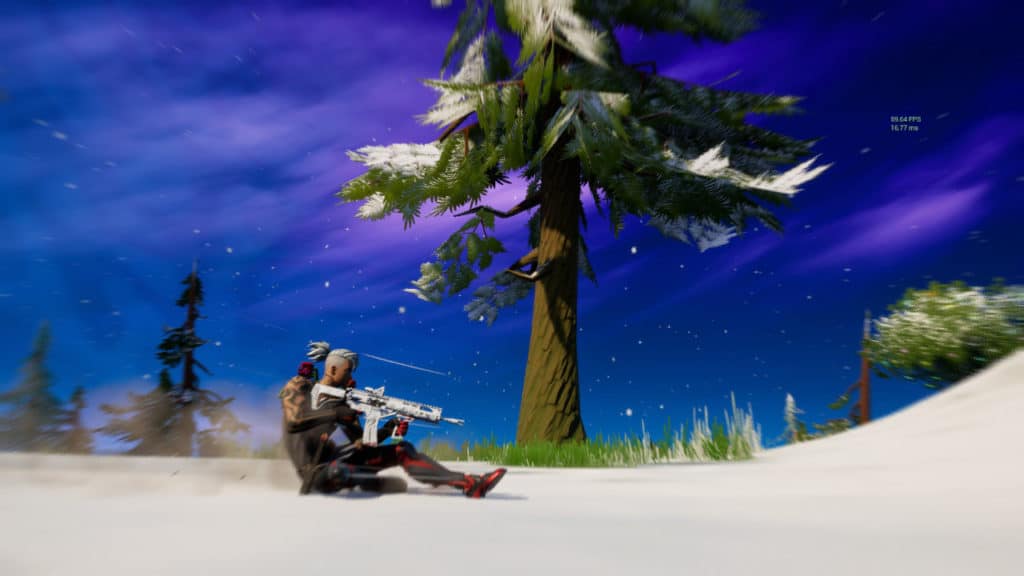 This season sees a whole new roster of items appearing on the flipped island that will take more than a few matches to learn about. Already, the long-range options this season are quite formidable. The weapon meta has drastically changed, shotguns feel like they’ve taken a back seat already. Definitely be prepared for Stinger SMG ambushes or the vicious MK-Seven Assult Rifle that allows for high accuracy at range. Lobbies also feel more lively now too, with more players returning for the new Chapter, so expect a challenge when you jump in!

Ranger Assult Rifle – A medium to a long-range gun that packs a punch.

MK-Seven Assult Rifle – A gun made by The Seven, it’s another assault rifle with a high fire rate that further increases if you confront The Foundation.

Auto Shotgun – Similar to the Tactical Shotgun, it deals less damage than the Striker Pump Shotgun but has a faster fire rate and reload speed.

Hunter Bolt-Action Sniper – Featuring 3 rounds in a clip, you’ll now have multiple tries at that long-range headshot. I’ve already got some brilliant headshots with this beast.

Med-Mist – A new take on the Chug Splashes, the Med-Mist is a healing spray that will allow you to heal yourself or those in your party in a continuous spray until the can is empty.

Guzzle Juice – Another healing item that can restore 100 health slowly, but will cease when you take damage again, so be sure to hide when you start using it.

Spider-Man’s Web-Shooters – Take to the skies with these iconic web-slinging gloves. While not in the game yet, they’ll arrive on the 11th of December and be found in Spider-Man bags hidden over the map. They give you a new mobility option to swing your way across the map.

Spider-Man – The iconic web-slinging crime fighter Peter Parker finally has made it to the island. He’s been rumoured for ages since the Marvel season in Chapter 2, but now he’s finally here! It also features a Venom and 2099 variant, and possibly more when the rest of the bonus skins unlock. There are also going to be more styles and other familiar faces coming in the item shop soon, just in time for the new movie – Spider-Man No Way Home!

The Foundation – The leader of the seven and also none other than THE ROCK himself. It’s been a while since we’ve had one of these mysterious skins appear in the game. Returning players will recognise this character from when he first appeared in Season 6 of Chapter 2.

Shanta – This season’s upgradeable skin, “Lotus Walker” Shanta is ready for the fight. Featuring a suit of armour dripping in white gold, and a cosmetic set featuring the iconic lotus flower. She’s a must-have this season.

Ronin – Ronin the wanderer moves through the game with the style and grace of an accomplished fighter. I’m already loving his options and I hope the bonus styles give him even more customisation options.

Lt. John Llama – It ain’t a Fortnite Battle Pass without some quirky Llama reference and this skin is just that! Personally, I’m more of a Buff Cat fan.

GUMBO – Prepare for a synthetically flavoured, attitude-authentic gumball machine to come to life, who’s ready to pop a victory shot. A sweet set with an adorably chaotic vibe, the back bling from this set is a stand-out.

Harlowe – A hopeful outlaw, ready to take victory for herself. Her skin and cosmetics are a slick combination that will make you the most envied on the island.

Haven – An island native who will do anything to see the island survive, she’s also this season’s unlockable skin, featuring mask styles that will be revealed soon.

XP – Players will now earn XP in Creative and Save the World that will further their progress in the Battle Pass. In Chapter 3, Creative maps are now able to properly gift XP through accolades. Currently, it’s been given by time spent in the mode.

Sliding also will be present in the mode, but it can be disabled so it won’t ruin the fun on maps that were made before the new mobility option was added.

New Weapons – They are all now available in Creative Mode as well, and the new building resources introduced in this chapter are too. This means you’ll be able to create your own creations with the new pieces with no delay. 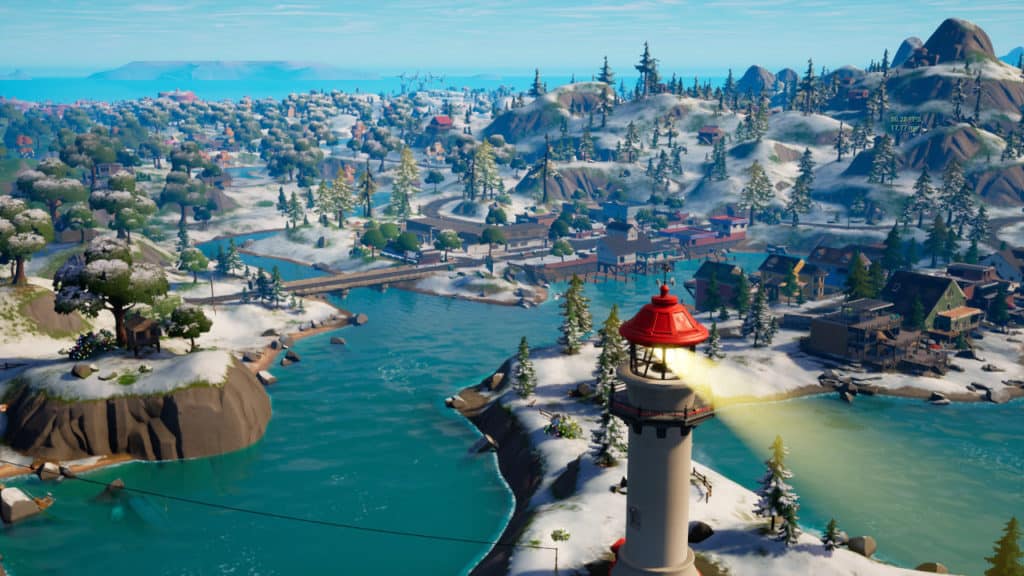 Chapter 3 is geared up to be its strongest yet. Now that Fortnite is in its fourth year, it’s great to see the developers still willing to quite literally flip the game and give players a new challenge! I know I say this every season, but chapter 3 is the perfect time to jump in even if you’ve never played before. The game has had many new crossovers with licensed content such as Naruto and even League of Legends!

As always, Fortnite is available free on console and PC. Fortnite Chapter 3, Season 1 will conclude on March 19th. If you’ve been debating jumping back into the game, now is the perfect time to do so. There is even an ANZ-themed Creative world present with 4 mini-games and there’s already talk of more musical events coming! So where will you and your battle royale besties be dropping first on the new map?