Been there, chromed that… or at least we had last season! Fortnite Chapter 3 met its end sooner than anyone thought possible in season 4 with an island-shattering event.

With the beloved map once again in turmoil, it wasn’t long before the next map took shape. The fourth complete reiteration has seen the map be completely renewed with all locations being unlike those we’ve seen before. It’s normal for new maps to share similar locale’s but this chapter has opted to start a fresh. Check out the trailer for the first season of Fortnite Chapter 4 below!

Dirt Bikes! Augments! A big hammer! Chapter Four is anything but subtle. It’s a very strong start for the and it’s already shocked players with an entire graphics overhaul with the move to Unreal Engine 5. It’s really exciting to see Fortnite undergo such a graphic upheaval and the new map does a great job of showcasing its muscle as a game engine.

Jumping in this season has been really refreshing for a player like me who is practically a veteran at this point. Continuously, it feels like the game isn’t afraid to trying new things and this season is no different. While the new kit of shotguns and assault rifles feels a little bit staunched, the real standout is the hammer that allows you to bounce around the map with ease and the Ex-calibur rifle, shooting swords that then explode once stuck in enemies or the environment. Both ooze fun, encouraging players to try new things and see if they come up victorious!

And it wouldn’t be Christmas time without a Fortnite event now, would it? The holiday season is here in Fortnite again with the Winterfest 2022 event.  Just by jumping on, you’ll receive 14 presents featuring 17 cosmetics, two of which are outfits! Christmas time in Fortnite also brings the return of the snowball launcher and throwable Holiday Presents that gift players with a small horde of weapons and healing supplies. It’s great seeing the game embrace the holiday spirit this close to a chapter release, it almost feels like a celebration of the new map. 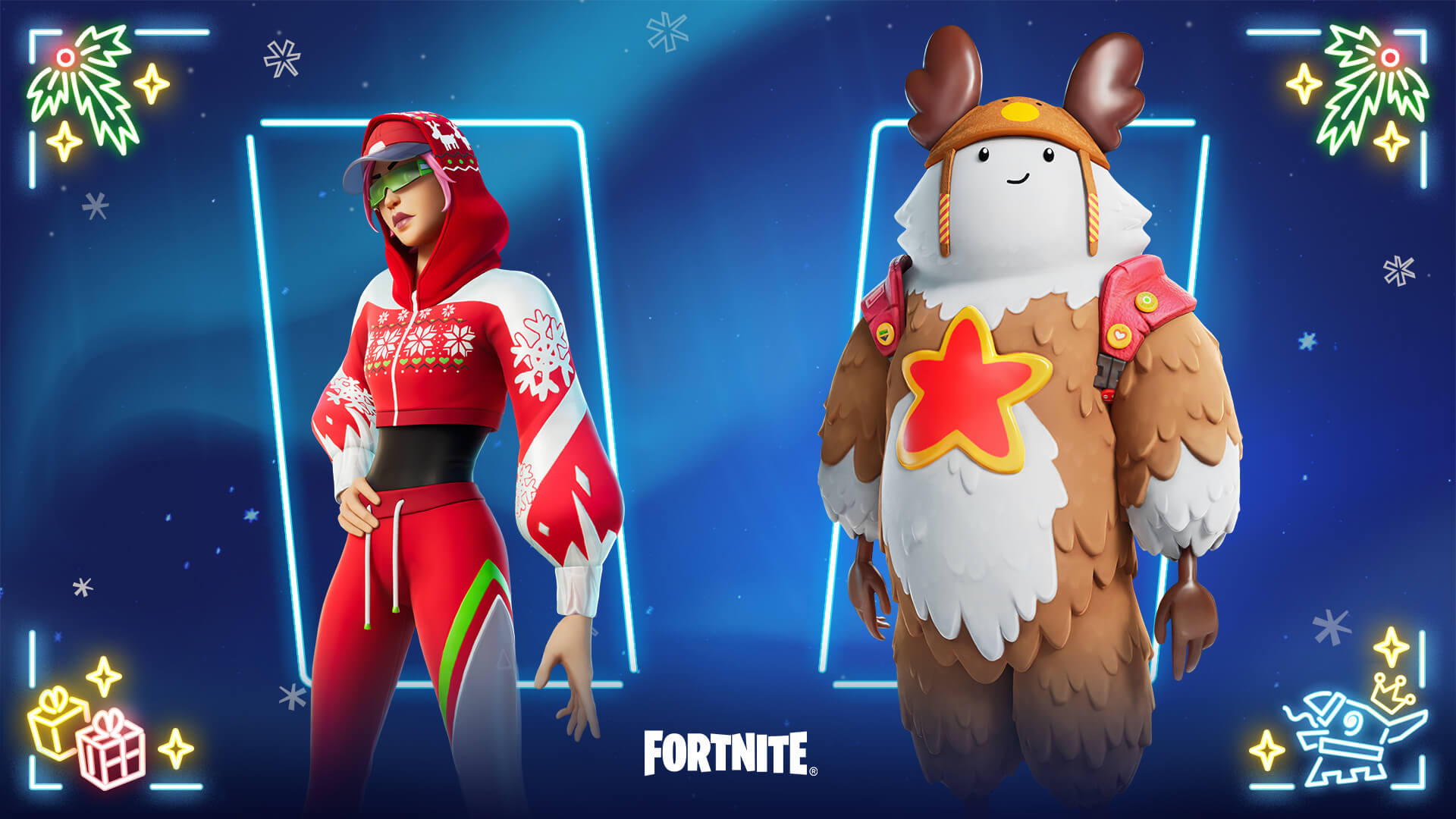 Chapter 4 is also absolutely bursting at the seams with crossover content as well. Fortnite has really garnered a reputation for giving the player base a wide selection of skins to choose from 3rd party IP’s such as Marvel and Star Wars to name some of the biggest. To open the new chapter, players can earn Doom Slayer with several unlockable armor styles. Then, this season’s bonus skin is Geralt Of Rivia! The iconic Witcher follows up the battle pass with a signature emote and sword pickaxe. I’m pretty excited to get my hands on a Witcher skin, and I can only hope that we’ll see Yennefer and other iconic characters from the franchise soon enough in the shop.

In the store, the new anime collab set has dropped, revealing 4 iconic characters from My Hero Academia. Play as Izuka, All Might, Katsuki Bakugo, and Ochaco who all look like they’ve jump straight out of the show. Check them out in-game below.

The in-game power-up is similar to what we saw with the Dragon Ball Z collab earlier this year, except this one works more like a grenade. Similar to the Dragon Ball Z power-up, players must charge the attack first by flying up into the air in a stationary position, which is when they are most vulnerable to enemy fire.

I guess now, the only question is what does the rest of Chapter 4 have in store for players? Personally, I hope we see another Marvel battle pass but in the meantime, I’ll have a lot of fun getting dubs as Geralt. “Toss a win to your witcher – OH CHAPTER 4 OF PLENTY!” Fortnite Chapter 4, Season 1 is available free to play now.