It will come to no surprise to most listeners of the show that I’m reviewing The Legend Of Zelda: Twilight Princess HD as I’ve talked many times about how this game was pivotal in my falling in love with the series.

Twilight Princess hit our shores 10 years ago as a launch title for the Nintendo Wii and a concurrent release on the Wii’s predecessor the GameCube. I have fond memories of powering through the game for the first week after picking up the Wii at a midnight launch. Twilight Princess has your usual elements of any Zelda game; brilliantly designed dungeons that are unique and challenging, a vast over world with plenty of secrets to unlock and a little bit of a twist in the tale with our hero Link being transformed into a wolf whenever he’s in the twilight realm.

Structurally the world of Hyrule follows the usual template, but it’s the scale that stands out. Among the usual fields, volcanic mountains, ice-covered lands, mystical temples and more, this game works hard to find variety in dungeon design and gameplay. There are moments where you snowboard down a mountain, walk upside down with magnetic boots or battle with fierce winds and lengthy hookshot mazes. There are hidden areas in which collectibles require combat or puzzles before giving up their reward, and the usual distractions – like fishing – are included and can easily suck away a lot of your time.

It’s a large, interesting world, and the core cast of characters also deserves credit. Link forms unique bonds with various protagonists, with subtle cutscenes and dialogue bringing these relationships to life. The stand-out is with Midna, whose character evolves nicely with the plot, and her friendship with Link, which is sometimes expressed with a mere nod or smile towards each other, is one of the best partnerships the series has seen. Beyond those lead characters, there’s charm and variety to Hyrule’s citizens, some with memorable subplots and tales to share; Zant, for example, is a delightfully odd villain.

“…some neat extras that cater to dedicated fans.” 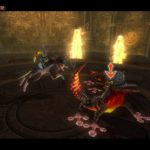 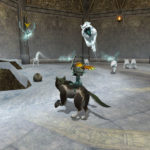 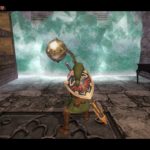 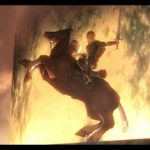 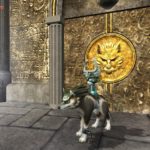 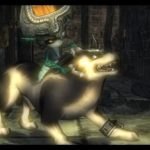 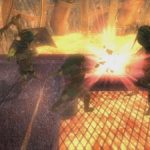 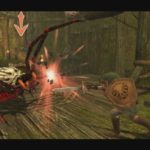 Combat wise we’ve moved away from swinging the remotes wildly, to the buttons of the Wii U gamepad whilst still maintaining the motion controls for the firing of arrows, nuts from the slingshot or targeting your hookshot. The gamepad is utilized well to shift your items around or to act as a mini map for the overworld or dungeons. This is much easier than having to shift around screens on the TV and makes for a much smoother gameplay experience. There is of course, as with most WiiU titles these days, Amiibo functionality.

The Wolf Link amiibo unlocks the Cave of Shadows, a challenge area of which a similar equivalent existed in the originals; in this case you clear levels filled with enemies as wolf link to earn small rewards and eventually a larger wallet. It also offers the ability to ‘save’ hearts to replenish in-game, though it feels somewhat inconsequential as the standard difficulty isn’t overly taxing. Finally, you also can quick load your save game with a tap of the figure on the opening screen.

You can also use the Zelda franchise Smash Bros. amiibo once a day to reload hearts, arrows or – with Ganondorf – crank up the damage caused by enemies. If you want a major challenge you can play Hero mode right off the bat and scan a Ganondorf amiibo. In a neat touch the normal difficulty setting has a left-handed Link and the GameCube map layout, while Hero mode is a right-handed Link and the mirrored layout from the Wii game. This confused me at first as I’d always played the Wii version, not the GameCube version so I was a little confused when everything was opposite! Tweaks have been made to the game’s balancing, too – currency and wallet expansions are a little easier to pick up, and the Tears of Light collection sections as Wolf Link have been mercifully scaled back. Add to this Hylian Alphabet Miiverse stamps that you can find in treasure chests, and you have some neat extras that cater to dedicated fans.

If you’ve never experienced Twilight Princess it’s time to jump on board and the visual improvement after 10 years looks great on modern day TV’s without compromising the games original styling. With some modern day touches lovers of the original will enjoy being pulled back into the twilight realm for another trot around the fields.