Occasionally a game comes along that imbues a genre with new life. A game that reimagines the standard and repurposes it in a simple yet elegant way. Into the Breach is most certainly one of these games. Releasing at the end of February by developer Subset Games, Into the Breach is a turn based strategy game that brings its own unique spin to the genre. Known for previously releasing a highly acclaimed game by the name of FTL, Subset Games had a lot of work to do to impress their fans and by all accounts they have done exactly that.

With a swarm of alien creatures threatening the last remnants of human civilisation, it is your job to command a small group of mechs to fight back. Launching into the battlefield it will be up to you to defend the cities, take down the aliens, and pull off the perfect strategic manoeuvre on every turn. The aliens will attempt to destroy city buildings, destroy your mechs, or destroy some other structure/resource on the map. Turn by turn you will attempt to thwart the enemies plans by killing the aliens, protecting the structures, and repositioning the enemies to your advantage. The concept of the game is simple and probably sounds similar to other games, although the way the game actually executes on that concept is unlike anything I’ve ever seen.

The enemies set up their attack and you can see exactly what they are intending to attack and how much damage they will do. Although before the enemies can actually pull off that attack you can step in and mess with their plans. Push an enemy into the attack path of another enemy, fling a foe into water, put your body on the line and step in the path of a projectile to save an important objective. Every turn is a small puzzle and every turn will have you racking your brain trying to find the perfect solution.

The concept of the game may seem simple but you pretty quickly figure out just how much variance there can be, it’s practically limitless. There’s a range of different enemies that each have their own attack patterns, health, and passive effects, as well as a huge variety to your own mech loadout that includes attacks, movement abilities, and passive abilities. Add to this environmental effects, a randomised map layout, variable objectives, and more, and suddenly you realise just how deep the variation and the strategy can run.

Playing the game is an absolute strategic blast. Every detail of the enemy movements and attacks are presented to you, nothing shifts or changes without your input. There are no unforeseen events, chance to hit percentages, or anything that forces you to rely on the roll of a die. This means that should you understand your own actions and the result of those actions, then you can completely telegraph exactly how the encounter will go down. Everything relies on you and your ability to plan out the perfect move. This means that at the beginning of every turn is a mini puzzle where you simulate the outcome of your actions time and time again until you have the perfect solution, or so you may think. It’s incredibly intuitive and rewarding design that is honestly so clever yet so simple. 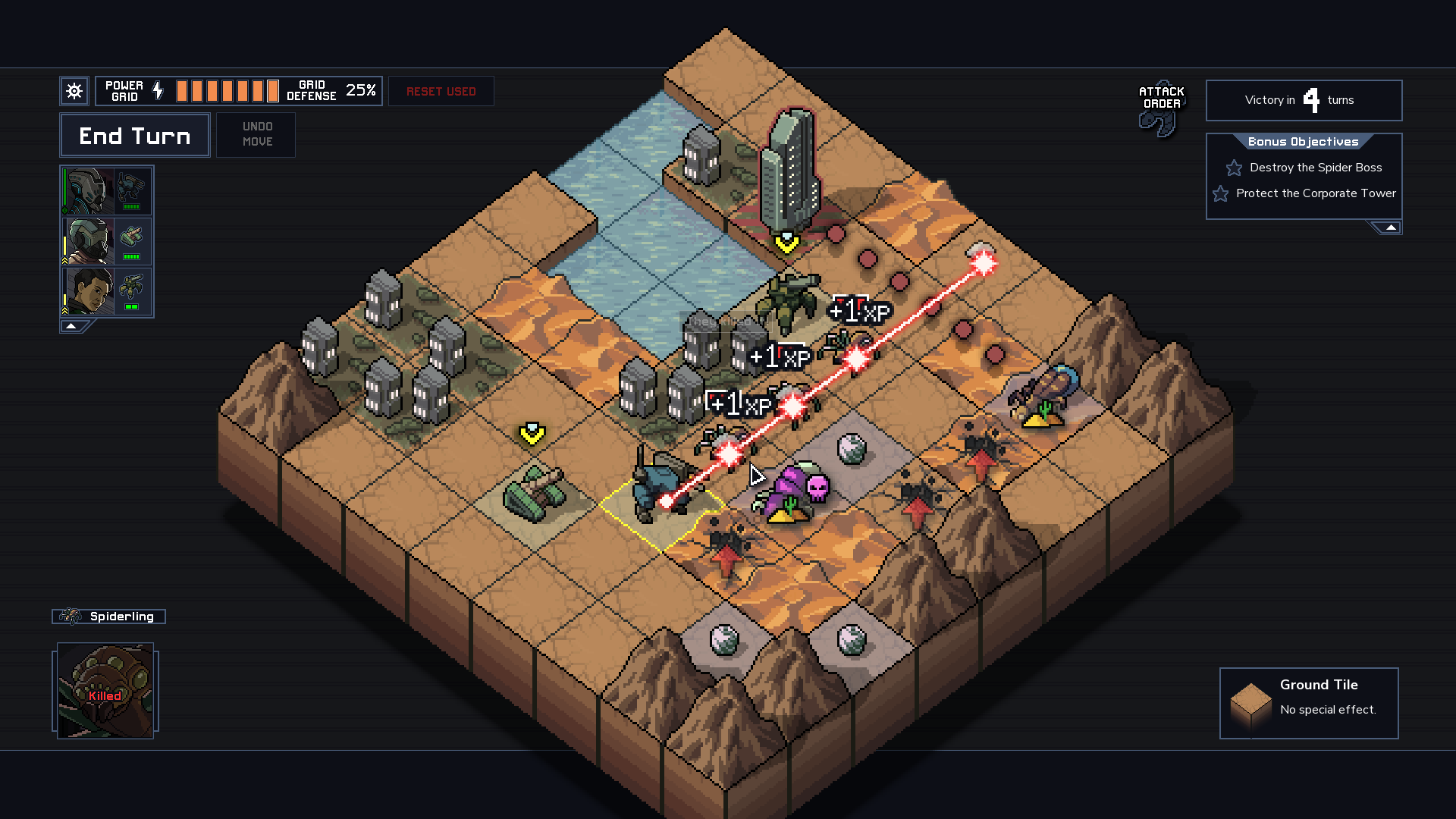 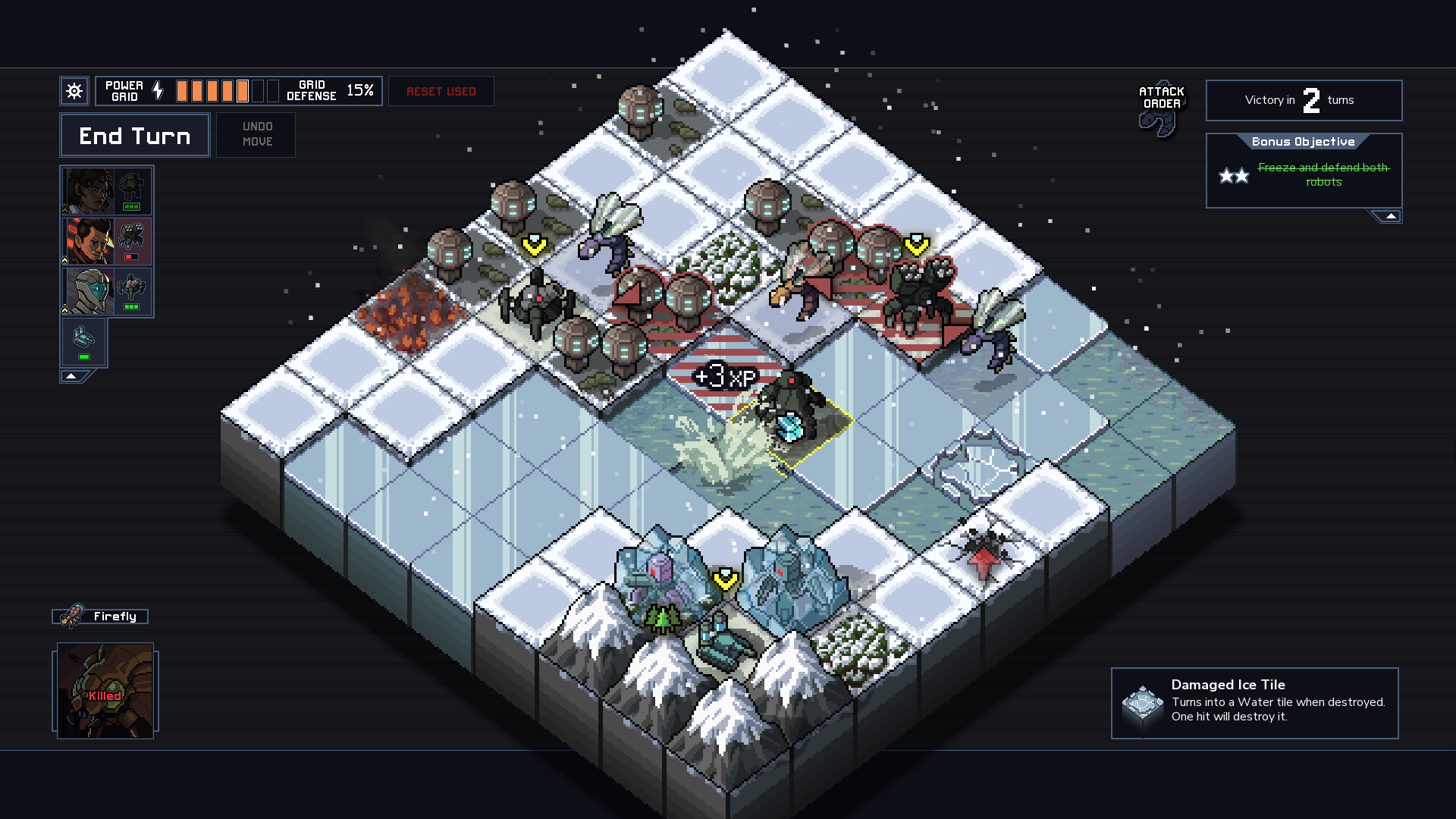 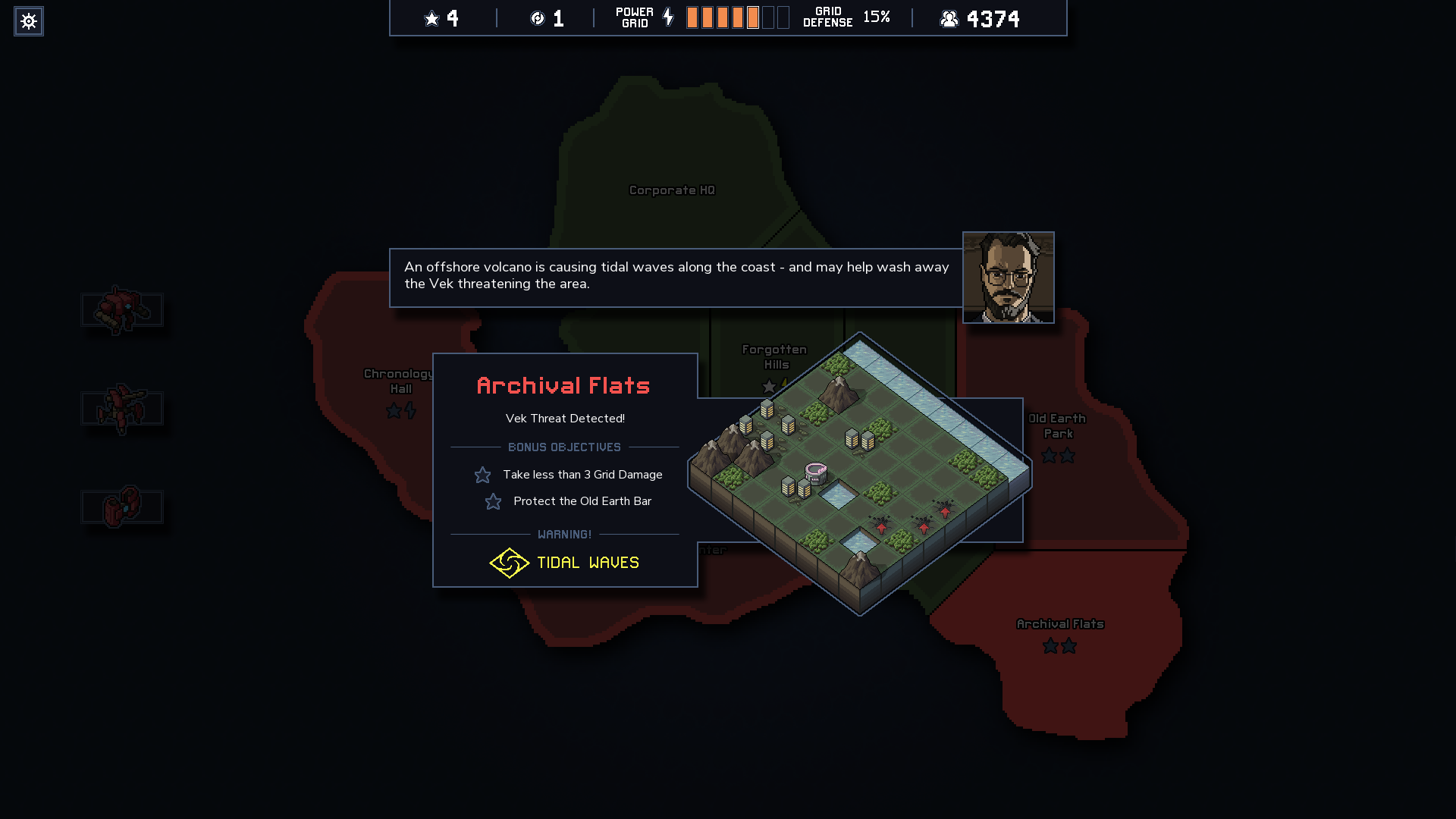 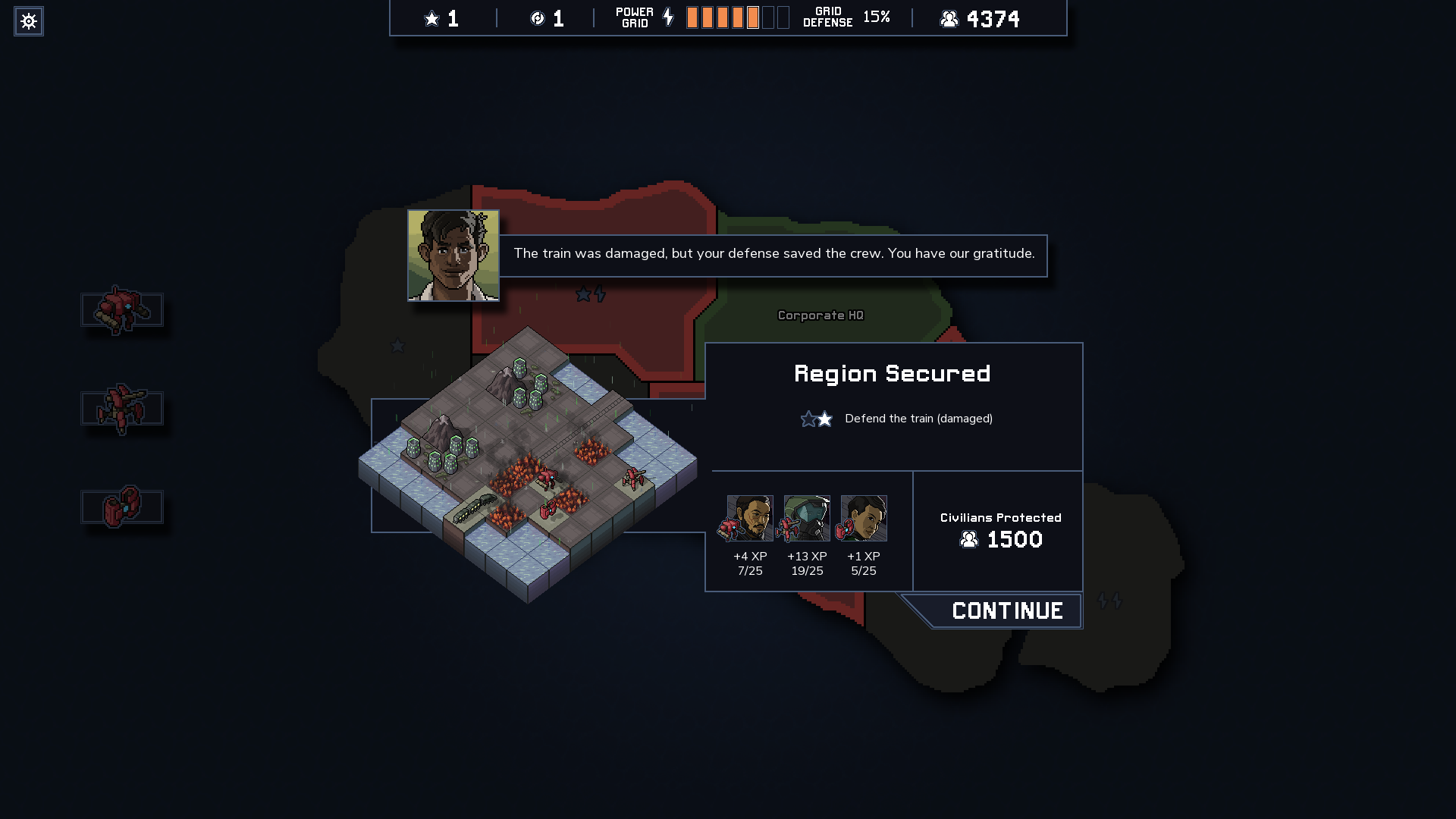 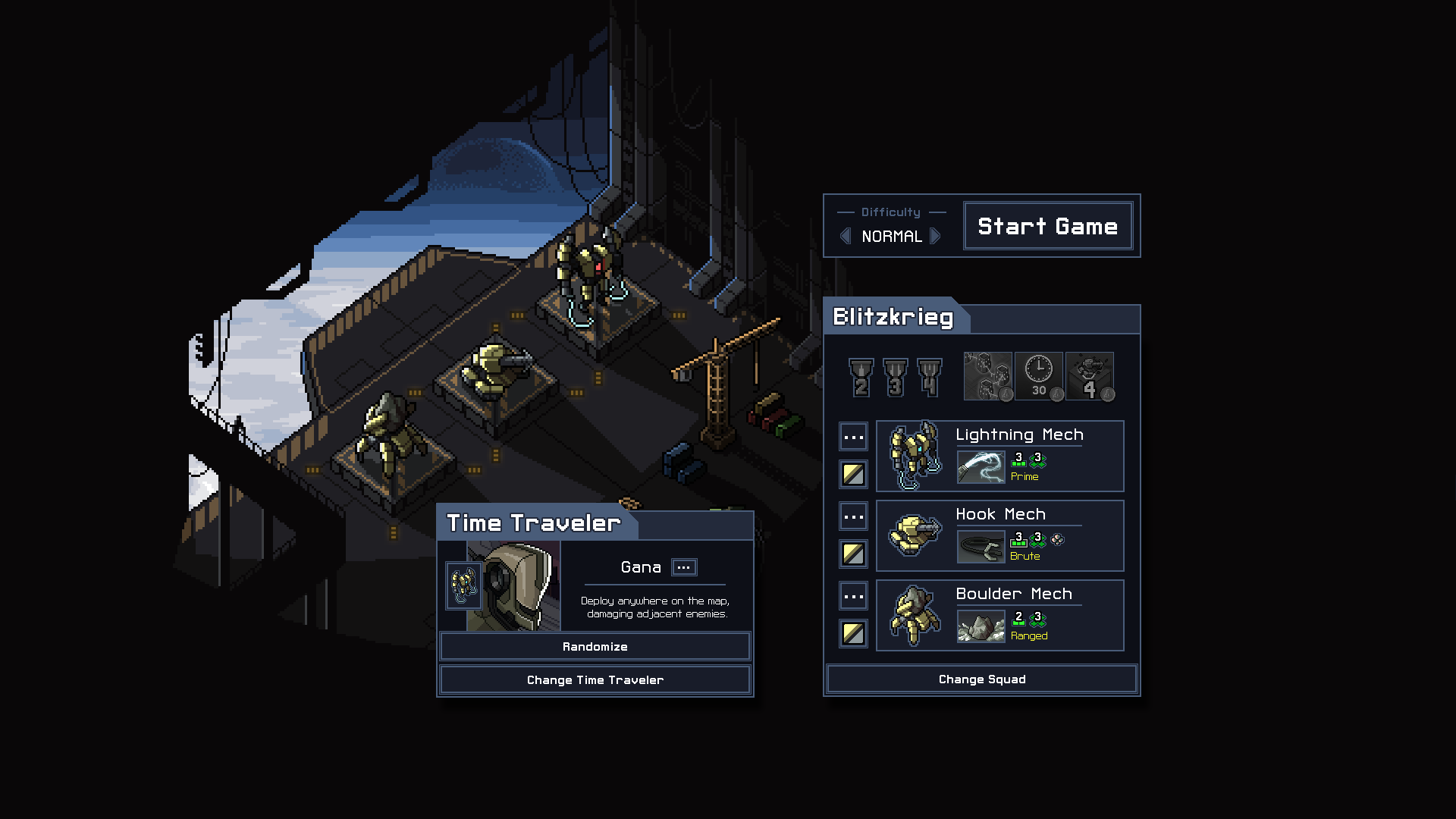 The game also features some RPG and rogue-like mechanics. Fans of FTL will see some familiar mechanics that have been shifted into this new game. Each of the levels you spawn in is randomised to keep you on your toes. The game features perma-death so that if you mess up badly then you’re starting a brand new run. You also can’t save and reload so every decision you make better be the right one. On death you can save one of your pilots to bring into your next attempt which leaves a small amount of persistence. You also level up your pilots, acquire new skills for your mechs, and acquire new pilots and mechs as you go. Every system works to the game’s advantage and everything feels like a complete and well thought out package.

Beating the game won’t take you a long time. In fact you can take on the final mission after completing just 2 of the 4 islands. A quick thinker will easily be able to achieve this in around an hours time. What this means is that the game wants you to replay it time and time again. Much like any rogue-like, the game is about the challenge, about multiple attempts, and about trying new things every time and learning as you go. Unlike many rogue-like’s however, Into the Breach is slow and methodical. If anything is going to be this game’s downfall it’s that multiple playthroughs may be a less exciting prospect due to the slower pace of the game, making it quite light on content. Although for strategy lovers, this won’t be a problem.

The whole game’s design is elegantly simple. It has a clean and easy-to-read art direction and intuitive UI that presents you with every detail you’ll need. The systems that have been put in place aren’t bloated and cumbersome but are all perfectly blended into the gameplay experience. The game is also incredibly well polished, there’s a lot to love with Into the Breach.

Fans of strategy games can’t possibly be disappointed with this release. Into the Breach is a fun and rewarding game that really is quite unique in its approach to the popular genre. With replayability options out the wazoo, this is a no-brain purchase for those who are looking to test their strategic minds and for those who don’t mind a slower pace of game. Into the Breach hides a lot of complexity behind an incredibly simple concept and it will not doubt become a game that I find myself returning to time and time again.