The Adventure Pals is a delightfully insane adventure game filled with hot dogs, giraffes and pet rocks by Massive Monster and is out now across all platforms. This indie title was funded on Kickstarter back in 2016 and has captivated many of us here at Checkpoint. Showcased at 2017’s PAX AUS, we were all instantly addicted to this adorable and hilarious indie title and have been eagerly awaiting its release ever since. Of course nobody was more excited then yours truly so when the opportunity to review The Adventure Pals presented itself I pounced on it like a cat to cupcakes!

At its core The Adventure Pals is pretty simple. It’s a quirky game about friendship involving a small boy and the crazy adventures he goes on with his giraffe and pet rock. Along the way the boy must explore his childhood as he goes on an epic quest to rescue his Papa from being turned into a hot dog. Sounds simple enough and not crazy at all, right!?

Well okay, it’s a little crazy, but it works… So let’s dive right in!

There’s no denying that when you start up the game you’re going to be making some comparisons to things like Adventure Time, Rick and Morty, Gravity Falls, Star and the Forces of Evil and so many more of those Cartoon Network or Disney XD type of shows. Filled with bright eye catching colours and adorable cutesy graphics, The Adventure Pals does take its inspiration from these and other places combining it all into the glorious platformer presented before you that’s not only visually stunning but an honest delight to play as well.

You start the game by celebrating your birthday with your Papa. Naturally he bakes a gift into your cake (just like all good gifts… such as half naked dancers or prison presents). Your gift is a giraffe named Sparkles who you promptly shove into your magical backpack. All of a sudden your Papa gets kidnapped by the depraved Mr B. who plans to turn not only your poor Papa but all elderly people into hot dogs, so clearly this is already topping any birthday I’ve ever had.

“It’s that goofy yet zany sense of humour that somehow taps into our primal funny bones and I’ve found myself laughing out loud so much whilst playing this game.”

Waking up back at home after taking a small Mr B. sized beating you instantly tell your Mama what’s happened. Whilst there you’re introduced to a pack of foxes playing some wicked jams on your front lawn called ‘Pavlov’s Pack’. Cool name right…? I bet it rings a bell!

If you haven’t guessed it by now The Adventure Pals has a real unique sense of humour that I think comes from the cartoon inspiration I mentioned above. It’s that goofy yet zany sense of humour that somehow taps into our primal funny bones and I’ve found myself laughing out loud so much whilst playing this game.

All this humour isn’t just haphazardly thrown in either. Though not necessary, The Adventure Pals does actually contain quite the compelling storyline and it serves a purpose to support the RPG elements of this delightful side-scroller, featuring throughout the games 100+ levels.

Those 100+ levels are broken up into five uniquely themed worlds with various stages. New stages are not unlocked by simply completing the last area, mostly you will need to converse with other NPCs in the game, opening up quests as you go. The quests will vary, such as a scorned selfie queen looking for payback or Pavlov’s Pack needing some “inspiration”. But what’s clear is that all quests contain that level of humour I mentioned earlier which carries throughout the game. Humour aside, it’s the gameplay that really sets The Adventure Pals apart from other cartoon side-scrollers out there. Whilst simple in its mechanics, a basic hack and slash your way across the level, it’s the added mechanics found in your giraffe buddy or pet rock best friend that make this game spectacular.

When I started playing this game it wasn’t long before I discovered that for the most part everything you come across in the levels was destructible for coins – sweet sweet coins. From the enemies you encountered to boxes to hardcore parkouring wildlife it was there and ready for me to swing my little sword like a psychopathic sushi chief. Once I discovered this I instantly felt the need to kill every living creature and inanimate object, large or small. 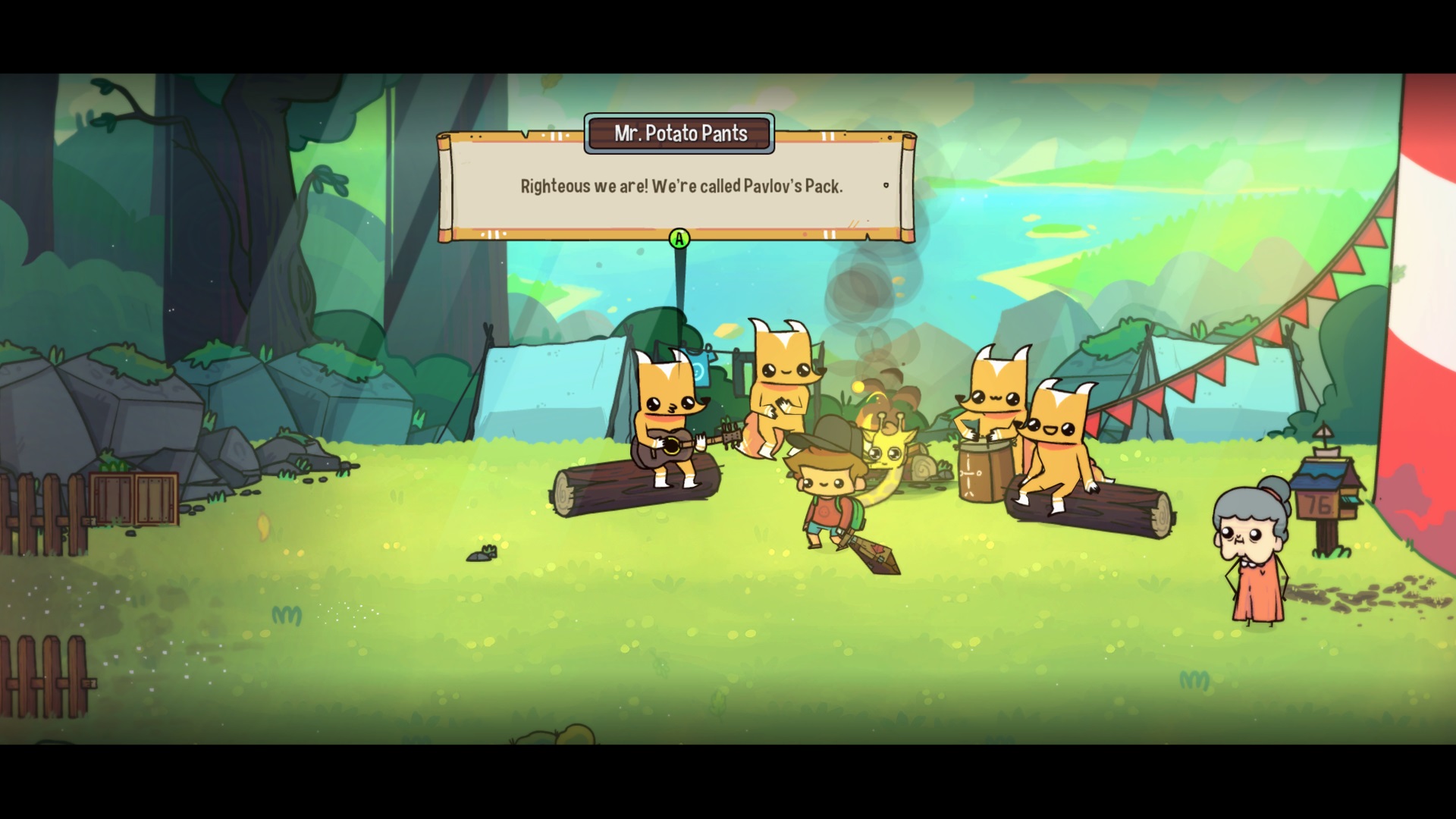 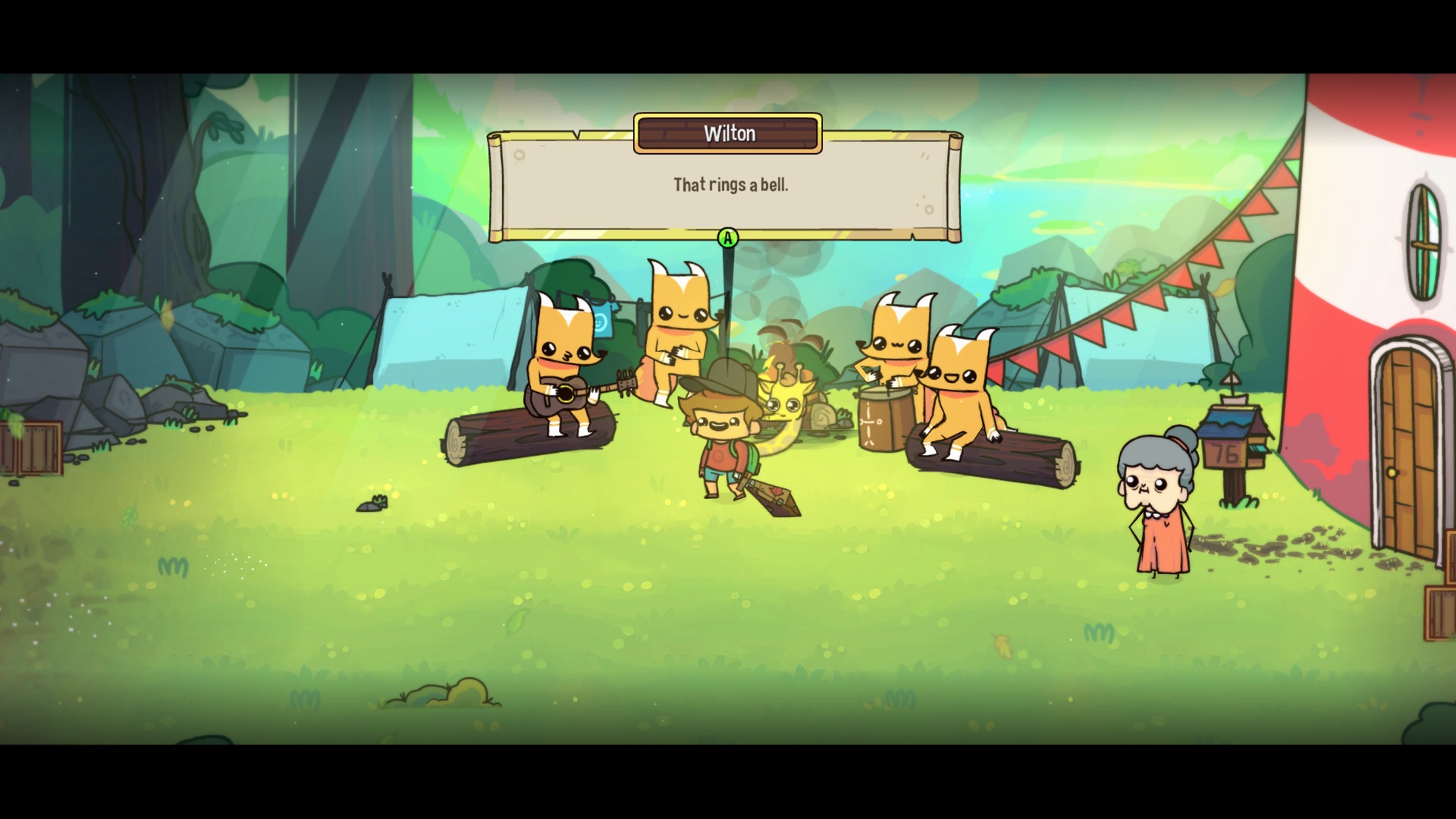 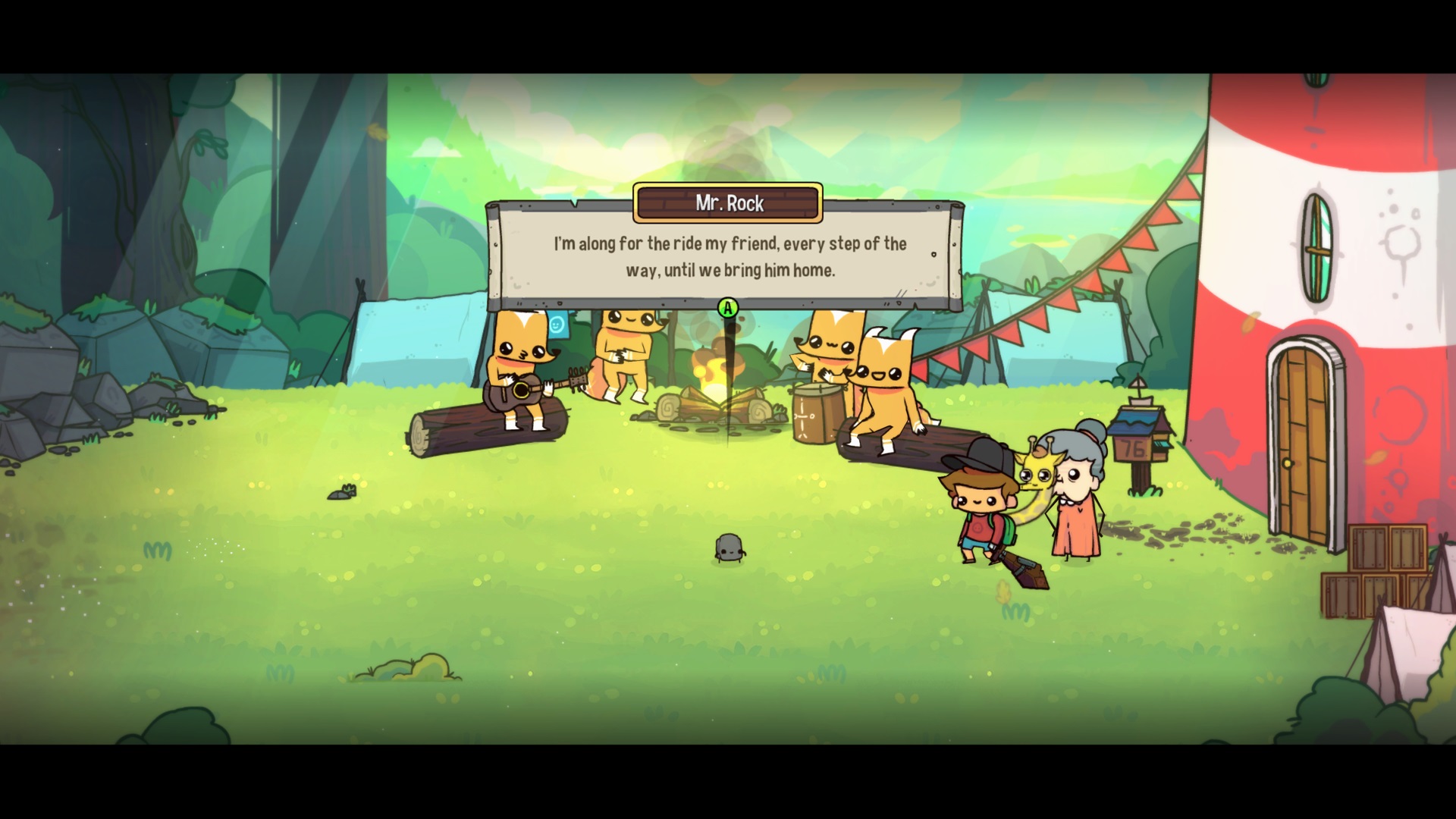 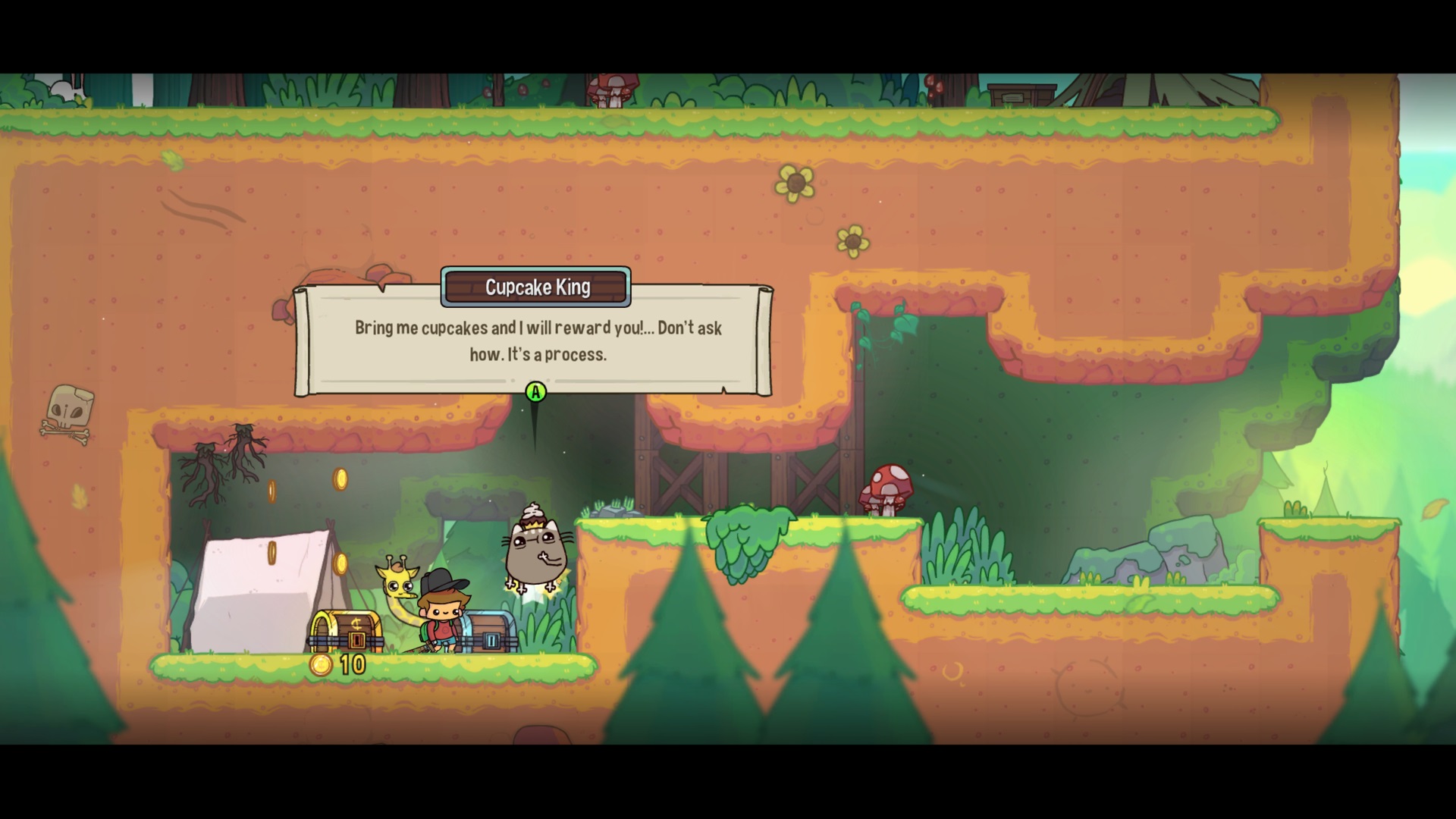 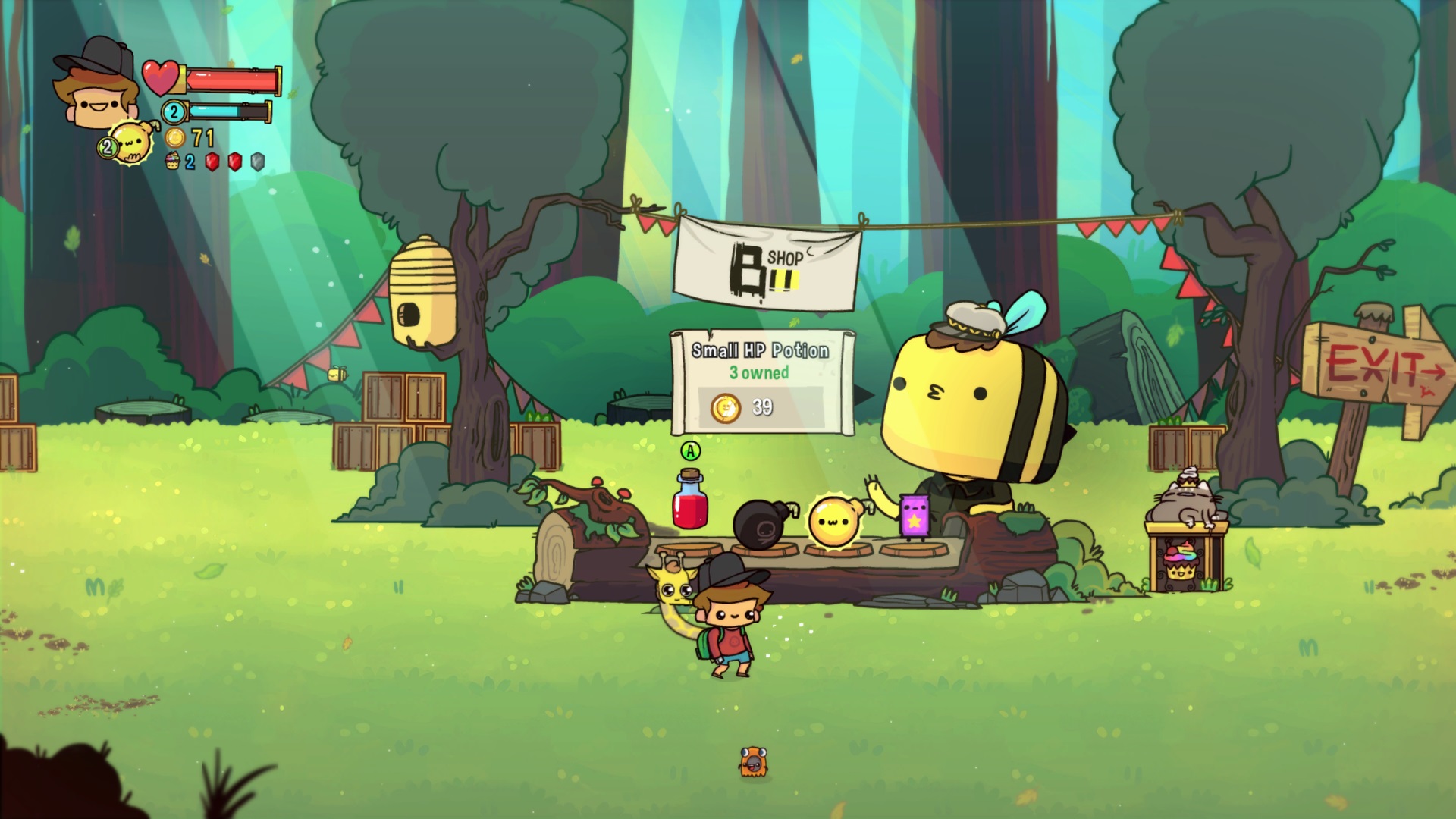 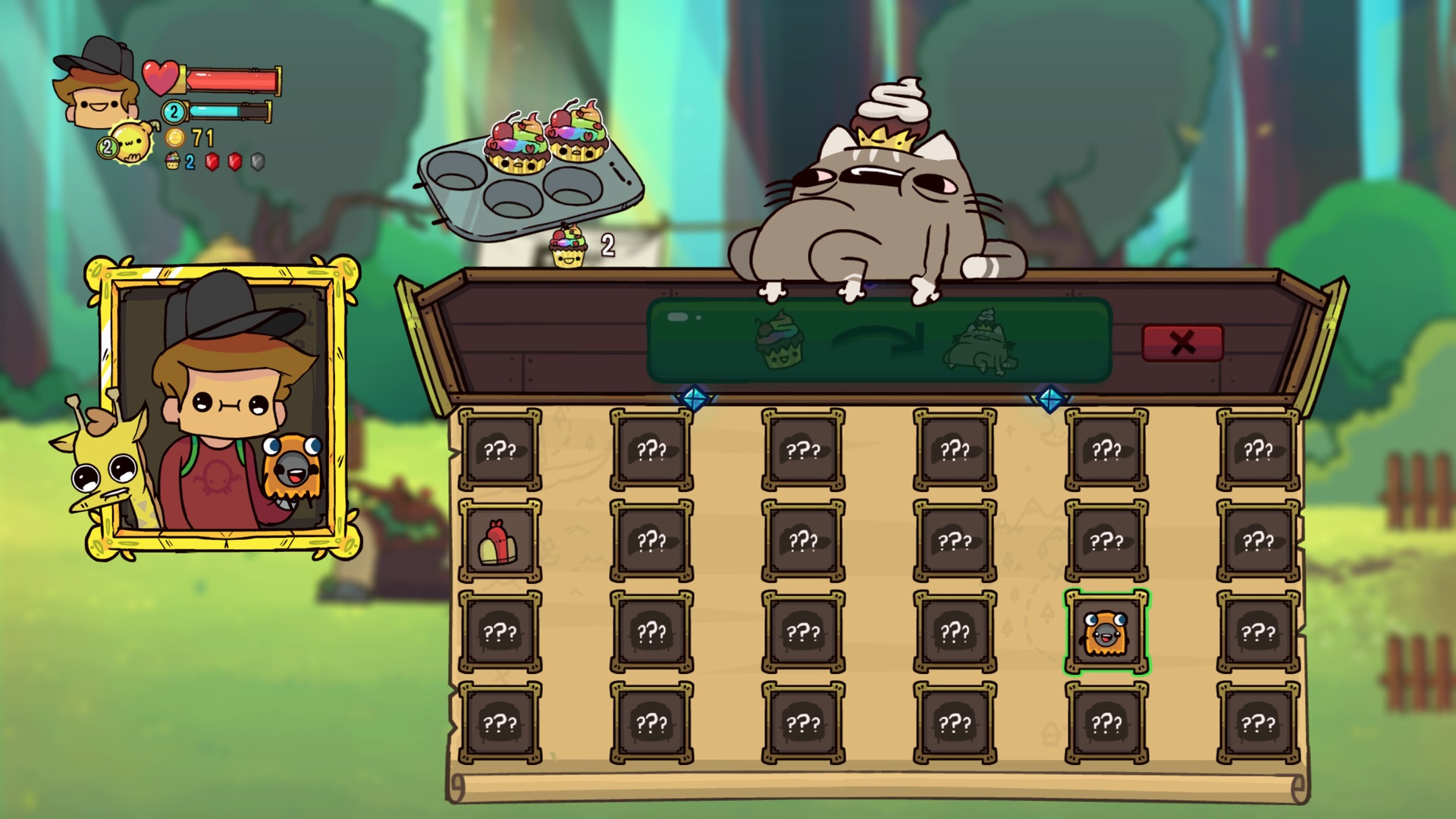 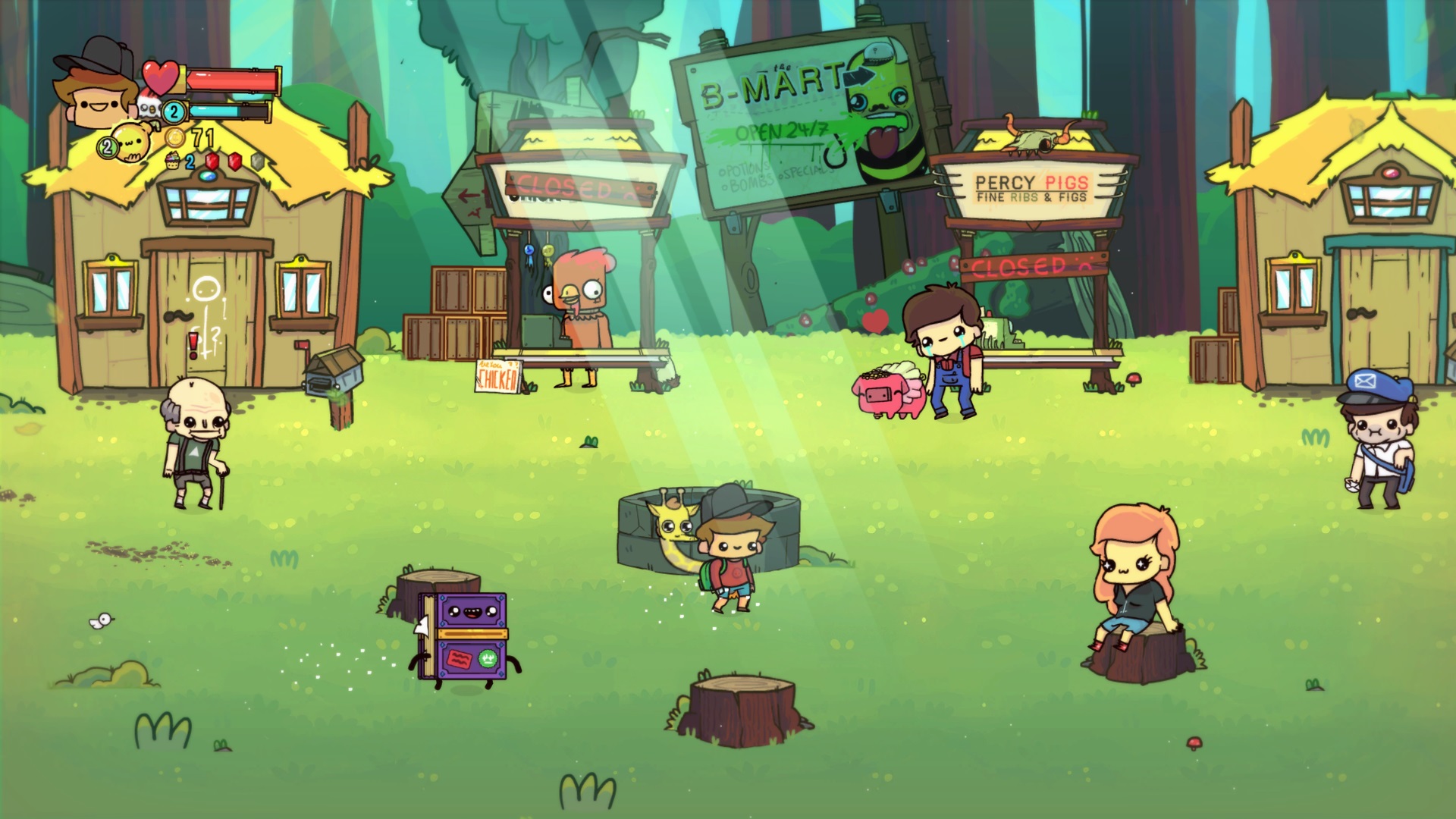 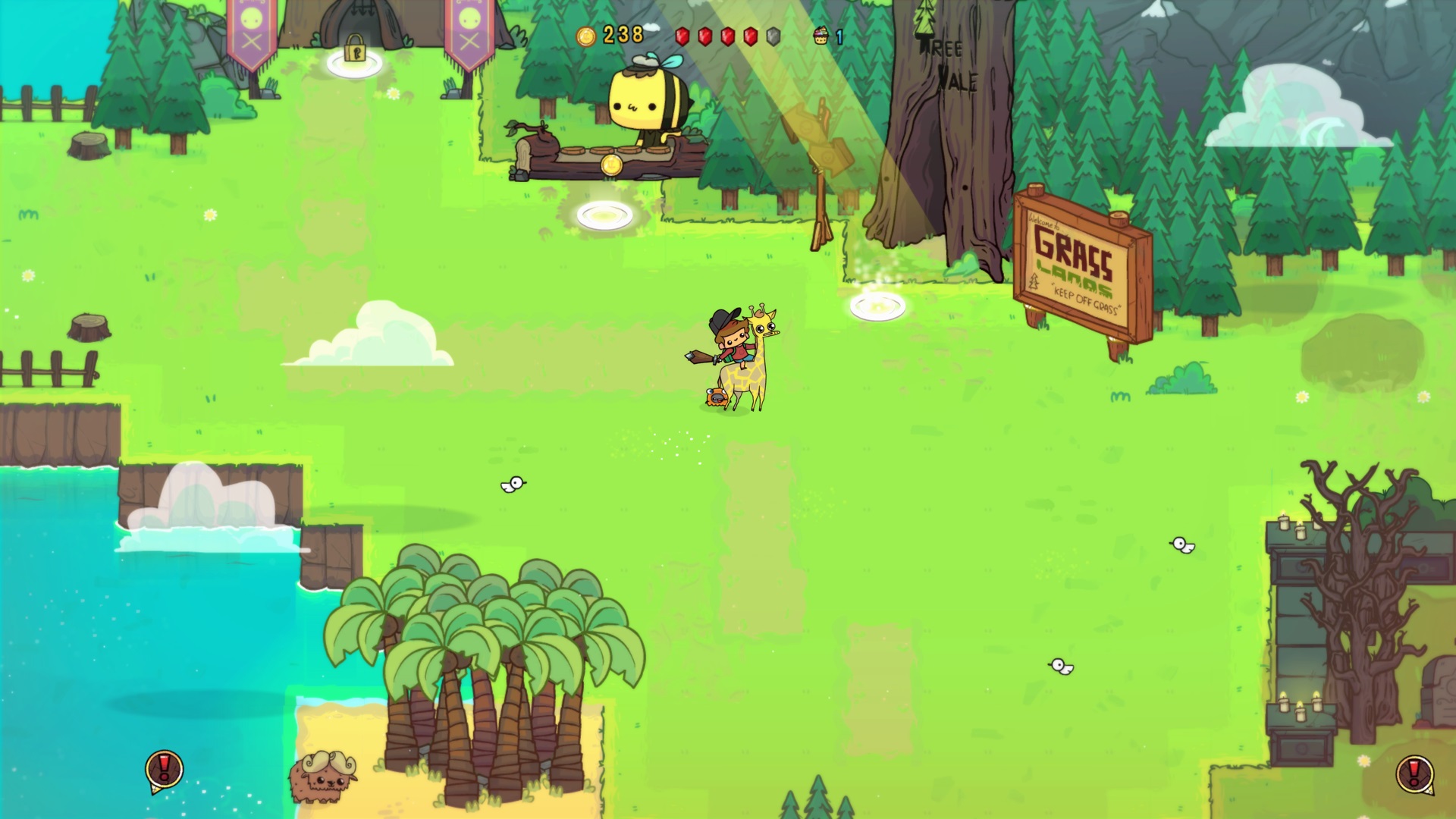 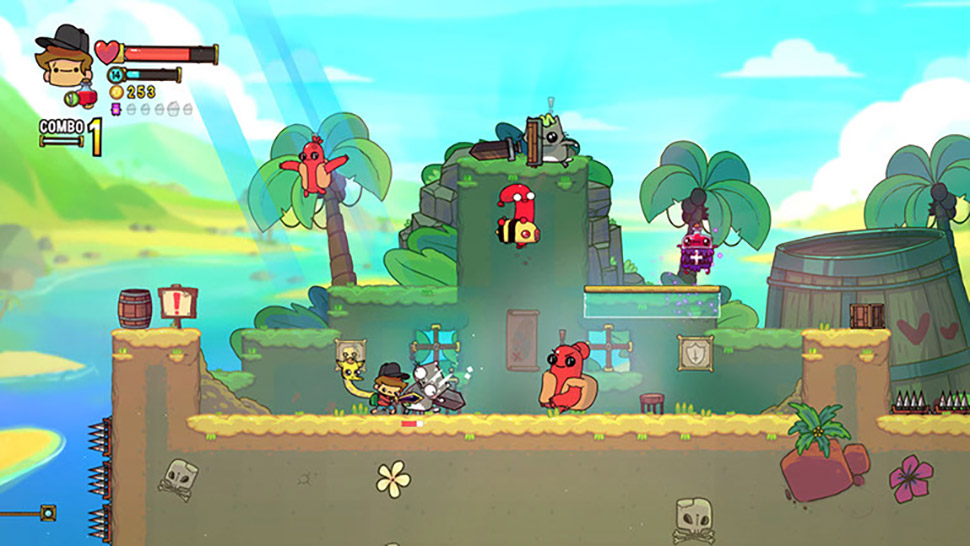 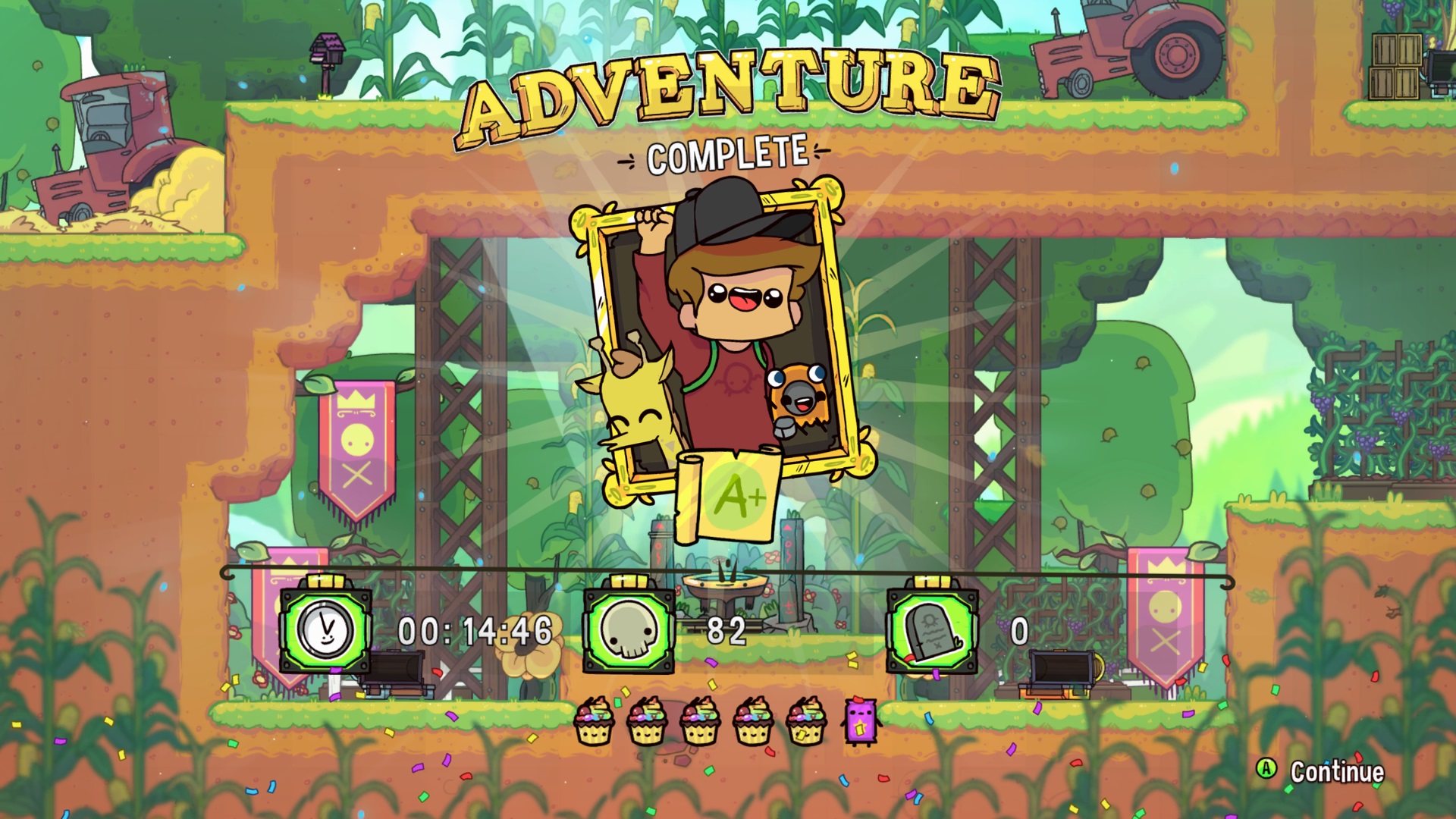 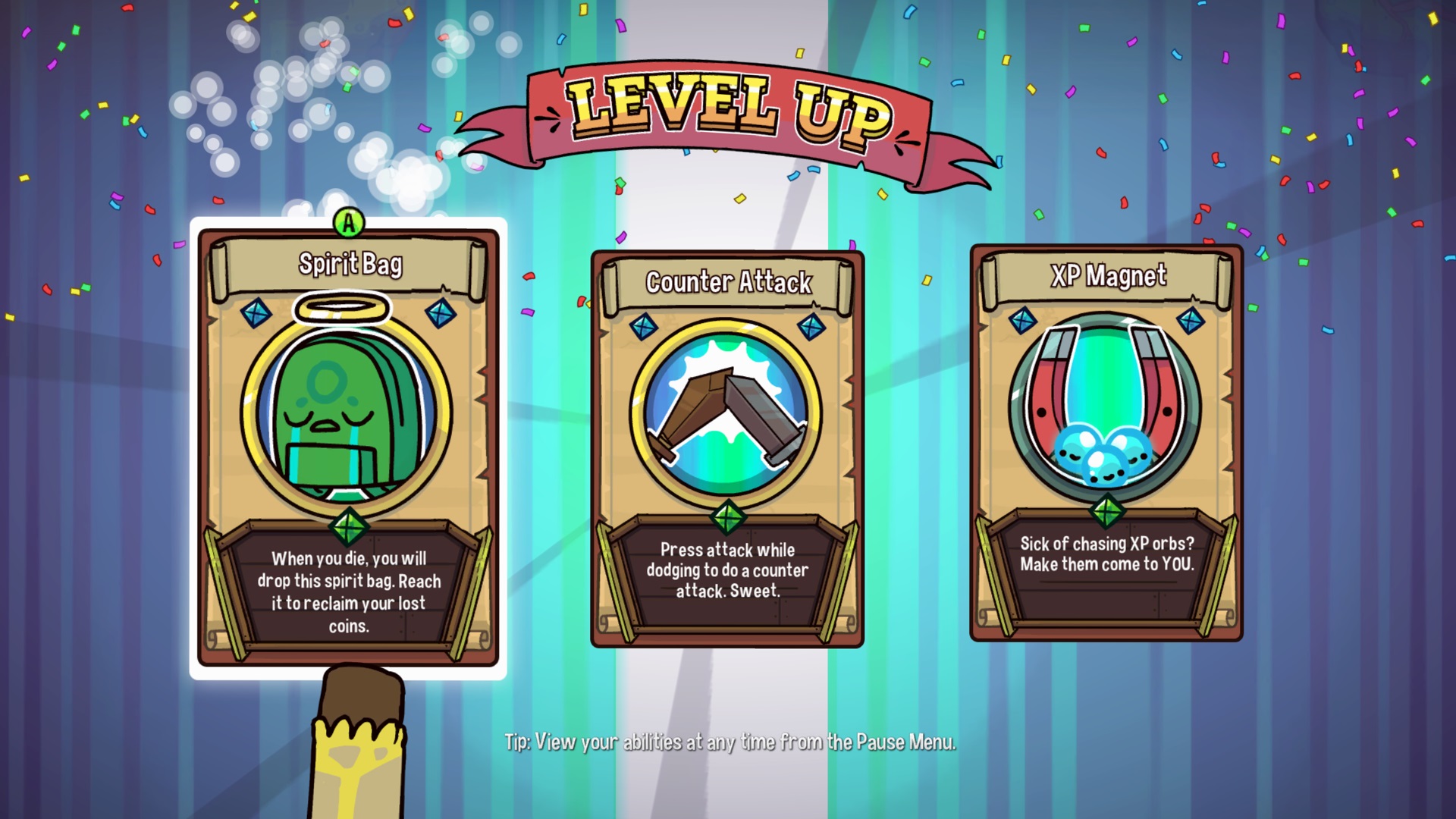 As you hack and slash you level up, and with great level ups come great new abilities. Want a shiny new ability for you or Sparkles? No problem… Now Sparkles can extend her long giraffe neck and pull you towards enemies when you’re on a combo helping you keep those all important combos going. Want more space to hold things in you magic backpack? Also no problem!

There’s also collectibles to be found in The Adventure Pals. While jumping about and killing everything you see you’ll need to make extra sure to be on the look out for these collectibles. Each level contains various cupcakes, used to feed the Cupcake King and unlock character customisations for player 1 only (sadly) and a packet of collectible stickers (which is much harder to locate). At the end of each level you’ll receive a score based on how fast you complete it, whether you found those hidden cupcakes or not, how many times you died and how many enemies you killed. If you have one of those competitive families or friendships this is definitely a game that would work for those who like setting the best time. Speed runners, start your engines.

The Adventure Pals features a drop in drop out co-op mode which makes it easy for you to play with friends or get that little bit of extra help when needed with those boss battles. This is a fabulous feature and one that I think should be available on more games these days. I personally got a lot of use out of this feature, and actually can see many people arguing over the ability to be player 2. As player 2, instead of playing as a male you are now a female (although this isn’t overly clear to the naked eye). The female character gets a unicorn out of the cake rather than a giraffe, or as we affectionately named it here at Checkpoint, a girunicorn… half giraffe, half unicorn.

I’ve spoken at length on how much I love this game and that’s for good reason. Every now and then a game comes along for a reviewer that you simply just love… you can’t find a fault with it no matter how hard you try. Although if I were to fault The Adventure Pals it would be the lack of Checkpoints or auto saves during a level. Instead the game relies on you to manually save (so save regularly if playing alone). Upon your death you are transported back to the start of the level to begin all over again, which can become mildly frustrating as you progress through the game and it becomes steadily harder. Another work around for this is to use the co-op ability and play with a friend, this helps guarantee that death won’t see you restarting, unless they bite the big one as well, of course.

The Adventure Pals is a perfect tribute to all of the past cartoon side-scrollers it has taken inspiration from. Honestly there’s just so much to love about this game, from Pavlov’s Pack to levels filled with dinosaurs and zombie cats, I’ve never had a dull moment whilst playing and I’m definitely going to keep playing and replaying with friends. Anyone who is willing to put up with me taking them on this zany, confetti ass, giraffe helicopter tongued, cartoon filled adventure is welcome!