Mars. Fourth planet from the Sun, likely next candidate for human habitation, and a great setting for a video game. In addition to the Warmind expansion for Destiny II and one of the announced Far Cry 5 DLCs, the latest Mars-based game to come out this year is THQ Nordic’s Red Faction Guerrilla Re-Mars-tered for the PS4, Xbox One and PC.

This is a remaster (sorry, “Re-Mars-ter”) of Volition’s original Red Faction Guerrilla from 2008, containing all of the subsequently released single and multiplayer content as well as fully reworked graphics, improved shadow rendering and lighting, and native 4K support. I never got the chance to play the original, so I will be examining the remaster as someone new to the Red Faction series.

The premise is this: humans have set up a colony on Mars, and are being oppressed by the Earth Defence Force who desire Mars’ resources to help a depleted and financially ruined Earth. You play as Alec Mason, an Earther who is visiting his brother, who is abruptly killed by the EDF, leading Alec to join the resistance group, the Red Faction, in pursuit of revenge.

Red Faction Guerrilla has an interesting premise, but the game’s story does almost nothing with it. The EDF are all cartoonishly villainous jerks who dress like Stormtroopers and oppress people. The Red Faction, on the other hand, are all heroic, ruggedly good-looking underdogs who always have the moral high ground.

Some moral nuance comes into play later on when some of the more ethically murky activities of the Red Faction come to light. However, any discussion of the differences between freedom fighters and terrorism, and whether Mason is fighting for the good of Mars or simply for revenge, is quickly forgotten.

Mason himself, who isn’t even Martian, quickly becomes a hero of the rebellion and is completely dedicated to the Red Faction cause from the very start. His switch from seeing the Red Faction as terrorists to being a Martian patriot in the span of a single scene is overall very jarring.

The game probably could have gotten away with this simplistic storytelling if it had a less serious tone, and embraced the B-movie aspects of its narrative, like in the Just Cause series. However, Red Faction Guerrilla plays what drama it has completely straight, without any hint of irony. Overall, I found the story aspects quite disappointing.

“You start off with a sledgehammer and detonation charges, and acquire other destruction equipment to make blowing stuff up even more fun.”

However, for the most part the gameplay saves it. The central gimmick of the Red Faction series is the unique Geo-Mod engine. In Guerrilla, this manifests as every single building and object being able to be demolished. You start off with a sledgehammer and detonation charges, and acquire other destruction equipment to make blowing stuff up even more fun.

It is the sort of gimmick that adds to the gameplay; for instance, you can just bash new doorways into walls if you can’t find the exit to a building. Another tactic is circumventing enemy snipers by destroying the supports of the platform they are on and sending them falling to their doom.

It can be a bit difficult to tell when a structure is about to fall. Oftentimes, a building will be improbably staying upright until the moment you walk under it and get crushed. However, it is overall a lot of fun to experiment with and cause havoc.

My favourite of the Guerrilla’s side content  was the missions where the player has to destroy a structure under a time limit with certain items. This tests your knowledge of architecture and skill at precisely placing explosives in the structure’s weak spots.

However, the destruction physics interacts with the game’s other mechanics in odd ways. An annoyingly high number of the side missions are escort missions involving saving and escorting a hostage. Having hostages accidentally die because you decided to break into their room with an explosive, or having them be inaccessible because the only stairs to the floor they are on got destroyed, can be garment-rendingly frustrating.

The friendly AI in general has some weird issues. When your morale meter is high enough, friendly resistance members can show up and lend a hand. However, you can’t choose when this happens.  When resistance members die, either from enemy fire or even your own fire because all the characters look similar in the heat of battle, you lose morale. This usually results in a net loss of morale for something totally out of your control.

Some side quests include escort missions, which become annoying due to the friendly AI’s bloodlust. It can be frustrating when you just want the AI to follow Mason out of harm’s way, but they instead insist on engaging EDF troops, and die in the process leading to another restart. 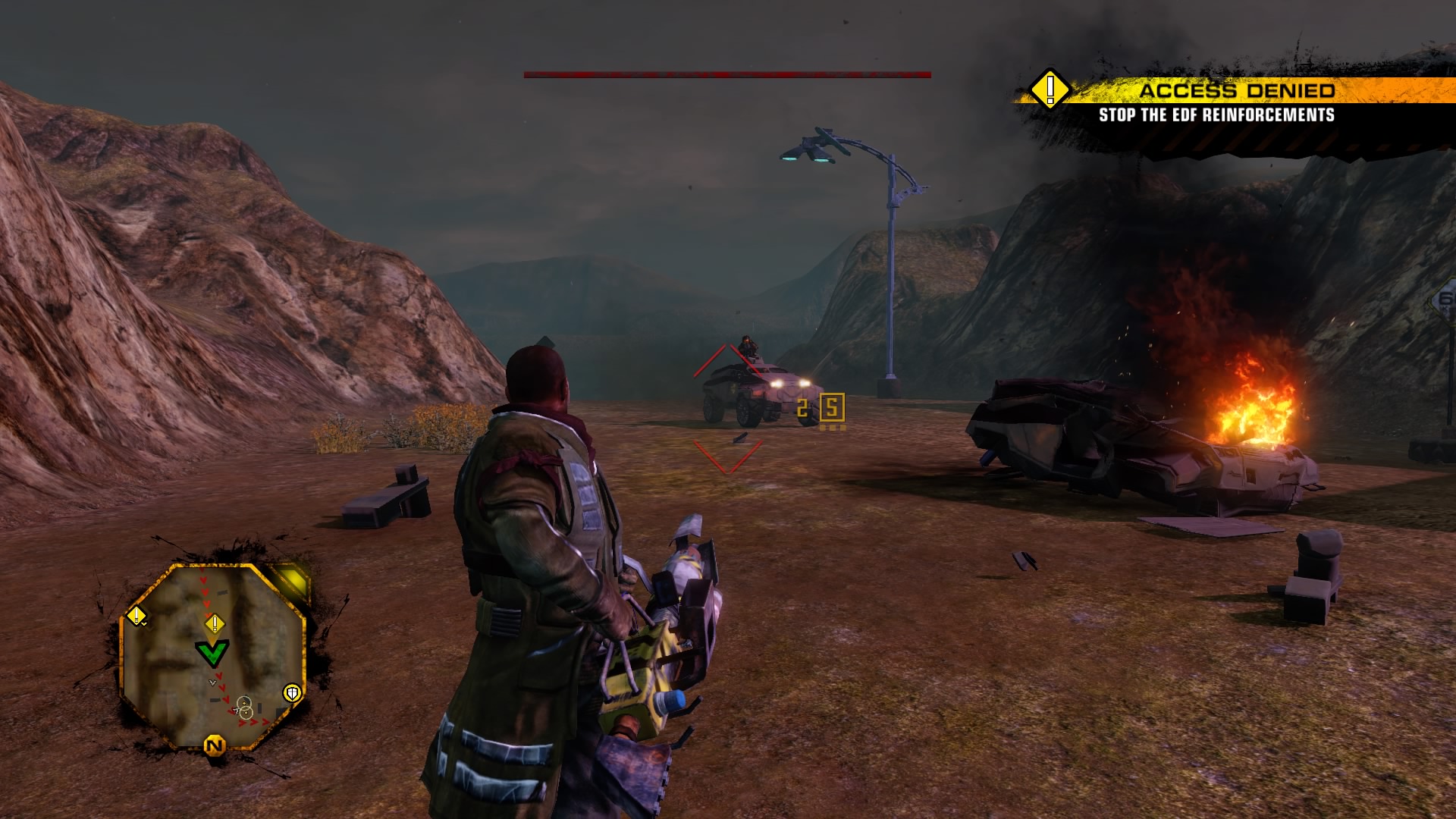 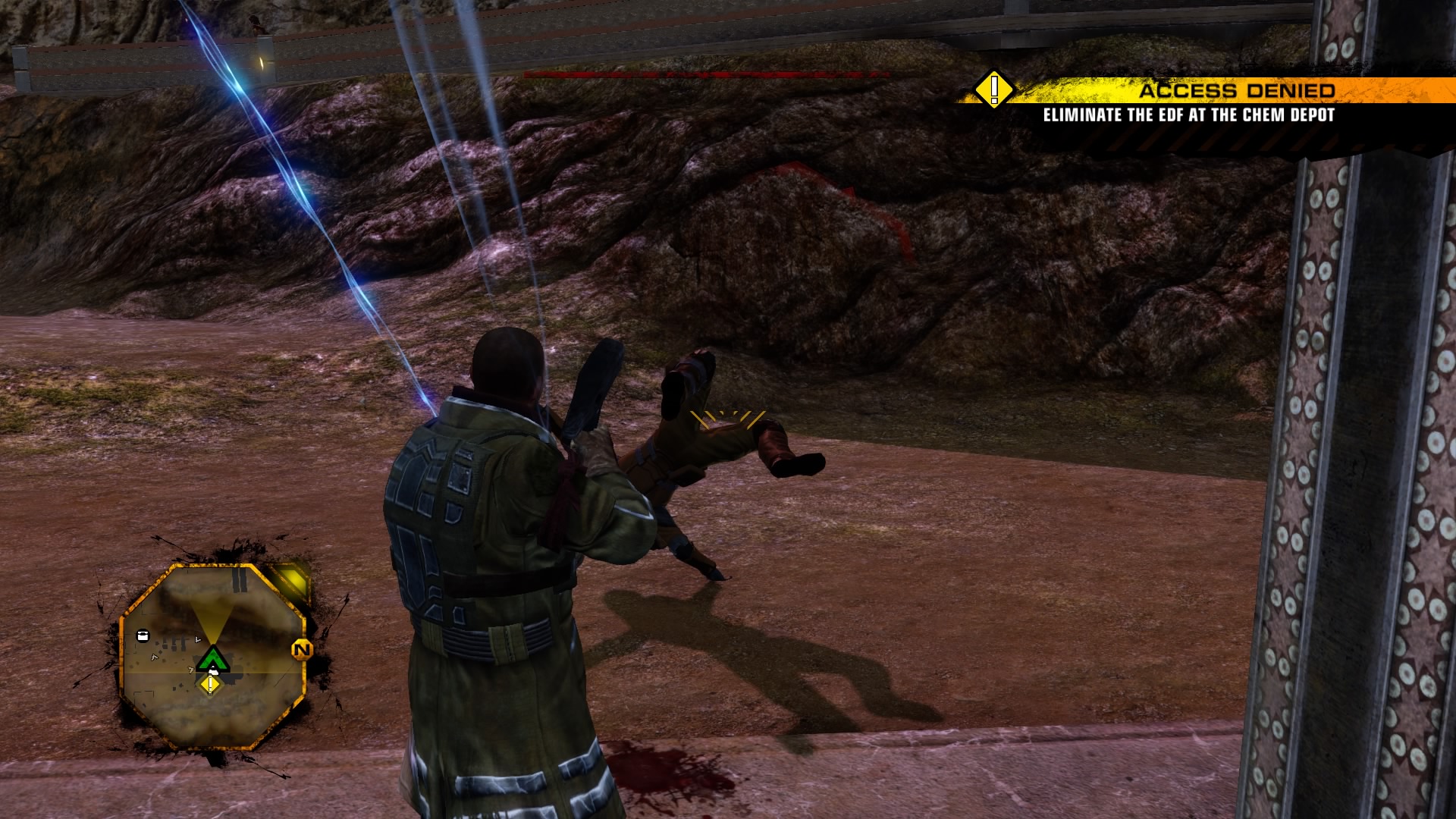 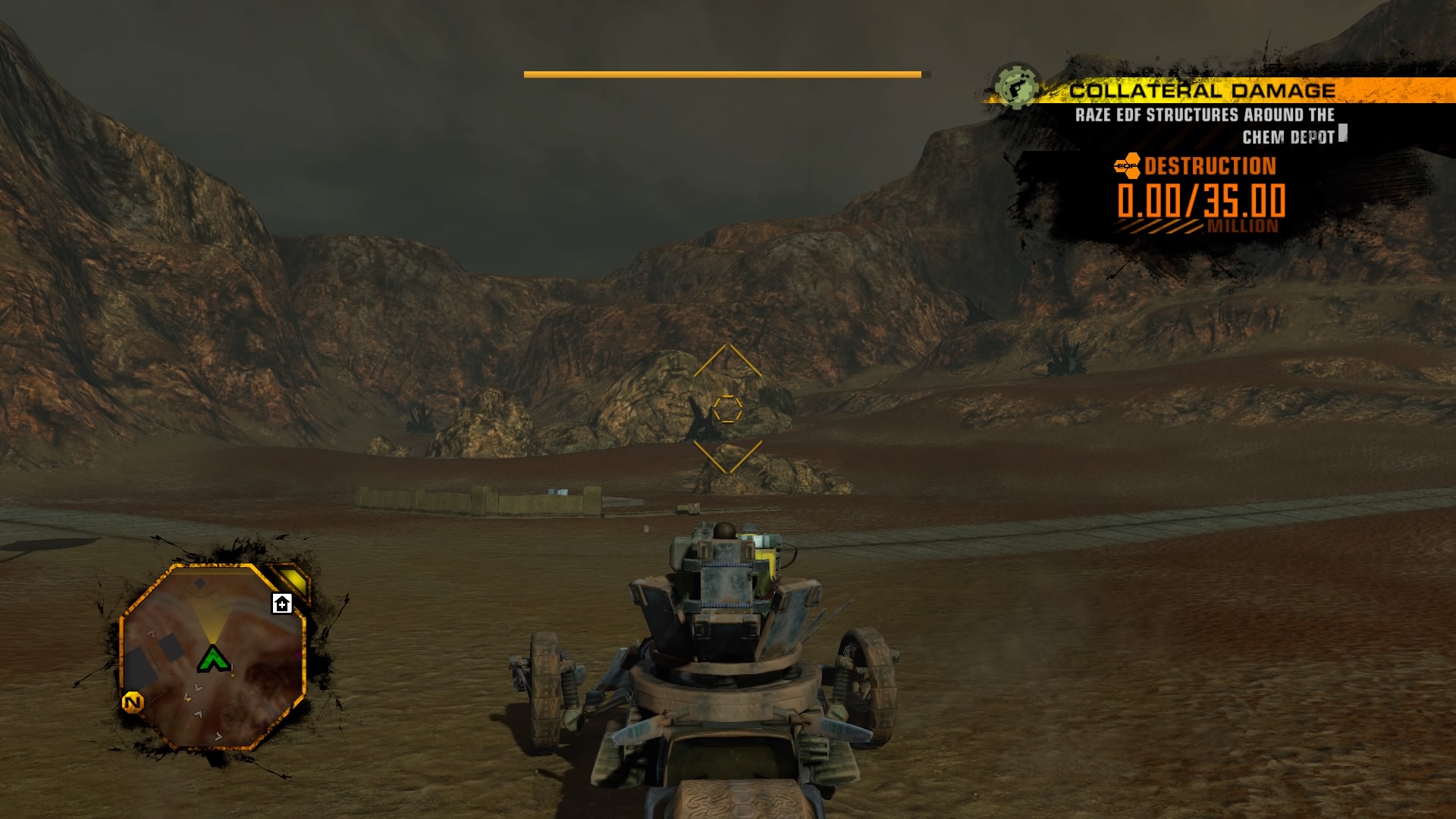 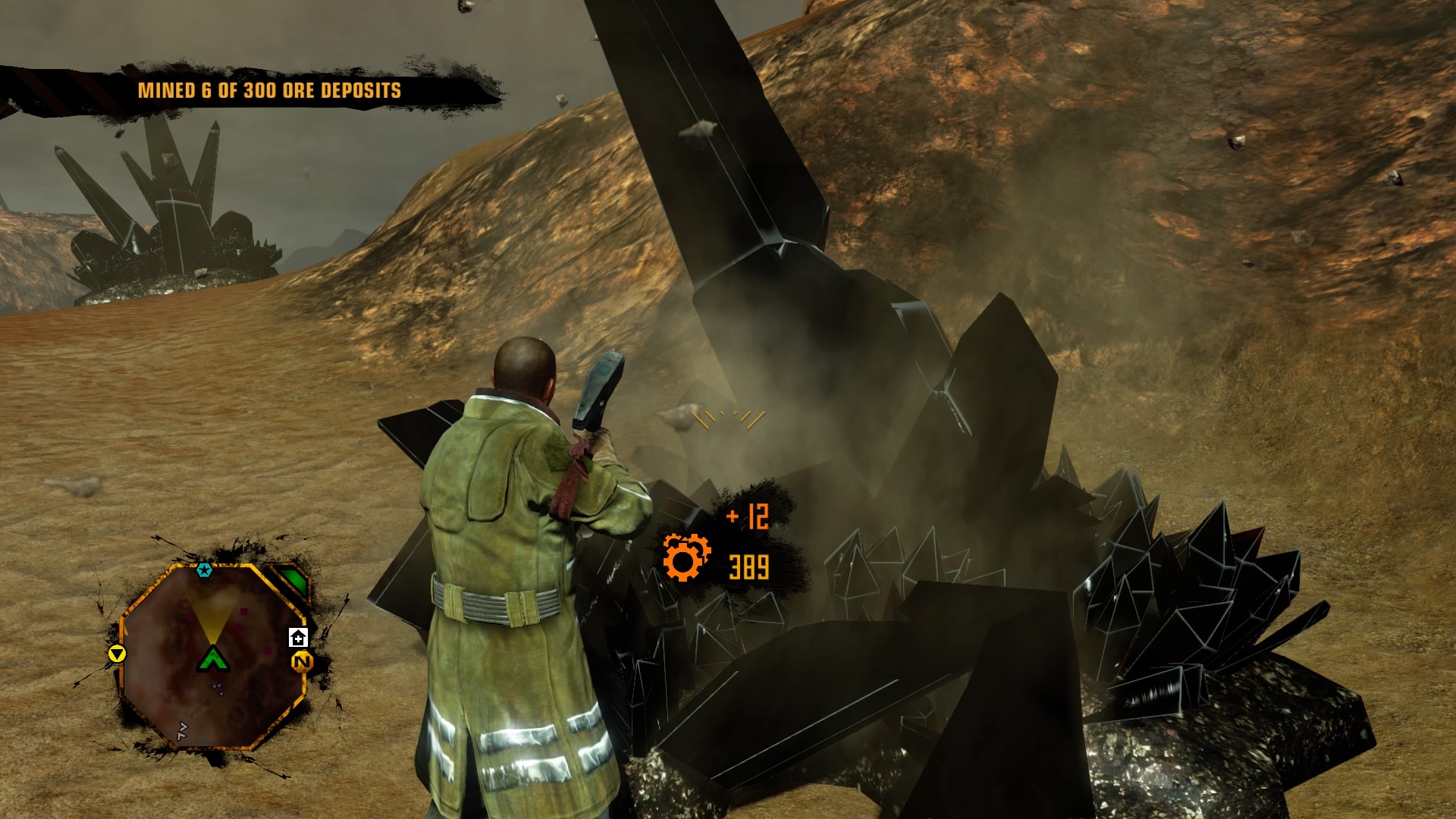 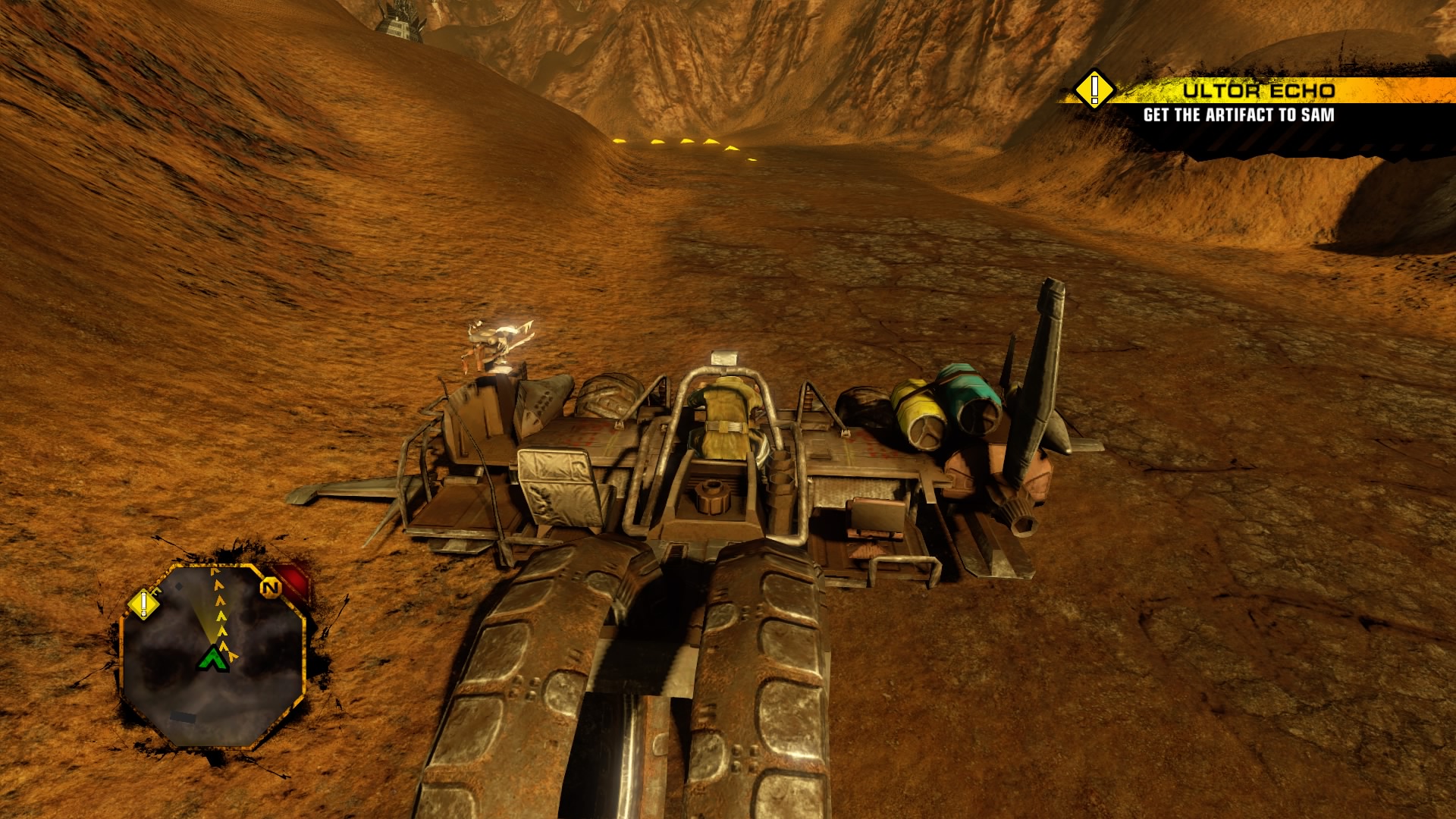 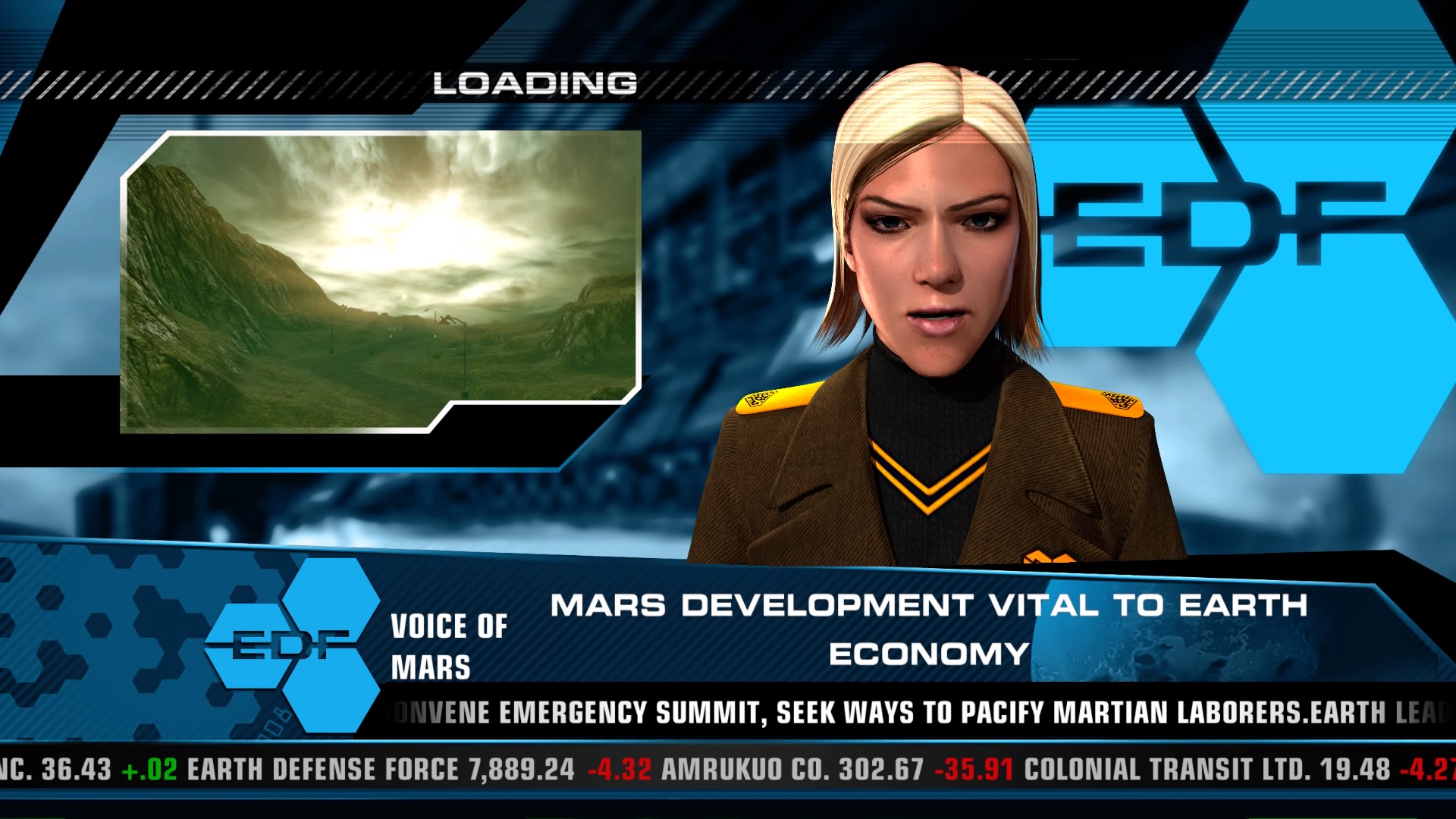 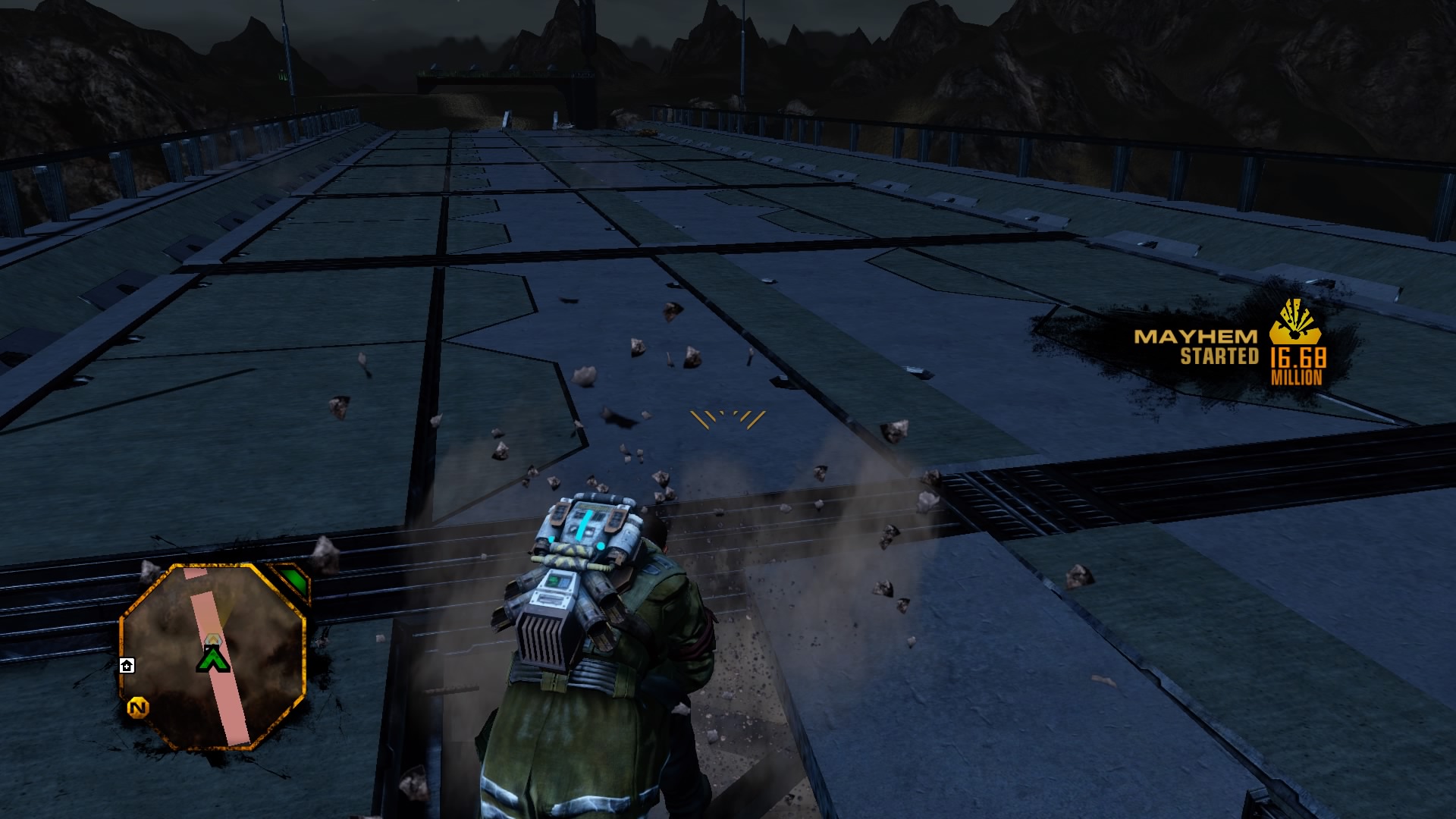 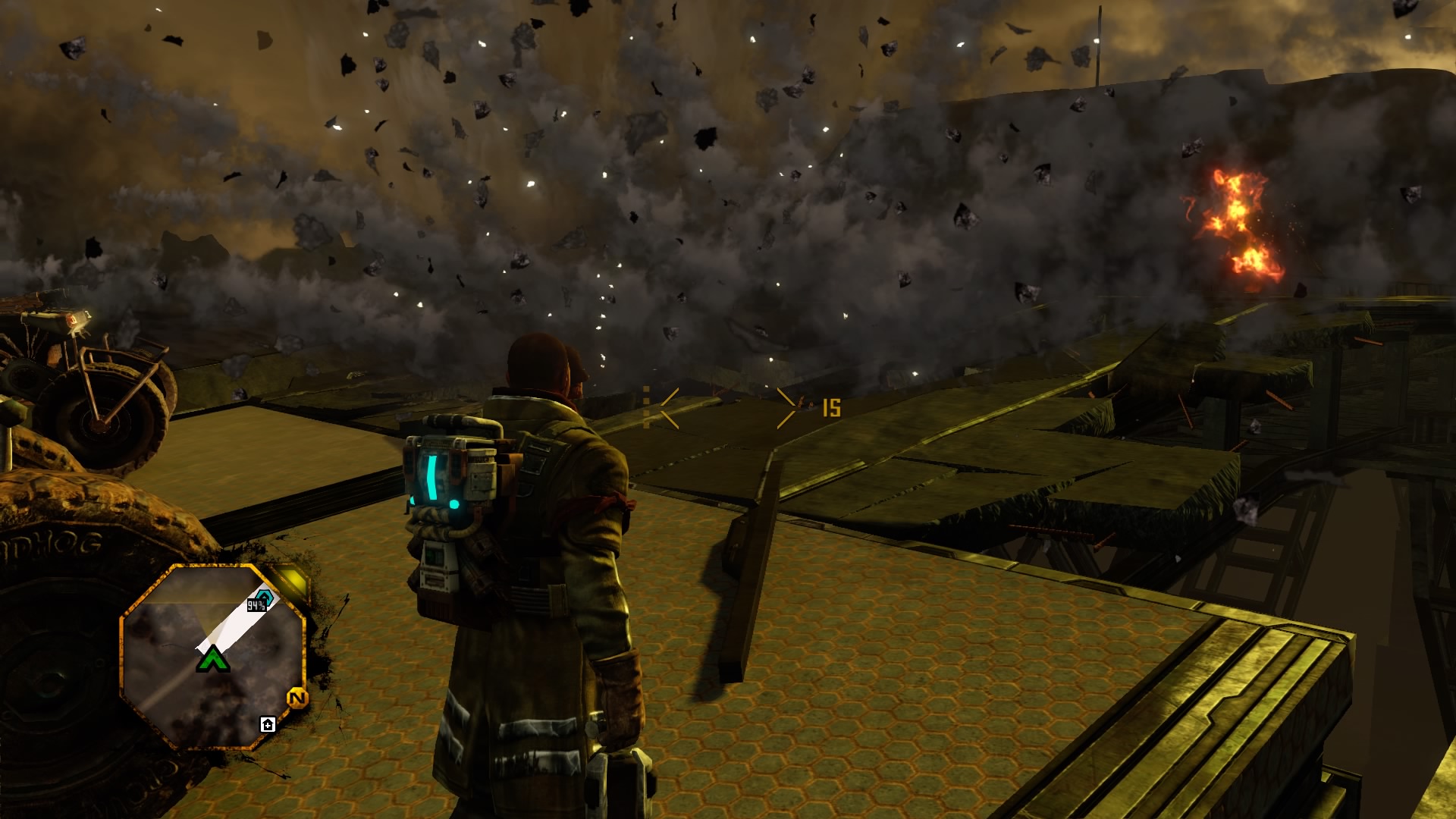 Unfortunately, doing side missions isn’t really optional; like in Saints Row 2, another Volition title, the player must complete a certain number of side missions to reduce EDF control and unlock the main story missions. The side missions generally lack much variety, however, and performing hostage rescues or raids soon becomes repetitive once you realise that there are seven territories in the game that need to be liberated. As a result, the game certainly has a lot of content, but a lot of it feels like repetitive padding.

The actual combat against EDF goons is a bit of a mess. Mason can’t take many hits from enemy fire, and there aren’t many armour upgrades. There is a cover system, but Mason is very picky about what he will hide behind, and the cover is destructible just like everything else in the game.

As a result, cover is not something you want to depend on too much. My solution was generally to run in like a maniac, fling enemies across the room with my mighty sledgehammer, and then retreat for my health to regenerate before starting the process again.

My other solution was often to commandeer the biggest vehicle I could find and just ram my objectives. This was generally quite satisfying, but the driving physics were quite floaty and imprecise. I suppose this makes sense, considering that Mars has approximately ⅓ Earth gravity.

However, this physics lesson is cold comfort when my mission-critical vehicle has flipped upside down and I need to repeat the mission from the start because there is no way to get the car back on its wheels.

Visually, the game is a bit of a mixed bag. The character models haven’t aged very well, but still convey what emotions they need to in the game’s few cutscenes. Whilst each of the separate zones in the game feel distinct from one another visually, there is a washed out filter that was typical of games of that era, which makes the game quite uninteresting to look at.

Although it does fortunately evolve from the boring red and brown mountains and hills that the game starts with; Mars is overall not that nice to look at. I at least liked how the game drip-fed mechanics like fast-travel and the jet pack over time, as it gave the map a sense of tangible vastness at the beginning.

In terms of performance, it runs fairly well, which is impressive considering how many different objects the game needs to keep track of. However, I did experience several crashes during loading screens, which was annoying. The load times themselves were quite long.

The “Re-Mars-tered” edition comes with all of the game’s additional downloadable content. One of these is Demons of the Badlands, a single player prequel chapter showing the origins of Samanya, Alec’s Mars-native supporting character.

This was actually a lot of fun, as Samanya begins with most of the game’s weapons and upgrades, allowing the player to cut loose a bit more.  However, it suffers from the same pacing problems that the main game has,  as she must complete the same repetitive side missions to unlock the more varied main content.

Red Faction Guerrilla Re-Mars-tered certainly has issues. The plot is practically nonexistent, there are too many escort missions, and the game overall feels buggy and artificially padded. However, it can’t be denied that breaking down whole buildings into scrap with a giant hammer is immensely satisfying.

If you are looking for a simple sandbox to destroy large structures and blow up goons, then Red Faction Guerrilla Re-Mars-tered offers a lot of that. However, the game still feels glitchy and imperfect even in the remaster, and the game will not satisfy anyone looking for much of a story. As it stands, Red Faction Guerrilla Re-Mars-tered is an enjoyable enough time, and the Geo-Mod engine gives the action a tangible sense of freedom. Anyone who enjoys some chaotic action without too much unnecessary context will have a lot of fun with this game.