The Nintendo Switch isn’t exactly hurting for 2D platformers right now. Even so, Double Cross, developed by Canadian studio 13AM Games, adds just enough personality with its inter-dimensional setting and colourful cast of characters to make it stand out. It doesn’t quite reach its full potential, and there are certainly avenues for improvement. That said, Double Cross is still a lot of fun.

The main character of Double Cross is Agent Zahra Sinclair. She works for RIFT, a Men In Black-style organisation that maintains peace and order in the multiverse. Right at the start of the game, RIFT is attacked by a mysterious masked figure called Suspect X. Someone in the organisation helped Suspect X infiltrate, so Zahra has to travel to three different parallel Earths to acquire clues, uncover Suspect X’s plan and unmask the mole in RIFT.

Each different Earth is split into 4 separate stages, each with their own different gimmicks.  They have some fun themes, like the Mad Max-wasteland world populated by dinosaurs, or the futuristic Blade Runner world run by robots. In each level, Zahra must jump across platforms, solve simple puzzles, and punch enemies. However, her signature ability is the Proton Slinger, a sort of grappling hook that can be used to launch Zahra from grappling points, as well as grabbing and throwing objects.

Although Zahra’s moveset doesn’t really expand beyond a handful of special combat moves, it is impressive how much variety Double Cross injects into its levels using the Proton Slinger. These include levels where Zahra must throw different types of goo on the walls and floor to give them different properties,or where you grapple onto balloons that fly in the air.

These don’t make each level feel dramatically different, but it gives the game a sense of variety as you look forward to the next new mechanic. The Proton Slinger gives Double Cross’ levels a sense of verticality and freedom, which made them rather fun to get around in.

The level of difficulty is just right, giving some moderately difficult platforming challenges without feeling frustrating. Falling into a pit or losing all of Zahra’s health just puts you back at the nearest checkpoint, which are plentiful.

In addition, each level contains a certain number of Upgradium, which are items which level up Zahra’s abilities. The player can slot in and out up to three different upgrades, such as giving her a shield, making her heavy attacks stronger, or eliminating the damage from falling into a pit. It adds a small layer of customisation so that players can prepare Zahra for different types of encounters, and the upgrades can be swapped out at any checkpoint. 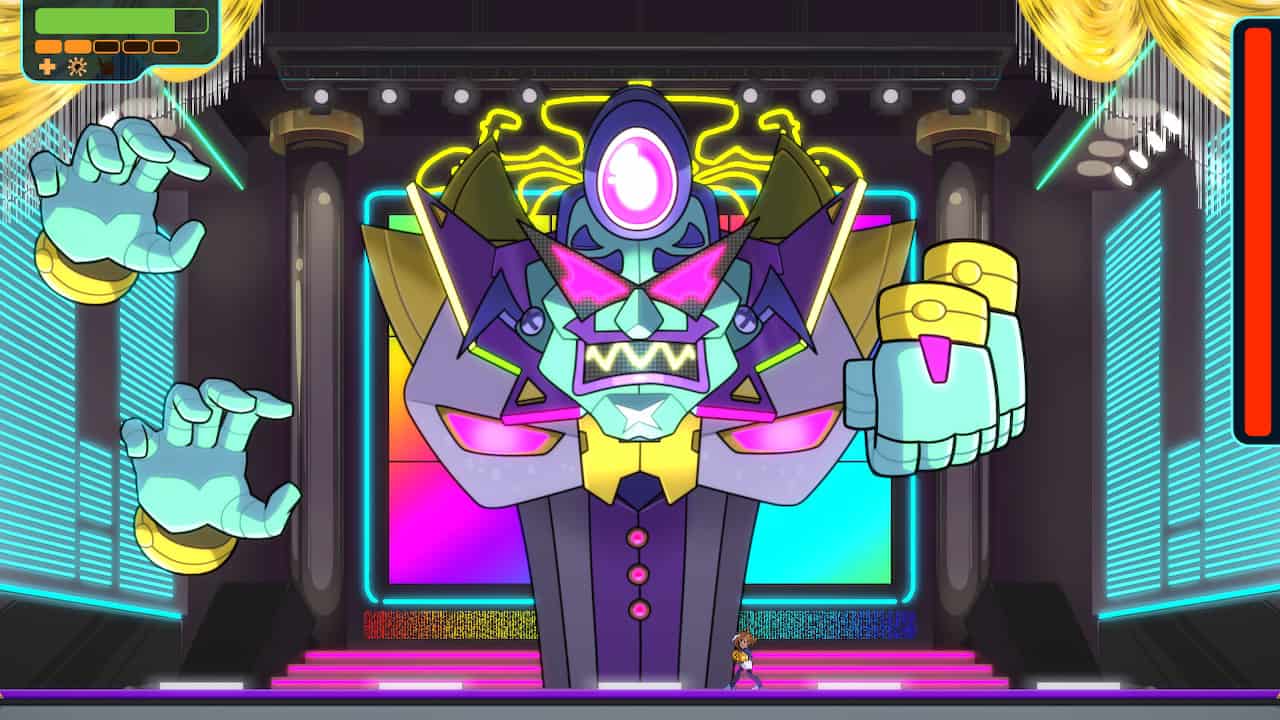 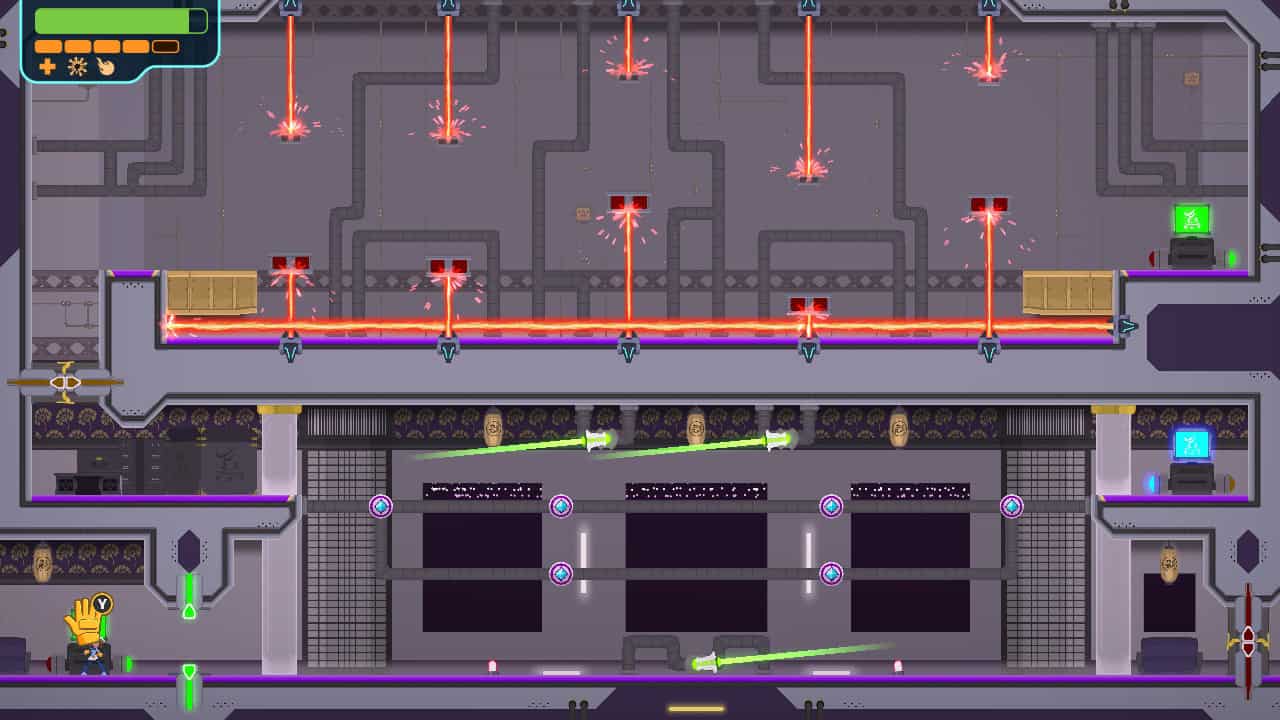 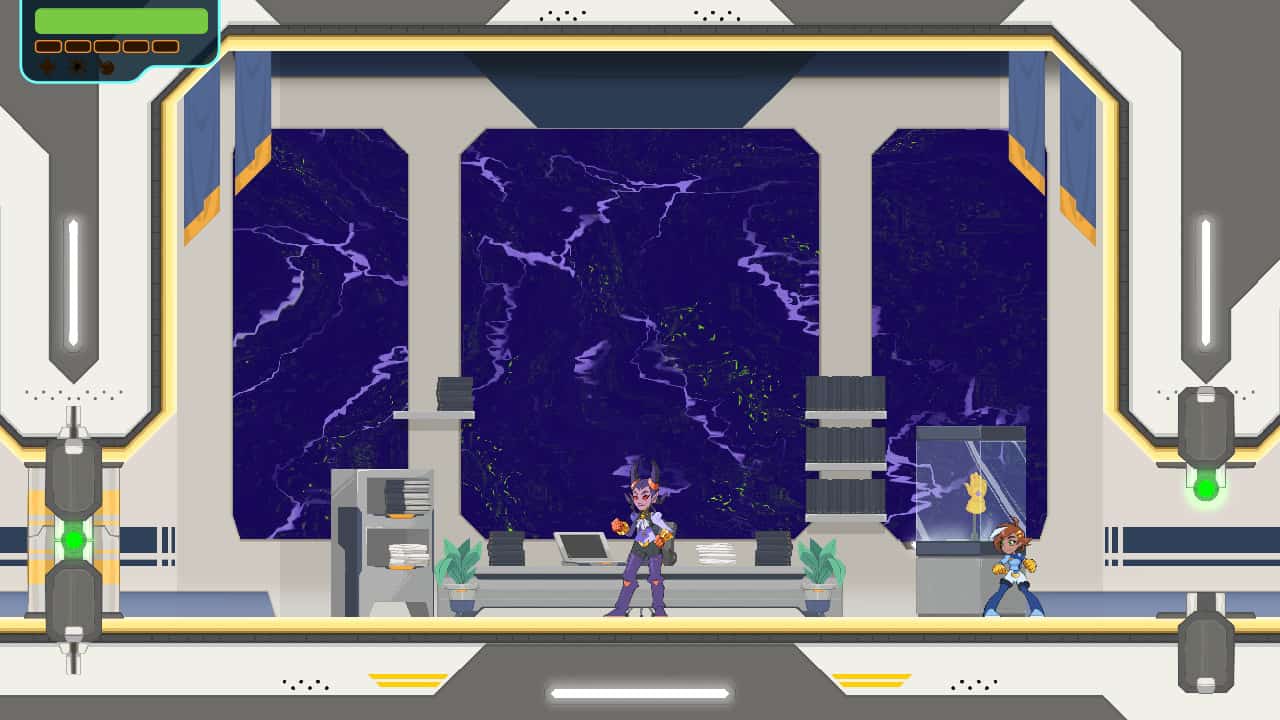 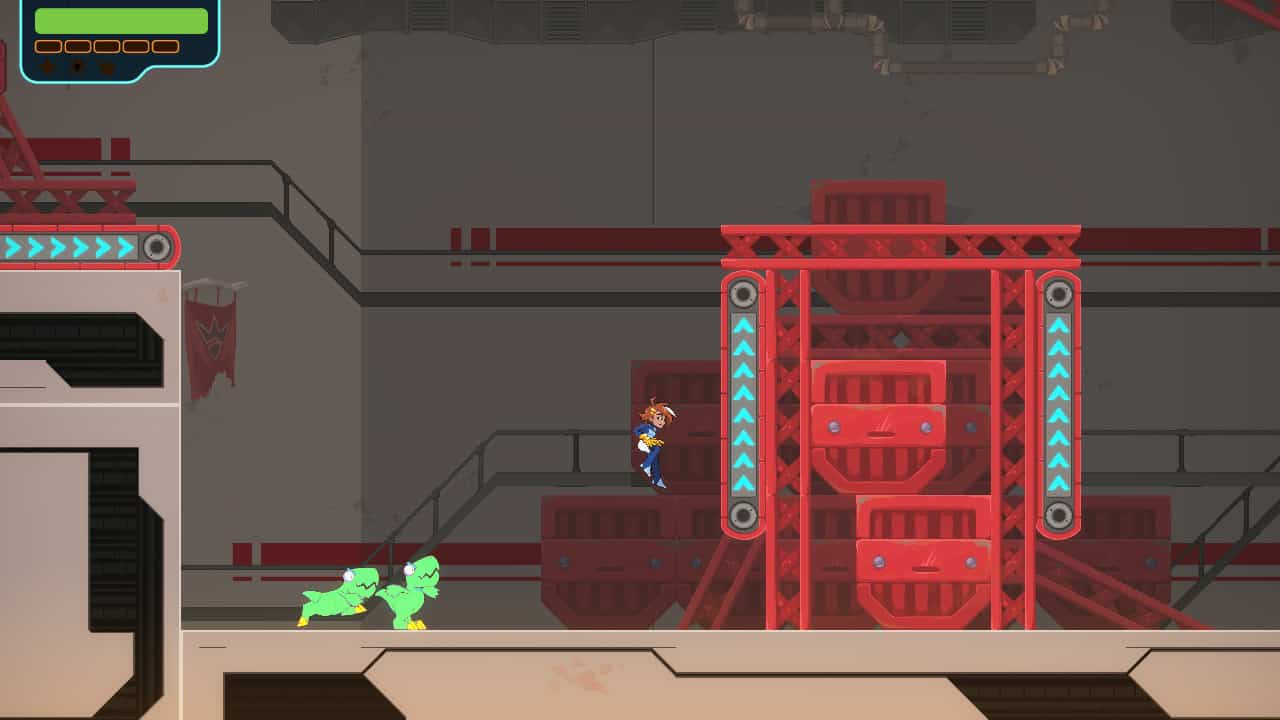 “…combat isn’t bad, but it is fairly straightforward and doesn’t really evolve.”

What I wish did have that sense of variety is Double Cross’ combat. The combat isn’t bad, exactly, but it is fairly straightforward and doesn’t really evolve. There is not a large variety of enemy types, and all of them are vulnerable to just punching them and dodging out of the way when they ready an attack.

Giving some enemies weak points, or incorporating the Proton Slinger in more ways to damage enemies, could have given the combat more flavour. Even adding enemies that are weak only to certain moves, like in Guacamelee 2!, may have made the combat a bit more thoughtful. However, the fighting aspect wasn’t as exciting or engaging as the platforming was.

When you aren’t jumping and punching your way through different dimensions, you are hanging around the Extraverse, the home base of RIFT. There, you must give the clue items acquired in levels to specific characters to further the plot.

Figuring out who should be given which item is a fairly uncomplicated process, and there isn’t any penalty for choosing the wrong character. I quite liked exploring RIFT and talking to the quirky NPCs that populate the place, not knowing which one might end up being Suspect X’s mole.

There are fun little background stories that advance in RIFT, such as the tentacle monster who wants to become an agent, or the sentient pineapple undercover agent who is trying to prevent his girlfriend from being deported. None of the characters are all that deep, and the story overall has the tone of a Saturday morning cartoon, but it was enough to make me care for them and want them to succeed.

That said, I found the investigation element to be rather half-baked. The game is called Double Cross, and yet the player has little agency regarding uncovering the traitor within RIFT. As you acquire clues which provide alibis for various RIFT agents, it steadily whittles down the list of suspects, and yet the player isn’t offered a chance to make any of those deductive tasks themselves. 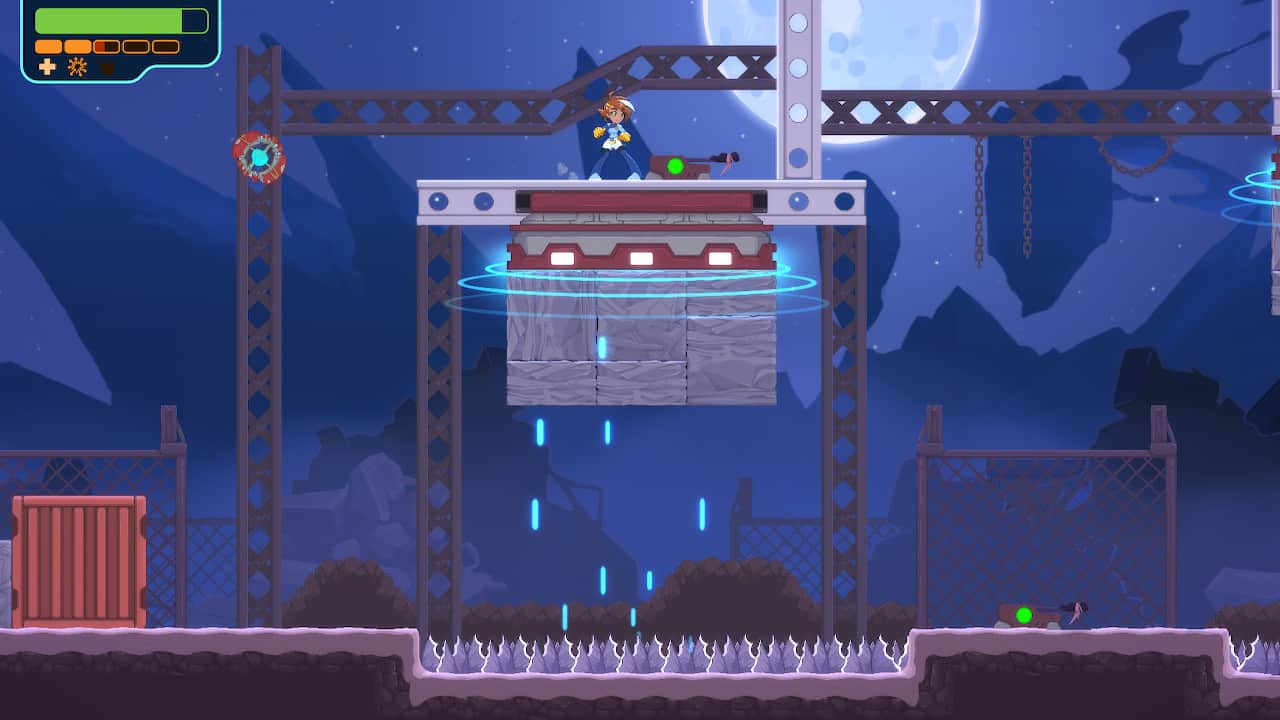 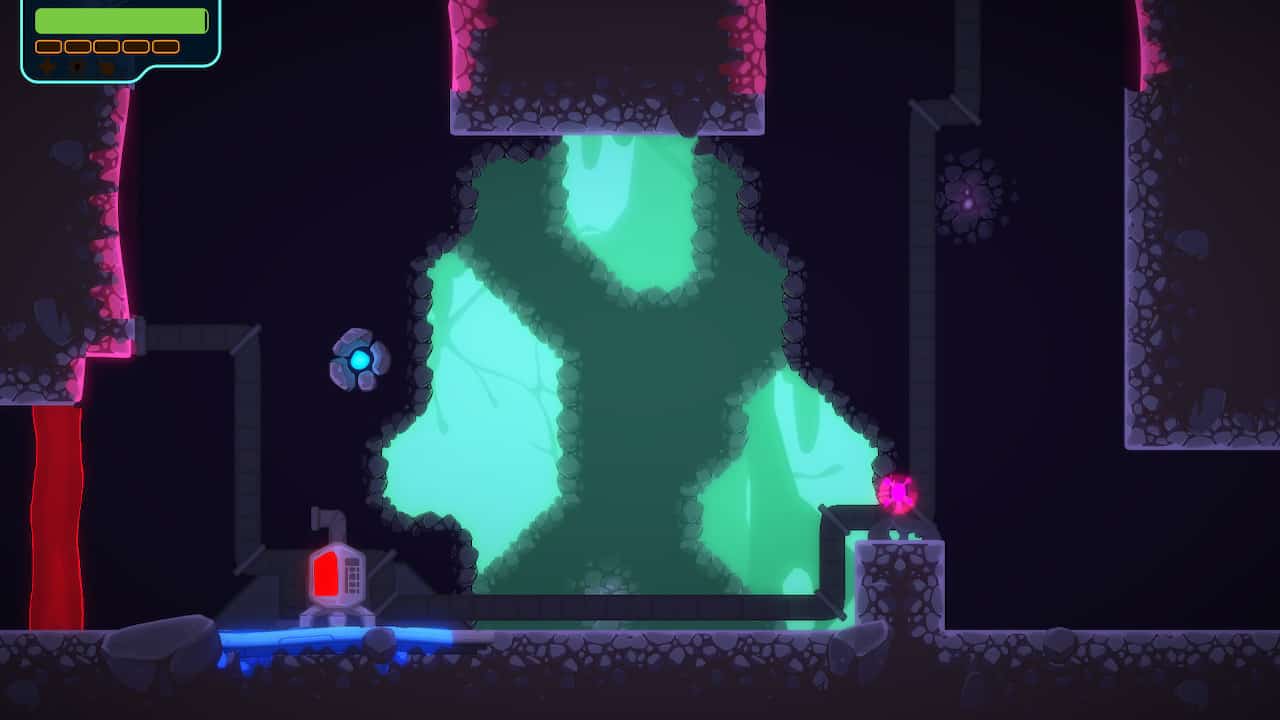 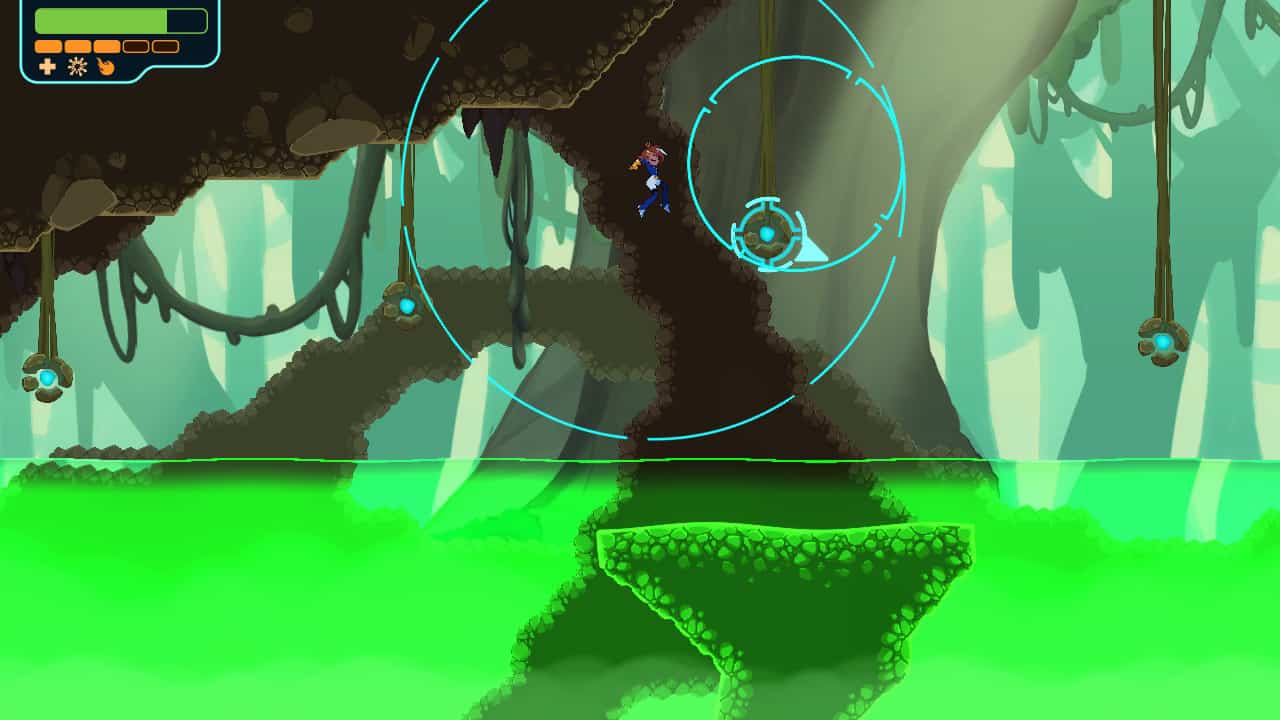 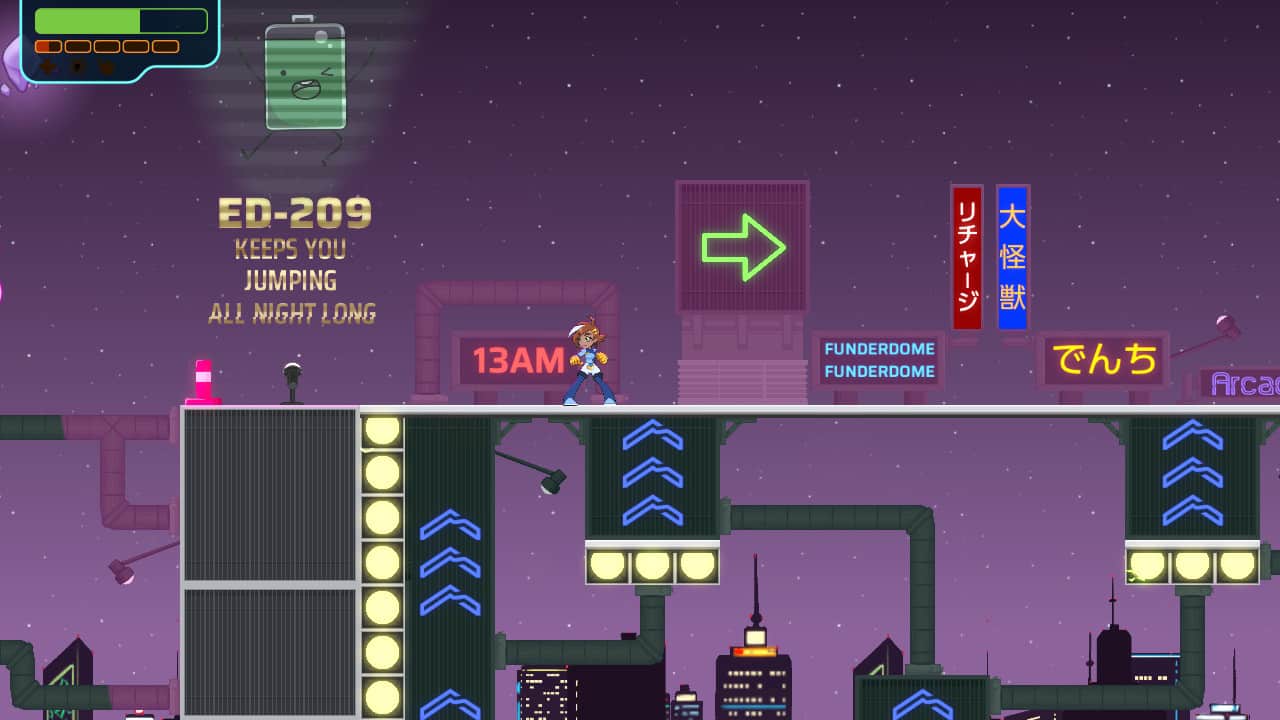 I was looking forward to having to make judgments based on the information the player acquires in Zahra’s Case Files, yet the game railroads that portion of the game so that the investigation happens entirely within cut-scenes. I felt like the double crossing narrative aspect added a sense of tension, but it could have been more extensive.

Overall, the game isn’t that long; a playthrough will take you about 6-8 hours, depending if you go back and hunt for all the Upgradium. However, for the type of fun, bite-sized experience it is going for, it doesn’t overstay its welcome.

Double Cross could probably have done with a better title, as if you are going into this game looking for gameplay about exposing a traitor, you may be disappointed. Yet whilst the investigation aspect of the game may only be a comparatively minor aspect, Double Cross’ actual gameplay is a lot of fun, and mines a surprising amount of variety from a small number of mechanics. If you are looking for a fun, bite-sized platformer on your Switch or PC, you could do a lot worse than Double Cross.