Slay the Spire Review – It’s all in the cards

I’m a huge fan of collectable card games, but even I’ll admit the genre begun to feel a bit formulaic. These strategy games typically had their own unique features to separate themselves from one another, but when you drilled down to the core, it’s hard not to see the overwhelming similarities. Slay the Spire is a strategy card game, but it’s completely unlike anything else. Slay the Spire isn’t interested in a competitive multiplayer scene, instead it creates a single player challenge that retains the strategy, retains the deck-building, but adds some engaging and unique features.

It’s a game that has been apart of Steam’s Early Access since late 2017, and throughout that time it’s built up a large and happy player base. The game has now released in complete form, and I can say firsthand it’s certainly worth jumping into.

Slay the Spire can be aptly described as a combination between a deck-building card game and a roguelike. It’s a single player experience where you progress through dungeons, fight monsters, acquire new cards and other powers, and eventually make your way to the end to attack the heart. The game progresses at a very natural pace and it actually solves what some perceive to be a large issue for the card game genre. Slay the Spire is accessible in a way not many other card games manage to be. It will still force you to learn how to craft a well balanced and synergised deck, but since you’re acquiring cards as you progress on your journey, that deck-building occurs slowly over time rather than all at once. The way you take down your foes is also very simple to grasp with a basic attack / defence system and the ability to read your foes intentions to give you a good idea of how you should play your turn.

The roguelike mechanics are where things get fun and interesting because naturally, any death sends you right back to the beginning. Your runs will evolve as you play and you can never really anticipate what kind of cards or powers you’ll have by the end. With so many different cards, relics (which are passive powers), and powerful combinations, one run may feel completely different to the next.

Slay the Spire also has a clean and simple visual design that highlights all of the necessary information to the player. It’s very useful in this kind of strategy game because things never get overwhelming here, yet there are still a lot of elements at play. The art direction of the game is very functional and readable in this respect, but I’d be lying if I didn’t say I wish it looked a little prettier.

The game telegraphs the intentions of your foes before they play their turn. It’s a mechanic that reminds me of Into the Breach, and I’m coming to really love it as an element in strategy games. It means you have all of the information you need to do the best move possible. Your only limitation is whether or not you have the cards to deal with the impending threat. It makes clever deck building a necessity, and cleverly playing around your deck, your potions, and your relics is important.

After a few runs you’ll start to realise that Slay the Spire has a lot of content. You’ll be unlocking new cards as you play, unlocking new heroes who each play differently from one another, and collecting powerful new relics you’ve never seen before. There’s also daily challenges, custom games with huge modifiers, and a variety of different encounters that include boss fights, smaller fights, treasure chests, merchants, and random encounters. 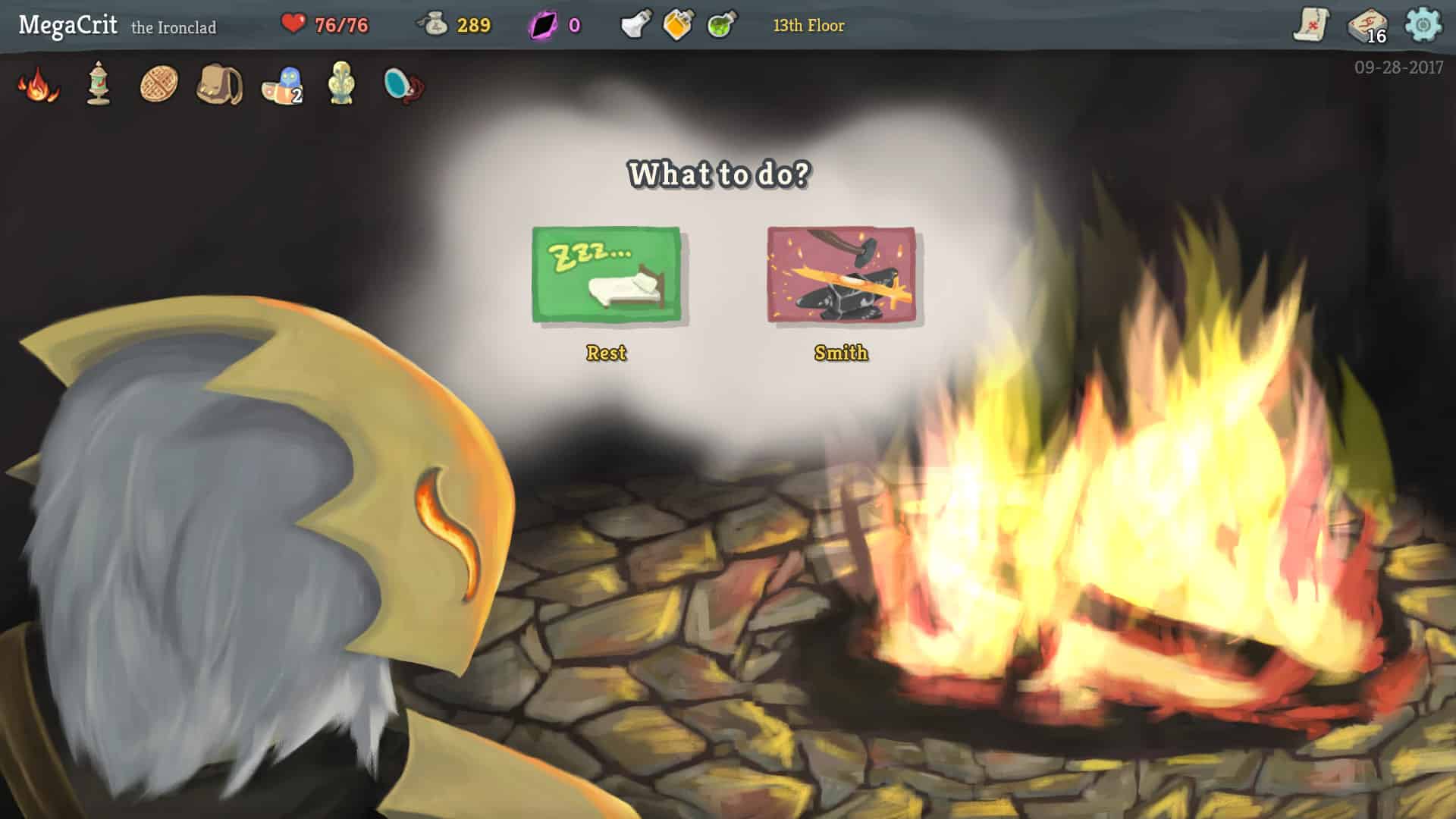 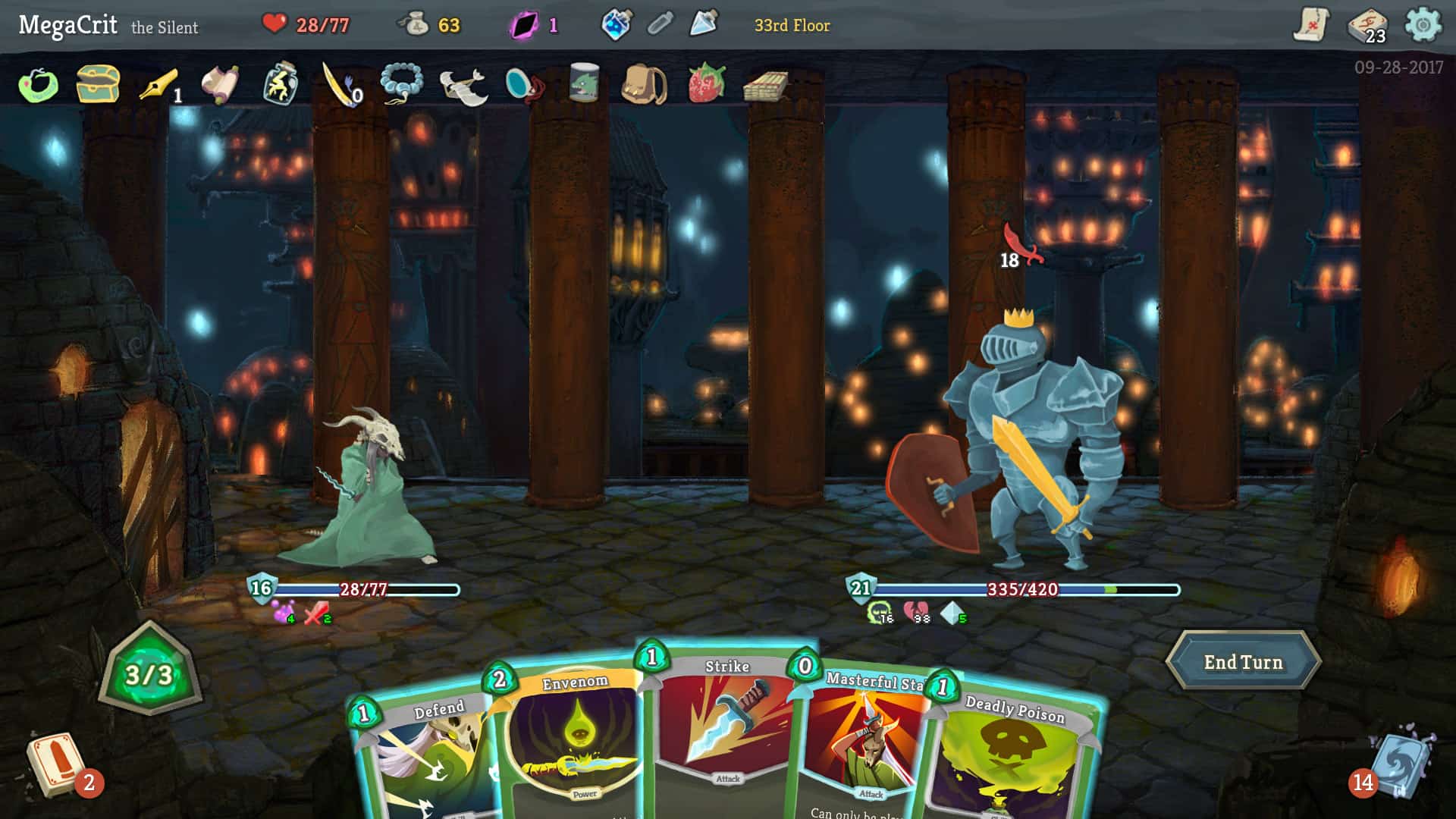 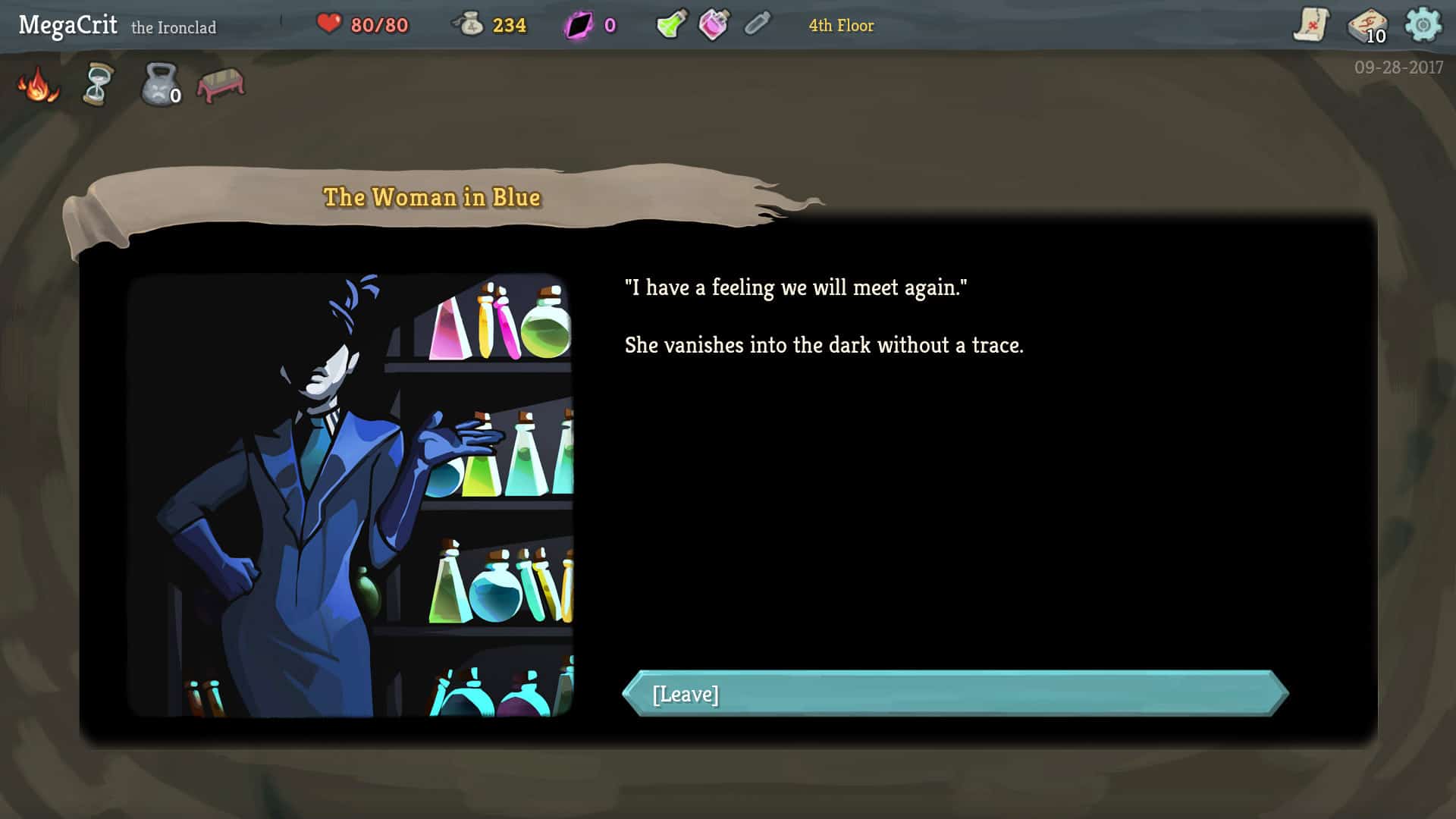 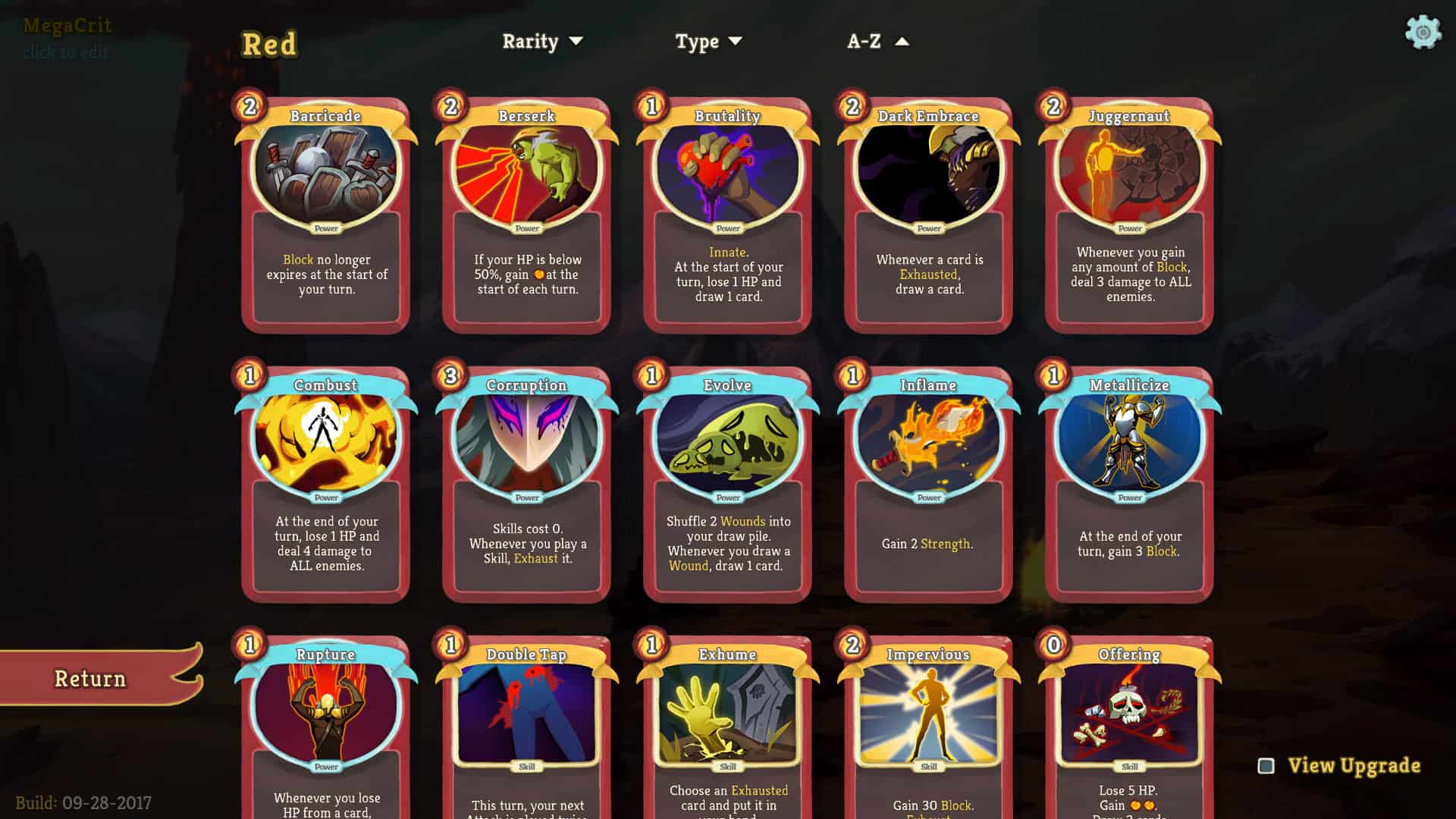 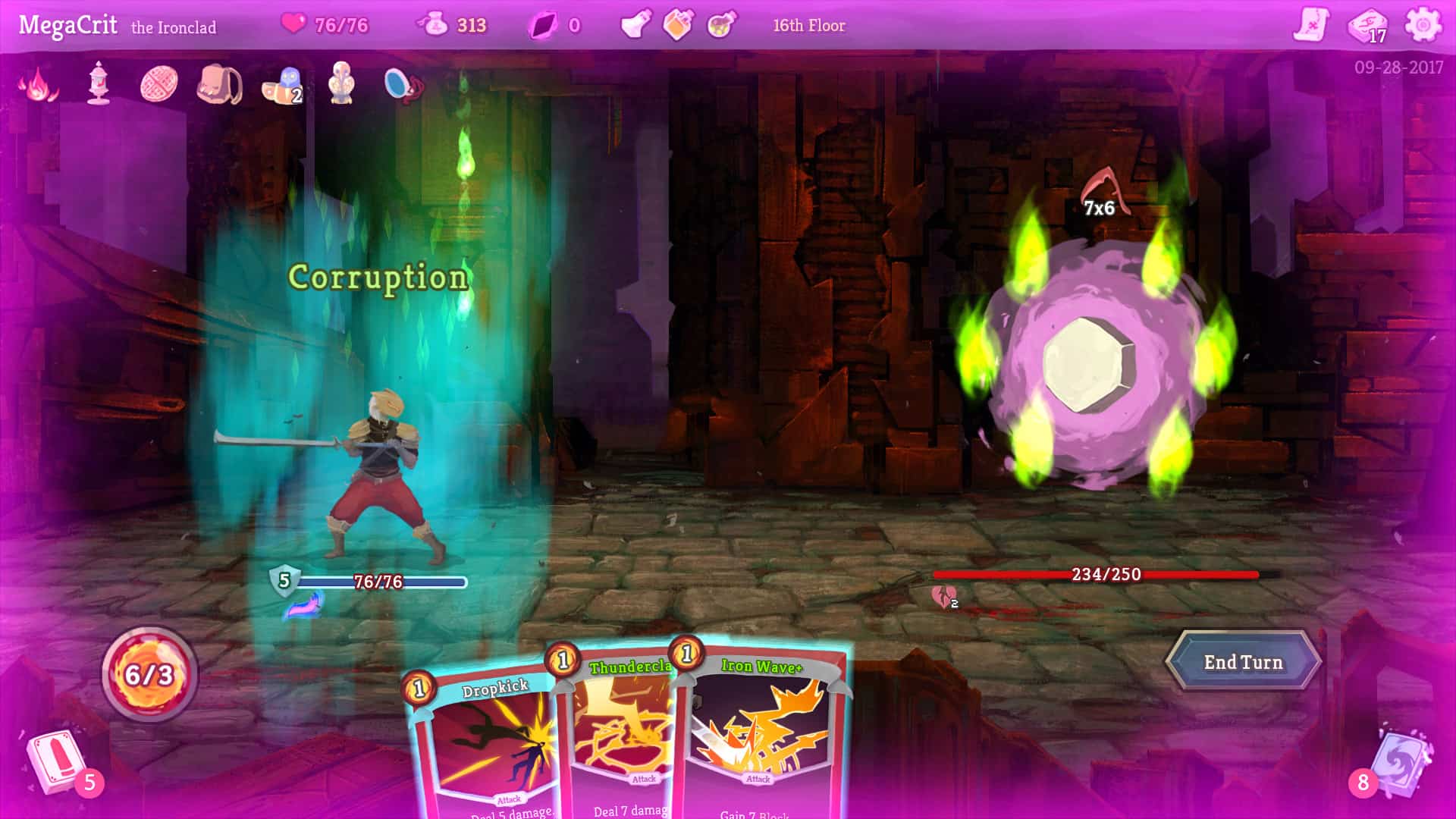 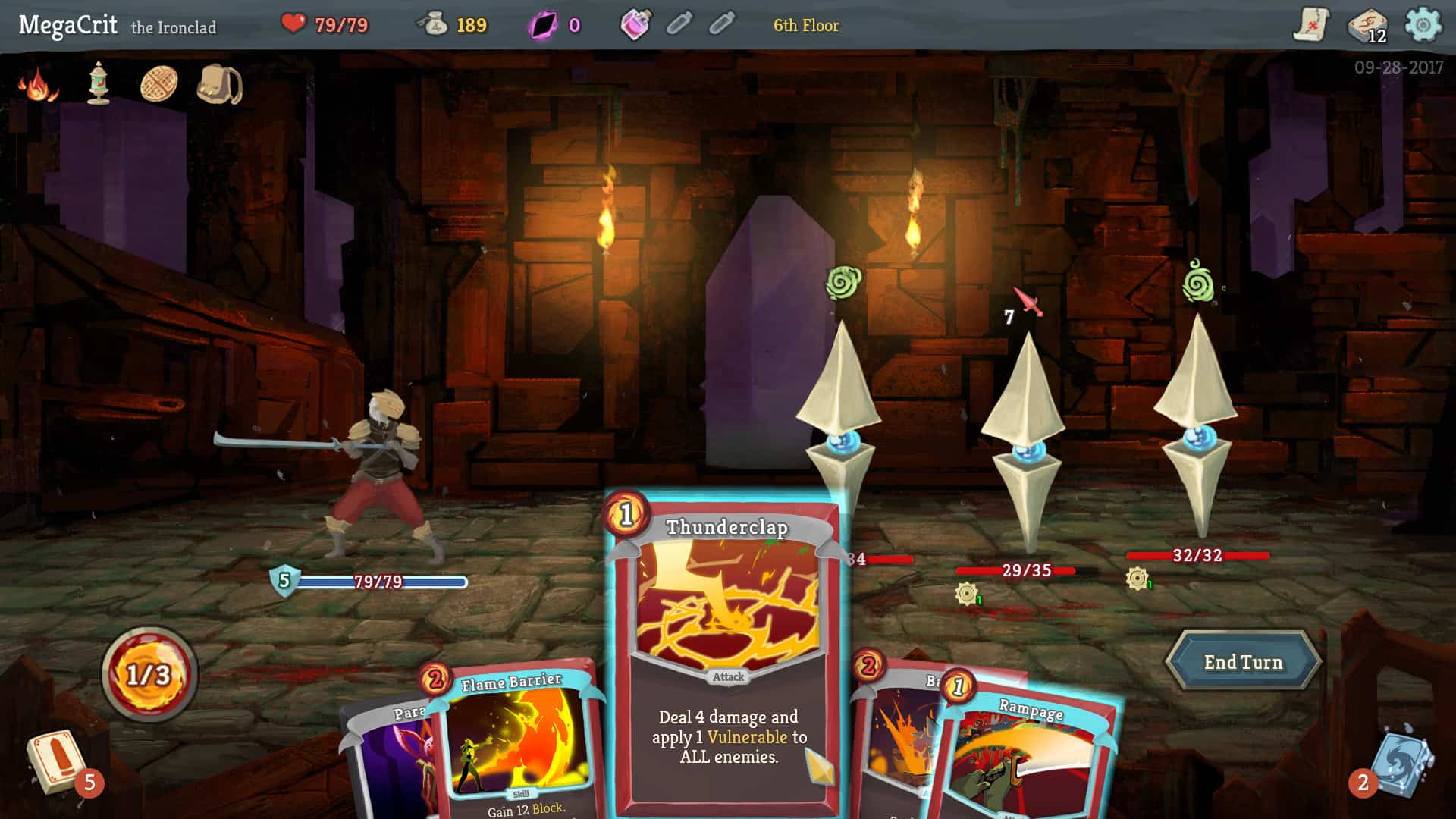 The variety of  content is impressive although I have to admit I completed a run pretty quickly. Slay the Spire has 3 dungeons which you progress through, but part of me wishes there was more. I don’t know if it’s because I have a history with card games or if the game was simply easier than I anticipated, but I managed to beat the game on only my forth attempt. I had beaten the game before I had learned enough about it and before I felt I deserved to. Naturally Slay the Spire is the kind of game meant to be played and beaten time and time again. It’s highly replayable and the fact that I was able to beat it so early and then beat it fairly consistently thereafter didn’t ruin my experience. In fact, for some, Slay the Spire’s difficulty when compared to other roguelikes is probably a big positive. Although for me it doesn’t feel like the kind of game that’s exciting to win. It doesn’t feel like the kind of game where you had to overcome great adversity to succeed. And that’s a bit disappointing.

Slay the Spire is really only just starting its journey. In the first 15 minutes of playing the game you know the developers have stumbled onto a winning formula. Everything about my experience with the game, how it’s balanced and how it’s designed, everything just works cohesively. The game already has a passionate fanbase and it will be exciting to see where things go from here. Mega Crit Games have already announced their plans for future content, more playable characters, and ports to other platforms such as the Nintendo Switch. On top of all of these plans is the dedicated modding community who are already working hard on Slay the Spire. With Steam Workshop support already available, Mega Crit Games have made it very easy for both modders and players to create or discover new content, making an already massively replayable and varied game even more replayable and varied.