After releasing Mass Effect: Andromeda back in 2017 it became clear that BioWare had lost a little bit of what made them special. They lost some faith in their dedicated fans and were in a position where they needed to prove who they were as a studio again. In walks Anthem, a hugely ambitious title that was ready to reclaim any respect lost and set the studio on a new path.

Unfortunately after playing the game for a good while now, I can safely say no respect was reclaimed. Anthem is a dull, repetitive, uninspired shooter that fails on fundamental levels. If it weren’t for Anthem’s admittedly enjoyable shooting and traversal mechanics, this game would near the top of my “most disappointing games” list.

I started on my Anthem journey optimistically, and to the game’s credit it does do some things right. As mentioned previously the game’s flight mechanics actually feel quite good. It’s empowering to soar through the air with that level of freedom and because the game’s world is so beautiful it becomes fun to explore. You’ll bump into your fair share of obstacles, sure, but like with all things you’ll get better the more you practice. There’s an overheating mechanic that not only helps balance this powerful tool but it also encourages you to alter your flight path strategically to skim through water or soar downward to rebuild your meter.

The landscapes are beautifully crafted and gorgeous. Visually Anthem is very pleasing but it’s the actual design of the landscape that is the most fascinating. Anthem’s open world doesn’t feel like anything I’ve uncovered before. The actual topography of the surface of the world is bizarre yet functional, and certainly visually appealing. It allows for amazing verticality to the game’s design, something games have struggled with for years.

Combat also feels good, for the most part. A mixture of gunplay and powers, Anthem certainly is adhering to modern gaming trends but it works here. Gun combat feels responsive and solid and if you’re playing as the Storm Javelin (like me) it works as a great intermission between the use of powerful, elemental abilities. Although once again it’s the traversal that stands out with hovering in the air, quick dodging, and flying out of danger to find the next vantage point working superbly in the game’s favour.

It’s here where we start to see Anthem’s cracks, and there’s a lot of them. A fundamental flaw in Anthem’s design is how repetitive and uninspired its gameplay loop is. Every mission feels like the same copy and paste jobs that people have been criticising the MMO genre about for well over a decade. Each mission involved flying over to a location, finding something, defending something or killing something. After about 4 missions I was bored.

What makes things worse is that the mission structure totally flies in the face of any narrative BioWare are desperately attempting to implement. By now I would have sat through hours of dialogue, cut-scenes, and narrative specific content that is completely detached from the gameplay. It feels like I am playing two different games, one is an arduous walking simulator where I slowly amble through a town, talk to the same people, and stroke by stroke paint a larger picture of the world’s universe. The other is a run-of-the-mill looter shooter where you mow down hundreds of enemies while waiting for something to happen that stops them from infinitely spawning.

I actually don’t know what BioWare was looking to achieve with Anthem’s story. There was clearly effort put in, with some amazing voice actors doing some amazing performances. I noticed two voices that were instantly familiar to me from two actors that I greatly respect within the game. It was a delight. Although BioWare also willingly spits on their own narrative when they implement gameplay that ignores and even contradicts the story. I reached a point in the game where any attempt to hide Anthem’s grindy gameplay was ignored and the game instead pops up a checklist of menial yet lengthy tasks for me to complete. So I guess I’m going to stop saving the world now so that I can instead get 50 melee kills? Right. 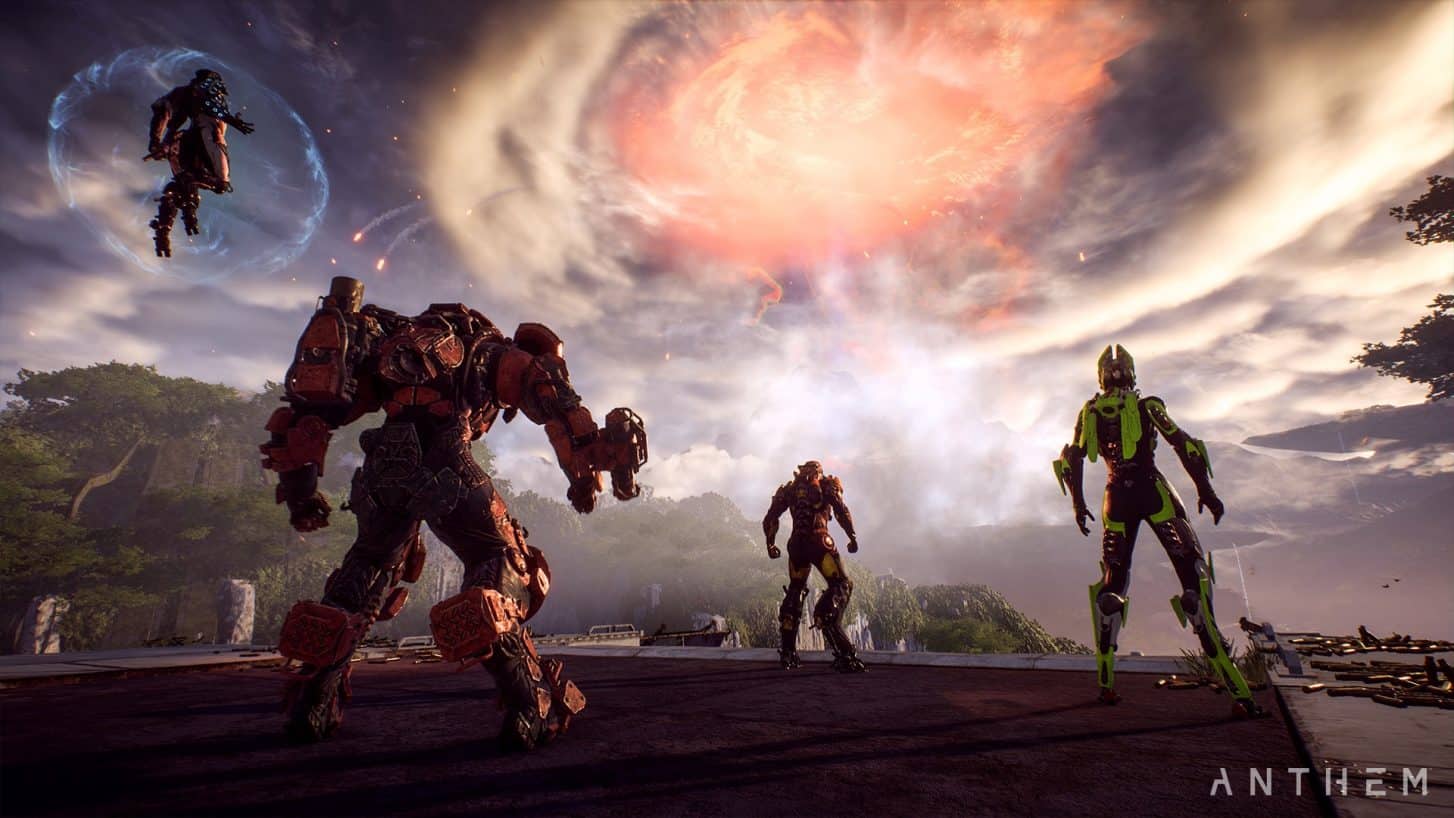 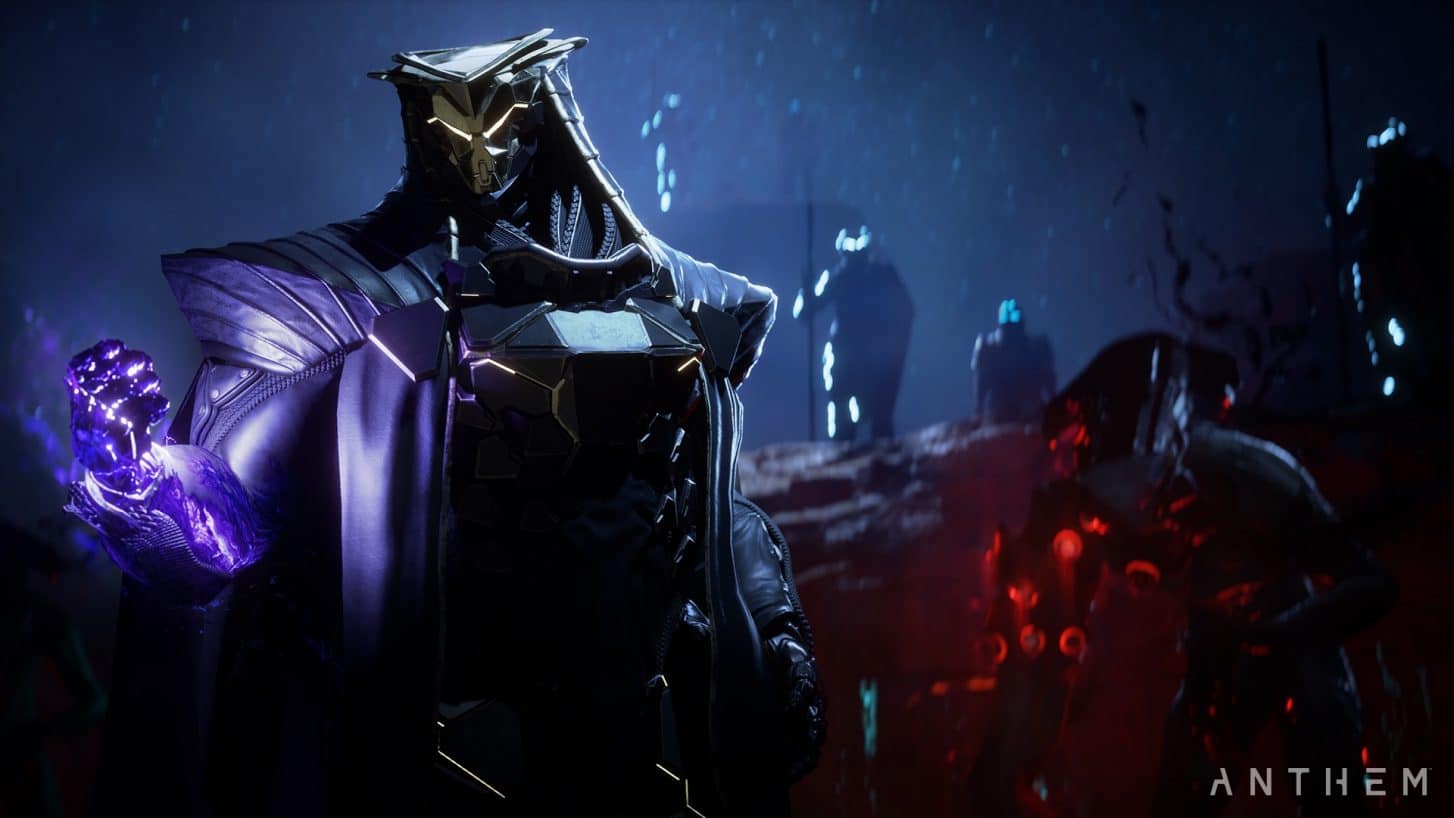 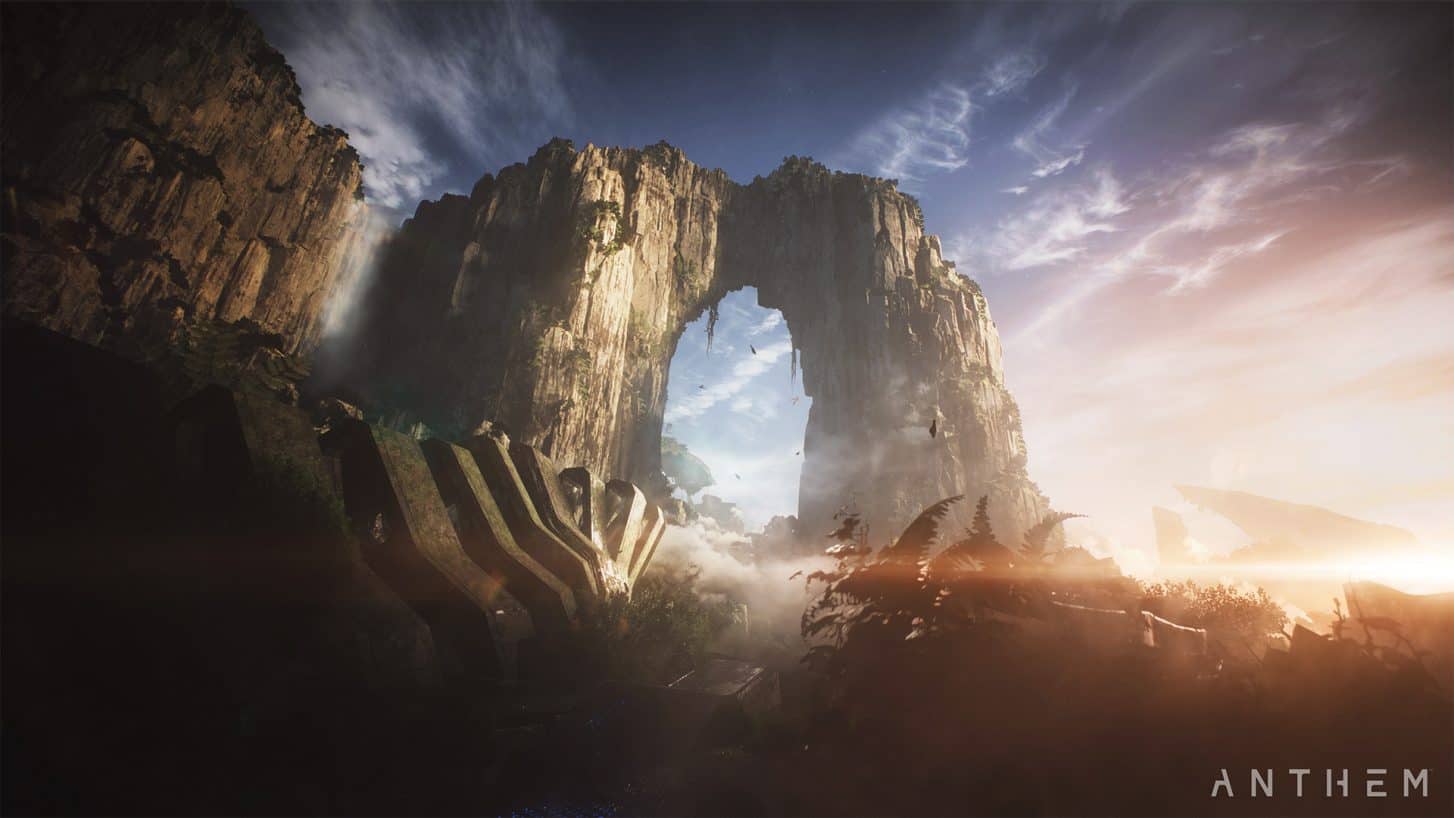 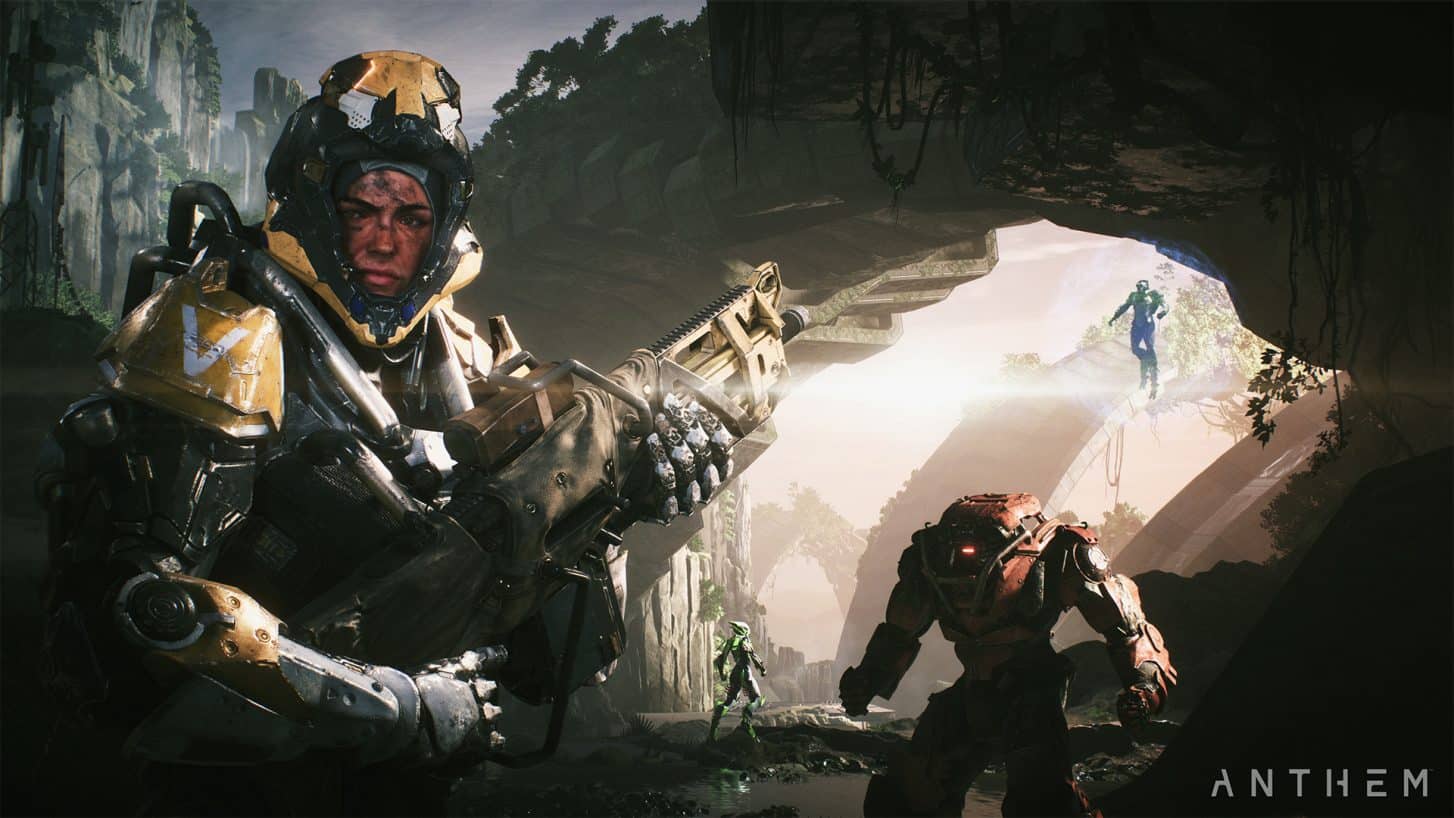 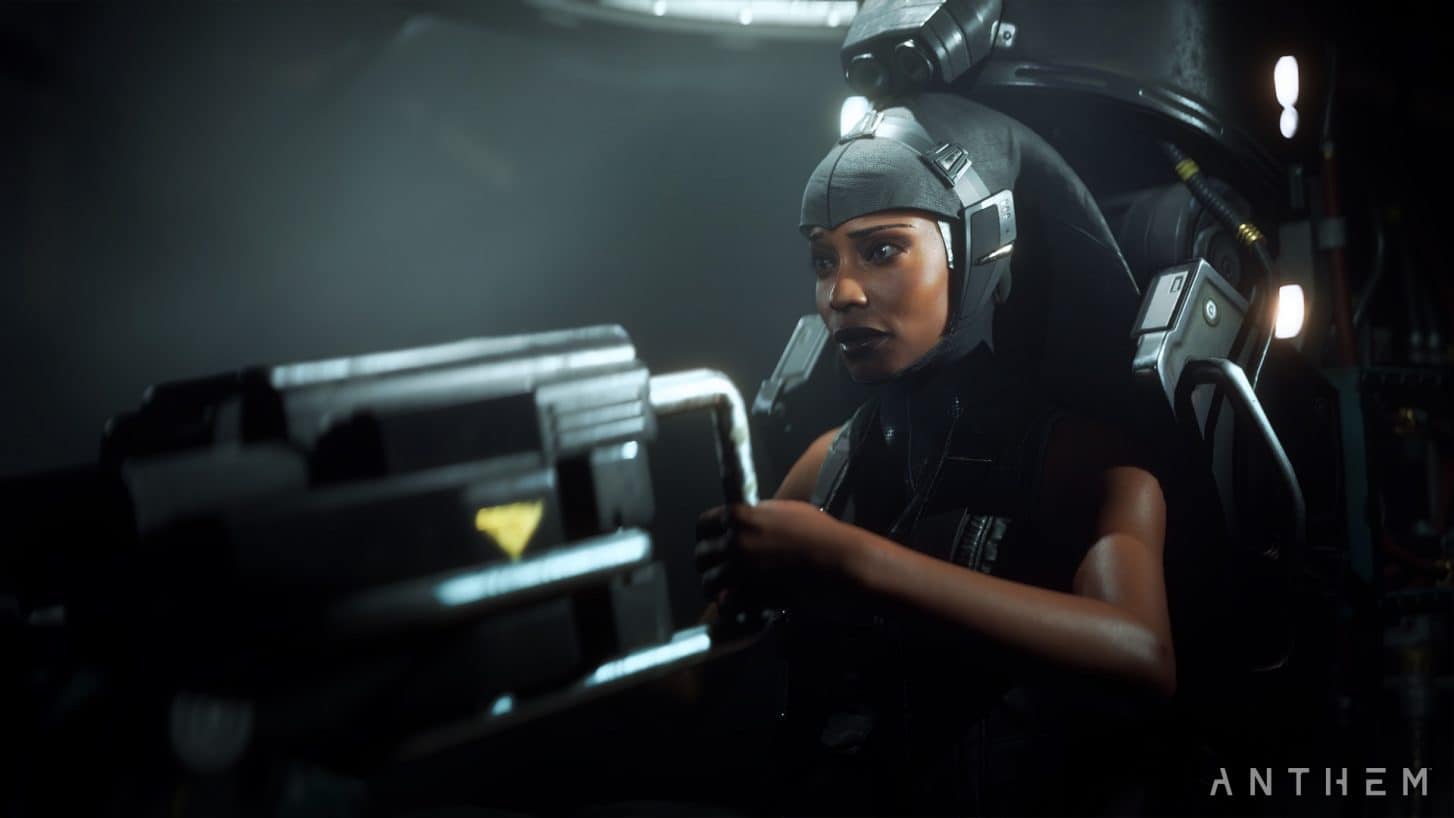 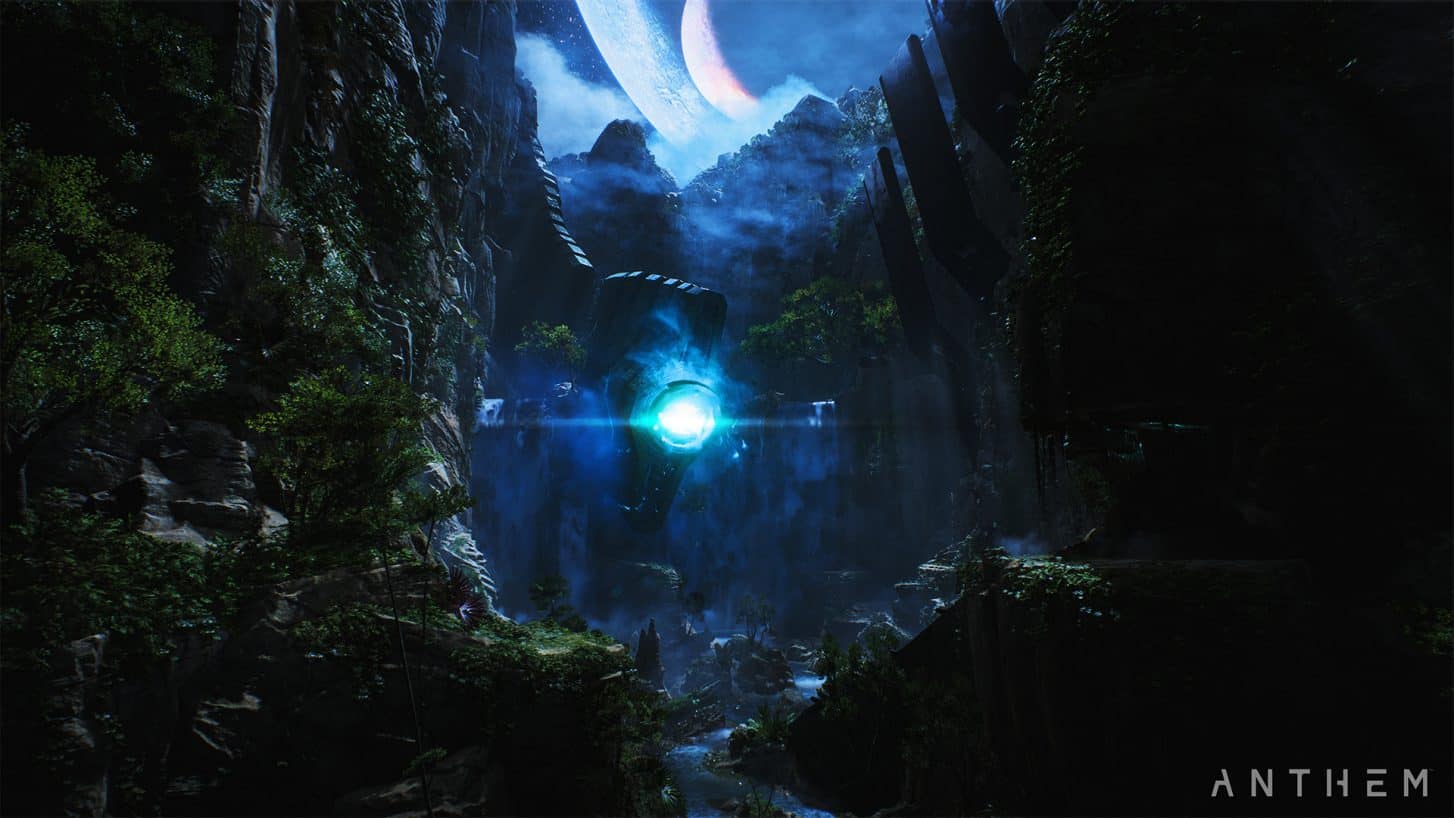 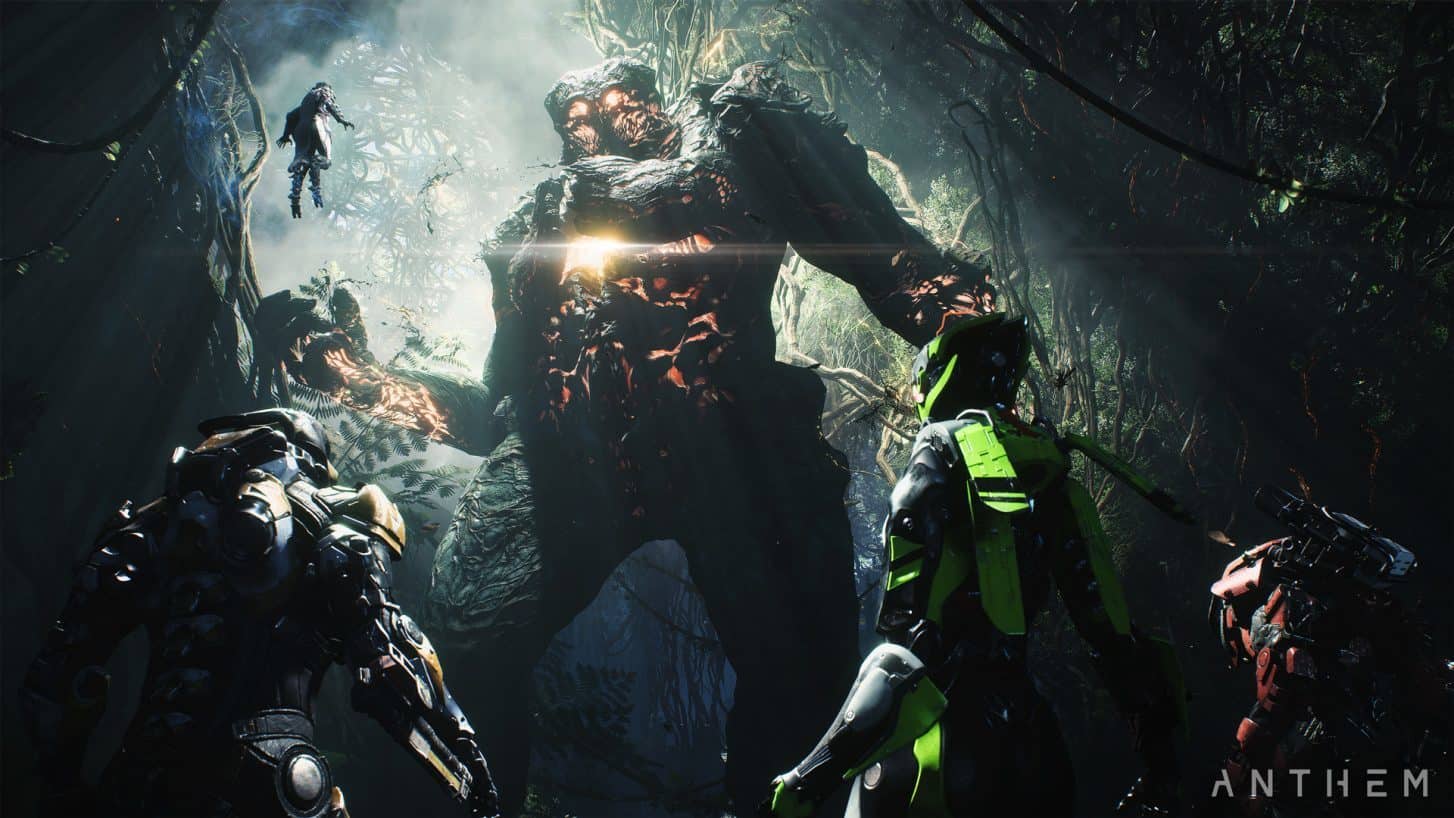 The game’s narrative suffers from poorly implemented design decisions so much that it basically shouldn’t exist. At this point the game’s story has turned into a chore that needs to be done before you can continue playing.

The basic gameplay loop of Anthem is mission > return back to the hub > slowly walk through town to find NPC > dialogue > slowly walk back through town > mission. Even if you have multiple missions ready to go you can’t do them one after another, instead you have to return back to the town first. It’s insane and it stops any gameplay flow dead in its tracks. This creates huge pacing issues and so much downtime that I never felt like I was progressing. I felt disconnected from the world and the game.

There’s also an element of Anthem known as the Forge. Here you can check out your loot (armour, weapons, spells, etc), equip gear, craft new gear, scrap old gear, and deck out your Javelin with cosmetics you can earn or purchase. The Forge becomes a bit of a grind too, although it’s not nearly as problematic as other areas. The main issue here is that loot found or crafted in the game is the same as your old loot, it just has a different colour (rarity) or different level. It’s not fun to equip new weapons or armours, nor is it fun to acquire them in the first place. It’s just yet another task that has to be undertaken before you can continue playing the game.

“One of the worst ways you can experience Anthem is playing the game solo. If you are intending to purchase this game but you don’t have friends to play alongside you, turn back now.”

One of the worst ways you can experience Anthem is playing the game solo. If you are intending to purchase this game but you don’t have friends to play alongside you, turn back now.

I had a particularly bad time with Anthem for reasons that admittedly won’t effect the majority of players. My PC is a few years old now and is slower than your average rig. This meant that I loaded into missions slower than others and my randomly assigned teammates were already in and running amok before I had even joined. Once I had loaded in I had missed the opening moments of the mission, missing important bits of dialogue, and was too far from my team that the game then had to enter a new loading screen so that it could teleport me to my squad (losing me even more game time). My colleague Luke who played the game on his Xbox One X had a considerably different and more positive experience in this regard.

Unfortunately playing the game with friends wasn’t all that much better. For a game that is heavily intended to be played with a squad of four and has different classes with different abilities, Anthem is shockingly devoid of strategy. Don’t worry if your entire squad is all made up of the same Javelin, there’s absolutely no need to balance your friend’s weaknesses with your strengths, nor is there a need to work together and synergise. Nope, just shoot, that’ll work. Adding to this problem is a lack of communication tools that prevents solo players from effectively engaging with their team and sharing what little strategy is needed.

Anthem can also suffer from long loading screens. This is actually an issue already addressed in a day one patch for the game that I’ll admit, does help reduce the problem. Unfortunately this doesn’t stop loading screens from highlighting what is already an issue. Anthem has so much downtime, so much busywork, and respects your time so little that I ended up having another game ready to go to keep my mind active during these moments of nothingness.

My colleague Luke has managed to play the game for longer and has well and truly reached Anthem’s endgame content. Continue reading for a different perspective and some thoughts on the genuinely important Anthem endgame:

“I certainly enjoyed my time with Anthem a lot more than Elliot did. There are definitely some pacing issues and an odd battle between the story-based Bioware we love and the looter-shooter Anthem is trying to be. That being said, the issues for me are worth dealing with, as the core gameplay loop is something I’m still enjoying now that I’m into endgame content. There are three strongholds available – the Tyrant Mine that’s there early on, a Scar stronghold, and one that’s essentially the last mission over again, complete with final boss battle. I want some more variety with these, as when they are ticking all the boxes they are incredibly fun and challenging adventures overall, but farming them for loot over and over is a lot less enticing than say, the varied Strikes seen in Destiny 2.”

“Endgame is meant to be about getting Masterwork gear to make you strong enough to tackle the Grandmaster difficulties once you hit level 30, but loot drops are affixed with random buffs and perks that aren’t always clear in what the benefit is, and the RNG Gods need to smile upon you if you are going to get better gear on a consistent basis. Some more clarity on what is considered “good” or “bad” with these inscriptions would be helpful, and hopefully not too difficult to add later. It basically means that once you’re done with the campaign, you finish off the available quests and start repeating the missions with your squad-mates, getting stronger and crossing your fingers for a good upgrade. There is promise of new content in coming months that will expand on what’s available, but as of right now it’s not a lot of variety. Is the endgame in Anthem worth it right now? That will largely depend on your enjoyment of the gameplay itself, along with how much fun you have playing the game with your friends. As it stands, there are glimpses of what the game wants to be that are exciting, but still a lot of grinding and uncertainty as to when Anthem will truly become the game it wants to be. I’m personally keen to stay the course and go on that journey with Bioware and the fanbase, but you might not have the same level of patience.”

BioWare may still be able to craft a game with high production values that include a beautiful world, good voice acting and tight gameplay mechanics. Although they certainly feel like they have lost any of the heart or soul that was found in previous titles.

Anthem’s issues are varied and numerous and they aren’t things that can be easily remedied. They are troubling design choices that permeate right down to the core of the game. Throughout this review I have discussed many of these issues in depth. Although the truth is I had so many more complaints I wanted to highlight but didn’t because they seemed like nitpicks in comparison. The reality of Anthem is that it should have learned from the mistakes of the games through which it took inspiration. Although rather than advancing the genre it feels like a regression. If you can get a group of friends together there is still surface level fun to be had. Although the game needs to go through some serious changes over its lifespan if it wants to remain within the public eye.