Crackdown 3 Review – A fun time, but the cracks are showing

I’m sure you’ve heard this by now, but Crackdown 3 has had a pretty troubled development cycle over the last few years. Initially revealed almost five years ago, there were times when the game almost seemed like it might not happen at all, but a clever campaign with the charismatic Terry Crews getting involved gave it a bit more life, and finally, it’s here.

Conversations about Crackdown 3 have largely been about its new use of technology, specifically cloud-based tech that allows for fully destructible environments in its multiplayer mode, Wrecking Zone. But having a cool new idea still needs a solid foundation of gameplay beneath it to truly make it worth your time, and Crackdown 3 never truly feels like an essential experience. It’s fun, sure, but it just kind of exists, and would have done much better had it launched about three years ago as was originally intended.

An open world to explore, jump around in and bring down a corrupt government as a super soldier, the formula here isn’t one that is particularly unique. Brief static cut-scenes with voice-overs outline the corruption, and it’s your job to stop it, by blowing up key locations, taking down enemies, taking over radio towers and freeing prisoners. The trouble is that the tasks feel particularly by-the-numbers, and while objectives may be different they essentially boil down to “clear the area of enemies and maybe hack something”.

The constant progression of your super soldier is what is meant to keep you hooked, and I will say that Crackdown 3 does a good job of making progression feel exciting and constant. Your five core skill-sets include Agility, Shooting, Strength, Explosives, and Driving. Doing anything, whether it’s killing enemies or just travelling through the environment, causes small coloured orbs to fly towards you, slowly being absorbed and leveling up each skill. 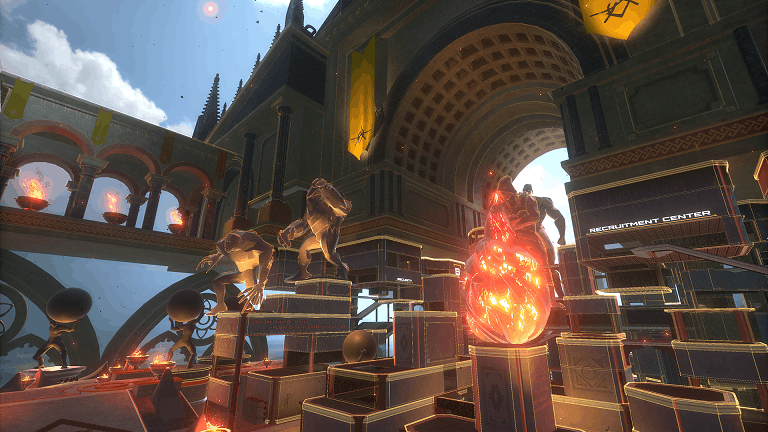 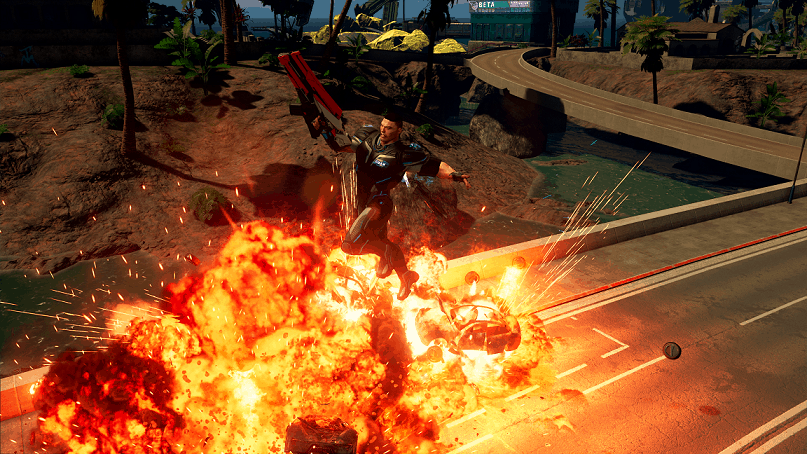 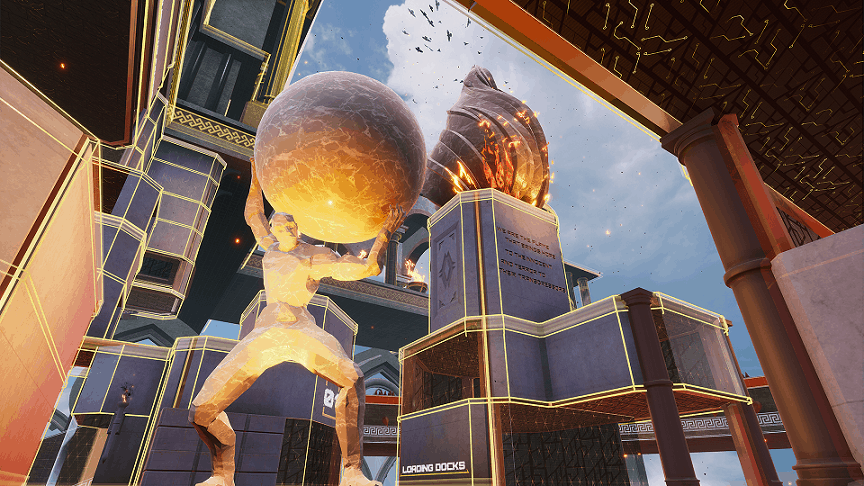 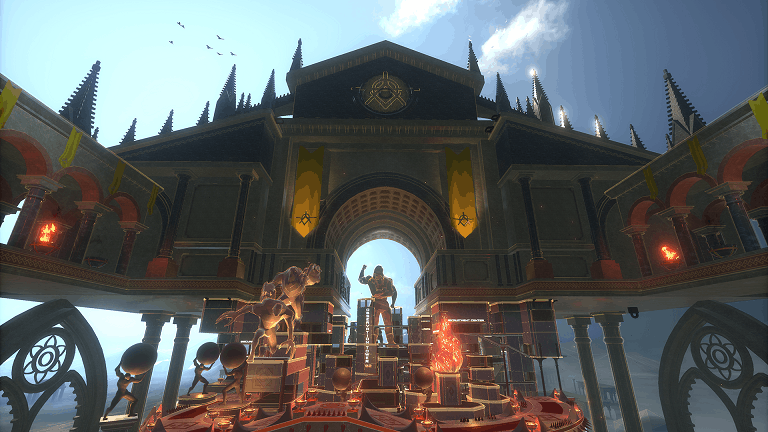 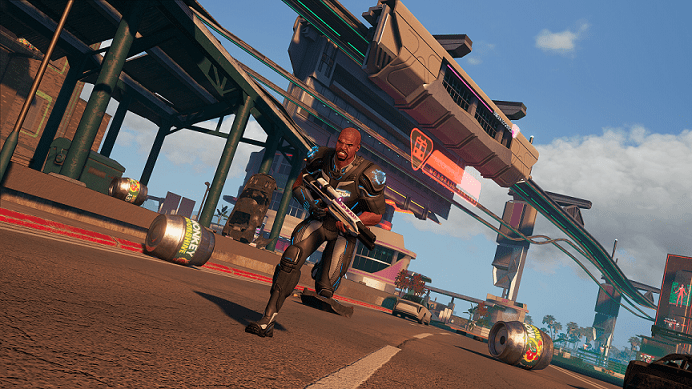 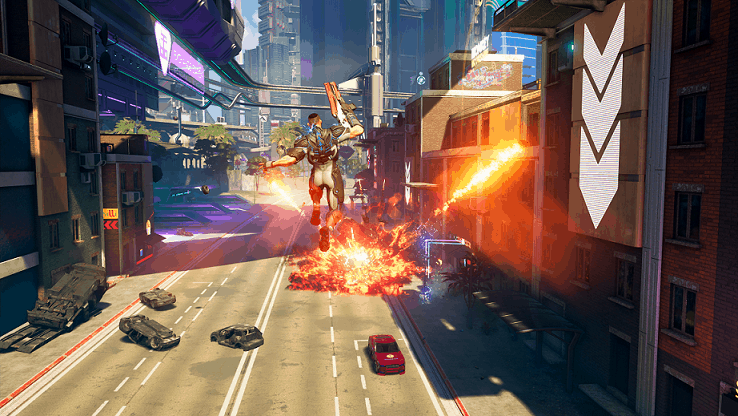 This is punctuated further by the Agility Orbs and Hidden Orbs that are scattered all over the city in slightly harder-to-reach places, that are still just as fun to collect now as they were when the original Crackdown launched way back in 2007. But the tantalising orbs just aren’t enough to break the monotony of repetitive missions, even though causing havoc with explosions and high kill counts is still fun in a cathartic sort of way.

What always made Crackdown so enjoyable was the free-flowing traversal, that allowed for very large leaps, allowing you to move from building-to-building with ease. This is still present, but where they’ve nailed the super jumping, they’ve fumbled on the climbing and ledge-grabbing. It feels inconsistent and sometimes quite unclear which parts of the city you can actually cling onto. This causes some serious frustration when falling during a firefight, or engaging in one of the many platforming “puzzles” like the several radio towers.

“…causing havoc with explosions and high kill counts is still fun in a cathartic sort of way.”

There is a simplicity to unlocking the many supply points around the city, allowing you to quickly switch weapons or vehicles on the fly, and each new weapon is added to your supply as soon as you pick it up for the first time, so the collection grows fast. The less said about the driving the better though; it’s janky and unresponsive at best, making me avoid any driving related side-missions almost entirely. I much preferred travelling on foot, searching for those sweet orbs along the way.

Shooting itself is anchored by a left trigger “lock-on” that sticks your reticule to the nearest foe; at least it’s supposed to. Sometimes it’ll lock on to a fuel tank in the background, or a different enemy entirely. While none of them have a particularly large amount of health, this became problematic in later stages of rooms with lots of enemies or boss types, as I often shot rockets at a weakling instead of my intended target.

Perhaps most criminal with Crackdown 3 is the lack of personality, which is a real shame given the opportunity they had with Terry Crews being on board later in the project. His voice is great to hear when taking over supply towers, but your agent is voiceless otherwise, the only ongoing dialogue taking place between the bickering of your superiors over intercom. Lines get repeated ad nauseum, and it’s especially annoying hearing comments about how orbs work or how to avoid certain  regular obstacles when I’m several hours into the game.

Even with all the gripes I had with the core functionality of Crackdown 3, I still enjoyed blasting through its 8ish hour campaign, quickly smashing through objectives and taking over the city. Co-op makes this even more fun, and tearing it up with a mate made sure that the frustrating moments were never too frustrating, as we tag-teamed a serving of explosive justice into large mobs and watched the orbs flying all over the screen.

Wrecking Zone is the multiplayer component with the aforementioned technology that uses cloud data to be able to have completely destructible environments. It would have been cool to see this in the campaign, but it odes provide something that other games have only done before in a more limited scope. In this 5v5 PVP mode, you collect orbs to power-up a super attack and the rest is pretty elementary.

The decision to not allow you to party up with friends in this mode is puzzling, although they have said this will be fixed in a future patch. Being paired with random players isn’t my preferred method in team-based multiplayer, but I digress.

While it works as a sort of tech demo for this destructive technology (which is fun initially for sure, slamming through walls and watching the debris fly), the rest of Wrecking Zone is so archaic that it only warrants a brief look before it gets old. The multiplayer only comes with two modes, one a “kill confirmed” style death-match and another one that involves capturing and protecting zones, which feels counter-intuitive to the whole bouncing around the map thing that Crackdown 3 does so well.

The match-making is old school to the point of you having to return to the main menu and enter into a game mode of choice after every single match, the lock-on functionality just doesn’t work in a competitive multiplayer space and no matter how cool or exciting destroying the neon-soaked environment is, the foundations just aren’t there to keep anybody interested long-term.

I enjoyed my time playing Crackdown 3, but at the end of the day it doesn’t do anything memorable or exceedingly special that makes it stand out from the crowd. We’re in a world with strong narrative adventures, stunning open worlds full of activities and touching, unique character moments that stick with us. Crackdown 3 would have done better if it had launched years ago, as intended. Even with a technology advancing multiplayer mode, even that ultimately falls flat, and there isn’t enough worthwhile content here considering how long we’ve had to wait.