Yoshi may not have always been the go-to platforming icon for Nintendo, but his adventures have been becoming more commonplace in recent years, which I’m personally a big fan of considering he’s my favourite from Nintendo’s long list of memorable characters. While his world was previously made of wool in Yoshi’s Woolly World on the Wii U (and eventually the 3DS), Yoshi’s Crafted World’s aesthetic is focused on crafting, with levels looking like the result of an imaginative mind of a child cutting out clever creations and placing them on a kitchen table.

It’s a charming style that makes the experience feel unique when compared with other platformers from Nintendo, with their trademark attention to detail and incredibly high quality production design making colour and cuteness fly off the screen. It’s not the most challenging experience, but what it lacks in difficulty it more than makes up for with collectables and memorable crafty moments.

The crafted world itself is a standout, with paper-crafted creatures, cut-out clouds and trees along with pathways made from cardboard. Everything has this gorgeous home-made quality that separates Yoshi’s Crafted World and makes it stand-out, with crisp visuals throughout. It makes me wish I was creative enough as a child to make platforming levels of my own, as they do genuinely feel like they could be made with materials at an arts & crafts store.

What makes the game such a success though is that the visuals are not just a gimmick, but are actually built into the gameplay and have a direct impact on your progression in each stage. Some key moments include finding pieces of a device (like a train or a bridge) so that it can be put back together for use. Adding to this, for the first time, Yoshi can throw eggs and interact with the foreground and background of each stage, which means enemies (and secrets) are littered around the place, causing you to be much more aware of your surroundings.

It’s still a side-scrolling platformer at its heart, but the ability to throw an egg at a shy-guy who is hiding behind a bush in the background or finding doors and pathways that can lead you off track to a hidden secret means that levels are begging to be explored, including some elements that literally flip the screen around 180 degrees to reveal targets for egg-throwing to get a bonus.

Yoshi’s Crafted World may start off simple as the ideas of the game are introduced, but it doesn’t take long for some of the trickier and more devilishly intricate levels to start really showing off. One level plays with silhouettes with a moving modesty screen limiting your view, while another has you maneuvering switches and platforms in a haunted mansion as you search for keys to find your way into the next room. Another safari stage feels like an on-rails shooter as you throw eggs at cut-outs of animals to achieve a high score. Each “world” theme does more than enough to add new gameplay elements and keep them escalating without overstaying their welcome, a testament to the variety in the design. 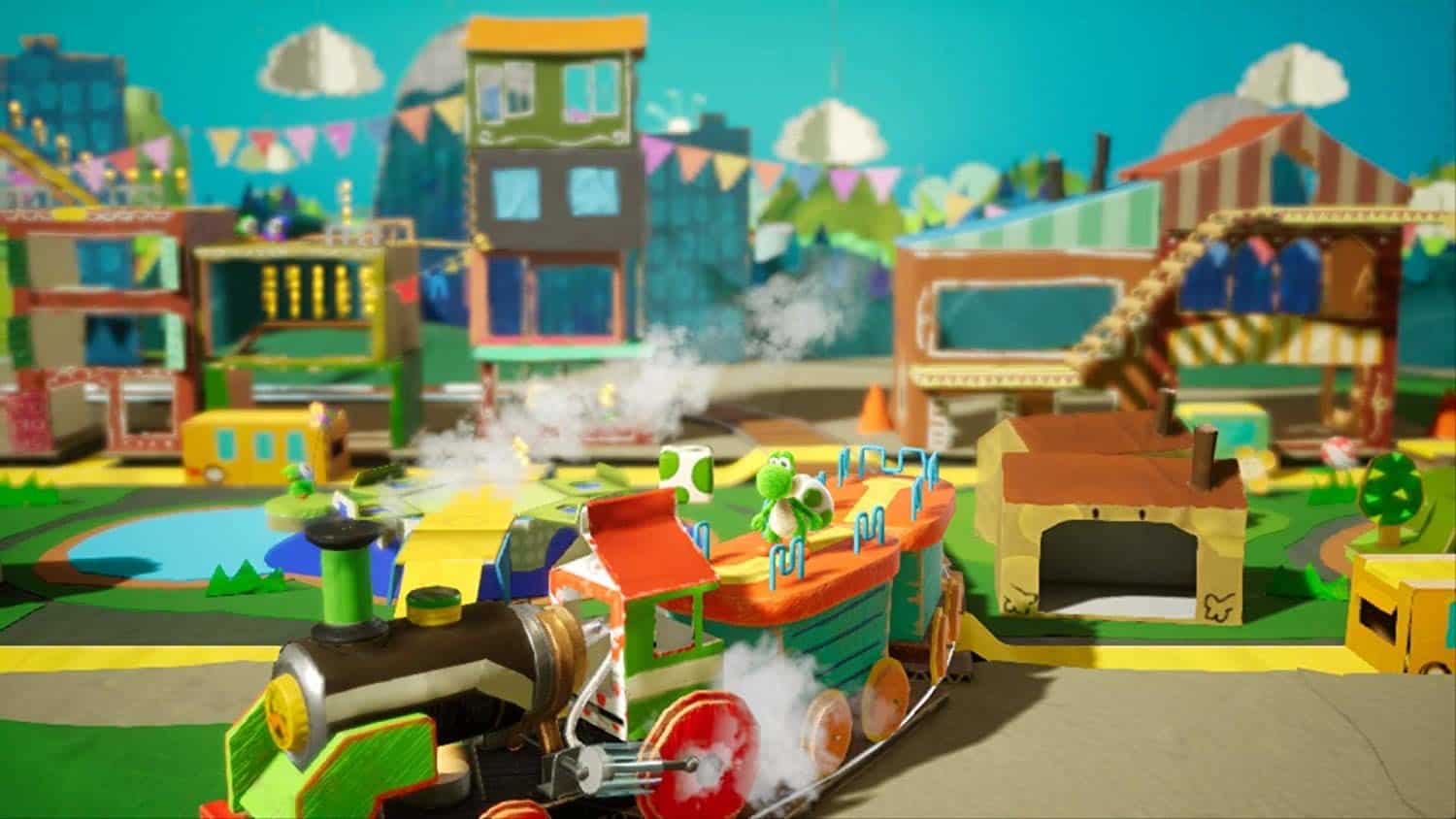 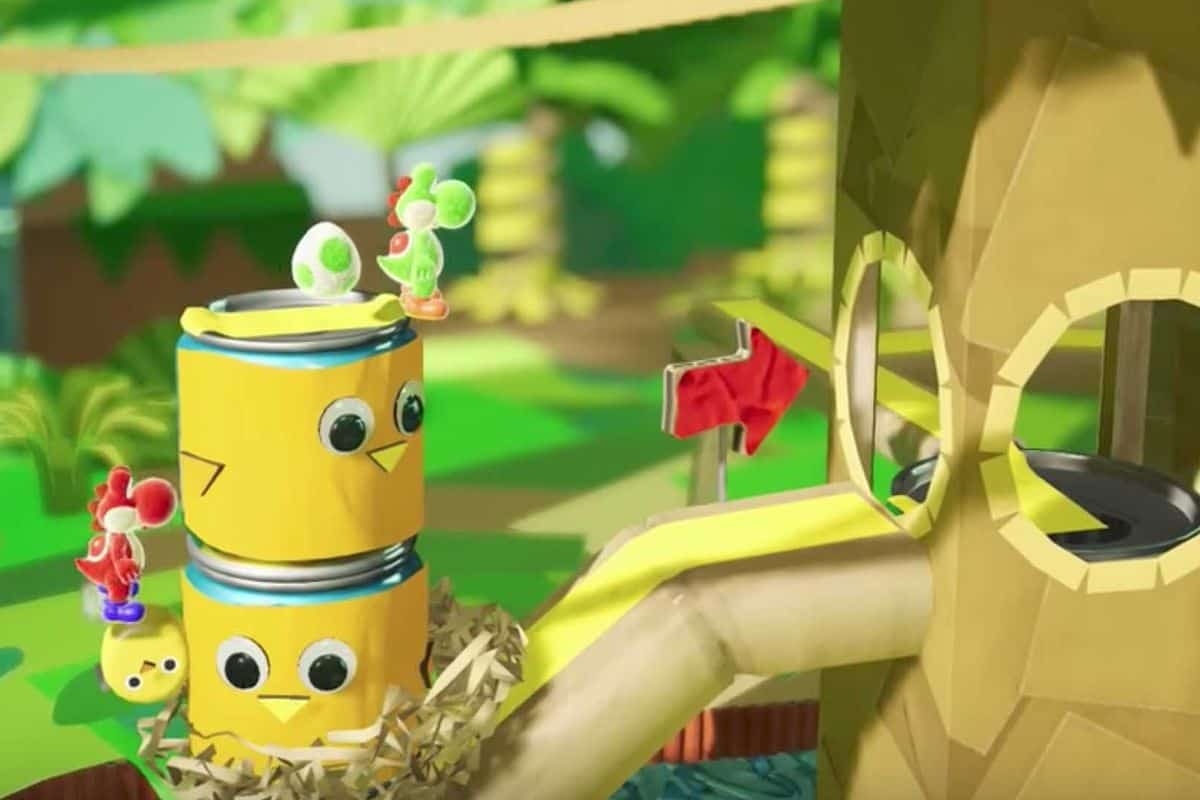 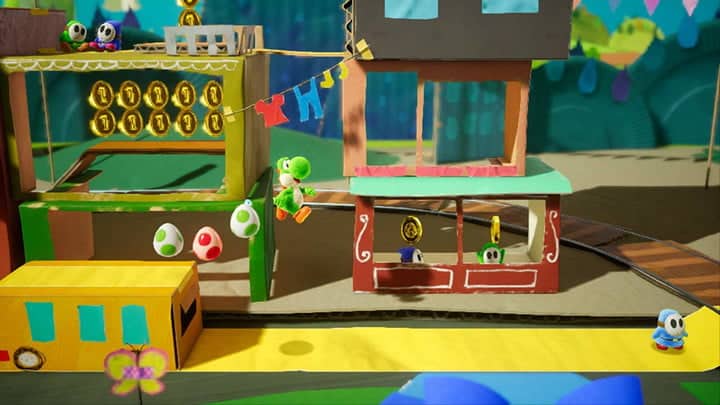 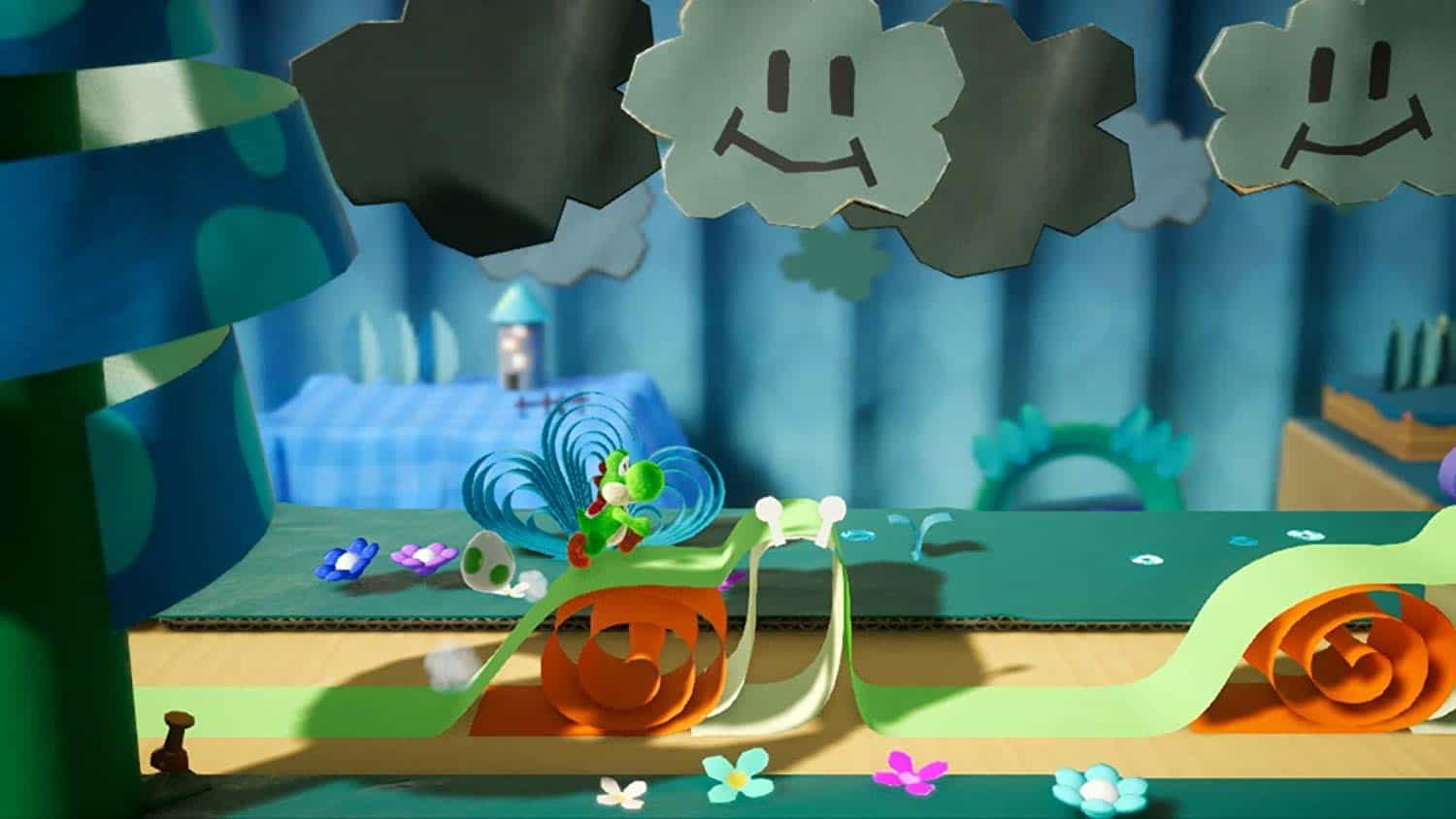 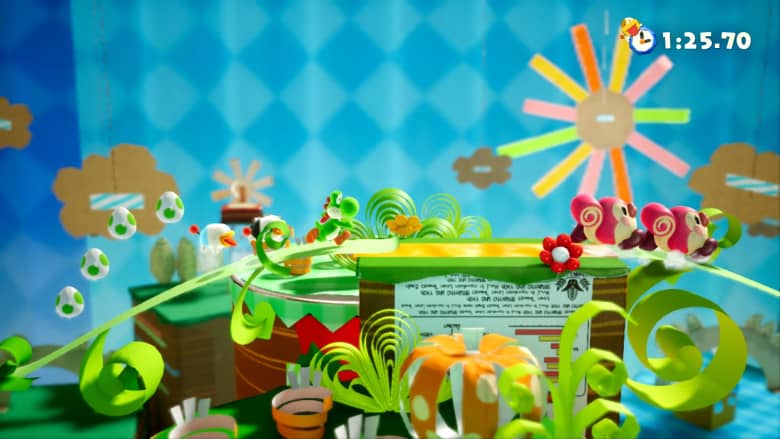 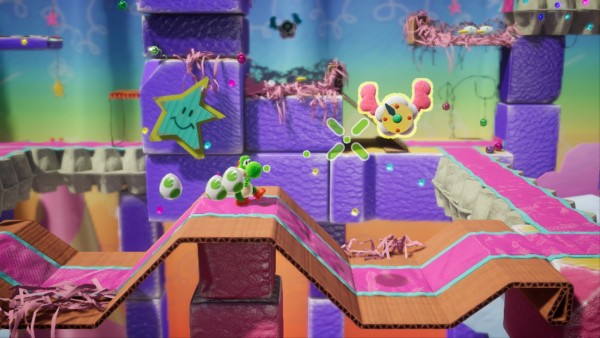 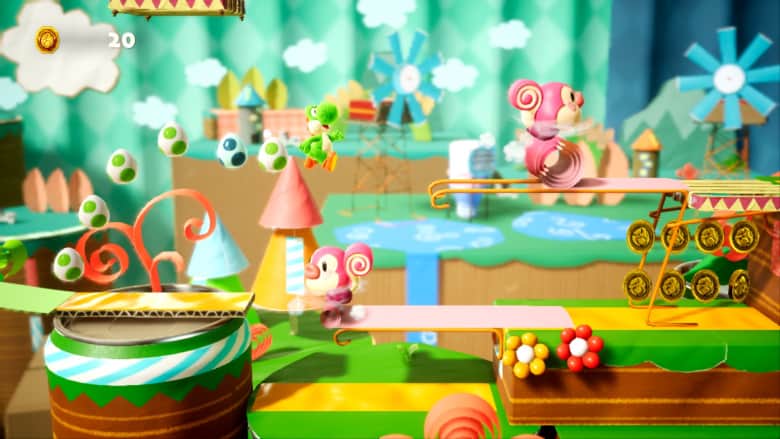 Reaching the end of a level isn’t especially challenging, but doing so after finding all the red coins, flowers and maintaining your full health certainly is. Collectables are hidden creatively in all sorts of places, some of them requiring you to complete mini-tasks within a level like hitting enemies with eggs before they run off screen. The stages that have moment involved also mean you can’t spend a lot of time thinking about where they might be hiding, meaning you have to have your wits about you. You’ll need flowers to unlock new stages, but only once did I need to go back and find more during my play-through, as there are normally enough that are easy to find to prevent gating your progress.

Poochy makes a satisfying return here as well, featuring in some specific levels as an invincible ride, but also with another unique mechanic where each level can be flipped back to front, with the mission being to find three Poochy pups and hit the finish line in a short time-frame. This doesn’t necessarily leave as much room for exploration or secrets, but it’s a clever way to see previously completed levels from a different perspective, and those pups are just so darn adorable.

Cooperative play is definitely enjoyable as well, and Yoshi’s Crafted World is definitely a fun game for novice players or younger members of the family. You can adjust to a more friendly difficulty settings which essentially allows you to hover indefinitely, which is forgiving and helpful for difficult stages. This means the game works incredibly well as a cosy title for those who don’t want to see a “game over” screen and are just here for the various collectables. That being said, with two Yoshi’s on screen and the eggs following behind you, it can get cluttered and confusing. It’s also far too easy to accidentally swallow the other player or end up jumping on their back unintentionally for a ride, which was funny the first time but very irritating the 100th. Costumes can be acquired to give yourself some extra armour as well, but this also adds to the visual clutter with multiple players, so I didn’t find them to be particularly helpful.

The visual aesthetic of a crafting table is exciting, creative and super cute, and the ideas of using the foreground and background for hidden secrets along with flipping levels in the opposite direction to find Poochy pups are welcome additions. The game is a little simple if you’re not looking to collect everything in a level, but that makes it appealing to casual and younger gamers while still providing extra incentive for more skilled players to achieve 100% completion. Yoshi’s Crafted World continues the trend of satisfying, collect-a-thon platformers that Nintendo truly excels at like nobody else.