With games like Dead by Daylight and the Resident Evil 2 remake using powerful graphics to bring us some heavy-duty scares, it’s always good to remember that it’s not all about  gore and misery. Yuppie Psycho takes a satirical approach instead, to create the first ever ‘corporate horror’ game.  It takes everything you hate about a souless job – endless hours, forced positivity, and clumsy management – and turns it into a supernatural horror story.

If you’ve played Japanese horror RPG Corpse Party or any similar horror titles, you’ll be familiar with this niche genre. These games are characterised by a pixel art style, puzzle solving, and the occasional running from monsters. Yuppie Psycho is a breath of fresh air for horror indies, largely due to its hilariously sardonic sense of humour.

“Yuppie Psycho is a breath of fresh air… largely due to its hilariously sardonic sense of humor.”

Yuppie Psycho follows Brian, a young man new to the workforce and ripe for exploitation by a huge corporation. Signing a mysterious contract that promises a superior paycheck,  he learns that his task is to ‘kill the witch’ that has turned the offices at Sintracorp into a nightmare.

Brian’s life quickly decends into utter madness as he must uncover the secrets of Sintracorp while surviving monsters, rabid workmates, and the murderous nature of corporate life itself. It’s an effective way of poking fun at the crazy things we can get used to when a workplace doesn’t seem quite right. And considering recent news about working practices within game studios, this message is well-timed.

Yuppie Psycho uses its strange premise for dark comedic effect, which was easily my favourite aspect of the game. Watching lifeless employees hurry past dead bodies on the floor as if it’s just business as usual never lost its charm, even by the end. The pure wackiness took some of the horror out of it at times, but I never stopped feeling that sense of creepy unease. It has its fair share of pixelated gore, but the art style is so minimalistic that it won’t leave much of an effect on more sensitive players.

I’ve never held a corporate job, but I did spend about a week in door-to-door sales. And as Brian is forced into a mandatory meeting where a manager literally sitting on his high horse yells for several minutes about work ethic… well, it brings back memories.

The game’s humor is its shining star, while the gameplay itself is your standard puzzle adventure affair. You’ll need to solve various tasks using the stuff you pick up around the office. Exploration is encouraged, as the precious items Brian needs to survive are hidden away in Sintra Corp’s 10 floors. Exploring is fun, and can be done at your own pace for the most part. Each area contains secrets to find in the form of helpful items and collectables, which will be vital to Brian’s survival. To save your game, you’ll need to photocopy your soul using one of Sintra Corp’s various printers… providing you’ve found enough ink and paper. 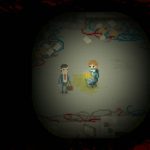 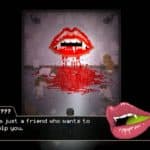 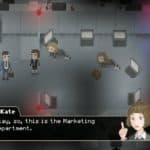 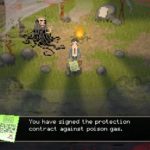 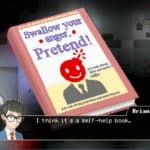 The creative use of common office supplies as items is great, but the complexity of puzzles didn’t increase very much as the game progressed. The good old ‘find thing, then use thing on obstacle’ puzzles are all well and good, but I felt like they only scratched the surface of what they could do with what they had. By the same token, I wish it stuck a little harder to the corporate horror angle. About mid-way through it became more like a typical anime-style horror tale, which was honestly a little jarring. I would have liked to see what a true ‘corporate horror’ witch might have looked like, but I ended up a tad disappointed with what I got. I thoroughly enjoyed the story despite this however, and I found the final few hours particularly chilling.

It’s a bit short and can be finished easily if you know what you’re doing, but if anything that makes it easier to replay for the future. There are multiple endings to get, both good and bad, and I was very pleased to discover that I hadn’t found everything in my first playthrough.  Looks like I have more corporate adventuring to do!

Yuppie Psycho won’t have you hiding behind your cushions in fright, it’s instead more of a fun Halloween ride with a sense of humor. It’s a neat little title that’s worth checking out for its weirdness alone. If you’re not already convinced, I’d recommend checking out some games made with the RPGMaker engine. They hit a lot of the same notes as this one, so if you like those, you’ll love Yuppie Psycho.