You wouldn’t think Samurai Shodown would be a thematic title for a game. It makes sense that developer SNK came up with the name in the early 90s: they dropped the W in “showdown”, for goshsakes. ‘How descriptive a title could it be?’, I naively thought before starting this review. What I came to realise is that this is not a game with superfluous bells and whistles. There are no forgettable gimmicks to pad out your time, to keep you away from the action. This is a game about a showdown between samurai. They didn’t drop the W, they chopped it off.

A reboot of sorts for the long-running series, Samurai Shodown (no subtitle) is a 1-on-1 fighting game set in a fantasy version of Japan in 1787. “Fantasy” as in there are supernatural elements to the story, but also it’s a bit of a fantasy for a blonde dude named Galford to be in feudal Japan with his pet husky.

The game uses a gorgeous cel-shaded art style, reminiscent of the more recent Street Fighter games, but much more understated. Staying true to the setting, all the textures look like Japanese ink paintings, down to the brush strokes conveying movement during battle. There isn’t even any English voice acting in the game, and you only get subtitles during the handful of cutscenes during Story Mode. It maintains a level of authenticity, but there’s also a sense that the game knows you’re not playing it for the story.

As a newcomer to the series, Shodown took a lot for me to get used to. I had to rely on the handy yet brief tutorial to get me used to the controls. Each character has three slash attacks (light, medium, heavy) and a kick attack mapped to the face buttons. Heavy slashes do the most damage but take the longest to perform, while quick slashes trade in power for speed. Kicks can break an enemy’s guard, but have very limited range. There’s also a heavy defensive aspect to combat. By simply moving backwards, characters automatically block oncoming attacks. Blocking at the exact moment of the enemy’s strike triggers a Just Defence, letting you counterattack.

But wait, there’s more. Each trigger button is a combination of two or more basic attacks. For example, by default on PS4, R1 functions the same as pressing the light and medium slash buttons at once, which lets you dodge. Each character has a Rage Gauge which fills up as they get hit; once per fight, the gauge can be spent to enter Rage Mode, giving you a strength boost. During Rage Mode you can unleash a Lightning Blade, a vicious attack where the screen turns red and you slash through your opponent in a split second. Unless they block it.

But hang on, there’s even more! Each character can use a flashy Super Special Move once per battle, which takes the form of a visually impressive combo. There’s also Weapon Flipping Attacks, which could knock the opponent’s weapon out of their hand. If you lose your weapon, you can go pick it up again, or you can fight unarmed. Your unarmed attacks are similar to your weapon attacks, but slightly different.

There is so much to keep track of at once. If you’re used to more accessible fighting games, you won’t receive a warm welcome. But if you’re looking for complexity, and if having the patience to learn and master the controls sounds like your jam, Samurai Shodown has plenty of depth. It’s nothing but deep end. Each battle is about calculating when to take big risks for big rewards. It was thrilling winning a fight with a sliver of health left, throwing out a final desperate Lightning Blade to shear off half the enemy’s health bar in one swing. And it was devastating when the same thing happened to me.

The game comes with 13 characters, but there are already plans for DLC characters post-launch. Each of them has a very distinct playstyle, the game does a very good job of making each of them unique. I played through the Story Mode – a gauntlet of 9-ish battles punctuated by cutscenes – with the series’ muscular protagonist Haohmaru, who hits hard and has several special moves, but I didn’t enjoy his limited range.

“If you’re looking for complexity, and if having the patience to learn and master the controls sounds like your jam, Samurai Shodown has plenty of depth. It’s nothing but deep end.”

I switched to angry teen Yashamaru Kurama, and loved how far his sword reached, as well as his ability to double jump, but personally found it difficult to perform combos with him.

The slender blue-haired Ukyo endearingly coughs during his idle animation, and blocks attacks extremely quickly. He has special moves that involve throwing an apple in the air and slicing it to bits with a whirlwind of slashes. It’s the ‘if you get hit, it’s your own fault’ game, but with katanas.

My personal favourite character is Darli Dagger, a pirate-slash-carpenter with an enormous saw. Every time she lands a hit, she pulls the saw back to deal extra little hits with the serrated blade. Playing as her, I would often pull off lengthy combos by accident. 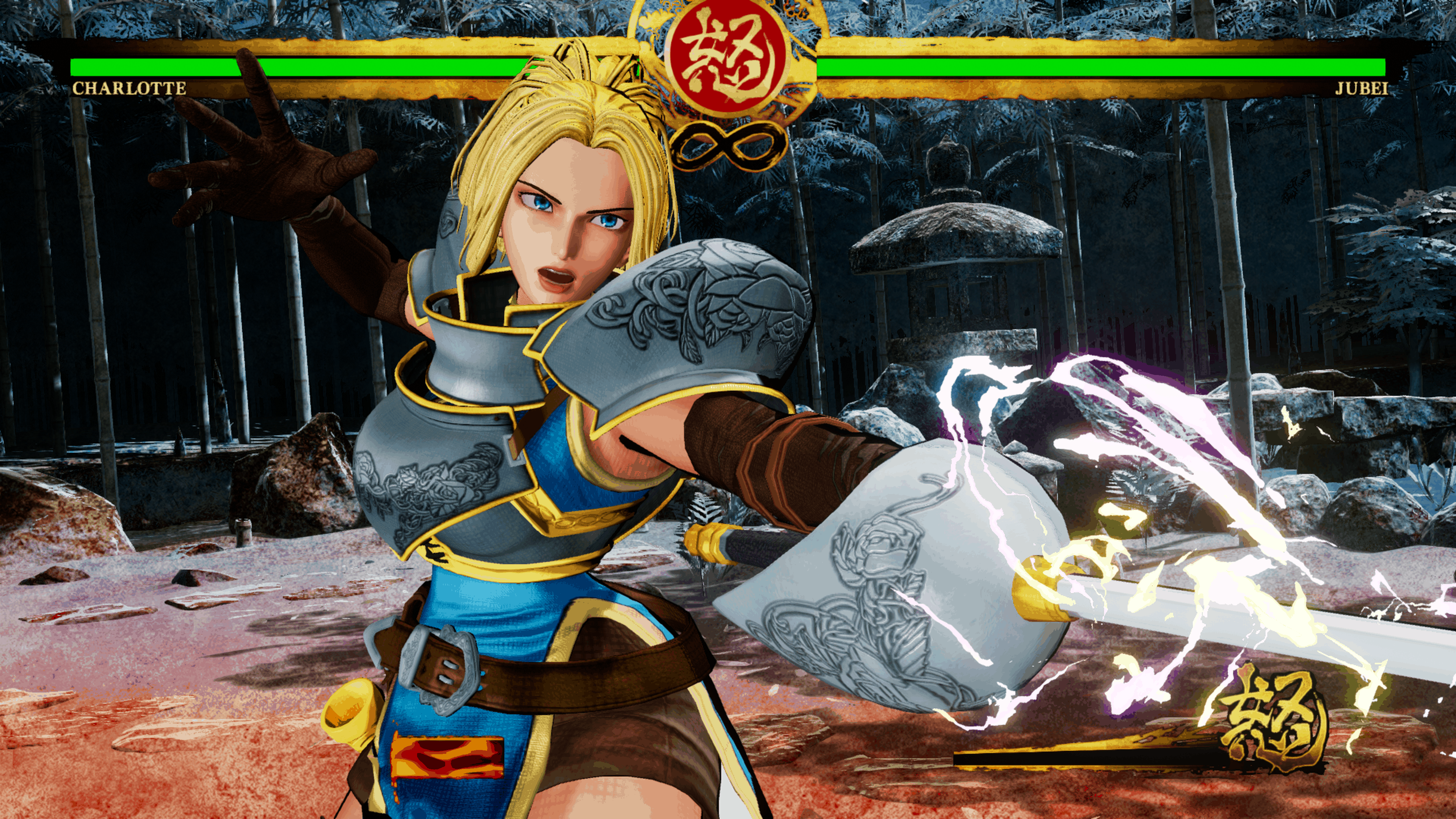 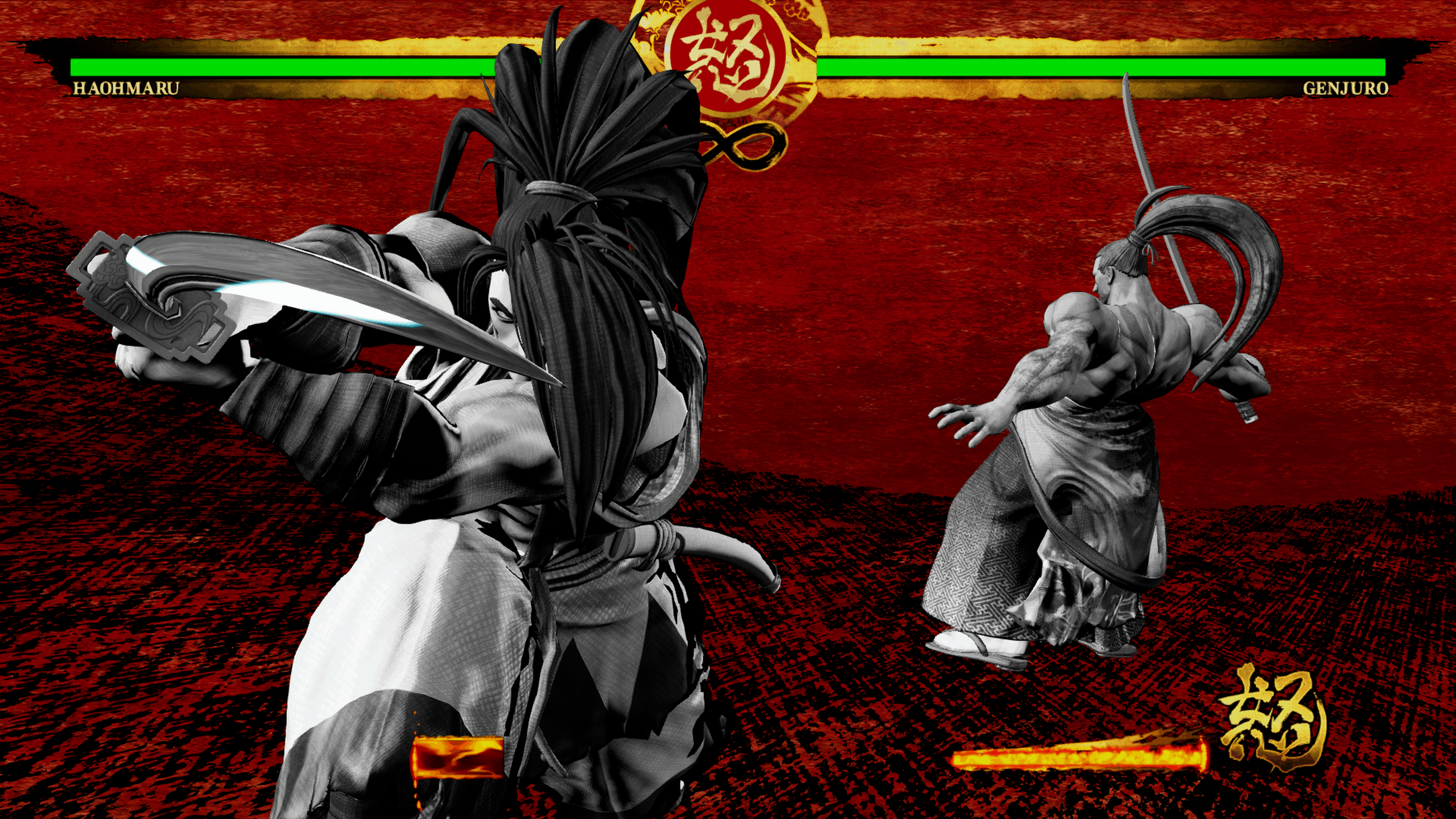 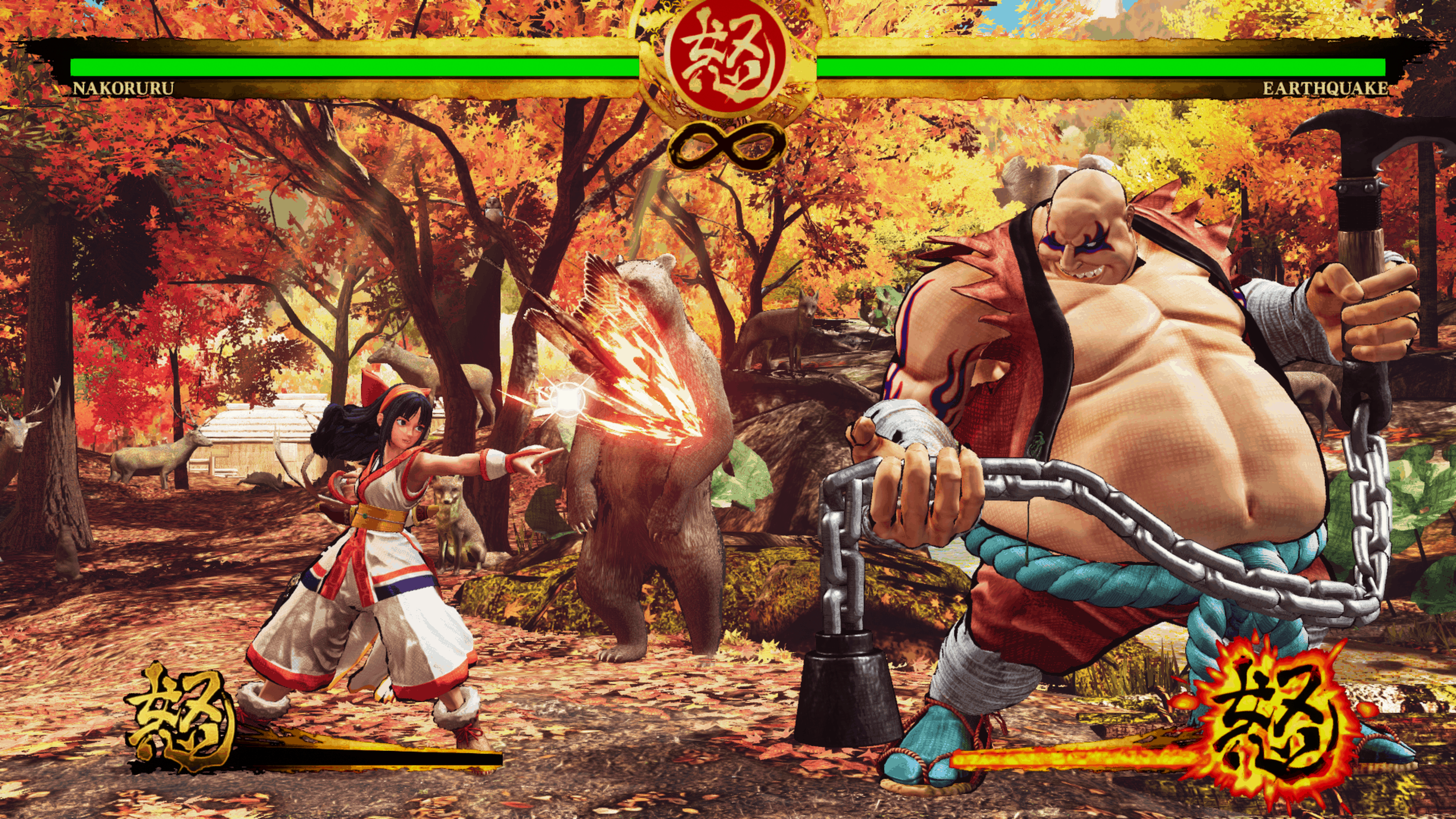 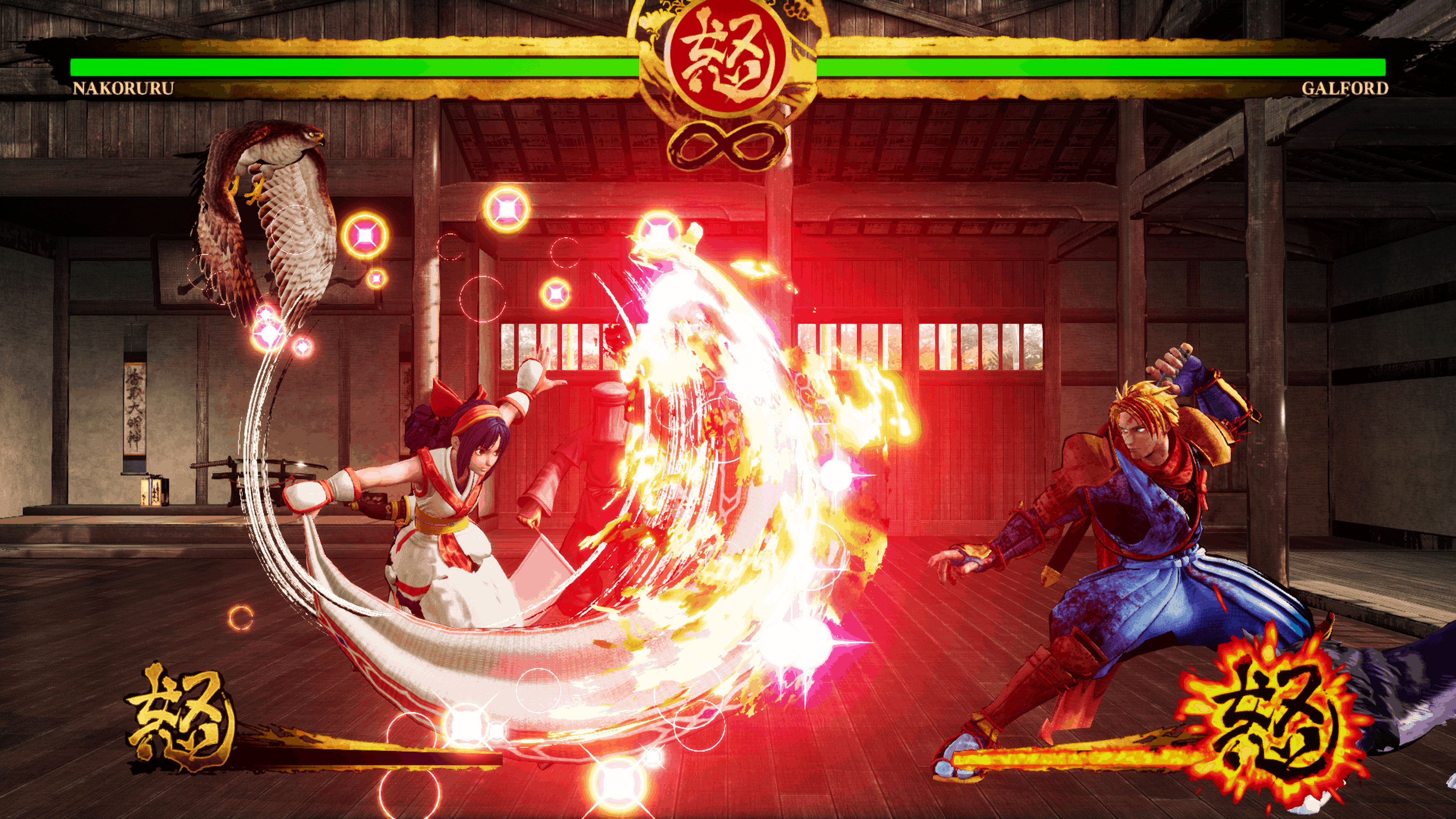 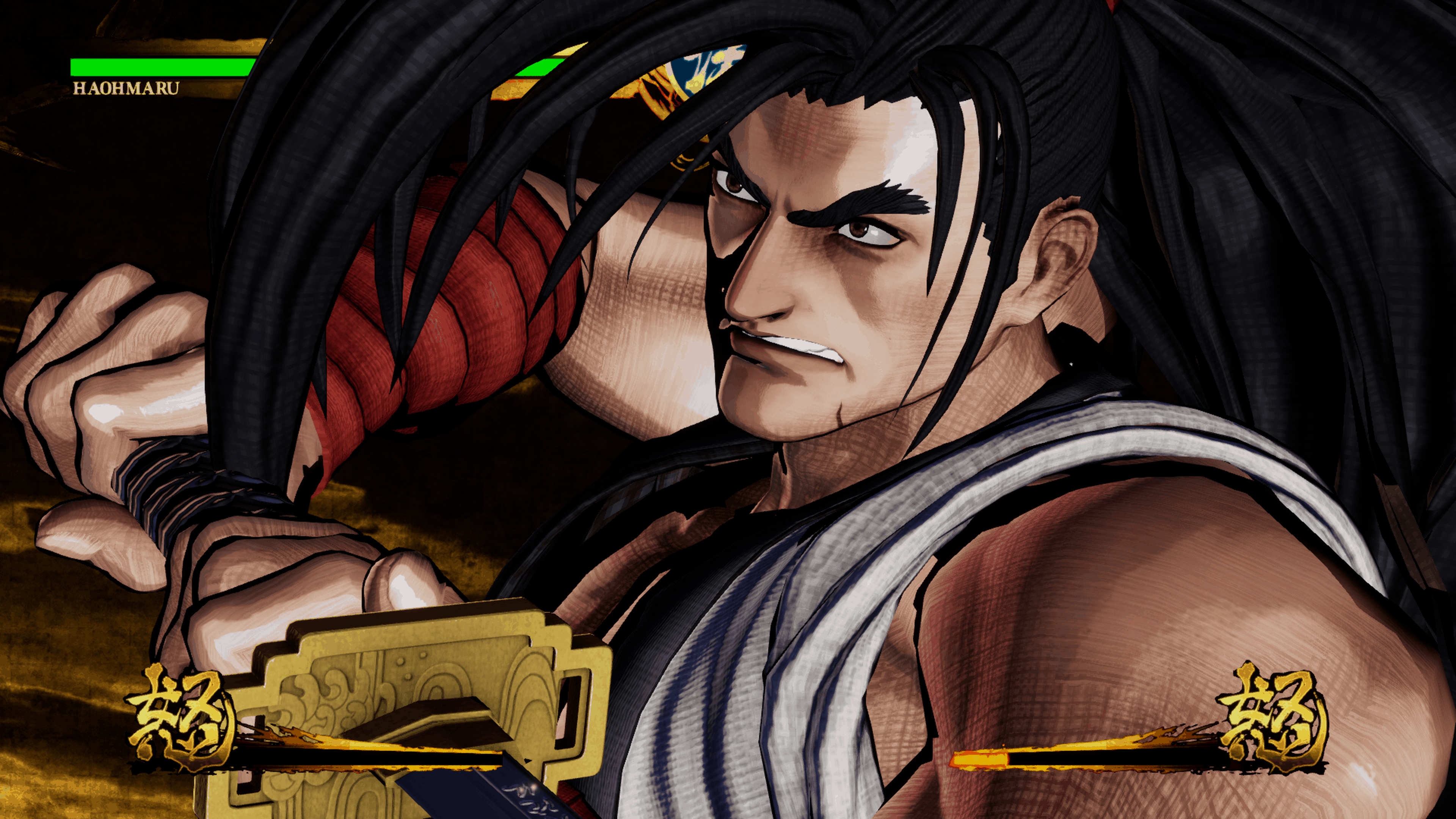 As colourful and complex as the characters are, there’s not a lot of offline content for them to play with. The 4 or 5 cutscenes within Story Mode are gorgeous, and the final boss is cleverly designed, but unless you care about the lore of the series, there isn’t much reason to go through it once with each character just to unlock their unique ending. Considering there are other recent fighting games with rich, cinematic story modes, this is disappointing by comparison. Similarly, I that found the couch co-op Versus Mode wasn’t fun with the measured pace of the combat. I probably won’t be pulling Samurai Shodown out during my next group hang.

But Samurai Shodown’s bustling online content easily makes up for that, and is clearly the game’s priority. With Live From PlayStation , I could watch feeds and live broadcasts of other players’ fights, including a pre-release tournament taking place during the lead-up to the game’s launch. Dojo Mode, which lets you fight against a ghost AI based on your playstyle, was not available at the time of review.

You can create a room with up to 10 people to play a Casual Match, or you can fight for your global ranking in a Ranked Match. I tried it once, immediately got thrashed by a player from Hong Kong, put my controller down, and sighed. I don’t think Samurai Shodown is a game for me, but I still think it’s a great game.

For a series that hasn’t had a proper release since 2008, Samurai Shodown comes swinging out the gate with confidence, style, and a plan for the future. The art style isn’t trying to be flashy, the single-player content isn’t trying to be memorable, and the mechanics aren’t trying to hold your hand. Not everyone has the time, ability or interest needed to be skilled at this game. However, if this is your cup of tea, and if the online community keeps up, the foundation is there for Samurai Shodown to be popular for a long time.