If imitation is the sincerest form of flattery, then Warhammer: Chaosbane is giving Diablo quite the ego boost. Set in the Warhammer universe (the same one where you also kill giant rats and have gigantic battlefields of warfare, if you’re trying to keep up), Chaosbane is an isometric action RPG for you and your friends to hack, slash and cast spells while upgrading your gear and abilities. A Diablo clone that brings nothing particularly new to the table might not sound so appealing, but there is some fun to be had at least.

Choosing from one of four heroes and jumping into the world to smash through hundreds and hundreds of enemies at a blistering pace while looting new bits and pieces along the way, the conventions of this genre are leaned into heavily and without remorse. The story is very “Warhammer” – that is to say I didn’t really understand what was going on most of the time. Some of the voice acting was laughably bad and characters standing around talking back and forth to each other without a cut-scene to break it up isn’t my favourite form of storytelling, but I’m told from a Warhammer fan that it stays true to the universe and is enjoyable enough.

Each act of the game has a distinct setting with different enemy types, but they changes to each area are mostly cosmetic, with maps and monsters taking on the same tactics and formations, albeit with a slightly different look. I know that ultimately they’re all just fodder to mow through and get the next piece of high-end gear, but the lack of variety stood out after several hours of play. Mission structure is similarly lacking; kill this dude, collect this thing, find this exit… it’s all very samey.

That’s not to say that Warhammer: Chaosbane isn’t fun to play. In fact, for the first couple of acts I enjoyed the co-op play with my mates, mashing abilities like their cooldown timers were going out of style, triggering larger scale “Bloodlust” attacks and chipping away at the various skill trees. There’s something quite cathartic about it, to the point where my brain was going into autopilot. I imagine if this was the first time I’d played a game of this genre before my experience would feel a bit less comfortably numb, but it does go through the motions like the warmth of a favourite childhood blanket. 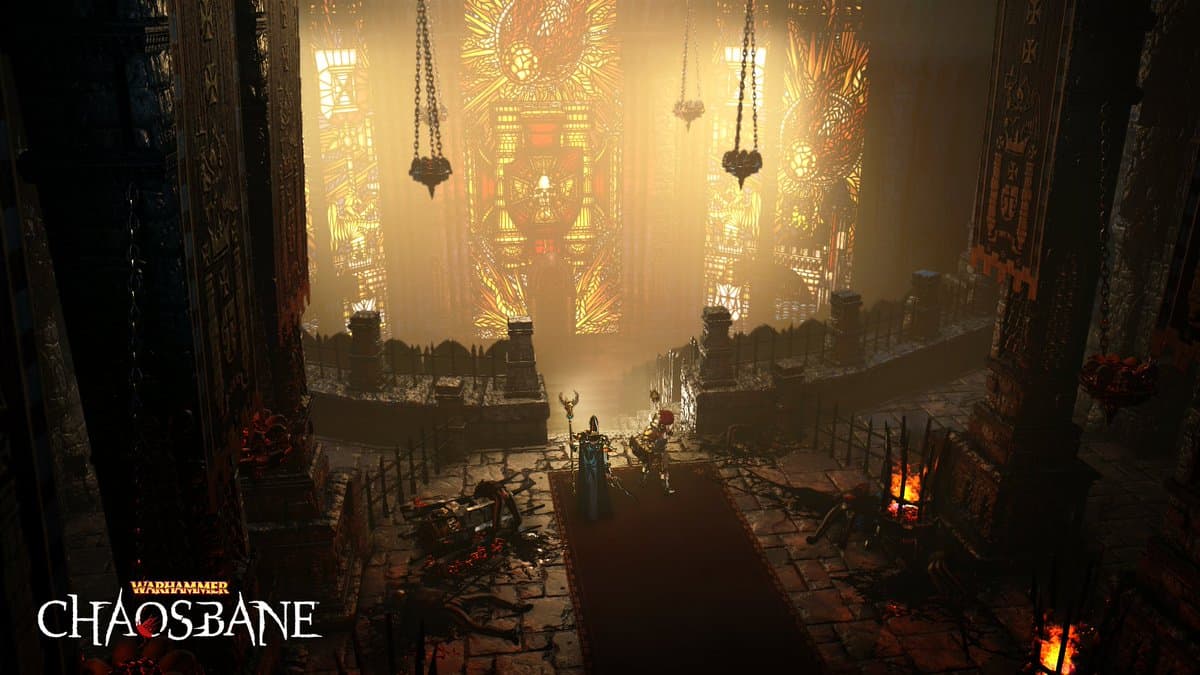 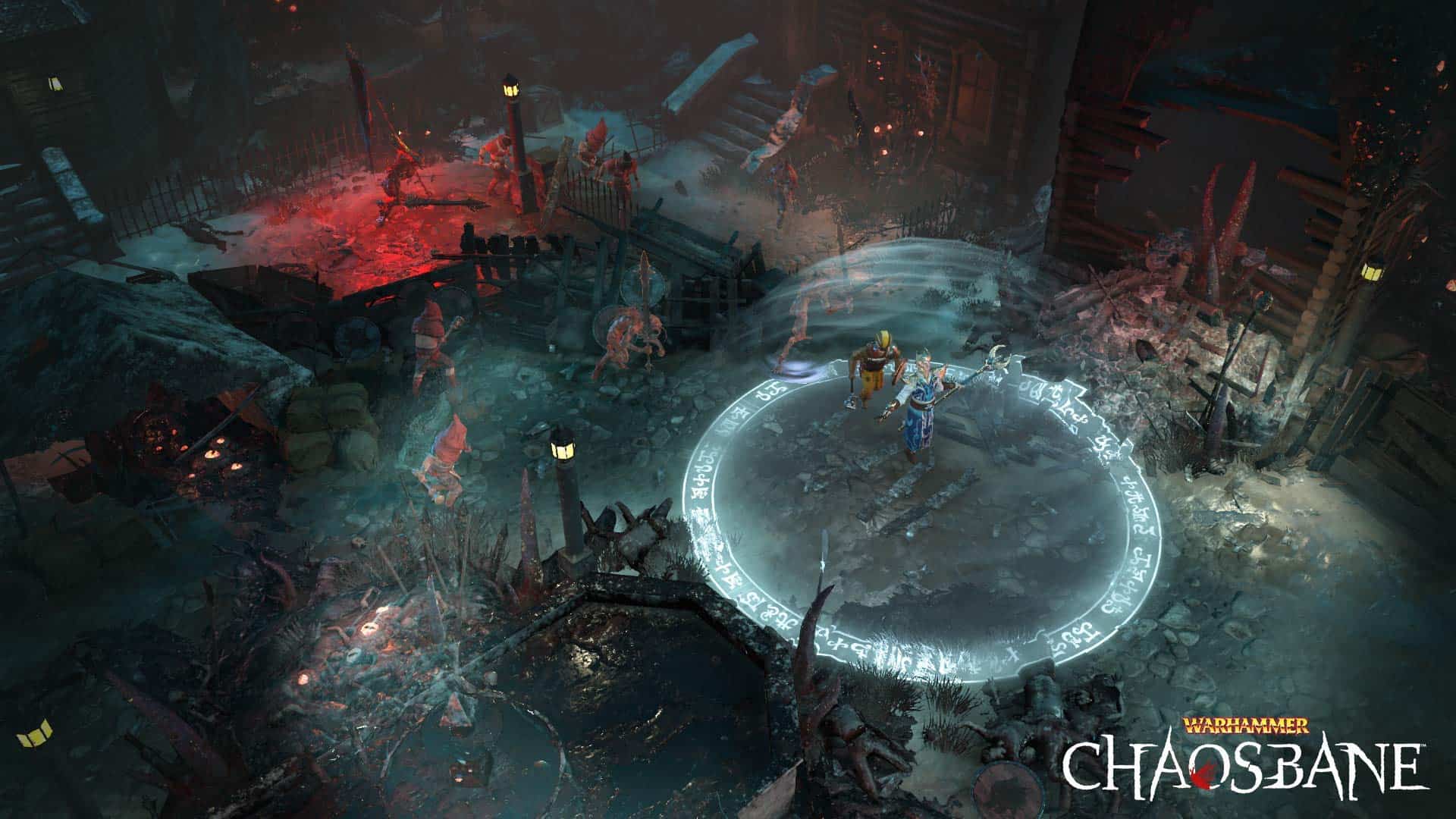 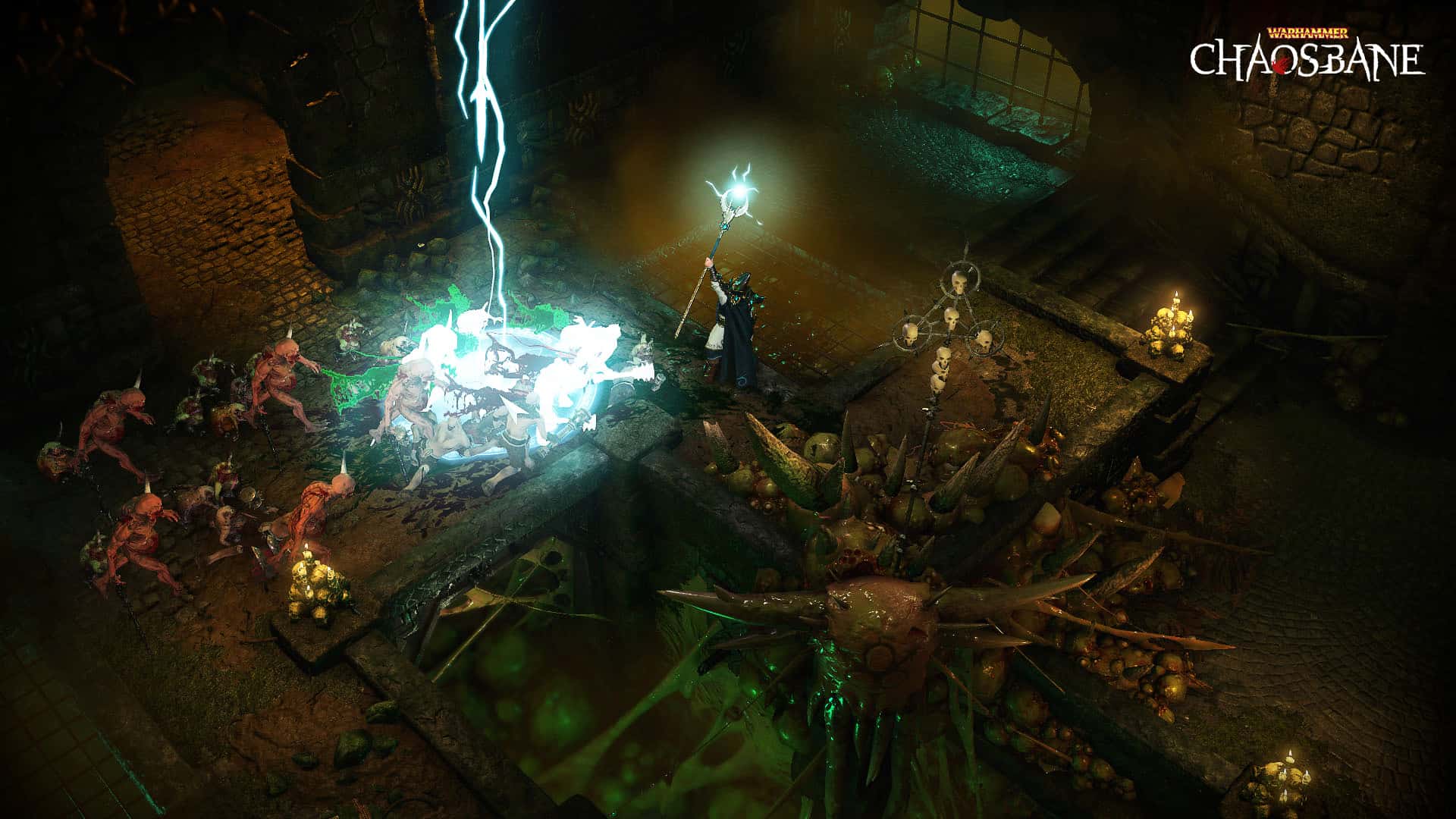 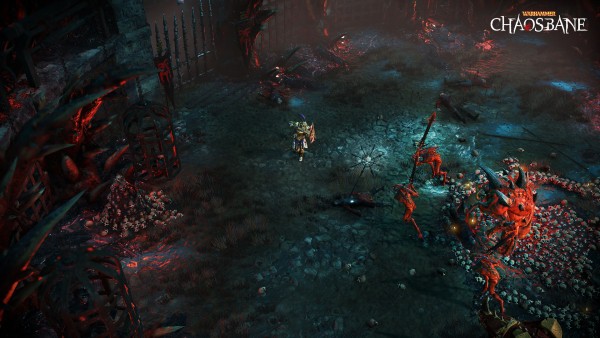 Where things are so disappointing is that the core foundations of the genre that are so enjoyable are here. My dwarf character can even change his beard style and tattoos instead of traditional armour. Brilliant! But to rest so heavily on the laurels of other action RPG’s of this style means that there are missed opportunities everywhere to make Chaosbane more than a clone. The loot that you collect is mostly just looking for the slightly higher percentage boost in attack and defense, with many of the loot drops looking cosmetically similar.

The skills are also lacking; while some of the upgrades did make an impact initially, they’re mostly a mix of close range and long range attacks with very similar pros and cons, and once you’ve got the ones you like there’s no real need to bother investing and changing to the others available. There’s also the ability to give away items to earn reputation, but this doesn’t feel useful other than giving you space in your inventory for more of the same loot.

Then, there are some bugs that really hampered my experience on Xbox One. Playing entirely through in co-op, there were no tutorials or screens to explain anything at all, so I didn’t even notice a whole skill tree until the end of the first act. When I gave single player a shot (after putting several hours into multiplayer), all of a sudden it was tutorial city. Would have been nice to know. It was also disappointing that increasing the difficulty setting to make things more challenging really just made enemies more spongey.

Also there was one mission where the enemy we had to kill just didn’t spawn. After retrying around four times, we realised that we had to load in and complete it as a single player instead just to get through. These aren’t absolute deal-breakers by themselves but when the game is so monotonous it certainly doesn’t inspire you to keep coming back for more.

Warhammer: Chaosbane takes a loved universe and meshes it with a tried-and-true genre and delivers exactly what you would expect – no more, no less. It’s the kind of game I’ll come back to with my friends when we are looking for something simple that doesn’t require the same level of intense focus as something like The Division 2 or Apex Legends. Even so, with repetitive missions, samey environments and uninteresting loot, Chaosbane struggles to come close to matching the game that it’s so heavily referencing.