Double Fine, creators of Grim Fandango and Psychonauts, have come out with their newest title, RAD. A suitably stylish roguelike set in the nuclear post-apocalypse, RAD certainly presents itself well. Players will have to venture out into the wastelands again and again, making incremental progress.

RAD sets itself in a very 1980s-themed post-apocalypse,  where human survivors stay protected with old technology from the previous civilisation, the Menders. You play as one of eight teenagers, venturing out into the radioactive Fallow and restore power to your community. However, you can’t survive long out there against mutant threats without acquiring some mutations of your own.

These mutations form the backbone of RAD’s hook to encourage diving back in for another run. Every time you acquire enough ‘rads’ through defeating enemies or consuming items, you gain a new mutation. These can range from passive buffs allowing you to resist a certain element, to new appendages granting you new attacks.

The active mutations are pretty varied and creative. They range from a venomous snake head, to boomerang arms and a set of wings. I think my favourite so far is the mutation which creates a weird mutant parasite on your back, who either fires ranged attacks at your enemies from behind, or can be released onto the ground to make a portable turret.

Of course, how well you do in RAD will largely rely on luck. That element of randomness is built into the Roguelike genre; the thrill of getting great loot in a run is a part of the charm.

However, your default weapon is an under-powered baseball bat without much range. The enemy Muties all tend to either rush at you or attack from range. As such, you’re not going to get far unless you get lucky and acquire some of the ranged mutation powers.

I liked acquiring mutations and going back to the hub world. Each of the NPCs around the place seemed to have unique reactions to different powers. It was a fun little touch that encouraged seeking new mutations to show off.

Progress between runs can be slowly made by banking Casette Tapes (the local currency) in between levels to be spent in the hub area. It’s kind of more circuitous than the usual way modern Roguelikes do it, where players automatically earn special currency which can be maintained across runs. However, it added a sense of risk to how you use your Casette Tapes; do you hoard them for future runs, or take them with you now in case you find a shop out in the wilderness? 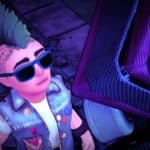 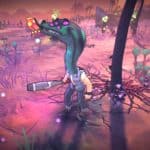 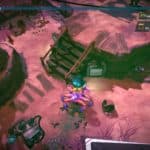 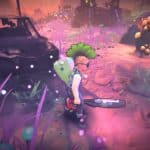 RAD’s visual flair and synth-heavy soundtrack help give it a lot of personality. The entire presentation SCREAMS 1980s, from the fashion to the cassette tapes. There are even small touches, like the screen sometimes flickering like an old CRT monitor, which I found quite charming. I also liked the hammy narrator, who makes weird utterances like “JUICY” or “LUSCIOUS” every time you use items.

There are hints of the anarchic soul of Double Fine’s previous titles, such as Psychonauts. However, a good roguelike thrives on variety, and if you DON’T like neon colours and synth instruments, you probably won’t have a good time.

“…if you DON’T like neon colours and synth instruments, you probably won’t have a good time.”

Despite the procedurally generated maps promising endless variety, it doesn’t take too long for the repetition to sink in. Whenever I died, I would have to trudge through the hub world and two separate loading screens to return to the action; an Enter the Gungeon-style quick-restart option wouldn’t go amiss. Alternately, more permanent buffs across runs would at least create a stronger sense of ongoing achievement.

Because players unlock permanent progress so slowly, it is hard to gain a sense of long-term reward from RAD. Sometimes I would get lucky and acquire some useful mutations which would carry me for several levels. If I ended up without a good long-range option before the first Alpha Mutie boss, it was almost better to just restart. Moreso than a lot of roguelikes, I really felt at the mercy of the RNG when it came to success or failure.

Despite some questionable design choices, there is still enough promise in RAD to recommend. Every time I would get discouraged from a bad run, the next attempt would lead to me getting several great powers early on and having a blast. Exploring the neon wasteland is exciting, and the crazy 80s style that RAD brings is hard to dislike.

If you are prepared for some slow starts as you struggle to get those initial combat powers in a run, it is possible to get on RAD’s wavelength and have a good time. Those looking for another solid roguelike could do better than RAD, but they could also do a lot worse.