The Legend of Zelda: Link’s Awakening Review – A Legend of Perfection

The Legend of Zelda: Link’s Awakening initially released on the Game Boy in 1993. The Hylian Hero’s first handheld adventure is focused and critically acclaimed. It quickly became a fan favourite by coupling A Link to the Past’s 2D gameplay with surprising cameos from other Nintendo games.

26 years later, Nintendo refreshes the classic side-venture with skyward polish and class. Link’s Awakening on the Switch captures the feel of the original and adds new features to enrich one of Link’s best adventures. It is a near-perfect remaster with colourful characters, a myriad of monsters, and puzzling dungeons to conquer.

The journey begins with our small friend washing upon the tropical shores of Koholint Island. He is quickly tasked with finding eight musical instruments to awaken a slumbering guardian, the Wind Fish. Ulrira, Marin, and the rest of Koholint’s residents all hold wishful hopes for Link’s return home. By climbing Mt. Tamranch, belting the Ballad of the Wind Fish, and hatching it from its egg cradle, our hero’s quest only begins to thicken…

The story is simple and short, albeit with an expected twist. New players seeking a deep and meaningful story will need to look elsewhere. However, being identical to the source will make many fans happy. Experiencing the voyage in high-definition and a retro-modern art style is what really sets this remaster apart.

The ‘chibi’ look and tilt-shift perspective aptly fit the world of Koholint Island. Link and his friends are charming and delightful, as is the distinct line-up of strange foes. The power of the Nintendo Switch is on full display, with bright and colourful plains of the island mixed with gloomy dungeons, misty forests, and dusty ranges. Lighting in rooms feels warm and lived in, only achievable by the new hardware. Even the UI and menus receive a well-needed facelift, similar to Breath of the Wild’s amended design.

Fans love and cherish the music in Link’s Awakening’s on the Game Boy. The old-school bit-tune Legend of Zelda and Ballad of the Wind Fish melodies are nostalgic memories for many. The Switch remaster reinvigorates these tracks with higher audio fidelity and real instrumentation. A mixture of winds, strings, and brass instruments help blossom the wistful timbre of Koholint Island. Setting a unique tone for each area of the world, the score is intense and whimsical at the best of times.

“…modern Nintendo while capturing the praised charm of the classic adventure.”

Reimagining such adored visual and audio memory is no easy task. The developers at Nintendo EPD and Grezzo are clearly masterminds in their art. Audience is always in mind, perfecting a balance between attracting fresh players and seasoned fans. At times it is almost too Animal Crossing and less Wind Waker, which may be great or bad depending on personal taste. Regardless, the endearing style resonates with modern Nintendo while capturing the praised charm of the classic adventure.

Bringing the classic to the Nintendo Switch means more controller buttons to use. Extra controls makes using equipment, attacking, blocking, and jumping even more fluid. The directional pad of the Joy-Con adds to the impressive update of Link’s general movement. Judging the distance of jumps feels flawless, moving screen from screen is now seamless. Everything feels exactly right in Link’s Awakening.

With all beautiful cadence however, there will be a looming curse. Despite the hardware enhancements, at times the game will frustratingly slow down. Frame rate will drop significantly in handheld with several enemies or effects on screen, like the Goponga Swamp and specific boss battles. Not enough to ruin the adventure, it is still a shame a story like Link’s Awakening must suffer such a tenuous mobile overlook.

One of the biggest changes to gameplay is the ability to equip several items at once. Previously, only two items could be held at any one time. The Switch remaster allows Link to have his sword, shield, and two more tools mapped to the X and Y buttons. Having the sword and shield equipped introduces a new parry mechanic during combat. Link now needs to block incoming attacks from specific enemies to break through their defence and strike back.

These slight mechanical changes bring Link’s Awakening into the present. Changing items on the fly and having permanent unlocks like the Power Bracelet and Pegasus Boots is very convenient. Modernising the Green Hero’s controls while staying true to the original is always a tricky feat. Nintendo EPD and Grezzo alterations to Link’s Awakening’s gameplay mechanics and controls inflates the fun of the journey.

A new dungeon-building feature adds another spicy pepper to the dish. Players will unlock pieces of each dungeon they complete. By speaking with the fascinating looking fellow, Dampé allows players to construct their own puzzles. His shack replaces the defunct Camera Shop for the Game Boy Printer used in Link’s Awakening DX. Scan in Amiibos to receive Plus Effects, adding another twist to each unique dungeon. For example, using the new Link’s Awakening Link Amiibo will summon an unrelentless Shadow Link to stalk the player, improving score and rewards like the new fairy bottles. Again, another update aiding replay value and shows the love behind the craft of this remake. 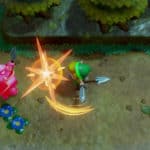 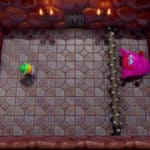 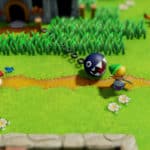 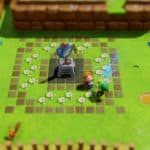 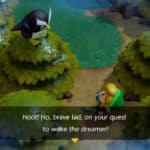 The Legend of Zelda: Link’s Awakening

The Legend of Zelda: Link’s Awakening is a must play experience for all Nintendo Switch owners. Traversing Koholint Island is stunning, as the remaster takes advantage of technology upgrades and Nintendo’s sleek and modern art style. A Triforce of fluent controls, improvements to inventory mechanics, and an astounding orchestral soundtrack help make this game an absolute wonder. The fresh additions boost our nostalgic memories while keeping the essence of the Hyrule Warrior’s classic adventure. As everything is subjective in art, valid faults and nit-picks will ‘minish the cap. Nevertheless, The Legend of Zelda: Link’s Awakening on the Switch is flawless in nearly every sense of the word.