Remnant: From The Ashes Review – Keep your wits

One of the reasons I joined Checkpoint is my pure love of games. I’ve played through hundreds of games over the years. Naturally this allowed for me to learn what does and doesn’t work for me in titles. Take a bit from this game and a little from that, oh and maybe a bit of that one. Rarely have I found a game that’s amalgamated everything I love from games in one single package. Remnant: From The Ashes, from Darksiders II developer Gunfire Games, is one of those games.

You begin the game with a character customisation screen. Here you choose your class, gender and other more minor features. There isn’t a lot of range here but it doesn’t really matter either. It still was enough for me to fill the role of my character, a powerful and heroic healer with a cowgirl look. Now, your adventurer is rudely thrust away from their goal right in the opening scene. A cruel tidal wave has knocked our hero ashore and they’re soon up against some of the foes they’ll revisit later in this post-apocalyptic Earth. This introduction is very fast paced and you hardly get a chance to register these enemies. Before long you’re attempting to save a stranger you come across. No such luck of course, they die and you’re downed, barely escaping with your life. This excellently sets the tone of the game: You’re a down on your luck adventurer, with your end goal always just out of reach.

Soon after you awake in a shelter known as Ward 13. It’ll serve as your hub area where, thanks to some friendly and charming locals, you’ll get to upgrade and buy weapons, armour and items. Purchasing of perks, which tie to your weapons, is also available here. They’re sold to you by a cute, grumpy female mechanic. All of the characters in the hub have a bit of personality but it’s mostly surface level. This is okay, they’re not exactly there to drive the plot forward, just help you back up on your feet and getting geared up to venture out.

Pieces of the mystery of why Earth has fallen start to make more sense here in the Ward. You learn more about the foes you faced earlier, The Root, and how they’ve come from another realm and are now conquering Earth. You activate a giant crystal shard in the Ward and this then allows you to travel elsewhere on Earth, where you need to progress. This too will later let you travel to other realms. Soon after you’re off, searching through foreign realms with terrifying enemies for Ezlan, a character mostly spoken about in hushed tones.

If you think you’ve heard of this before it’s because you have. It’s your typical open world adventure game, filled with bosses, mini-bosses and the like. We’ve seen it mastered in games like Dark Souls. We’ve also seen other much-loved games pay faithful homage to the genre like last year’s Ashen. Remnant: From The Ashes falls into the latter.

“You’re a down on your luck adventurer, with your end goal always just out of reach.”

As stated before, Remnant: From The Ashes is a game that borrows from a lot of games. Peruse the game’s  Steam reviews and you’ll see how many a gamer are likening it to Soulsborne games. This is the clearest comparison the game has. The shards in the world you use to also travel and rest at work much like Dark Souls’ bonfires along with your limited healing items and aids. Where it differs from these titles comes clearly in the game’s gunplay.

Gunplay feels quick and frantic. You must use this to your advantage in Remnant. A well timed dodge followed by a shotgun pop to an other-worldly creature’s head just feels ridiculously satisfying. Oddly enough however, ammo is never really all that scarce in Remnant. It’s an odd choice. For those less seasoned in games of this difficulty it’ll come as a relief, but I can see how it can ruin the otherwise great survival and preservation elements the game offers.

I would by no means liken this game’s difficulty at all to games like this year’s Sekiro. Remnant, while challenging, has means to be more forgiving with its difficulty. Co-op is here too. This can go one of two ways. If in a party and coordinated, it can bring the fight to your advantage. If you’re playing publicly, without a friend or party, it could come as a detriment. For me I had the latter, so I constantly had players joining in and out a lot. In this case, the most vocal action you’ll get is the cute little quips characters will say to each other after taking down foes. This can make for good, (mostly) silent companions as there doesn’t appear to be in-game voice interaction in the PS4 version, but strategising with these players can clearly prove difficult. However it wasn’t too much of an issue for me, and could just be refined down to player preference. That being said, combine the challenging limited communication with finally toppling down a monolith sized beast and it feels very rewarding.

Graphically this game won’t change the world, at least on the PS4 version. Textures up close can sometimes appear rough but the scenery in general holds up quite well. One of the realms feels very reminiscent of Star Wars‘ desert planets, with its Destinyesque dungeons. Or there’s the swamp realm complete with ugly creepy crawlies and a moth queen. They’re quite striking to look at, especially considering they’re procedurally generated when it comes to the dungeon pathways. Some instances, like the Earth’s underground sewers, don’t quite pack the same punch in this regard however. 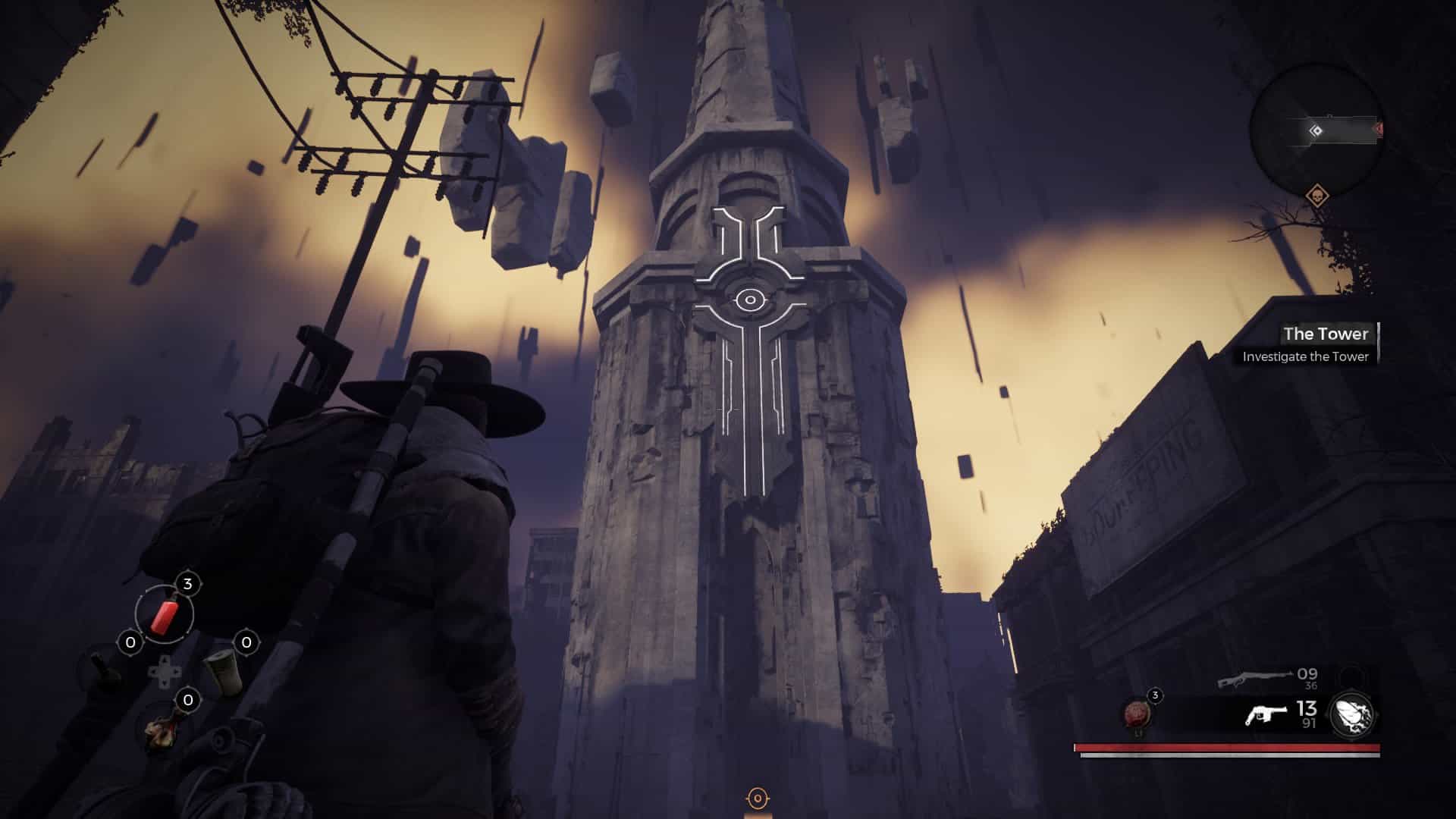 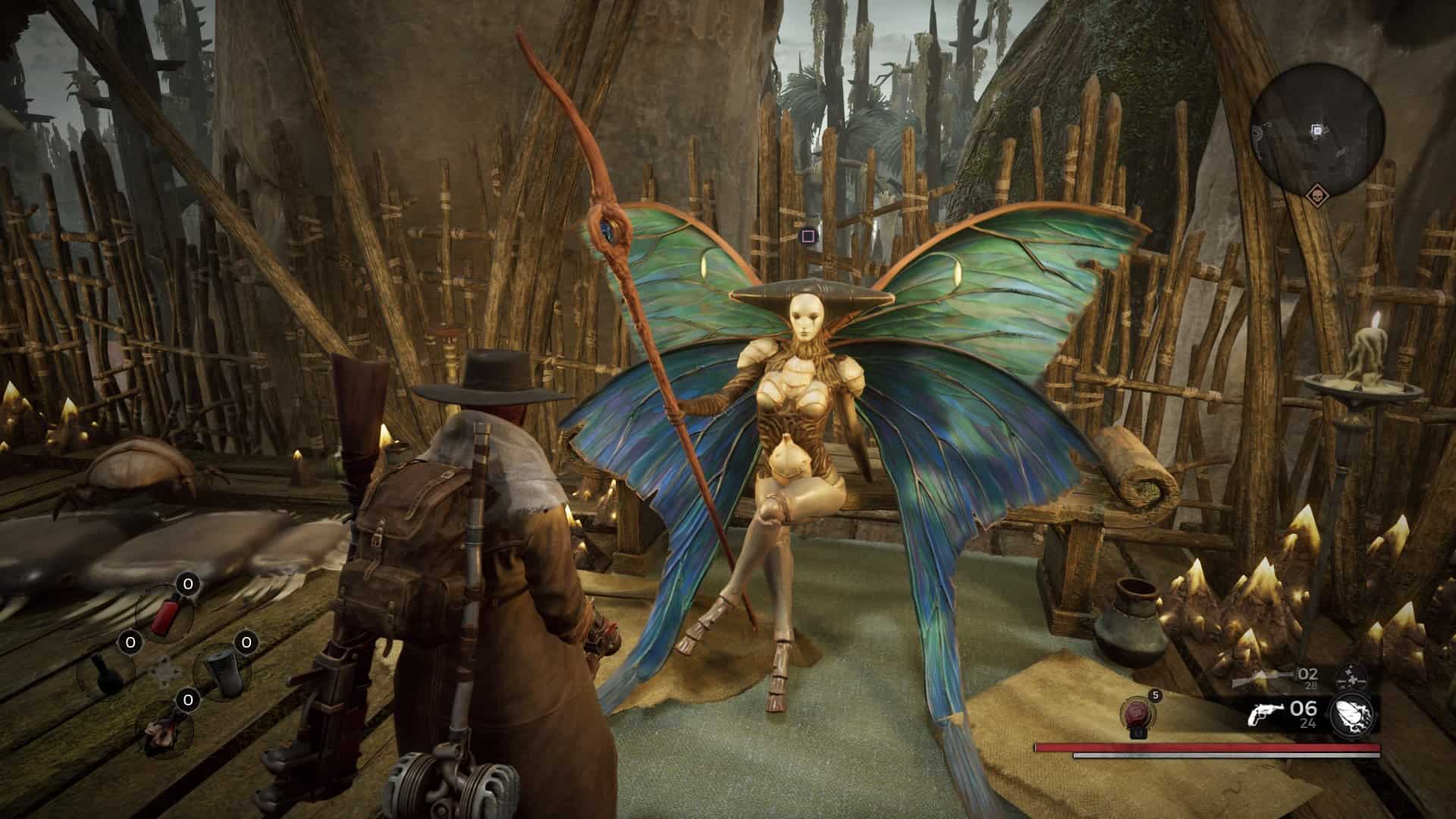 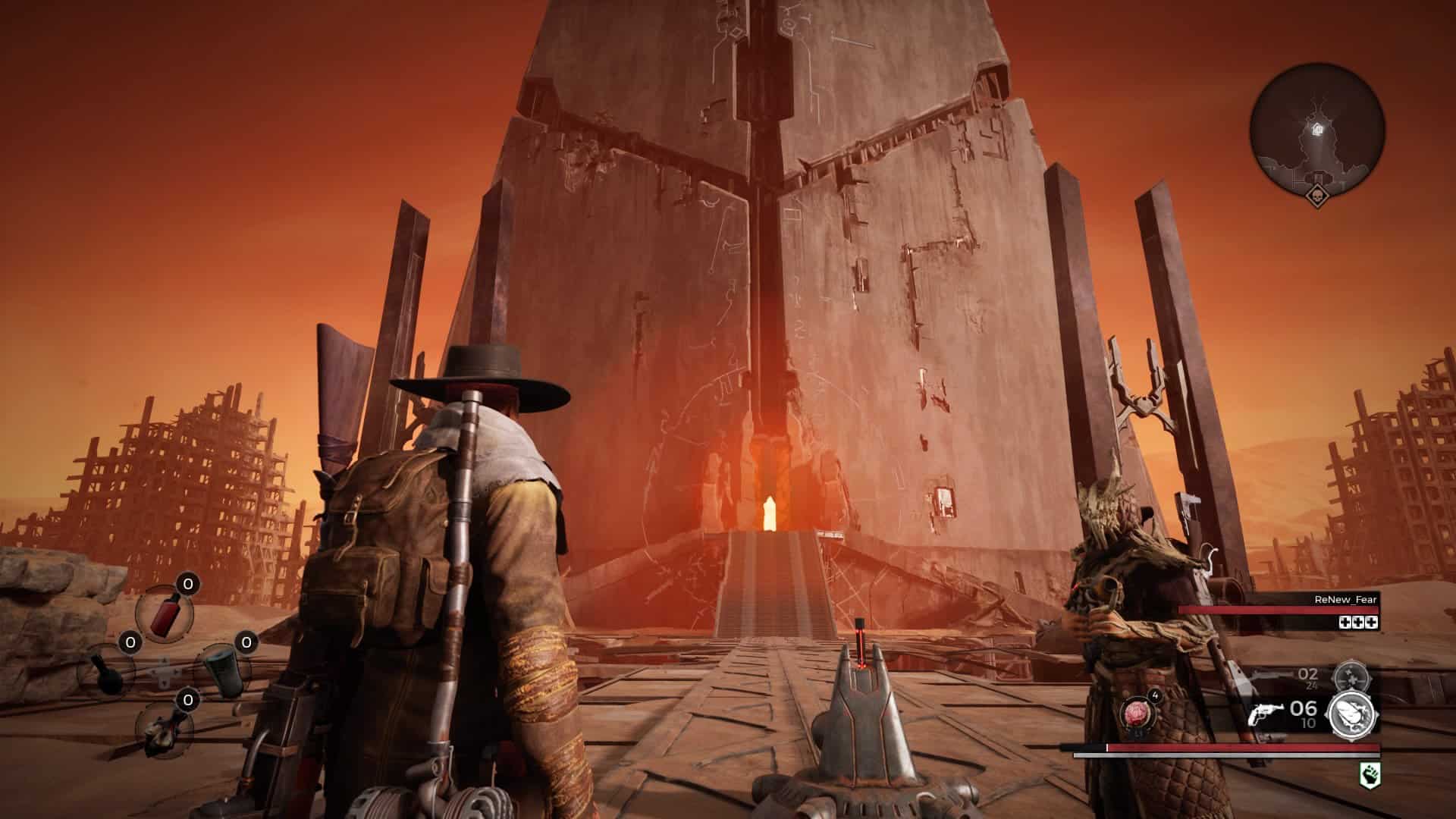 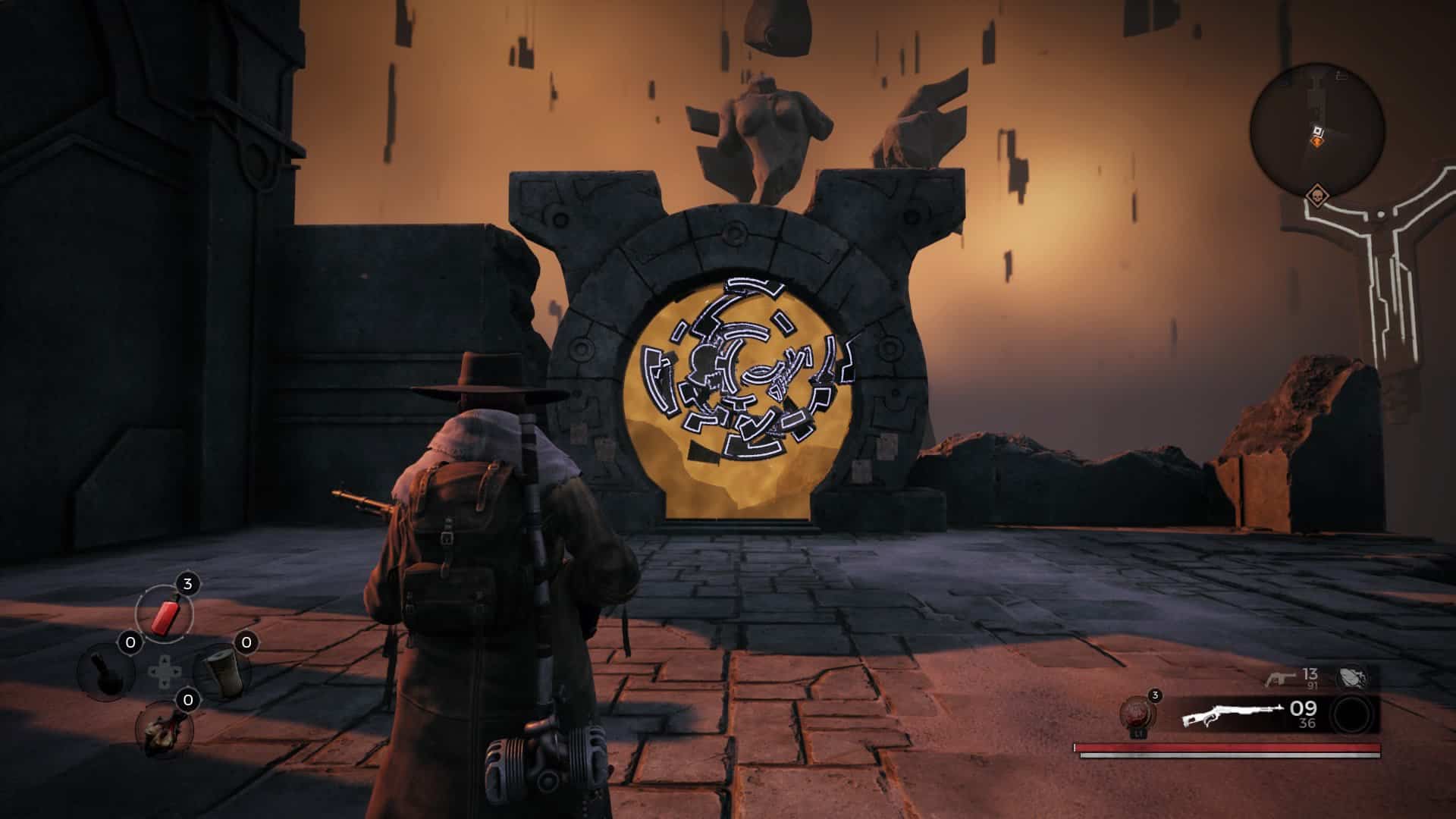 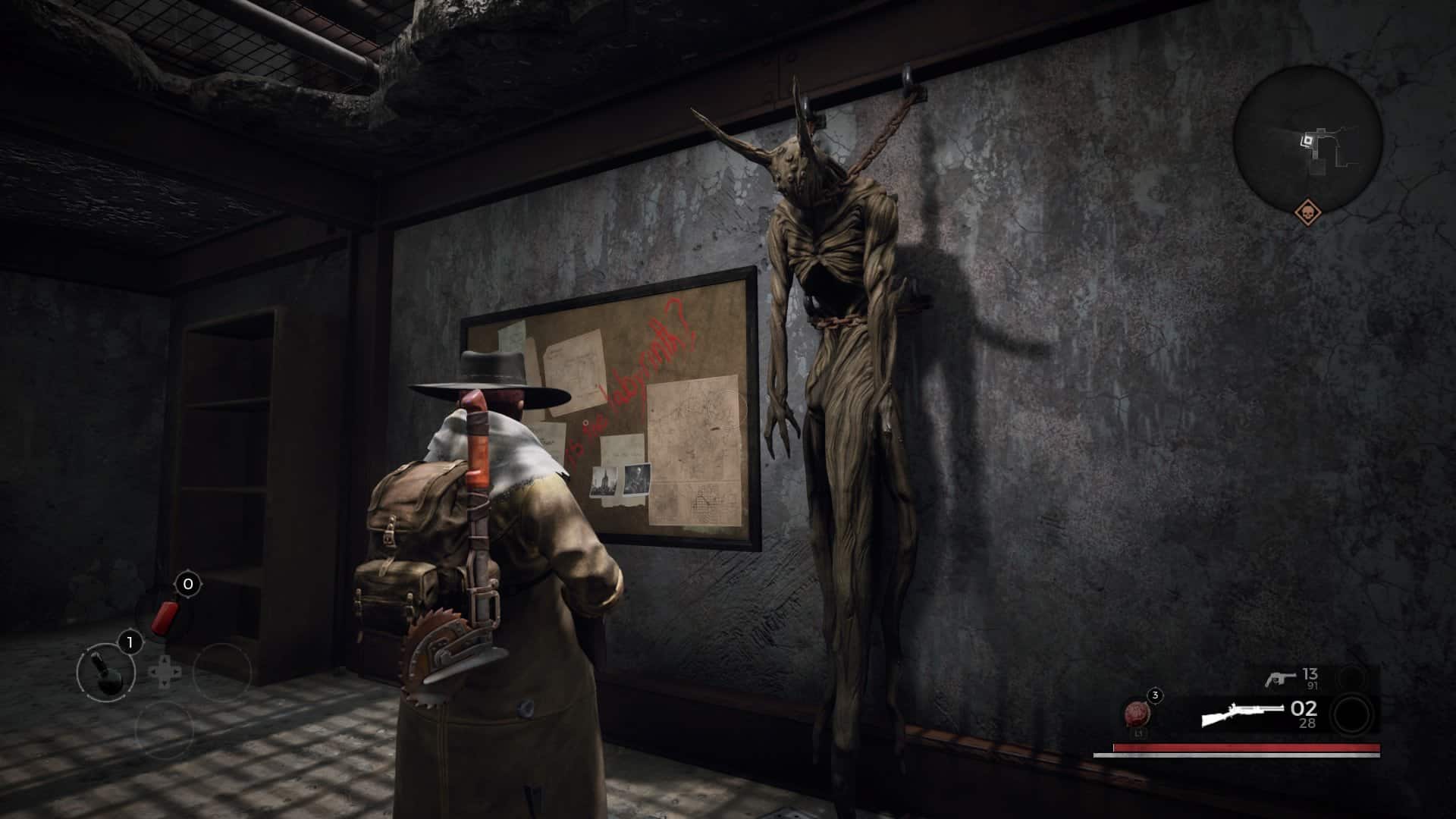 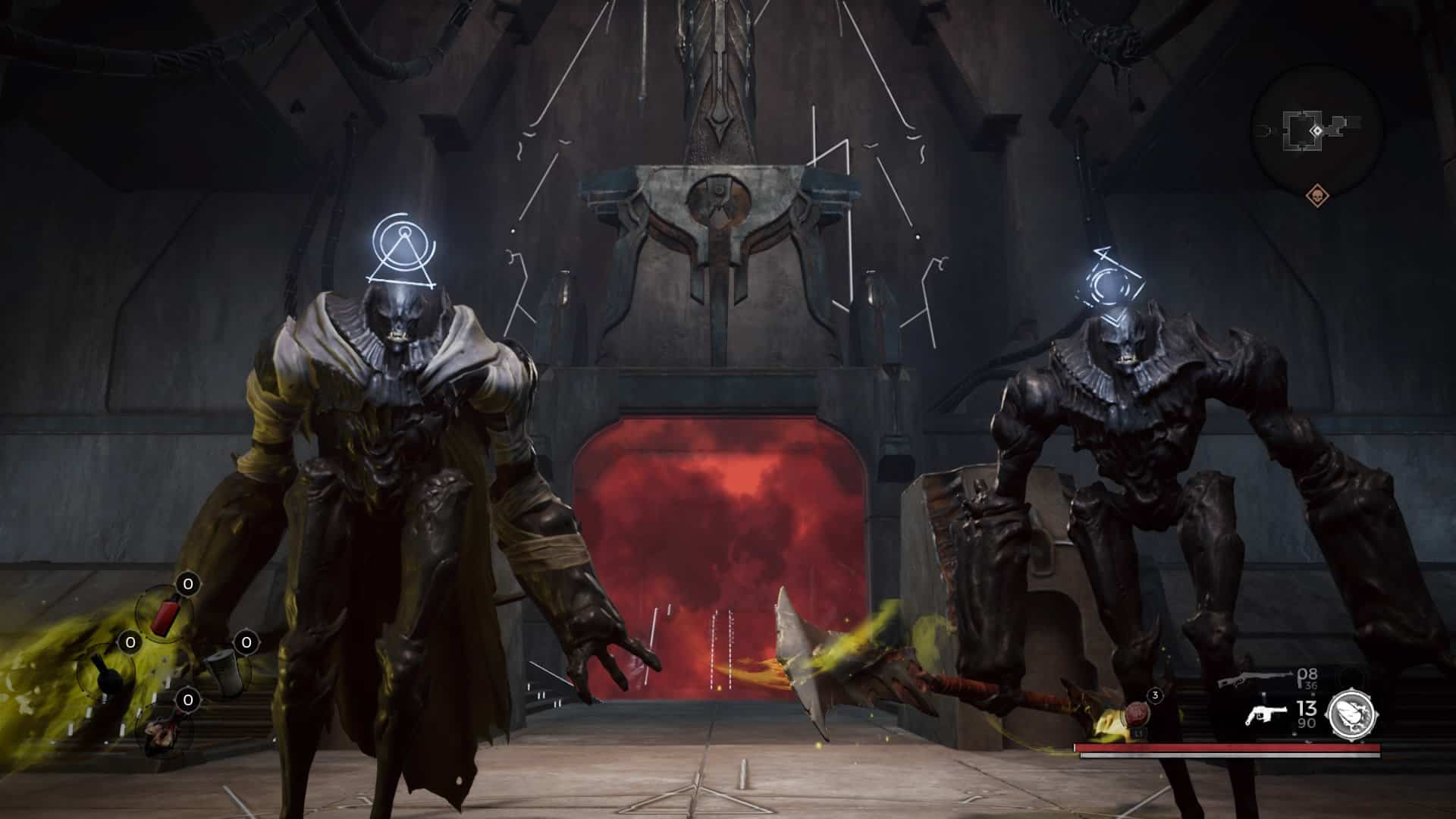 The monsters you meet, whether they’re friends or foes, small or big bosses, are designed quite well too.  There’s quite a big range of them and I think that helps in creating more memorable enemies. Remnant: From the Ashes takes a lot of inspiration from enemies of past games but finds new ways to work with them. There’s acidic crawlies that look like they’ve come straight from the Gears of War franchise, nomadic human/beast hybrid characters with creepy skull masks, or just some slimy, slimy beasts.

Your player character and the NPCs you’ll meet along the way aren’t designed badly by any means, but the most interesting designs were certainly the plain, old, gross, tank-like beasts. One I was pleasantly grossed out and thrilled to go toe-to-toe against was a big, oily foe known as The Unclean One. They have a big belly protected with silver plated armour. As such, their weak points are both their upper chest and their rear. According to the lore on their wiki entry, he’s even a gentle soul at heart, aw.

Remnant: From the Ashes does a phenomenal job in using bits and pieces from a lot of hit games to form a celebration of video games over the years. It won’t dethrone or distract from games it shares a likeness with either, but boosts them up even more. Even when I finish up here I won’t be ever really done with this game. There’s still boss encounters, other abilities and loot you won’t find on your first run. I’m also very excited to find a friend to rope into getting this game and playing with me for a more strategy based approach. Gunfire Games have done an excellent job with Remnant: From The Ashes and I recommend even those nervous about the genre’s difficulty, like I, to jump in if they’re feeling a little brave. Now if you’ll excuse me I got some loot to earn!