Planet Zoo is a zoo management simulation game developed and published by Frontier. Similarly to the way Planet Coaster is a spiritual successor to Rollercoaster Tycoon, Planet Zoo is a spiritual successor to the Zoo Tycoon games first released in the early 2000s. Bringing together gameplay elements from both franchises, Planet Zoo offers players a complex simulation game with plenty of depth. Players must build and manage everything in their zoo themselves; tasks range from building enclosures, to hiring staff, to animal welfare, to making sure guests are well-fed and happy.

One of the things that immediately struck me when booting up Planet Zoo was the sheer beauty of the game’s visuals. Guests, zoo animals, and the environment are rendered in great detail, and the game even allows you to zoom in so closely on things like individual kiosks and snack shops that you can see your vendors typing in amounts on their cash registers.

Through the game’s animal camera feature, you can also zoom in on animals through a tracked camera, allowing you to follow your favourite zoo animals and admire their individual behaviour and expressions up close. This is worth doing, too, since each animal included in Planet Zoo is impressively realistic, both in looks and behaviour. As a result, it’s easy to while away the hours watching a pair of Bengal tigers or a pack of lemurs.

Thanks to these stunning visuals I found myself taking the responsibility for these animals’ lives a whole lot more seriously, which in turn drew me further into the game; if you want to keep your animals happy and healthy, there’s plenty to keep track of. I quickly found out that managing a zoo proves to be a layered and often complex task, and rather than just drop animals in an enclosure and be done with it, you’ll find yourself regulating things like temperature and humidity, food quality, and the hierarchy of a group of animals in the same enclosure.

“…Planet Zoo successfully captures the complexity and reality of what it takes to manage a zoo without sacrificing the game’s relaxing atmosphere.”

You might not expect this range of complex data available in Planet Zoo when first launching the game; Planet Zoo’s interface looks clean and inviting at first, but there’s a plethora of data hiding just beneath the surface. Once you click through different buttons and tabs, you’ll quickly find sprawling menus for hiring staff, breeding and adopting animals, guest happiness, and more, and most of this data is relevant and needs to be monitored in order to keep your park afloat. 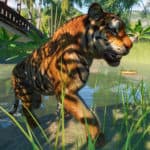 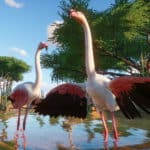 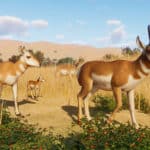 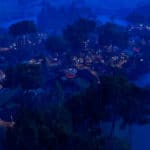 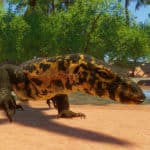 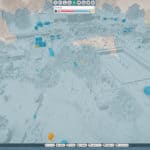 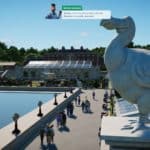 This level of depth will undoubtedly feel intimidating to some first-time players, but luckily the game offers you different modes to customise the way you want to play. Through sandbox mode, for example, you have the option of creating a zoo with immortal animals and an unlimited amount of money, which is a perfect fit for those who want to build without constraints instead of managing fussy zoo guests or animals. Alternatively, in the game’s franchise mode, you can set up your own set of zoos across the world and manage the economy of each park individually. This mode also gives you the option to take part in online community challenges and trade animals with other players online.

Tutorials are offered through the game’s career mode; through a range of scenarios with a quirky narrative, you’ll find yourself being trained as an apprentice zoo manager by Bernard Goodwin, a zoo veteran who owns several parks around the world. Over several scenarios, Goodwin will have you complete increasingly complex tasks in several of his parks scattered across continents; each scenario will take you to a different one of Goodwin’s zoos, and highlight different aspects of the management process. While the first scenario might focus on simple things like building and managing an animal enclosure, the last scenario will have you manage more complex things like quarantining animals and setting up several enclosures without guidance.

I found these scenarios incredibly helpful because they allow new players to get acquainted with the game’s features at a leisurely pace while still being accessible to veteran players. Although completing these scenarios might take you several hours, it’s a great way to get a handle on the game’s mechanics without getting overwhelmed. What’s more, several detailed menus are buried quite deeply within the interface and, without any guidance from a tutorial, new players might find them difficult to find.

While the level of detail in Planet Zoo might be too much for some, I found that the game’s complex management system was one if its greatest strengths; through its gameplay mechanics, Planet Zoo successfully captures the complexity and reality of what it takes to manage a zoo without sacrificing the game’s relaxing atmosphere. Complete with a beautiful soundtrack and colourful graphics, this game is engaging and relaxing at the same time, while still giving players challenges to properly sink their teeth into. If that’s your jam, Planet Zoo is not to be missed.

If you enjoyed Planet Coaster or any of the Zoo or Rollercoaster Tycoon games from the past, Planet Zoo will be worth every penny.

Lise is a writer and communications professional by day and a gamer and storyteller by night. They’re a games, animation, tech, and television buff, and have published short stories and scripts. When not playing videogames, you can find Lise drawing or trying not to kill their houseplants.