Like the series which developer Compile Heart is known for, Hyperdimension Neptunia, Arc of Alchemist is a tactical action RPG with a roster full of cutesy anime characters. It’s pretty much the developer’s bread and butter, but if that makes you think that’s a good sign about the Arc of Alchemist’s quality, think again. It was first released in Japan back in 2019, but hasn’t hit the West until now. This version has been updated with new features both in combat and out, but unfortunately the updates aren’t likely to give this game much of a second chance.

Set thousands of years into our future, Earth has become an arid dustbowl after the oceans dry up and nation after nation falls to war. Humans survive in settlements, separated from each other, and resources are dwindling fast. Major Quinn Bravesford and her expedition team is tasked by their Lord to find the “Great Power” hidden somewhere in the desert wasteland, in the hopes that the legendary item will save humanity from extinction.

Starring Quinn and her team of chibi anime-like characters, the gameplay is your standard action JRPG fair. You can venture out with a party of three at a time, exploring each area and taking on enemies. Quinn can use her “Lunagear”, a special alchemic device, in battle or as exploration abilities. The Western release comes with two major additions: you can now play as any one of Quinn’s expedition team, and you can now customise your home base with new facilities using the materials you find out in the sand, granting you better gear and items. There’s the bones of a decent experience here, but it’s bogged down with frankly embarrasing and outdated gameplay.

I don’t mean outdated in a charming or nostalgic way, either. Sure, it all works: combat is passable, with flashy attacks that connect satisfyingly enough while dealing damage to enemies, and the home base mechanics are entertaining enough to tinker around with. But it’s all thrown together carelessly, creating a clunky, unoptimised experience that instantly transports the player back to 2006.

Despite advertising its tactical elements, there’s very little to the battle system. It’s a hack-and-slash style, where mashing buttons and dodging will make up the majority of your strategy. You can set the position of your party relative to the character you control, and what abilities they equip, but it makes very little difference to the gameplay. Mechanics that would really make life easier, such as the ability to command party members to perform specific actions or use items, are infuriatingly missing.

The game’s looks are a huge turn-off as well. Certainly a game doesn’t need top-of-the line graphics to be good looking, but these stiff, motionless character models aren’t exactly endearing. The admittedly well-done character designs done by Yoshitaka Amano, who worked on several Final Fantasy titles, are wasted on static 3D models with barely any animation. On returning to your home base you’ll be greeted with a cute cut-scene between your party members that give them a bit of character, but they never get much deeper than their contrived archetypes.

Despite this, I kept a lukewarm interest in the developing story… until it became clear there was no development to be had here. The story that exists is told entirely through expository dialogue boxes and monologues, with an ending that comes far too quickly to leave any impact at all. 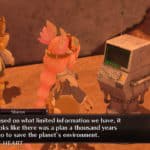 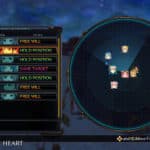 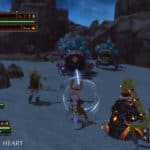 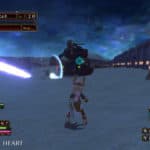 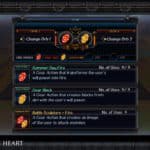 “the game’s desert setting is
simply a convenient excuse to
have its world filled with nothing.”

Likewise, Arc of Alchemist is hardly a technical marvel: its performance is constantly choppy both in and out of docked mode. The frame rate, which has constant trouble keeping up with the party’s brisk pace, drops noticeably whenever the camera changes angle.

The game just isn’t well crafted. It cheerfully suggests that you use Quinn’s Lunagear to create platforming blocks to reach high places, without bothering to make the platforming anything less than painful. Tutorials are plain, uninteresting, and overly frequent; the levels are wide and free to explore, yet are filled with barely anything interesting. Occasionally you may come across an item or a trap hidden in the sand, but by and large the only engaging aspects are the enemies that spawn everywhere. It really feels as if the game’s desert setting is simply a convenient excuse to have its world filled with nothing.

There are some elements of Arc that aren’t so bad. In a better game, the home base mechanics would have been a great addition. Your home base is fun to tinker around with, upgrading facilities and watching the number of available weapons and accessories grow. Placing certain facilities next to each other can even grant you bonuses.

You can craft camps in certain locations of the world, which helps you heal and change items or weapons on the go. You can train your party members in specific stats for some extra party customisation, too, but unfortunately the game’s lacking combat system makes this a waste of time.

There are so many lazy design choices contained within Arc of Alchemist that I’m left unsure of what Compile Heart were even trying to attempt. There are some fun aspects in the home base preparations, but it’s in service of an experience that just doesn’t live up. The story is barely 6 hours long with nothing in the way of side quests to keep you distracted, and the setting and characters are so half-formed that you’d be forgiven for thinking that this was an alpha version of an unfinished game. Sorry, JRPG fans. This just ain’t it.

Arc of Alchemist could have been a fun tactical RPG. Trouble is, it’s squashed between outdated exploration, a half-formed battle system, and a general lack of polish that altogether makes the game’s flaws impossible to look past. If you have the money to spare for this game, please just go buy Persona 5,  or even Tales of Vesperia: Definitive Edition if you’re that desperate for an action RPG on Switch. Within the context of the many fantastic JRPGs that are out there, I can’t pretend Arc of Alchemist is worth your time.