Since the company’s founding in 2008, Japanese developer Platinum Games has developed some of the most beloved action games in recent times. This month marks the 10th anniversary of two of its fantastic early releases, Bayonetta and Vaniquish. They form a curious pairing, considering Bayonetta went on to become a successful Nintendo-published franchise, while Vanquish stayed in relative obscurity.

In this re-release, both titles have been ported to the PS4, with improved graphics and performance. This bundle is a good opportunity to go back in Platinum Games’ history to see where the studio’s reputation for stylish action games began.

Despite their close release dates, the two titles are stylistically very different. Bayonetta feels much like a spiritual successor to Capcom’s Devil May Cry franchise, with a similar emphasis on combo-based action, high difficulty and detailed enemy and level design, complete with its own convoluted mythology. Vanquish, by comparison, is essentially a third person military shooter, albeit with a lot more emphasis on movement and manoeuvring around the stages. 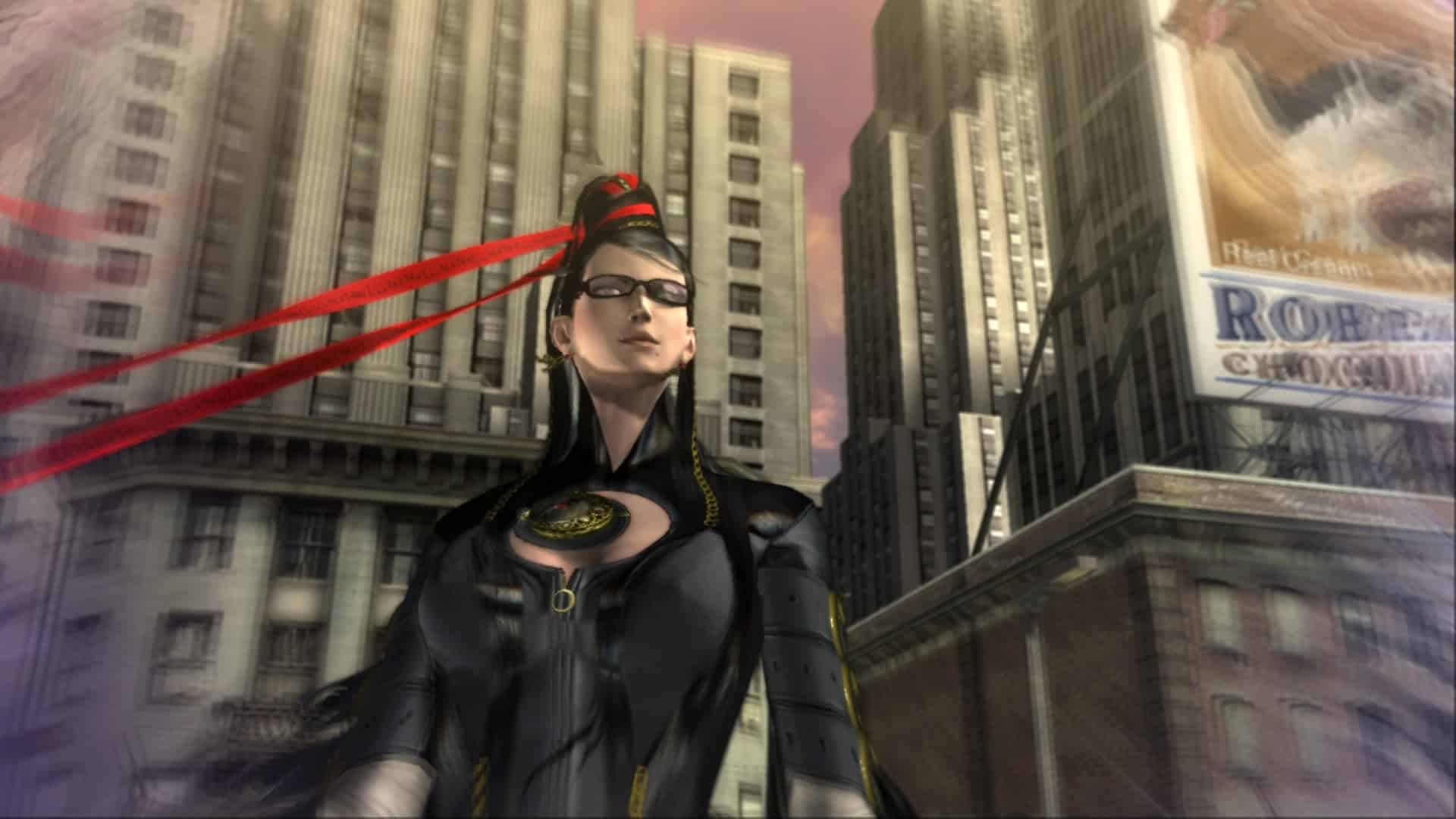 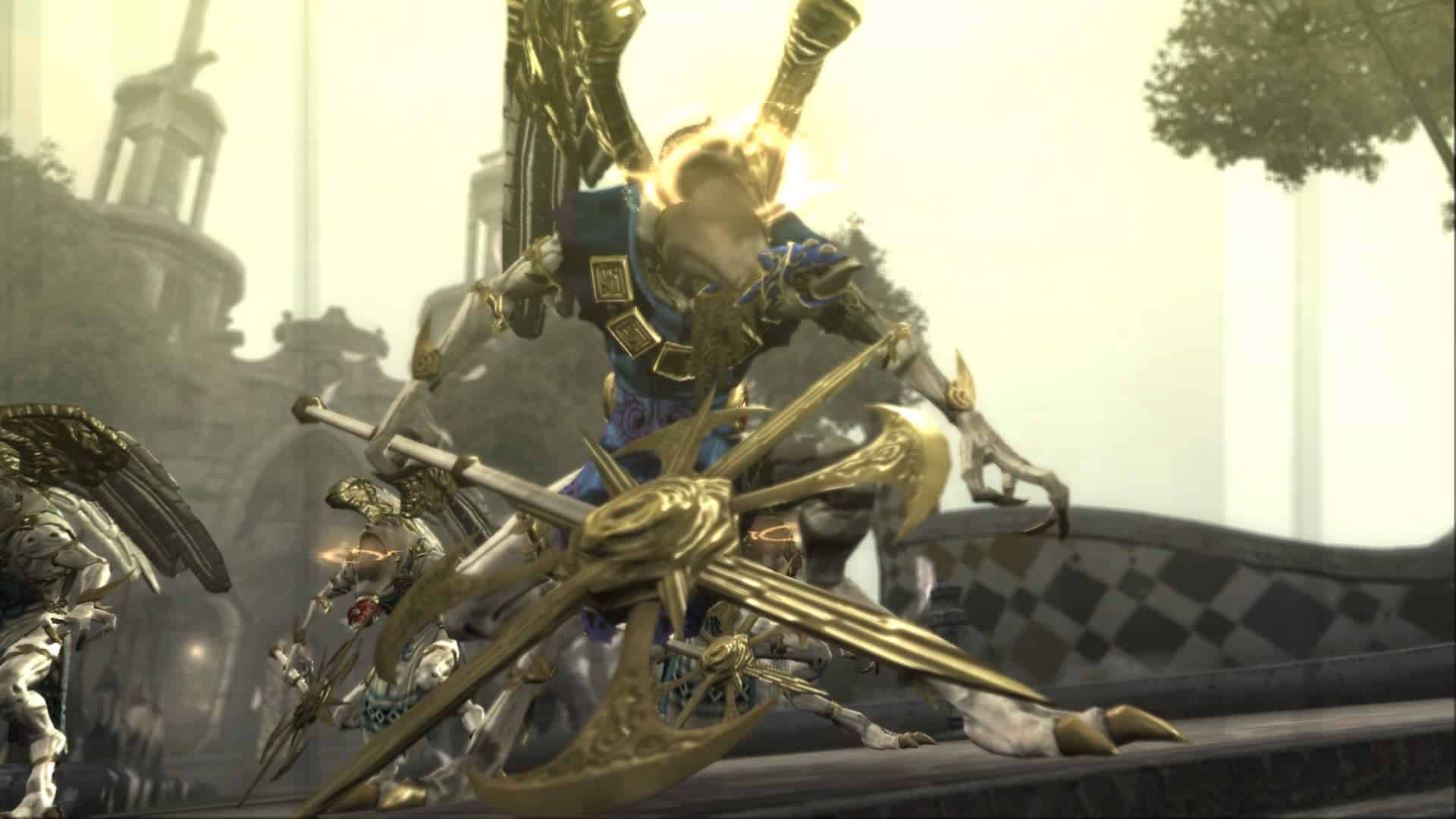 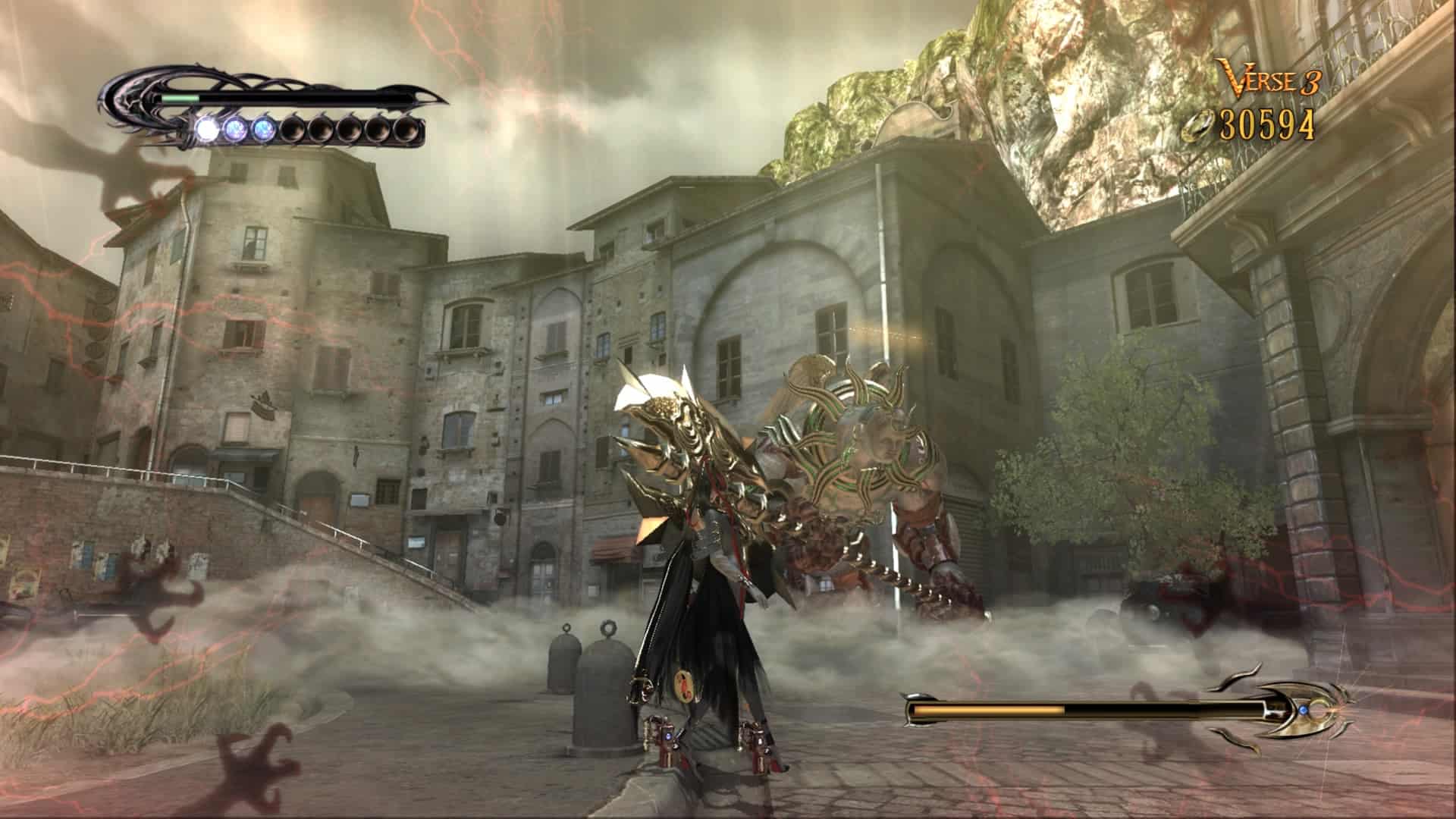 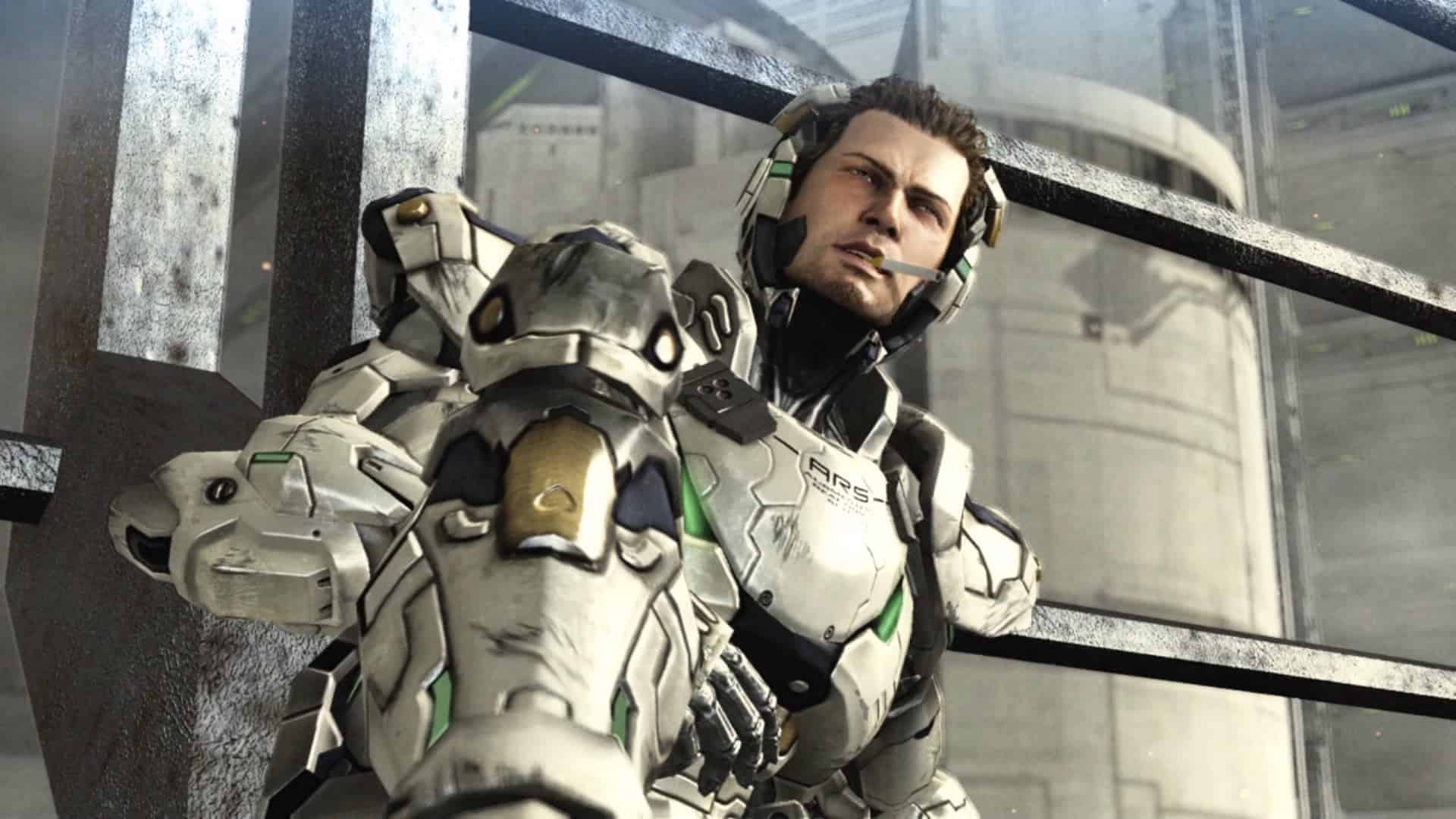 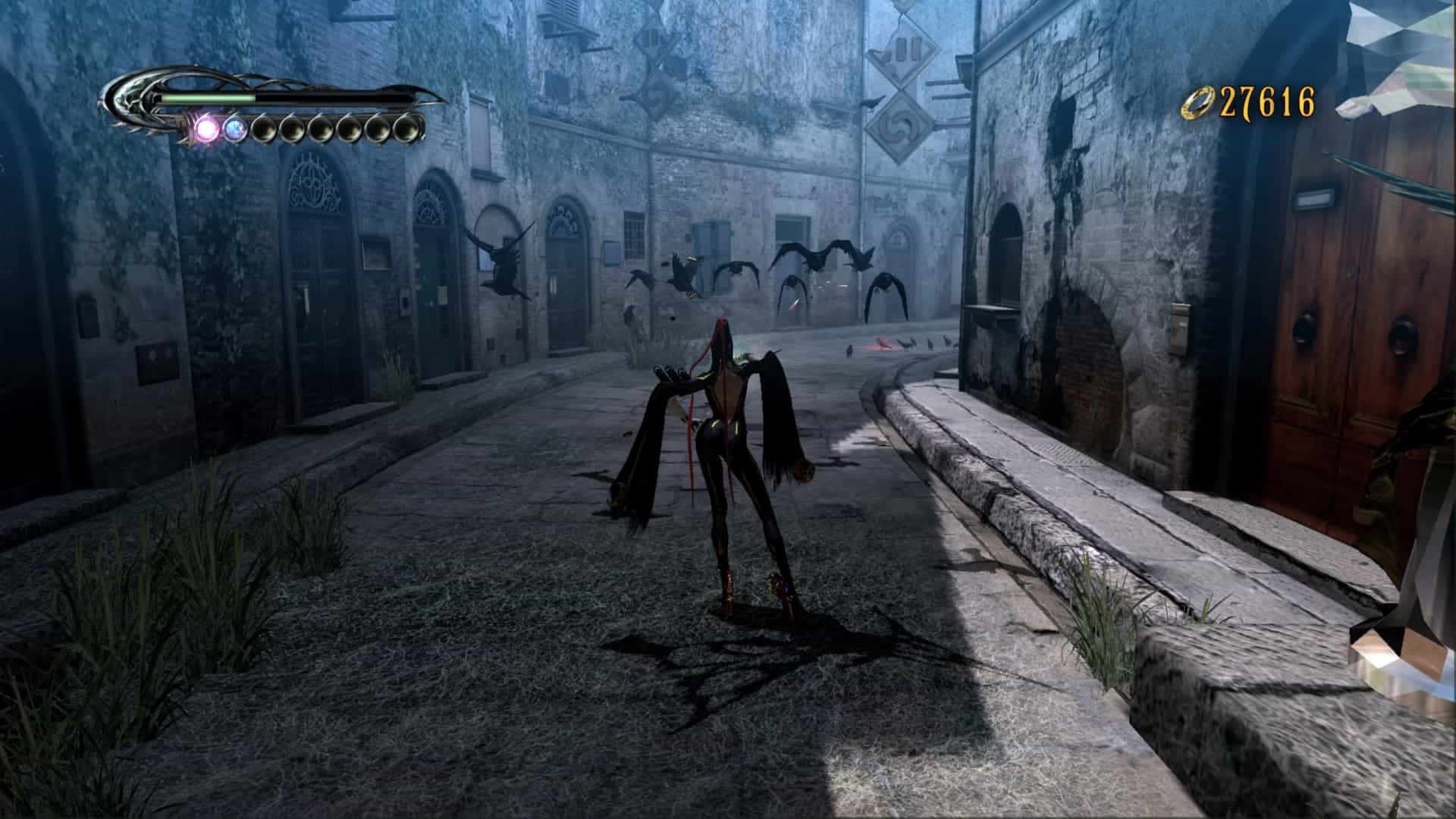 As it was the one I hadn’t played before, I started the collection with Vanquish. Set in the future, where Russia hijacks an American super-weapon, you play as DARPA agent Sam Gideon who is sent up with a team of marines to prevent Russia from striking New York. The plot felt weirdly conventional for a game from this studio, especially considering it would not have felt out of place compared to many of the plots that the Call of Duty franchise was coming up with at the time. Just about everyone comes across as some kind of stereotype, from the foul-mouthed, grizzled lead to the even fouler-mouthed, even more grizzled army commander that Sam has to work with.

Fortunately, where the story falls flat, Vanquish’s awesome shooting compensates. While Sam can take cover to fight his opponents, his special Augmented Reaction Suit is equipped with a pair of rockets strapped to his knees that let him jet across the battlefield with the push of a button. This allows Sam to dash to and from cover, into enemy mobs and away from danger. The level design fortunately favours wide, open spaces, giving lots of room to move about. It is a wonderfully intuitive mechanic that I am surprised hasn’t been adopted by more shooters.

Vanquish also includes the ability to slow down time at will. The slo-mo ability feeds off the same resource metre as the rocket boost, so managing your energy to ensure you can move around and line up the perfect shot is crucial. There were some clunky aspects, like how the melee attack totally drains the metre, or how slo-mo automatically engages when you are near death without warning. Overall, however, I felt Vanquish’s gunplay definitely drew me in and kept me wanting more.

“…if Vanquish has a major flaw, it is a lack of variety. It is not long before the game starts to repeat itself.”

That said, if Vanquish has a major flaw, it is a lack of variety. It is not long before the game starts to repeat itself. Bosses return frequently. The enemy variety isn’t great, with 90% of them being disappointing robot goons. Even the level design is mostly stark, white or grey industrial areas.

Overall, Vanquish has some great ideas, it just needed a better story and setting to use them in. Hopefully Platinum Games or another studio can utilise some of these gameplay ideas in a new game one day.

Bayonetta, by contrast, I had played back on the PS3. Having played Bayonetta 2 on the Switch more recently, it was a strange sensation going back to how the series started. Bayonetta, as fans may know, follows the story of the titular witch, who fights angels with a combination of breakdancing and BDSM techniques. The premise is very strange, and gets stranger as the game unveils its own somewhat convoluted mythology. The game starts with Bayonetta killing angels in a graveyard set to a cover of Frank Sinatra’s Fly Me to the Moon. From then, each level escalates as Bayonetta is sent across heaven and hell, fighting bigger and more elaborate enemies.

Bayonetta’s mix of hack and slash combat and light platforming feels as fresh today as it did ten years ago. The distinctive and detailed character designs and art direction also help the visuals age well. However, there are some aspects of its design that haven’t aged as gracefully, such as the cutscene quick time events. These are button presses during cutscenes that spell instant death if you miss them. Sure, the game reloads right back to give you another chance, but the timing is very aggressive, practically ensuring that you will miss them the first time around.

As with its spiritual predecessor Devil May Cry, death carries harsh penalties on your score at the end of the mission. I would estimate about 70% of my deaths in the game were attributed to those quick time events and the rest were to environmental hazards. Notably, Bayonetta 2 would go on to significantly reduce their presence in the game, suggesting that Platinum Games realised how annoying they were as well.

Overall, Bayonetta holds up very well, and manages the fine balance between being tough but fair. Rewarding carefully-timed dodges with free hits is an amazing mechanic that rewards learning enemy attack animations. This is why the QTEs felt so out of place, as they felt random, and rewarding trial and error over actual reflexes. They were pretty common back when the game first came out. This re-release shows how far we have come that we mostly don’t see this kind of QTE in modern games anymore.

It is worth mentioning that these versions of the games are the best they’ve ever been on console. On the PS4 Pro, both games look amazing at 4K resolution, with a very smooth 60FPS. Load times were practically nonexistent as well, ensuring I was back in the action in no time whenever I died. Particularly with both games’ emphasis on art direction and fast-paced action, this is absolutely the best way to experience them.

Platinum Games’ Bayonetta & Vanquish 10th Anniversary Bundle is amazingly good value. While you will probably get more bang for your buck with Bayonetta, both are fantastic action games that hold up very well today. Sure, some gameplay features and plot aspects have not aged all that well over the last decade. However, if you are even a passing fan of action games, this bundle is a great way to experience how the company started.