Bugsnax Review – You are what you eat

Curiosity about Bugsnax has been buzzing around ever since its launch trailer back in June. With a catchy as hell theme song and a really weird premise, it’s the sort of trailer that makes you feel like you have to know what it’s all about. Well, it’s finally time to talk about Bugsnax.

Bugsnax is the strangest game to come out all year. I say that with confidence – there is no other game quite as weirdly unique, intriguing, and cute yet vaguely unsettling as this little first-person adventure. On this basis alone, I recommend you play Bugsnax. Even if it’s not your thing, it’ll at least give you something to talk about. Without spoiling too much, it’s a game best played blind so you can experience every surprise as it happens.

Funnily enough, ‘catchy theme song and really weird premise’ is also a great descriptor for developer Young Horses’ previous title, Octodad: Dadliest Catch. And like the 2014 game, Bugsnax shares both its deft writing and story of surprising depth hidden behind its cutesy look.

You play as a journalist who has been invited to interview Lizbert Megafig, a Steve Irwin-inspired explorer who proclaims to have discovered a brand new species on the mysterious Snaktooth Island. These creatures are half bug and half snack, and according to the new inhabitants of the island, they’re delicious. As the unnamed journalist, your goal is to interview all the members of Lizbert’s expedition. But you arrive on the island to find the crew split up and Lizbert, along with her partner Eggabell Batternugget, missing. What follows is an adventure that’s part collectathon, part adventure, and part mystery. What is the secret behind the Bugsnax?

Your main objective throughout the game will be to encourage Lizbert’s crew to regroup at the town of Snaxburg, a settlement they founded before abruptly abandoning. To coax them back, you need to start catchin’ those Bugsnax! These delightful little creatures are designed after various foods and require you to learn their movement patterns and likes/dislikes for you to snatch them up. There are ones based on fruit, sweets, and even full meals, all with adorable googly eyes. The creativity behind some of these designs is honestly inspiring.

The comparison to Pokémon is obvious – gotta catch ’em all! – But there’s one big difference. You don’t train the Bugsnax you catch… you eat them.

More specifically, you give them to the members of Lizbert’s expedition to eat. The characters, called Grumpuses, all have an obsession with the Bugsnax, claiming them to be more delicious than anything. Each character has a set of sidequests you can perform for them, most of them requiring you to catch specific Bugsnax. Most are great fun, often finding creative ways to keep catching Bugsnax from becoming stale. They might have you explore an ancient ruin, or face off against a giant moth made of pizza. Others really are just fetch quests that can lose their lustre quickly. But a few bum quests aren’t too much of a bother when it means more chances to interact with the adorably funny Grumpus crew.

Featuring an all-star voice acting cast including Roger Craig Smith (Sonic the Hedgehog), Yuri Lowenthal (Marvel’s Spider-Man), and Cassandra Lee Morris (Persona 5), the Grumpuses all have distinct personalities without ever feeling over the top. They’re a bit one-note, but in that charming Sesame Street kind of way, and the dynamics between the characters kept me coming back to Snaxburg just to see how everyone was getting on. To make things better, this game has more LGBT+ representation than any game in recent memory, with 4 out of the 13 named characters being in a same-sex relationship. Some characters also use they/them pronouns. It is so encouraging to see in such a small, light-hearted production that could have so easily gotten away with doing less.

“…some Bugsnax are a little bit terrifying, most are adorable, and all of them are a delight.”

Eating Bugsnax will cause a part of a Grumpus’ body to change shape into something resembling the ‘snak, meaning you can customise each Grumpus in a variety of amusing ways. It’s great fun, but there is something undeniably creepy about the whole thing. The Bugsnax are eaten whole and still alive, which is justified in-universe but is nevertheless disconcerting. What quickly becomes clear, however, is that this is not a flaw but a feature. That sense of discomfort will fade as you play through the story, but it will never quite disappear – and the game doesn’t want it to.

Of the things most surprising of the game, the ending of this mystery narrative has quite an interesting twist. I will say no more here, but it was well worth persisting through some of the slower parts and clunky controls. 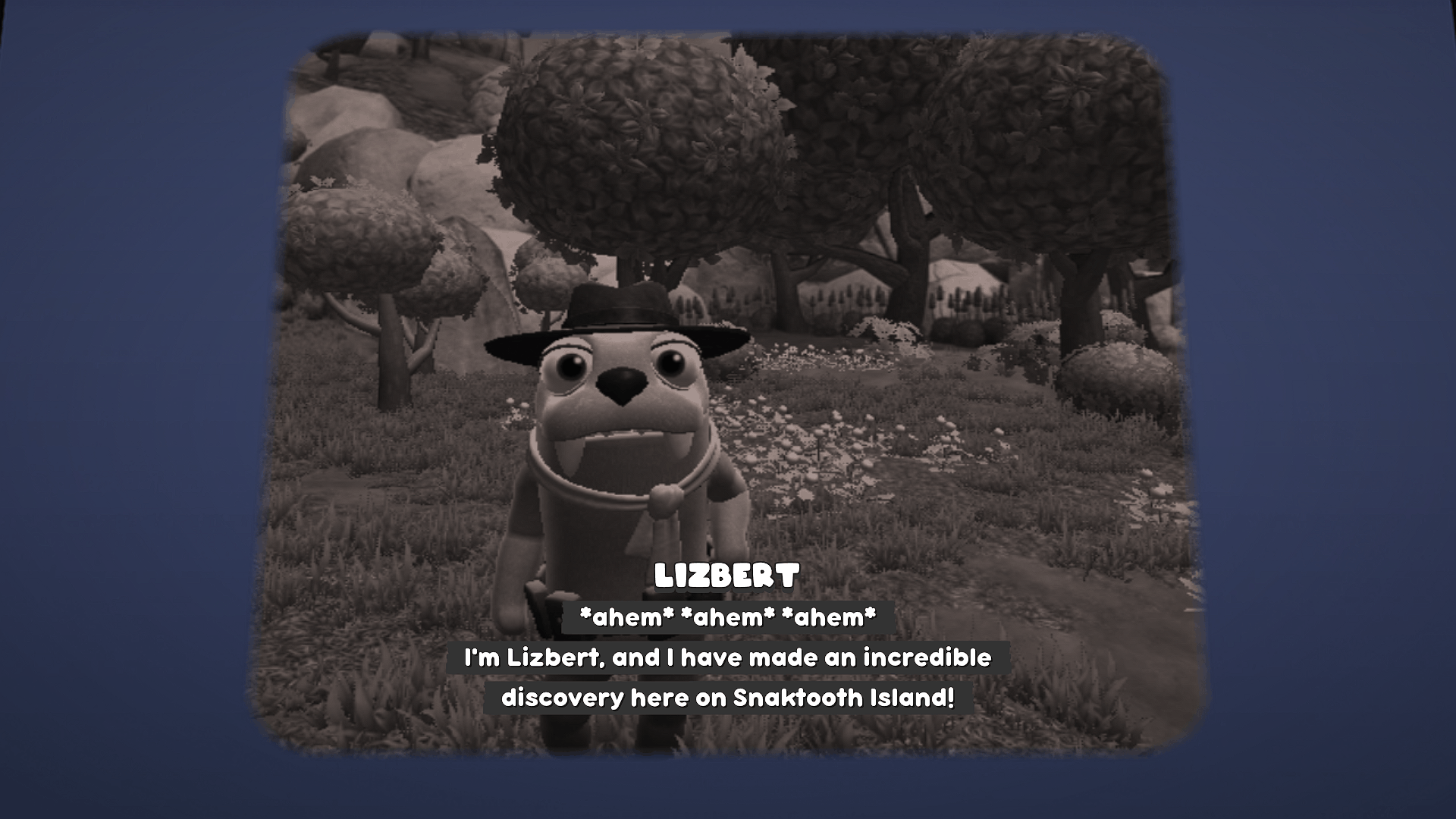 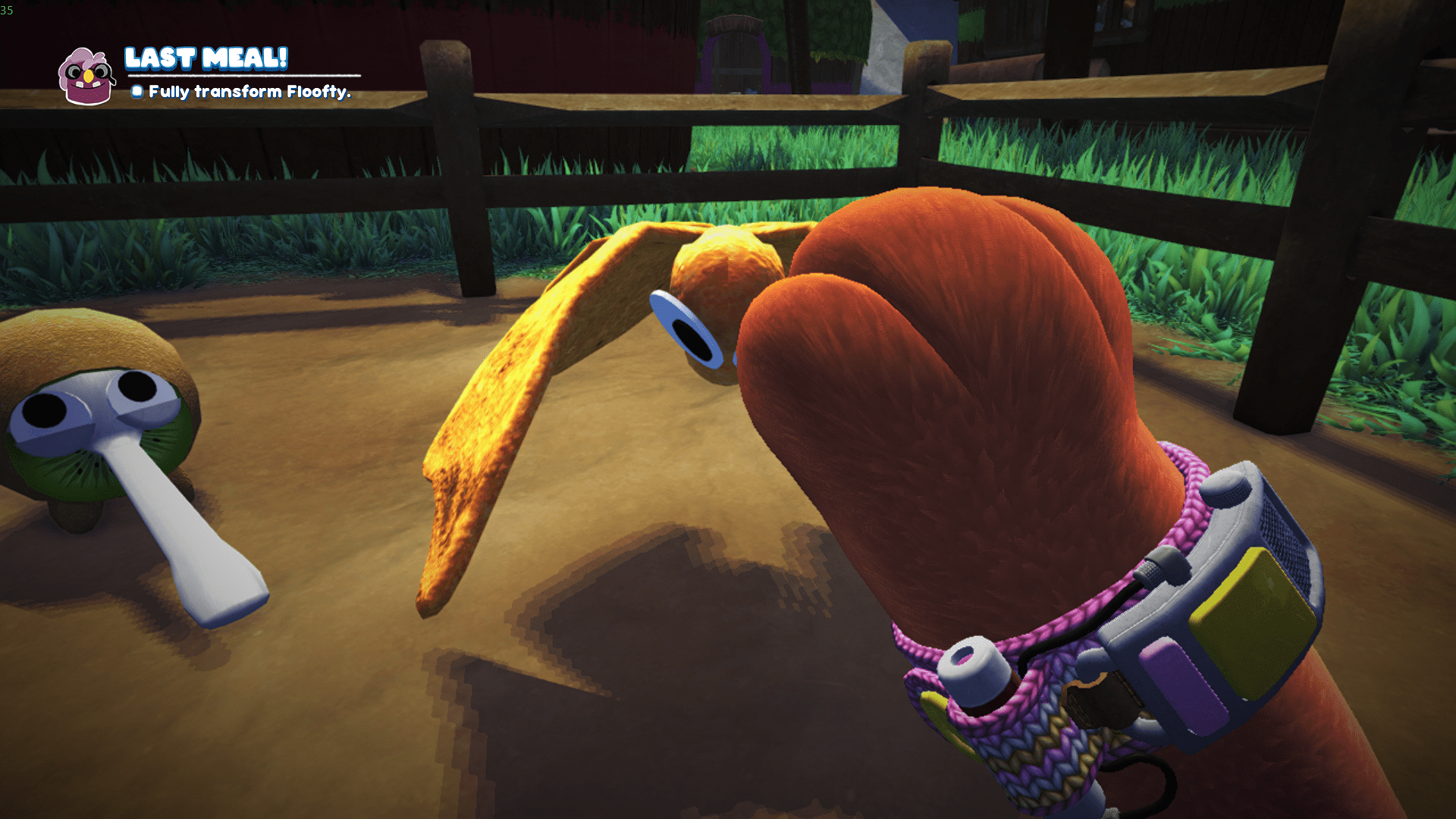 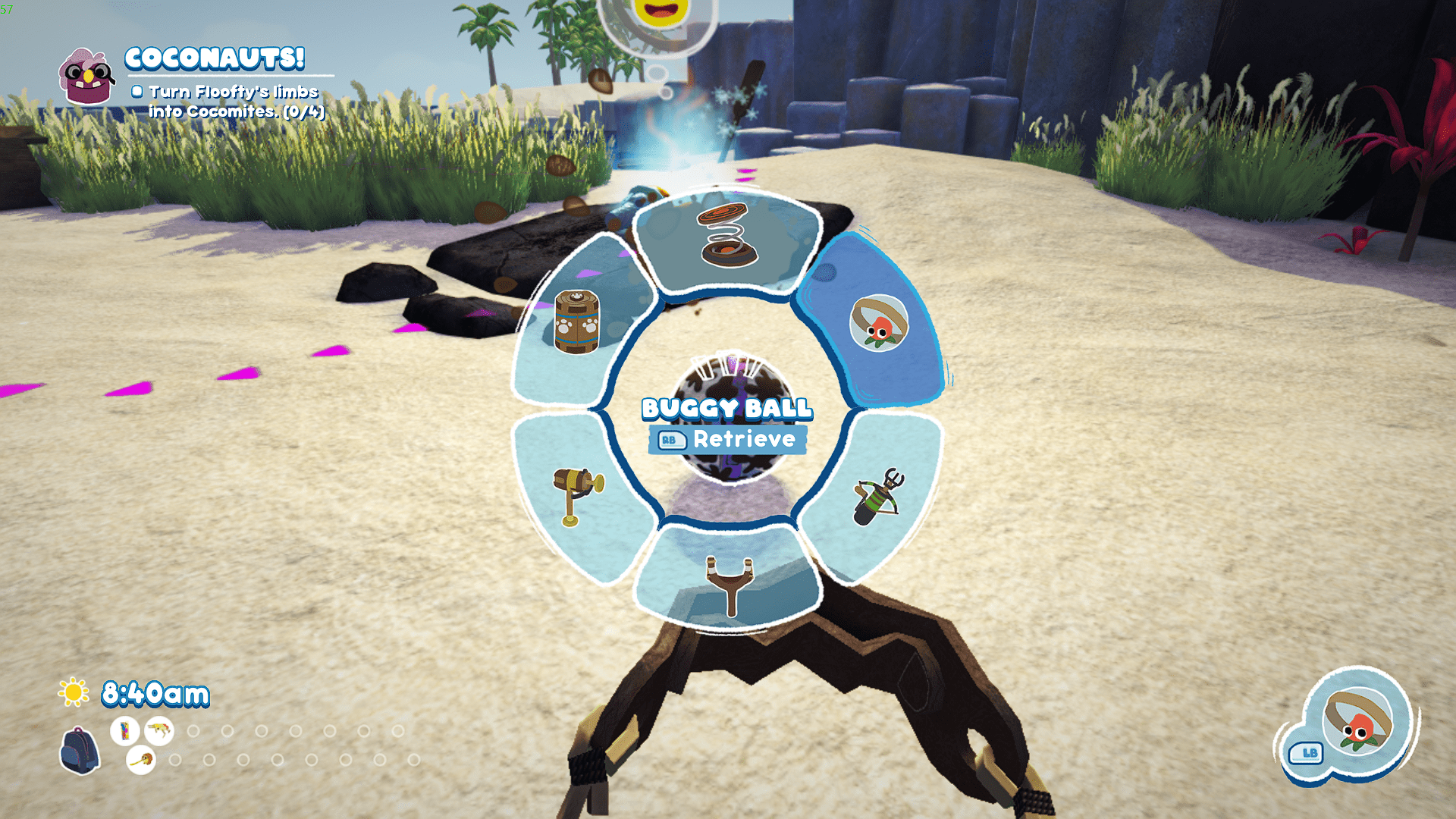 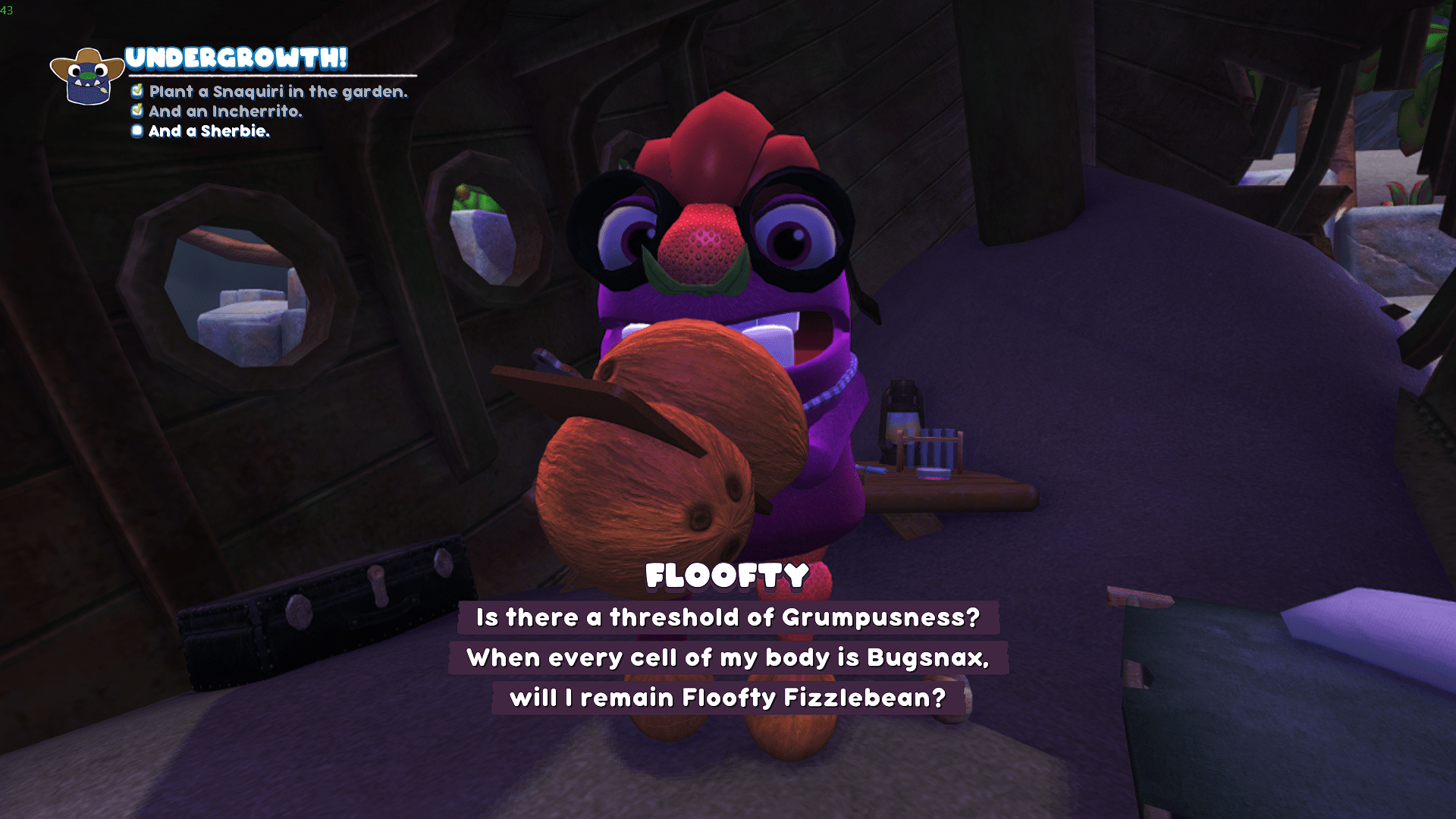 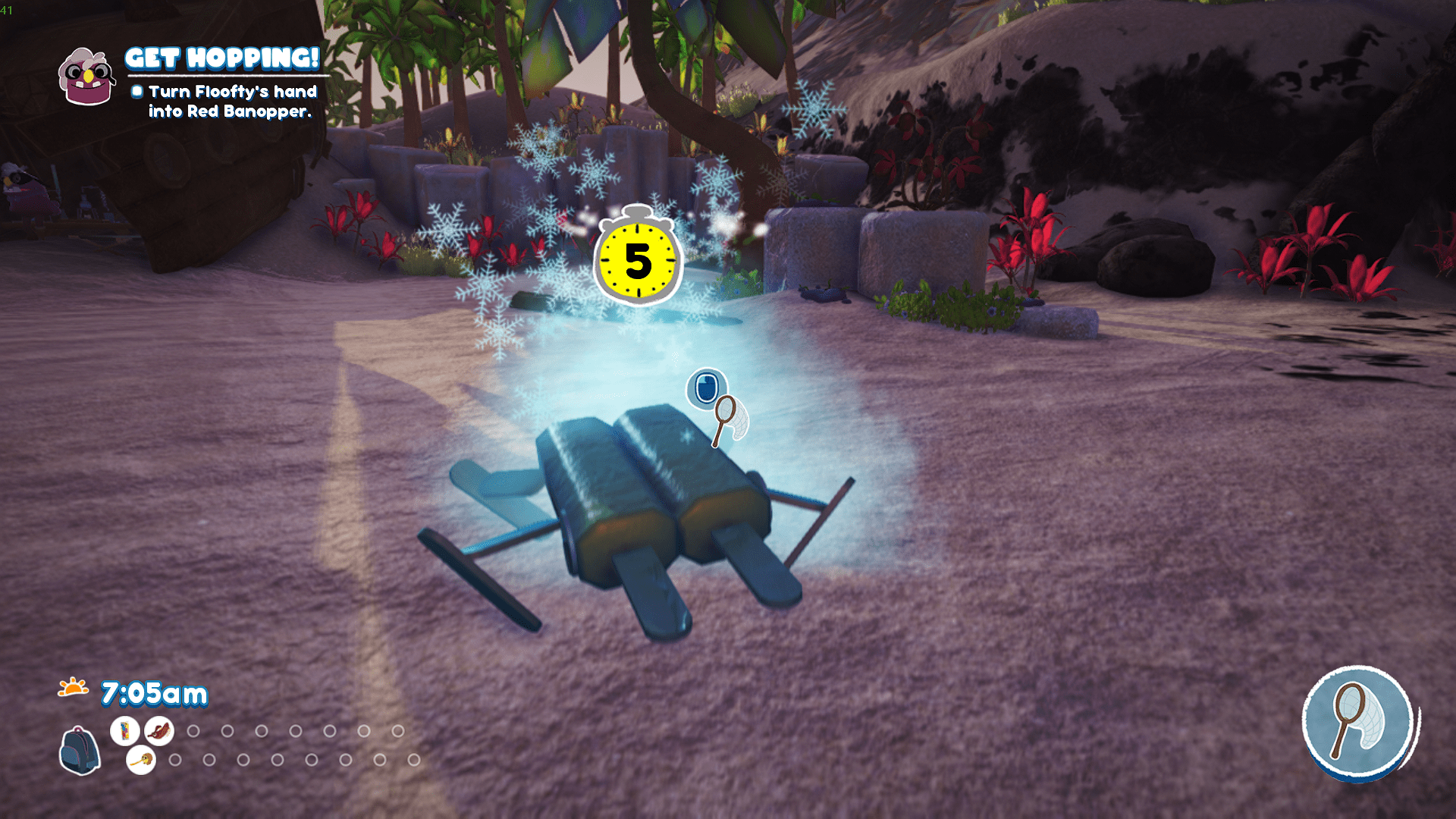 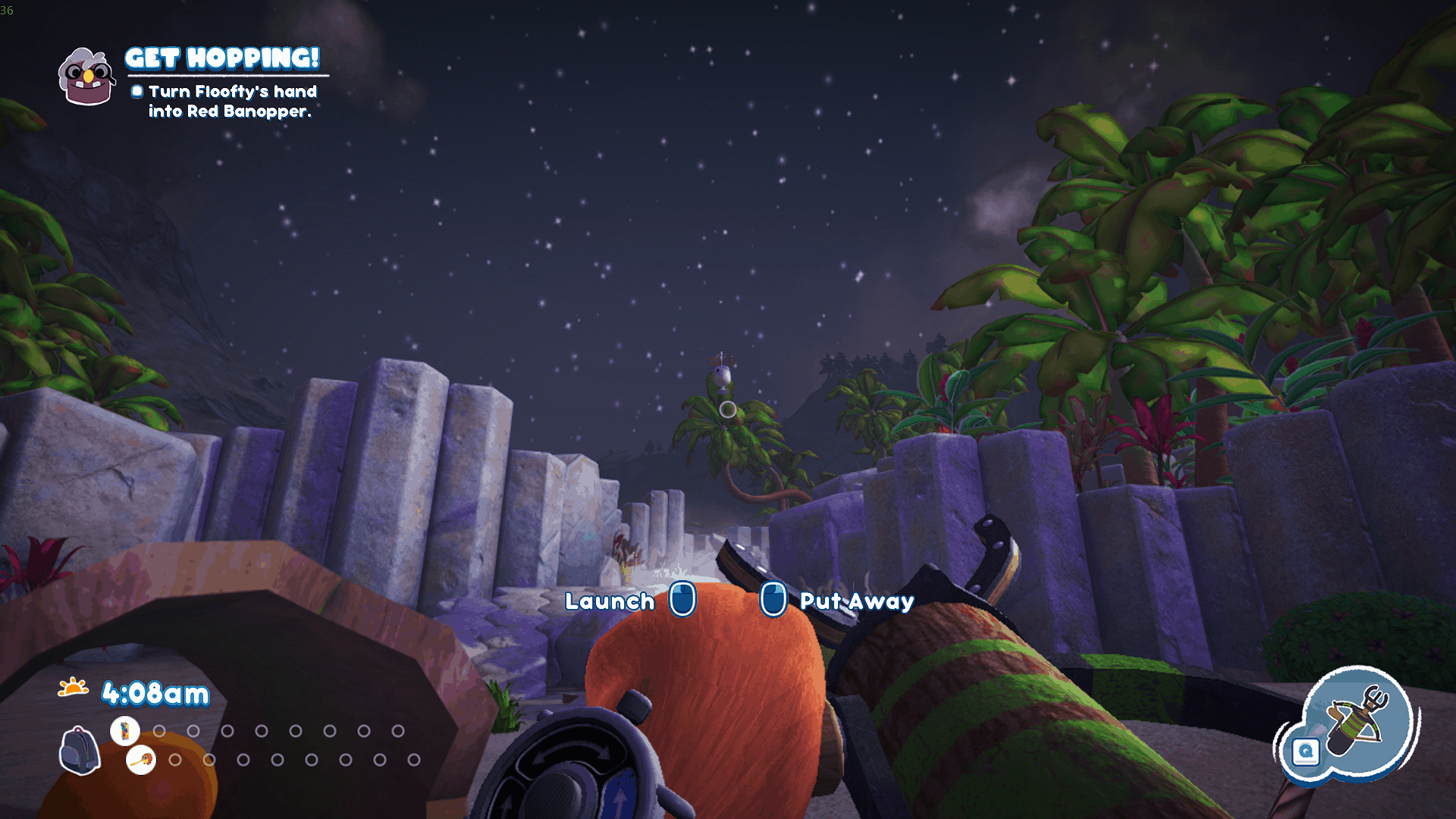 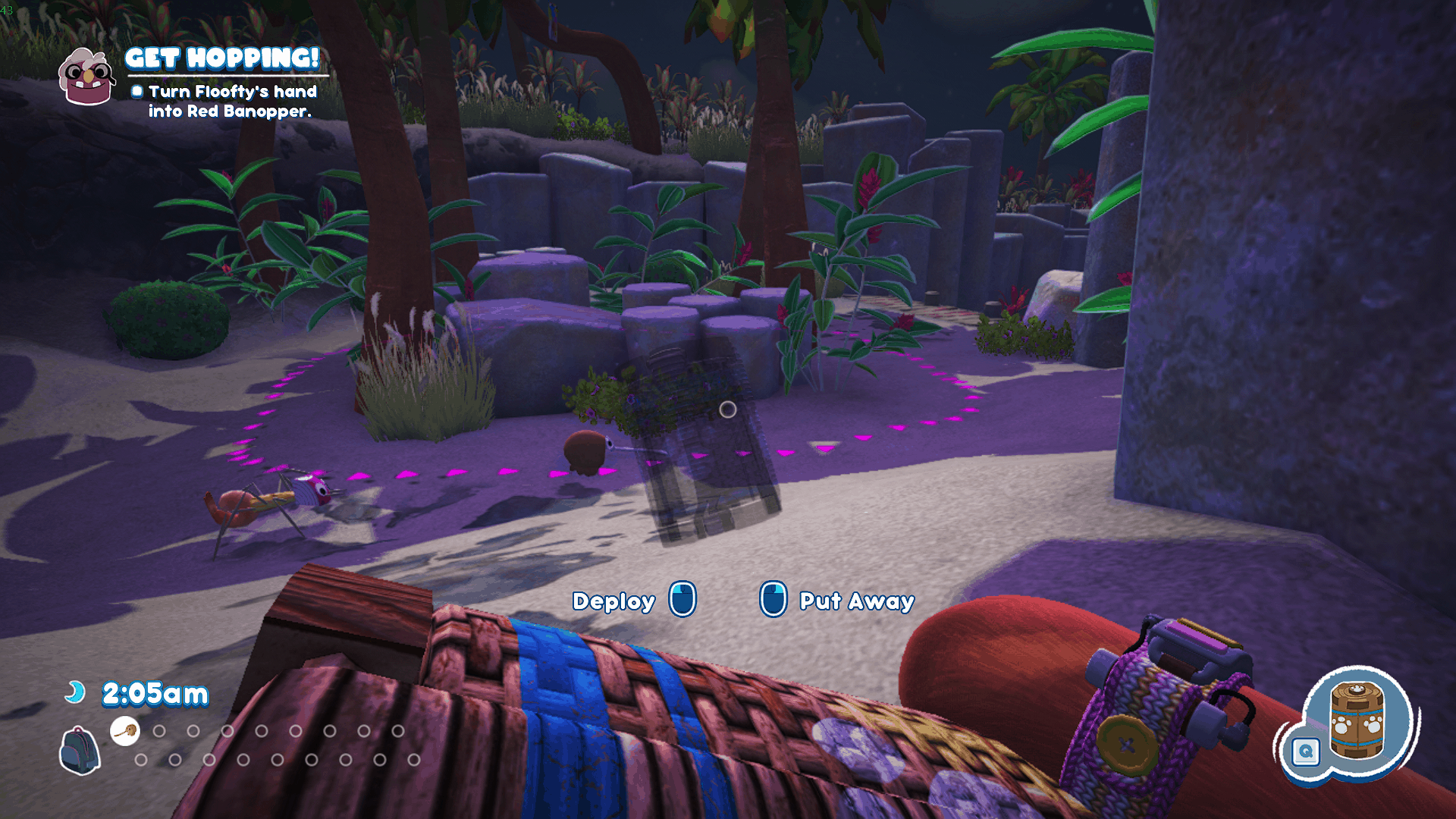 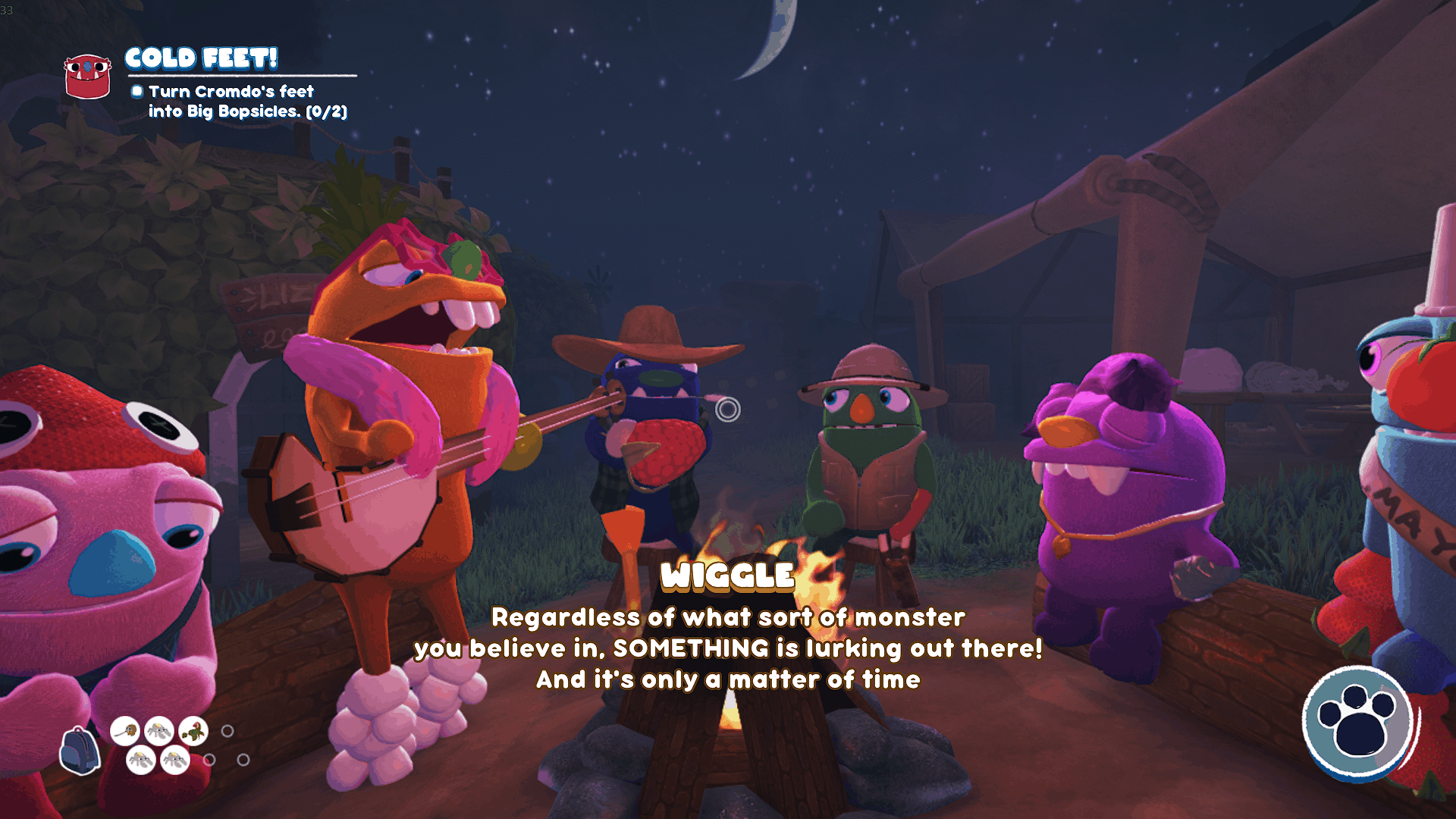 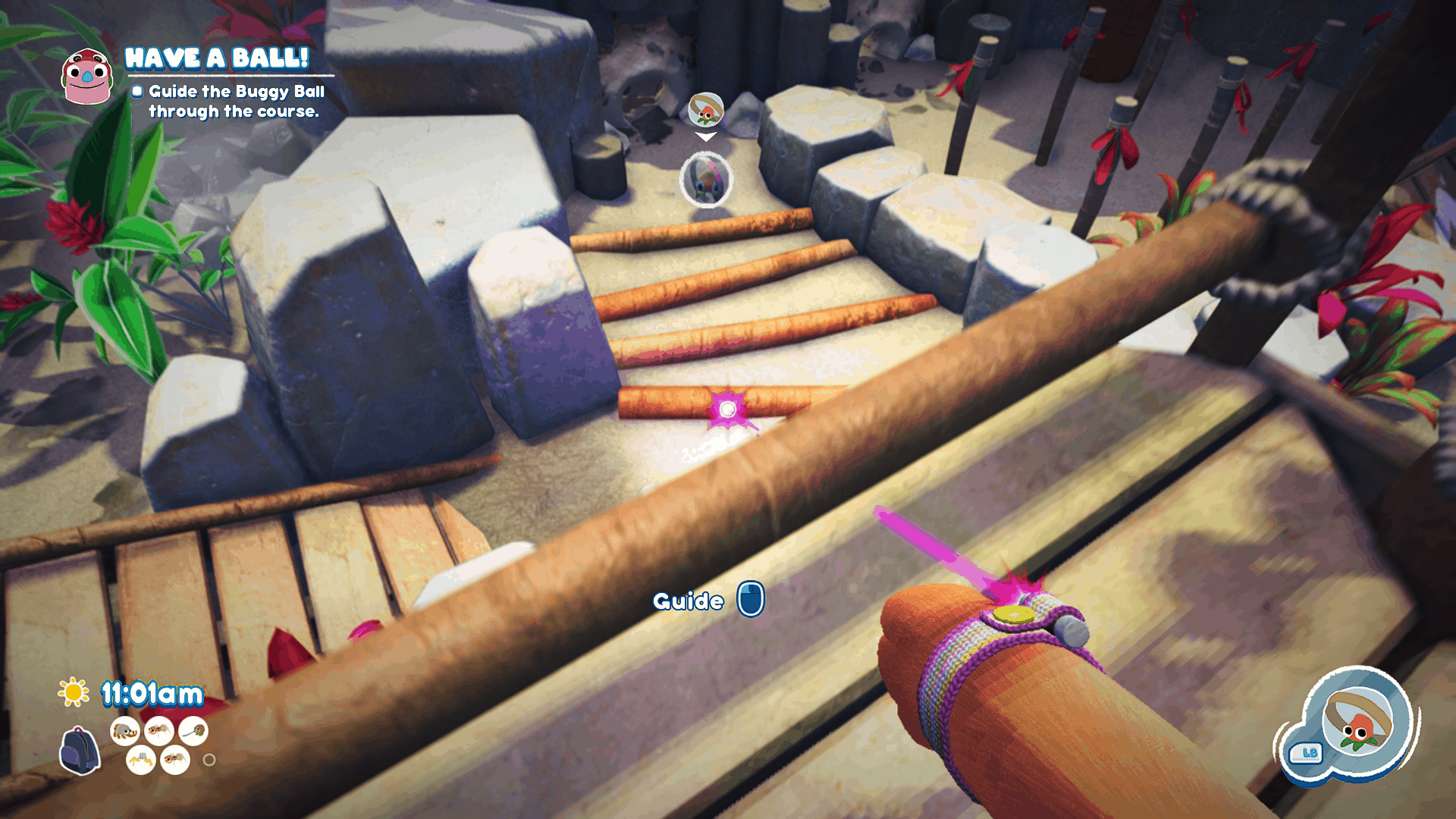 The game is separated into several areas, each one filled with different Bugsnax. It’s great fun to discover so many different designs: some are a little bit terrifying, most are adorable, and all of them are a delight. Where the game trips up is in the cumbersome way some of them must be caught.

With various traps in your ‘snak-catching arsenal, logic would dictate that there is more than one way of capturing most of them. Most of the time, this is true. But a little too often, I found the required methods for various Bugsnax to be needlessly finicky. In one example, I needed to shoot down a flying cheese poof using the Launchpad trap I’d just received. After half an hour of trying to shoot it down with rocks, I discovered that I had to launch another Bugsnak at it. Why did a burger with legs work where a large rock didn’t? I don’t know, but it was a needlessly frustrating waste of time.

There are some creative ways of using the different traps – you can launch them, trip them, lure them away, even set them on fire or douse them in water. But there is little guidance on how to make the best use of these tools, which means you’ll need to employ a bit of trial and error. A lot of the time, you’ll need to use two or more traps at once, and while you can swap between them quickly enough, it often felt imperfect as if I wasn’t playing the way the game intended. This feeling is doubled if you’re playing with a controller, where a lack of precise aiming and a generally unoptimised control scheme makes doing simple tasks a bit of a chore.

There were various small glitches to be found too, such as quest icons appearing at random, objects falling through walls, and dialogue not triggering. At one point, clipping into an area that shouldn’t yet have been accessible resulted in skipping a large portion of the game. This is unlikely to occur to most players, but such things are a possibility.

No matter how many times I get frustrated at the little things, I can never stay mad at Bugsnax. It’s got a perfect blend of exploration and narrative, with a story that climaxes in a surprising but satisfying way. It’s not exactly a Blockbuster title for the next generation of consoles, but it’s a delightful adventure with hidden depths. Due to the clunky controls while using a controller, my recommendation is for the PC version, but it’s a great time either way. I’ll be back to Snaktooth Island to catch more Bugsnax very soon.