New console generations are always exciting, and Godfall as a launch title is certainly an appealing prospect. An action-packed hack-and-slash combat-focused looter that looks completely stunning is appetising for sure, and I was one of many who were hooked in by the pretty gameplay footage, hoping for a strong experience with lots of depth to its co-op campaign and enticing endgame. Sadly, Godfall feels like one really solid idea fleshed out ad nauseum across repetitive looking environments, basic mission structures and a pretty shallow gameplay loop that wears out its welcome before the credits roll. It’s a stylish, fun ride while it lasts with satisfying combat, but there’s not enough content to sink your teeth into here to justify the egregious price-tag.

The ho-hum story certainly doesn’t start things off on the right foot in terms of piking your interest. You play as Orin, a fallen king, who must try to stop his brother Macros from becoming a god. The narrative takes itself very seriously, and often is fed to you via lore-dumps in the main hub or via voice-over while you’re hacking through enemy hordes with reckless abandon. Of course, story was never going to be a key focus of a loot-focused title like this one, but it’s worth noting how “meh” it is, largely skippable and uninteresting, as you take down each major boss before moving swiftly onto the next one.

It’s worth pointing out that Godfall is a gorgeous game to look at. The lighting and reflective surfaces bounce around and really do give the whole experience a shiny next-gen feeling. Three realms, Earth, Water and Air all look visually distinct from one another, with rich colour palates and interesting visual flourishes, but once you’ve seen one level in the realm, you’ve seen them all. They consist of labyrinthine pathways with staircases, bridges and circular platforms where combat takes place. You jump between them by pressing circle at specific moments to bounce from platform to platform, but at the end of the day you’re following around a moving objective marker until you reach your mission destination (a choice between kill the thing or press a button to activate the thing).

Apart from funneling through the main story with its range of mini-bosses and larger, more impressive boss-fights, you’ll be going on “hunts”, which basically means tracking down a mini-boss and killing it, with some bonus objectives based on the time it takes you or perhaps killing other enemies with specific moves. These hunts are fine enough, but again, having to repeat them to farm resources doesn’t offer anything in the way of variety, no matter how cool these powerful foes look walking towards your screen in slow-motion when you select them to take on. (I mean, they do look pretty cool).

The aforementioned larger bosses that cap off each realm really are a test, and probably some of the most fun I had in Godfall. They genuinely forced me to capitalise on all the combat skills I’d learned, as they use elements from their respective realms that prevented me from just blindly running in and attacking. Even the smaller bosses that you come across switch up their attacks and have different abilities too, I just wish there were more of them. With only 12 or so mini-bosses and six “proper” big bosses, fighting the same ones over and over again becomes less of a joy and more of a grind.

“…it doesn’t take long before you’ll be taking down groups of foes while looking and feeling like an absolute badass.”

Thankfully, combat itself is a treat. Utilising a combination of light attacks, strong attacks, blocking, parrying and dodging, it doesn’t take long before you’ll be taking down groups of foes while looking and feeling like an absolute badass. Godfall implements a couple of interesting systems that mean you can tackle enemies in different ways, too. The Soul Shatter system for example allows you to chip away at their health with light attacks, banking a larger strong attack which, if it’s the killing blow, causes your opponents to explode right in front of you, which is always a nice exclamation point on a hard-fought victory. On the flipside, slashing away with stronger attacks means you can open them up to a takedown finisher. Either way is extremely satisfying, but each enemy reacts differently depending on their weaknesses, so it’s not a one-size-fits-all approach.

Weak-points also flash up on enemies if you are able to parry them, and parrying itself can also open up smaller baddies to an instant kill. Enemies often attack in packs, and even spawn through portals at times, so they’re in large supply. Taking down a large group successfully (especially when chaining together several attacks and finishers) didn’t get old for me, even after completing the 12-ish hour campaign. There is also some variety with the different enemy types, with healers and other ranged enemies useful to take out first so that you can focus on the larger shielded brutes.

There are some strange design choices in Godfall that prevent combat from being as slick as it could be, however. You can’t easily shift from one locked-on target to another, and even then the locking-on doesn’t feel particularly useful given how many enemies are attacking you at once. You also get no indicator that you’re being attacked from something off-screen, which can be a frustrating end to a combo that feels cheap. There’s also a Polarity system that allows you to swap quickly between two different weapons mid-battle, and by doing so it will fully charge your secondary weapon to give it a temporary buff. This switching can be very useful in difficult battles when combined with the skills or specific perks of each individual weapon, making all loot picked up worth at least a look-in. Each of the various weapons feel genuinely different and all having their own style. The combos are basically the same, but there is of course a noticeable difference in pace when using a greatsword as opposed to using dual-blades, and so on.

I also really liked the idea of the different Valorplate’s, reminiscent of Warframe in terms of their styling. However, given they can all use the same weapons and enchantments they don’t feel as different as I was hoping. I’d often switch between them for aesthetic reasons rather than tactical ones. They all have a different special ability called an Archon Fury that can be triggered, and eventually I found one that summons ghost warriors to assist you in battle, which I found particularly useful when dividing and conquering some of the later-stage enemies. But ultimately it’s the weapons you choose to use that will have the most influence on your battles. It would have been cool to have a more diverse range of abilities for each Valorplate to really inspire testing them all out more. 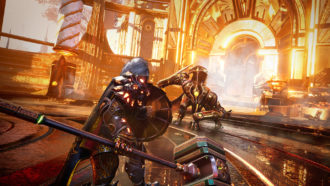 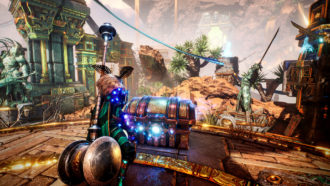 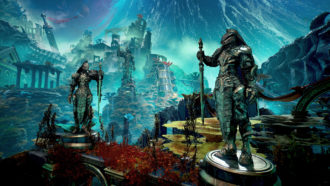 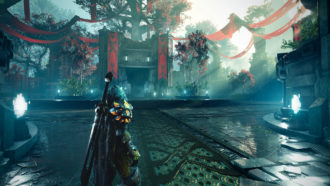 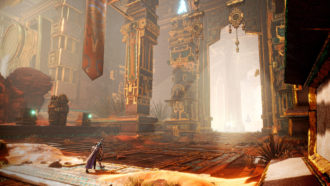 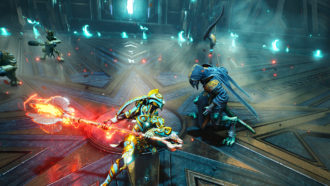 Unfortunately, despite the combat being a solid good time, missions don’t have a lot of variety, as they funnel you through each area to complete objectives. Again it reminded me of Warframe in that sense, but without the procedural generation. Apart from killing enemies, there are chests that can be unlocked with some very light puzzling components and you can find resources that allow you to unlock new Valorplates. Beyond that, you’ll just spend your time grinding for experience and additional loot. It’s all pretty unimaginative, and spending extra time after completing the relevant story mission was only fun the first couple of times before it became a drag and I realised Godfall would send be back to those same locations over and over again for other quests.

The repetitive nature of the game isn’t the only thing that will grate on you, however. The inventory management is cumbersome; you can’t get rid of gear on the same screen that you equip it, and it takes a second to load each item you look at meaning it’s not swift. It might not sound like much but when you’re cycling through loot at a rapid pace, it’s noticeable and annoying. The frame rate drops relatively frequently to the point of freezing for a quick second, even when doing basic things like picking up an item or killing an enemy. It’s very jarring, and that was while in “performance” mode. It also crashed on me a handful of times, throwing me back to the home screen, meaning I had to repeat entire levels (that I’d already had to repeat, because that’s what you do in the game). Another mission, an enemy I had to kill to complete it just didn’t spawn at all, and other times the AI got stuck on the environment and didn’t move, making for a super easy and boring kill.

I dabbled in some of the endgame, called “Dreamscapes”, which adds rogue-like elements of adding buffs randomly and sending you on your way to get more high-powered loot. But much like other games with endgames that lack in content, Godfall merely has you repeating the same missions you just completed in the campaign again and again, as you cross fingers for some better loot and chase the elusive level 50 cap. But given you’ve seen everything you’re going to see well before this point, I struggle to see the incentive to play the game that much once you’ve completed it. Sure, co-op can be a bit of fun hacking and slashing with some mates, but that doesn’t alleviate the games glaring issues with pace and monotony.

Godfall provides a tempting mix of gorgeous visuals and flashy, satisfying combat, but the positive vibes only last so long. It’s the perfect example of a game that shows its whole hand too early, and then offers very little incentive to continue once you see how shallow it all is. With missions that are incredibly repetitive, a forgettable story and some frustrating bugs and frame-rate problems that really don’t let you show off your shiny new PS5 in the style intended, the core gameplay loop presented just isn’t enough to quench your hack ‘n’ slash looter thirst for more than a few hours.

Worse, in Australia, it’s $114.95 for the base game on release day, which makes it one of the most expensive launch titles on either next-gen console, and even harder to justify the barebones content within. Despite its eye-catching appearance, Godfall will serve as a footnote in the history of the PS5 launch line-up. It might at least be a fun one to pick up on sale in a few months when the launch hype has died down – by then, they’ll have hopefully mixed in some more variety to make it worthwhile.