Watch Dogs: Legion has been on my “can’t-wait-for-this-to-come-out” list since it was announced at E3 back in 2019. The concept of recruiting every single person in the game – pretty much making NPCs obsolete within its world – blew my little mind. Talk about ambitious! Ubisoft was going to flip elements of the open-world genre on its head, do the hokey pokey and turn the whole idea of “random NPC on the streets” around and into a living, breathing recruitment agency.

The game begins with a mission that sees you play as a character that is chosen by the game. This is the only time this will occur throughout your entire time with Watch Dogs. It sets up the events that will lead to the Watch Dogs: Legion world that you will inhabit. The London division of the hacker group DedSec is set up by another group of hackers called Zero Day. They place a number of bombs around London and blame it on DedSec leading Londoners to hate the hacking vigilantes and giving them no other option but to disband.

After these attacks, the world of London has obviously changed and not for the better. The strong and corrupt have taken over, bringing brutality and surveillance to the streets. Security company Albion is using corrupt police power, an extensive drone presence and violence to keep Londoner’s under their thumb. Crime boss Mary Kelley has control of the underworld and has her fingers in some pretty nasty pies (organ harvesting anyone?) Then there’s Zero Day – who are they, what do they want and why did they frame DedSec in the first place?

To bring back London to the people and stop it from being one big corrupt, scary Orwellian nightmare, DedSec must reform, recruit the best and delve into some pretty scary corners of the city.

“Character development is null and void in Legion as you can literally play as anyone; so really, there’s no main protagonist.”

The game gets you into recruiting straight off the bat by offering you a selection of fifteen varied and amusing profiles to chose your “first operative” from. It was a hard task to pick between a 20-year-old goth/metal hybrid hacker guy, a 24-year-old pickpocket who’s been banned from the London zoo, and a 53-year-old cryptographer who looked a bit Karen-esque. After that, you’re thrown onto the streets of London and can get recruiting!

The first two Watch Dogs were very focused on their protagonists who players had a long time to get to know and embody. Legion doesn’t have this angle anymore. There’s no brooding Aiden Pearce from the original Watch Dogs or no hipster Marcus Holloway from Watch Dogs 2. Character development is null and void in Legion because you can literally play as anyone, so really, there’s no main protagonist. Instead of presenting a character’s personality and how the story impacts them, Legion focuses more on seeing characters as interchangeable depending on their skills. Have a mission that you know will be populated with drones? Select a drone expert to handle it. Need to be stealthy af? Get a hitman or a spy to sneak around and use their silencers.

However, not all characters are created equal. When you access a player’s skills and gadgets via their “profile” you will find that a number of them aren’t worth the effort to recruit. Yeah, these people won’t come willingly. They’ll want you to do them a favour that ranks anywhere from stealing a car from a bunch of thugs, to wiping their data history from an Albion facility. It is only then that they will join DedSec and be a character that you can play as.

DeadSec operatives all seem to have their own skills, style and distinct voice, but their speech is repetitive and you will hear their exact words spoken by other DedSec members. So if you’re hoping for each of the playable characters to be unique, I’ve got bad bad news for you. Characters are important due to their special skills and usefulness in battle rather than for their personalities. This is part of what makes the game’s open world fall a bit flat. Certain voices or lines of dialogue are highly repetitive, and you can see how in some ways, this “no NPCs” idea has its limitations.

The slight glitches in the game also make the world seem less sophisticated. Randoms on the street will start punching you for no reason, or you’ll be swimming and can’t climb out of the water, or a person will just randomly disappear in front of you. Tiny things, but they interrupt the flow and feel of the world.

Like every open world Ubisoft game, there is a lot of objectives, both big and small, scattered around the boroughs of London. “Tech Points” are located in tricky areas that involve using the world around you to obtain them. These points can then go towards levelling up your gadgets, weapons, hacks and upgrades. You can also obtain these by completing missions, though tracking them down on the map is the easiest/fastest way to accumulate a lot of them.

Complete three or so small missions within each borough for an area and it’ll become “defiant”, switching its allegiance to DedSec rewarding you with a “skilled operative”, and the map will uncover more tech point locations.

You can also play darts, kick up and hunt for collectibles throughout the boroughs. Therefore, hours upon hours can be spent literally hunting down Tech Points and completing minigames without touching the main missions at all.

When you do decide to throw yourself into missions, you’ll have not only your recruited team on your side by two main DedSec members that act like the Charlie to your DedSec angles.

The first is Sabine Brandt who is the last known survivor of the original London DedSec team. She calls team briefings and keeps you up to date with what is happening behind the scenes. Then there’s Bagley, a sophisticated Alexa type AI who is full of quips and tips. He’s a British AI and therefore is always up for a laugh and a cheeky “humans-are-so-silly” taunt.

Though these two are responsible for placing waypoints for you and setting up meetings, you are on your own when it comes to combat. Gone are the mobile phones from the previous Watch Dogs with a weapons/skill wheel taking its place. Each skill and weapon is unique to your recruit and cannot be interchangeable with other characters. Choosing the right operative is super important when tackling a mission.

Even more so if you choose to activate “permadeath” in the game’s load screen options. Yup, your character could say bye-bye forever! I just couldn’t bear to tick this option, but that didn’t mean that my characters were totally safe. If a recruit “dies” in a mission they are not deleted from the game, but they are either arrested or injured. That character is then locked out from play with a timer next to their operative profile.

To shorten their arrest or hospitalisation, the game prompts you to recruit a Barrister and a Paramedic. By having these two on board, the time for a character to heal/get out of the clink is halved. This added feature makes the game feel more realistic and really does make you value the special and distinct talents of your crew.

“Even though Ubisoft have reported that they’ve tried to change their infamous formula, the bare bones of the previous Watch Dogs can still be seen through Legion’s pale British skin.”

One of my favourite things about the Watch Dogs franchise is its gadgets. I’m happy to report that the spiderbot from Watch Dogs 2 has returned along with another type that comes armoured and armed. Drones are a massive part of the surveillance of Albion and come in a number of flavours. You can hack all of them once you have completely levelled up to use them to your advantage. The coolest new gadget, however, is the cargo drone. This massive flying robot lets you ride on top of it so you can reach extremely high vantage points. It’s not only a godsend when you can’t find a way to scale a building, but also exposes you to some pretty cool aerial shots of London.

The London of Watch Dogs: Legion is just stunning. It captures the grit, the life and the energy of the city well by using the right colours, littering Brit slang in the character’s speech and even including a number of famous British artists, such as Lily Allen, The Gorillaz and Fat Boy Slim, on its soundtrack. 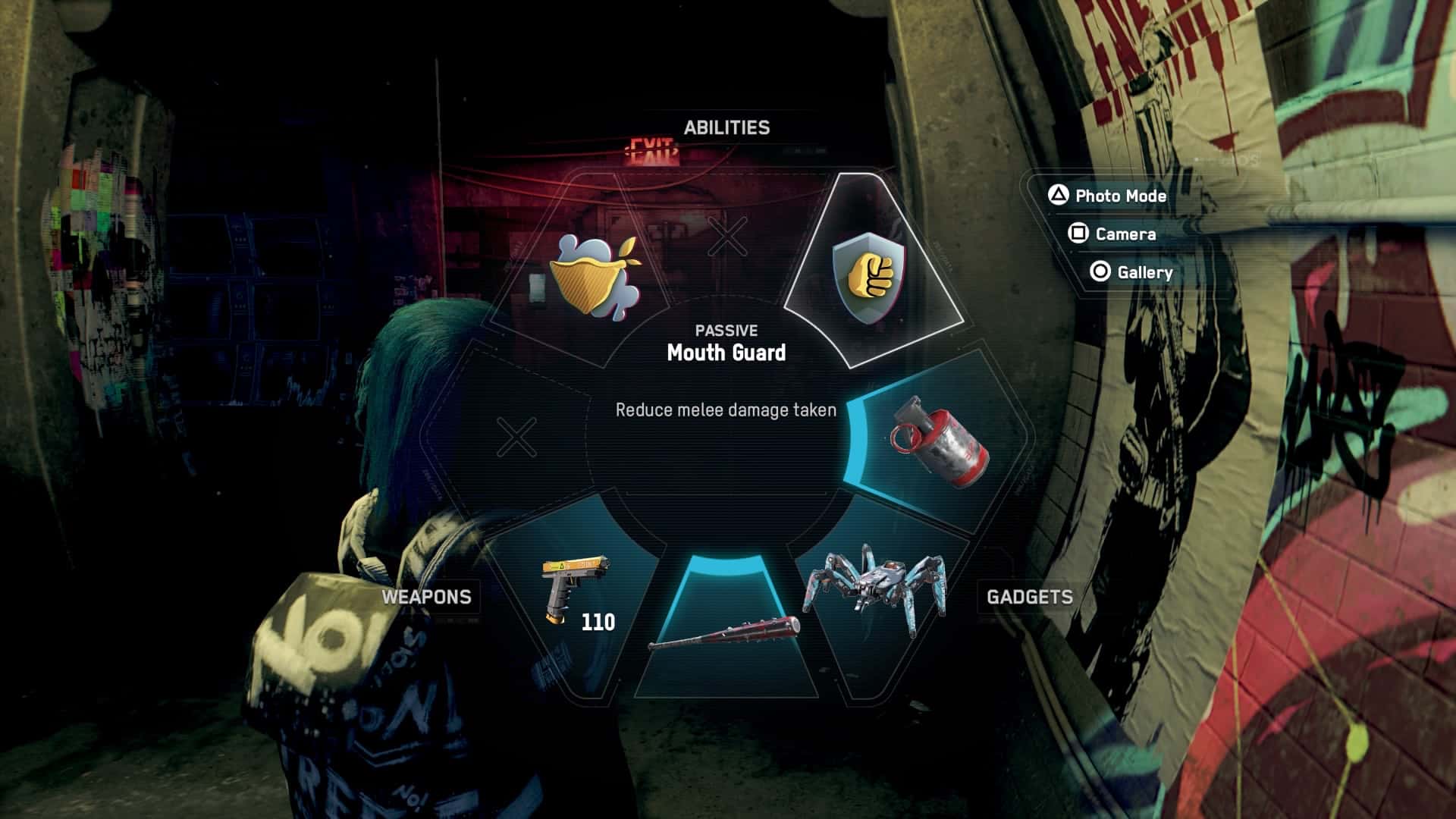 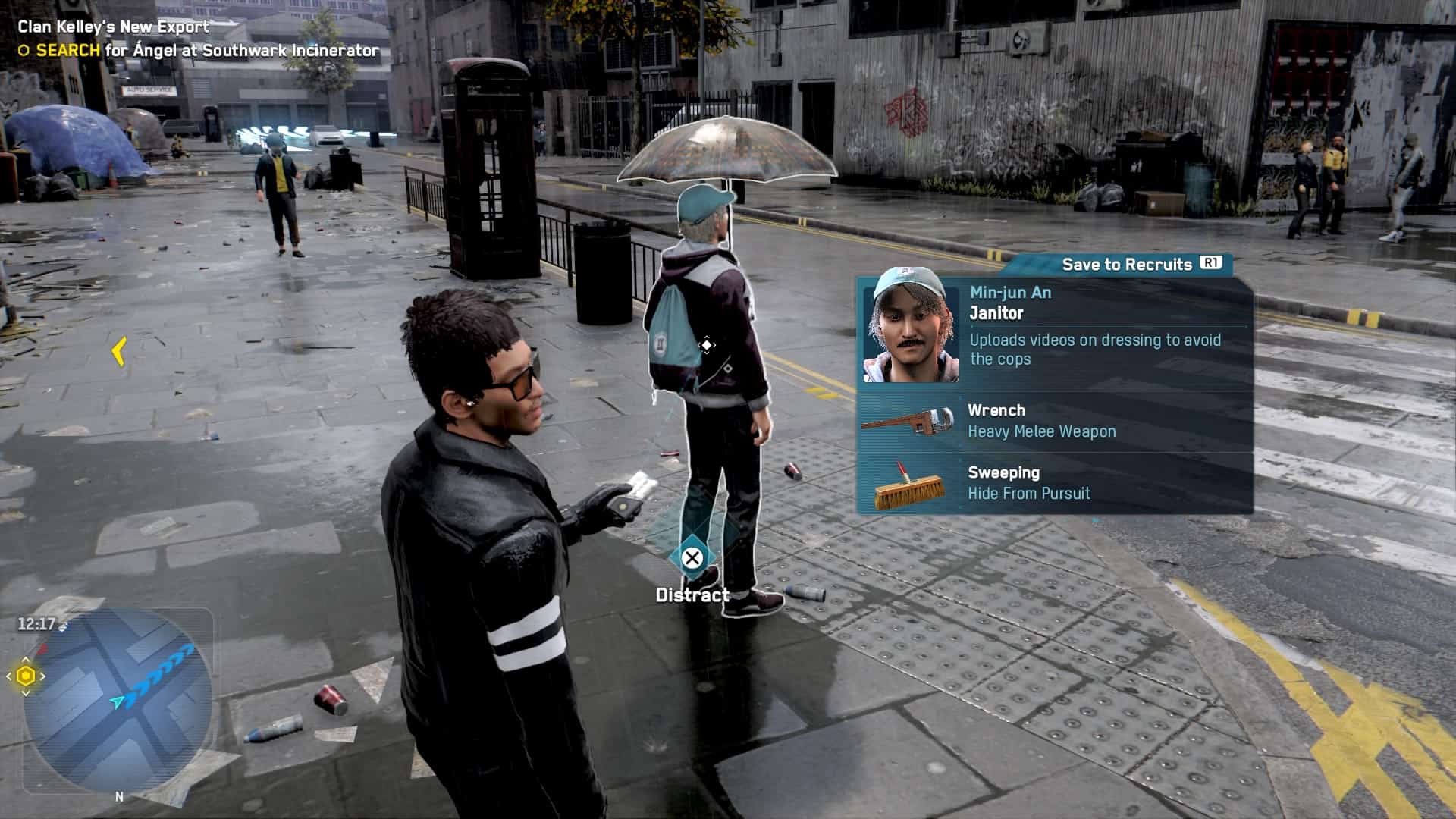 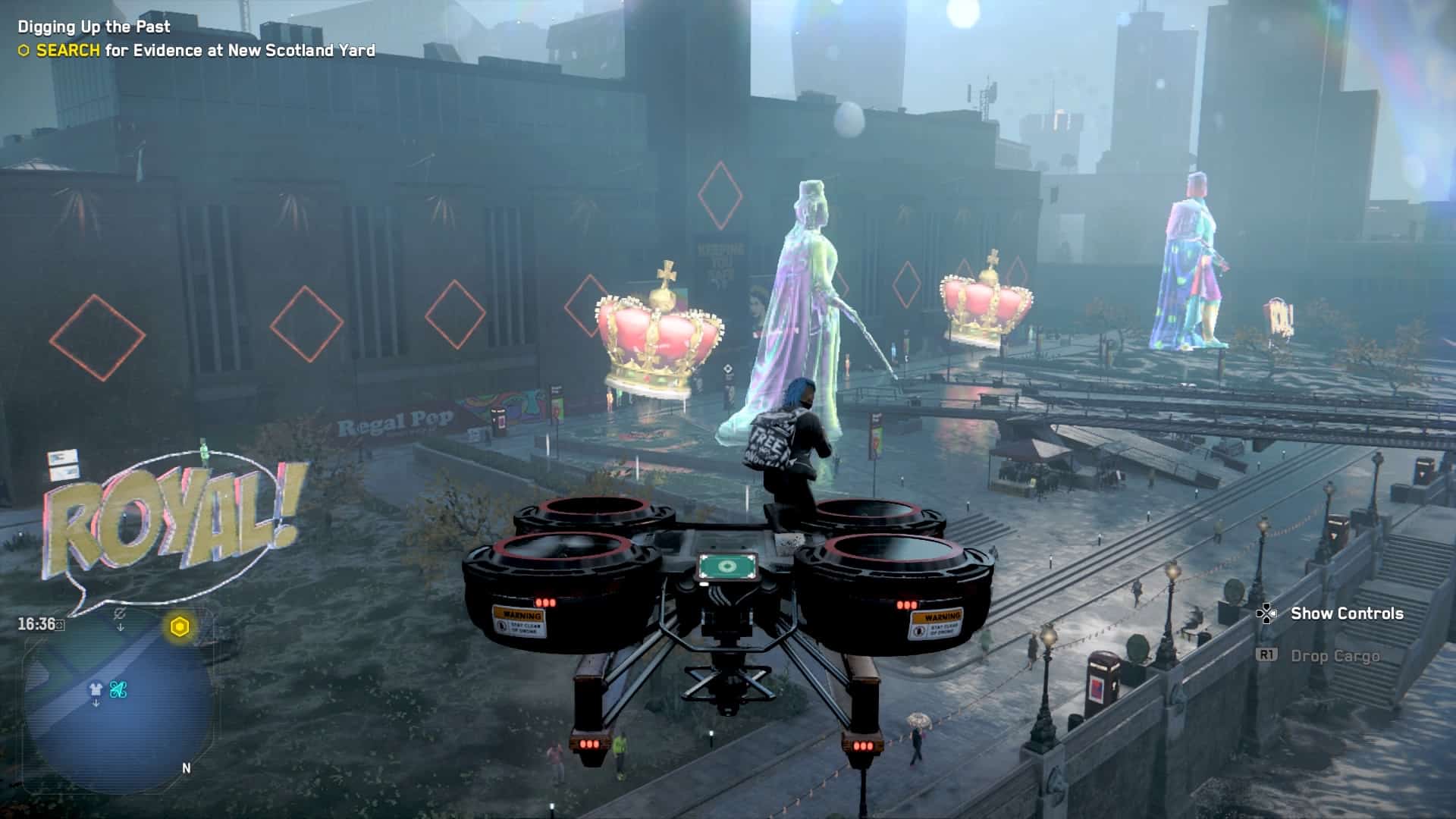 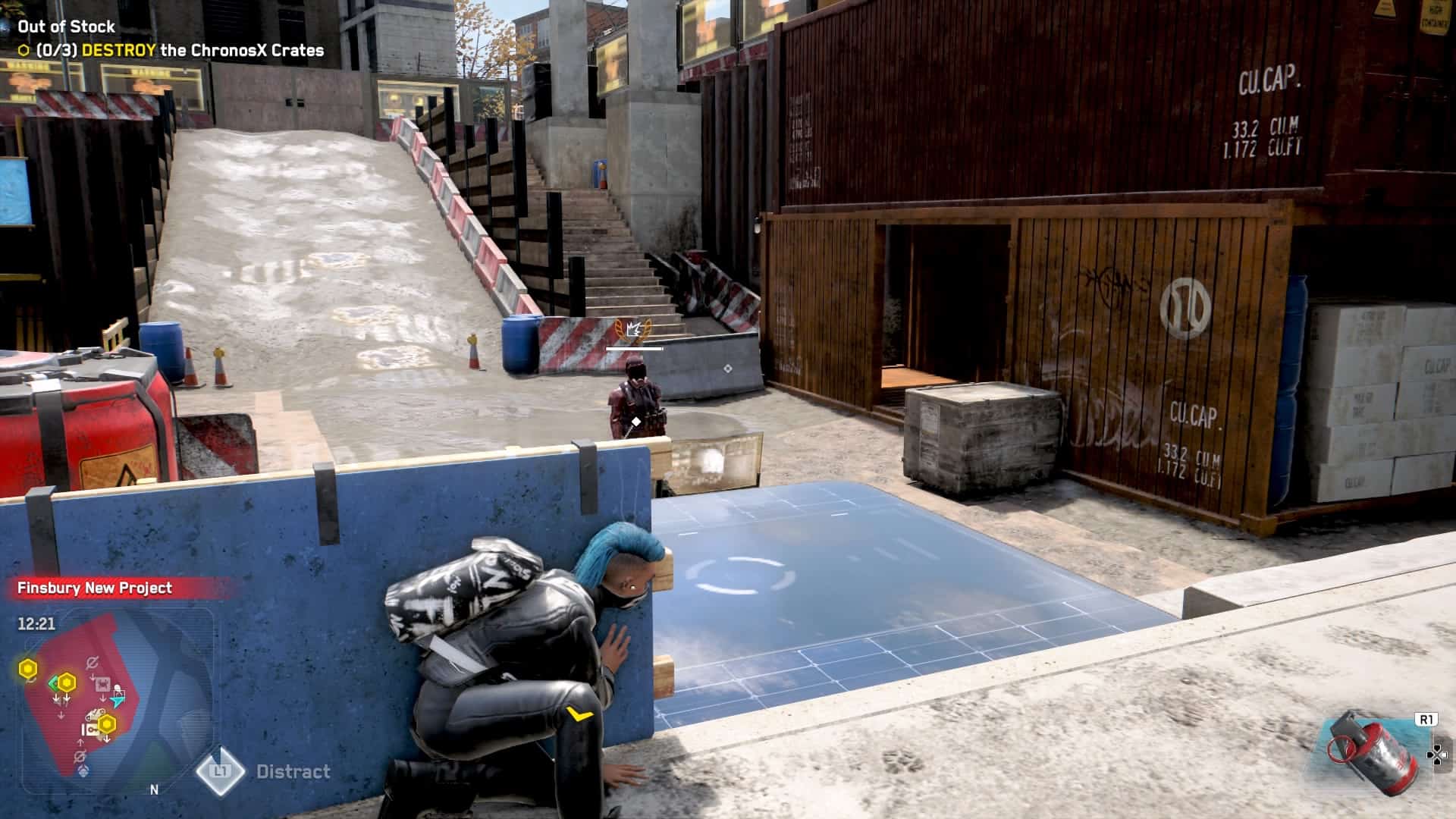 Moving the action of the Watch Dogs series to a European rather than a North American city totally changes the feel of the game. This may be because I’m an Aussie, but it felt more familiar, more colourful and not as dreary as the streets of Chicago. However, though the location has changed, the formula hasn’t. Even though Ubisoft has reported that they’ve tried to change their infamous formula, the bare bones of the previous Watch Dogs can still be seen through Legion’s pale British skin. So, if you’re a bit tired of the Ubi formula and were expecting Watch Dogs: Legion to be totally different then I’d stay away from this one. If you want a similar experience to the previous entries but with a slight twist, then I’d be grabbing up this fun dystopian open-world romp!

If COVID hadn’t hit the world, Legion might feel very different. Its world would feel like a fictional dystopian adventure that based skills over personality to gain back London from the hands of the corrupt. But the world of 2020 is a dystopian adventure in itself. Being a Victorian especially, I’ve seen how people need to work together in order to beat the enemy – COVID – so that we can go back to living a life void of so much fear.

Instead, Watch Dogs: Legion is about getting a bunch of pissed off “we’re not gonna take it anymore” people to hit back with their special abilities and give back to the people what is rightfully theirs. People coming together to fight a common evil? I can’t think of something that is more 2020 than that. That, along with the gadgets, the mayhem and the combat, is why Watch Dogs: Legion is not only a fun ride but so relevant in this COVID world we now find ourselves in.