YesterMorrow Review – Jump back in time

A peaceful forest village marks the beginning point for YesterMorrow, as its inhabitants prepare for a grand festival. This celebration honours the eternal victory of Light over Dark – which makes it all the more dramatic when dastardly shadows attack the village, tearing the tranquil world into a desolate hellscape!

YesterMorrow is a platformer adventure title from Slovakian developers Bitmap Galaxy and published by Blowfish Studios (Projection: First Light, Infinite: Beyond the Mind). With a focus on tight platforming over combat and a story that travels through time, this title draws comparisons to games such as indie darling Celeste.

“Clever use of lighting lends variety and depth to the visuals”

You play as a girl named Yui, who is tasked with reuniting her family and piecing together the shattered remains of her world after her village is attacked by Shadows. Yui is helped in her quest by ancient guardians, giving her the power to harness sacred Everlight and travel back in time to before the Shadows attacked. She must travel the worlds of the past and the present, purifying the land of Shadows and rectifying her forebears’ lack of foresight.

Right from the start it’s clear that this is a visually stunning game. The characters and enemies are animated with simple charm, the environments are dripping with gorgeous particle effects, and the colour palette creates a remarkably nostalgic aesthetic. Clever use of lighting and a dynamic day-night cycle lend variety and depth to the visuals. Enemies are stylised and intimidating, with the corrupted Shadow variants sporting a terrifying purple aura. The soundtrack is also a highlight, with the “past” world taking on a zen, hopeful soundscape while brilliantly doomed tracks accompany future-Yui’s journeys – the music also helpfully kicks into dramatic overdrive whenever a dangerous enemy is close.

Throughout YesterMorrow’s world, you’ll explore different islands with overworld and “dungeon” sections full of collectibles such as heart pieces, keepsakes, and cute animals (yes, you can pet the dogs). Each dungeon is made up of a series of platforming challenges with light puzzle elements. You use Yui’s Everlight powers to dodge enemies, bomb switches, and clear obstacles – it’s basically the Zelda formula, and it’s well-executed. You’re usually also stalked by the dungeon’s boss which are various giant creatures corrupted by Shadows – these bosses are brilliantly designed and memorable, with a highlight being a dragon that chases you intermittently through sections of the dungeon. The final confrontation with each boss is a unique and frantic puzzle battle, where you’ll need to time switch presses, dashes, or bomb throws to banish the Shadows. Occasionally, you’ll come across special statues in the world that let you travel through time. When Yui is a child she can’t jump as high, but the enemies are less powerful and the world is not yet destroyed. Occasionally you’ll need to activate a switch in the past for it to have an effect in the future, but much like the day-night cycle, this mechanic remains largely only relevant to the story.

Unfortunately, while YesterMorrow is a well-designed experience, some of its implementation is a little rough around the edges. The controls are mostly solid, but you never get that feeling of weight and precision so vital to the gamefeel of a platformer. Both child and adult Yui feel floaty and occasionally a little cumbersome, with maneuvers like wall-jumps sometimes feeling like I was leaving them to chance. This is a pretty big issue for a game based around player agility, and although the unlockable dash and double-jump help mitigate some of the movement issues, it wasn’t enough to consistently achieve the precision required in some of the later boss battles. I found myself getting frustrated and (dare I say) tilted upon dying again and again because Yui wasn’t moving like I wanted her to. This definitely wasn’t helped by the short but unskippable cutscenes that repeat upon each subsequent boss attempt.

There’s also quite a strange approach to difficulty in YesterMorrow – the aforementioned boss fights are intense and tricky, but the platforming in the dungeons leading to them tends to be incredibly forgiving. Checkpoints that replenish your health are placed everywhere. Even without going out of your way to collect heart pieces you’ll find that you can simply damage-boost your way through a lot of the obstacles and heal at the next checkpoint. I would have preferred some options to fiddle with the difficulty outside of restricting heart piece collection. 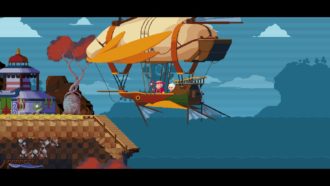 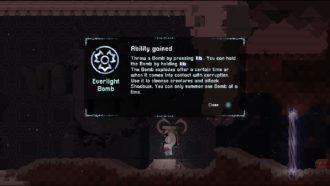 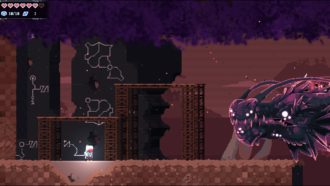 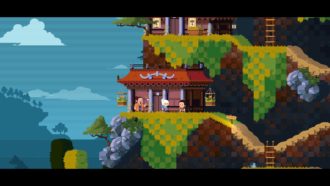 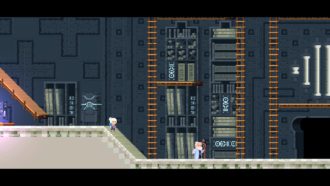 Playing through the title on PC, I encountered a few framerate issues and glitches. The screen froze entirely a couple of times, forcing a quit to desktop. There were also a few UI bugs, such as tutorial prompts appearing for abilities that were not yet unlocked. These are the kinds of things you can expect to be fixed in a patch later on, but it’s important to note for anyone keen on a glitch-free experience.

It’s a shame that YesterMorrow’s biggest distinguishing gameplay features are so under-utilised. The time-travel mechanic, while not wholly original, could have been explored in a much more dynamic or cerebral way. And to be honest, I didn’t even realise that the day-night cycle was supposed to have an impact on gameplay until I read a press release from Blowfish claiming that “dangerous shadows and creatures” are meant to appear after dark. Everything else that YesterMorrow has to offer is done solidly – the story is fine, the platforming is mostly good – but much of it has been done before, and often better. Still, a solid platforming experience with a stunning visual aesthetic is a decent way to spend a few afternoons.

YesterMorrow pulls together a solid foundation of mechanics collated from other platformer and adventure titles and morphs them into a decent, challenging game. However, it finds itself lacking in identity. From its relatively insignificant main time-travel gimmick to its almost-right controls, there’s not a whole lot going on that we haven’t seen before in a more polished fashion. If you’re itching for some hardcore platforming action and can look past its flaws, you’ll find a rough gem in YesterMorrow’s visually stunning world – just don’t go in expecting another Celeste.