Empire of Sin is a tactical strategy game developed by Romero Games and published by Paradox. It’s set in the Prohibition Era in Chicago. You play as a crime boss in the city of Chicago, where you’ll need to fight other bosses, bribe the police, and manage your empire’s speakeasies, breweries, casinos, and brothels.

The aim of Empire of Sin is simple: playing as the head mobster of your own crime gang in Chicago, it’s up to you to expand your empire and take out your competition so you’re the last one standing. There are thirteen different bosses to play as in Empire of Sin; each one is allied to a specific faction, and each one comes with different a diplomacy, empire, and combat bonus. While some bosses are able to run certain types of businesses at a cheaper rate, for example, others have a lower chance of having their businesses raided by the police.

While you start the game with one business, known as a ‘racket’, and one brewery, you’ll need to expand your range of businesses as much as you can. Rackets can either take the form of speakeasies, brothels, casinos, or hotels, and all generate different kinds of bonuses. A successful hotel, for example, will attract more customers to your nearby speakeasies and casinos, while casinos can turn a higher profit but also have a higher chance of making a loss.

“…the way in which Empire of Sin combines elements from several different genres is certainly very ambitious.”

To expand your empire with extra rackets, you’ve got two choices: either take a racket from faction-less thugs occupying a derelict building or attack an enemy boss’s business and take their racket for yourself. In both cases, you’ll have to assemble a party and win the racket through a turn-based battle, with combat mechanics reminiscent of XCOM or Wasteland. While battles against thugs are relatively straightforward, battles with enemy gangs are more challenging. If you’re at the point where you’re ready to take another boss out, you’ll enter a dedicated boss battle. To be victorious in these challenging fights, you’ll need a solid squad that can take more than a few punches. This is where hiring gangsters comes in.

The gangster and crew system is one of the things I most enjoy about Empire of Sin. Through a dedicated menu screen, you’re able to hire gangsters for your crew. Each one has unique skills and personality traits as well as a unique backstory, and often they have pre-existing relationships with other hireable gangsters. One gangster might be in love with another one, another might see a certain gangster as their nemesis, and another one might get on with a range of different gangsters. You’ll have to take these things into account when assembling your party, and if you end up with a gangster who is in love with a crew member on the other side of the battlefield, it will affect their performance in combat.

An empire of found family

As you progress through the game, several gangsters in your party can also approach you with personal missions and requests or make their own independent decisions in the middle of combat. During my first playthrough, I had one of my crew members ask me to track down an old lover of hers so she could get revenge. Another character had a reputation for getting spooked in combat, and as a result, ran out on me in the middle of a boss battle. Your crew members also get nicknames depending on the choices you make for them; if you kill a lot of enemies with one crew member, they might get a reputation for being a good shot with an accompanying nickname. If they manage to not get hit multiple times during an attack, they might get the nickname ‘Lucky’. The boss characters you can play as all have a unique story mission as well, which you can explore at your own pace during a playthrough. 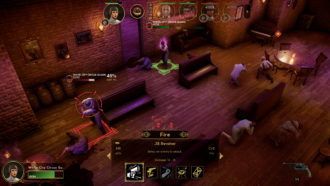 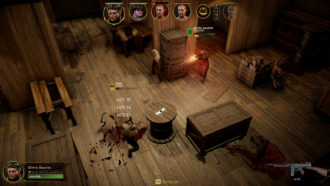 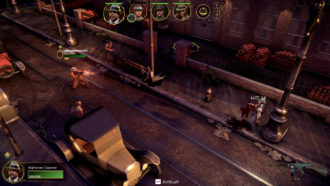 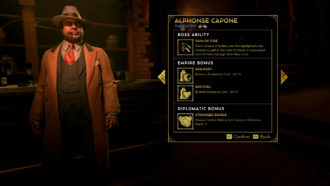 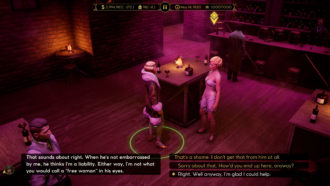 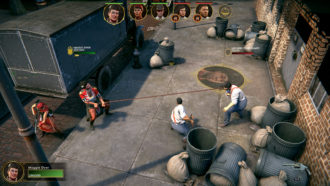 If you are unable to take over an enemy boss’ empire purely with a powerful crew, you can also invite other bosses to have a sitdown. These sitdown scenes usually play out in a Godfather-style cutscene, where you’ll have the opportunity to make deals with enemy bosses, form alliances, and more. However, you’ll need to be careful too: each enemy boss has their own personal quirks, and if you offend them, you might find yourself in the heat of battle pretty quickly.

Gameplay-wise, the way in which Empire of Sin combines elements from several different genres is certainly very ambitious. After a while though, it became hard to focus on what was most important, and it felt like several features in the game were constantly competing for my attention. As a result, the game often felt crowded and directionless, and I found it hard to prioritise or understand what to do next.

Some elements in the game could have benefitted from some fine-tuning; more than a few times I randomly got an alert saying that my standing with a certain faction had decreased, even though I was just walking down the street. Other times, I found some of my businesses making a loss, yet the menu screens for rackets looked so busy and overwhelming that I wasn’t sure what to change in order to fix it. At times the enemy AI decisions felt arbitrary, which made it hard to develop a strategy against AI enemy factions. In this sense, one of Empire of Sin’s biggest drawcards is also one of its biggest weaknesses. It feels like the developers were keen to cram a lot of different gameplay elements in, but all these different factors don’t always work together smoothly. Instead, the game is often overly complicated and opaque.

That said, Empire of Sin did capture my attention easily, and for strategy gamers willing to persevere, there’ll be plenty in Empire of Sin to Love. The game offers some truly enjoyable combat mechanics and story elements, and combined with a great soundtrack, stellar characters, and beautiful art, the result will make you feel like a true 1920s badass.

The way Empire of Sin combines diplomacy, turn-based combat, and narrative gameplay mechanics is incredibly ambitious. While there’s plenty to keep you engaged, the format doesn’t always work, and sometimes it’s easy to be overwhelmed by the sheer volume of stats and missions.

Even though the game has its shortcomings, its atmosphere, characters, and environment are fantastic. And if you decide to persevere, there’s plenty to love in Empire of Sin.