Pull on some gloves and jump in the ring! It’s time to fight the pandemic-induced muscle atrophy of 2020 right from the comfort of your very own COVID cave. Grab your Joy-Cons, a water bottle, and a sweat towel, and let’s get FIT with Fitness Boxing 2: Rhythm & Exercise!

Continuing on from the original Fitness Boxing which launched back in 2019 on Switch, the sequel brings a fresh coat of paint, a roster of new songs to duck and weave to, and a heap of cardio-heavy punching goodness. Having never played the original, I jumped right into Fitness Boxing 2 with zero boxing experience and a body degraded from months of lockdown. Are my aching, inflamed muscles worth it? Let’s find out.

The core offering of Fitness Boxing 2 is, unsurprisingly, boxing. You can either allow the game to create a Daily Workout routine for you, or you can pick and choose from specific exercises. The game screen centers on an instructor, with indicators for your left and right hand rising from the bottom and telling you which type of punch to perform. If you land your punch while the indicator is on the square in the top half of the screen, you’ll get a “perfect!” rating and gain more points. Each exercise consists of a few warm up punches, before launching into a combo. When you reach a certain point in the combo, you’ll enter the “zone” state which gives you more points per punch and makes the screen go Mario Kart 8 levels of sparkly. Despite the occasional frame drops it’s incredibly satisfying to nail a combo when the insane zone particle effects are exploding all over the screen.

The timing for landing your punches takes a little getting used to. Each style of punch requires you to prepare in a slightly different way – for example, you’ve got to twist your body on the beat before an uppercut, whereas a jab should come from a neutral position. The Joy-Cons vibrate whenever you land a punch, giving you some nice haptic feedback. The game feels sluggish in picking up your movements at first, but eventually you get into a groove and learn to anticipate the next sequence of punches in each combo. Depending on your instructor, their advice could help or hinder your rhythm: Hiro’s voice actor is super off-beat with some of his counting phrases, which makes me want to finish my one-two combos into his smug face.

Learning the patterns of how your weight should be distributed between your feet is absolutely key to getting comfortable with each combo, and helps commit the exercises to muscle memory. Helpfully, a footprint indicator at the top of the screen shows where your weight should fall on each beat. When I was struggling with nailing an exercise, it was usually because I was shifting my weight in the wrong direction and I would have much more success when staring at the footprint indicator for a few rounds.

There’s a bunch of different songs to accompany your workout sessions, each transformed into gloriously terrible MIDI tracks to cope with the varying lengths and speeds of the exercises. There’s something just so wonderfully dorky about slinging left hooks in your lounge room to a cover of “Girls Just Wanna Have Fun” that sounds like it was written for the Gameboy Advance. You unlock songs gradually which gives you little goals to work towards: for example, today I worked out to an Ariana Grande song so that tomorrow I can jab it out to Darude’s “Sandstorm”. Yes, my life is thrilling, thanks for asking.

You can choose from nine different virtual instructors, each with their own unique voice actor and style. Their clothing, skin tone, and hair is customisable, and you unlock more outfit options for them by completing various “achievements” while you train. The instructors will speak a lot both during and in between exercises, and they’re relentlessly positive. While the lines they say are rarely different, the actors’ interpretations vary wildly so it’s worth trying out different instructors until you find the one that irritates you the least. I settled on the Aussie instructor Laura and picked out a fab disco t-shirt for her, then promptly got an achievement called “fashion saboteur” for mismatching her outfit. Savage. I should note that there’s some fanservice shenanigans happening in the instructors’ designs with certain outfits definitely encouraging ogling, but it’s not quite at the level of something like Xenoblade Chronicles 2 and, to be fair, seeing more of your instructor’s body does genuinely help with technique.

Players keen on a more game-like experience will be left wanting with Fitness Boxing 2’s offering. At a glance, it’s much more barebones than something like the recent Ring Fit Adventure (or even the Wii Fit titles with their various minigames). Where Ring Fit provides a lengthy story campaign, an RPG battle system, and dozens of different game modes, Fitness Boxing 2 avoids any distractions from its core gameplay. I was initially disappointed with the lack of side content, especially considering that Rhythm is in the game’s subtitle despite it lacking a proper rhythm challenge mode. However, since the experience provided is more akin to an exercise class or personal training session, you’re not really missing out on anything. It’s more of a gamified stand-in for going to the gym than a traditional fitness game, as my painfully sore shoulder muscles can attest. It’s a decent workout, too, getting the heart racing and the upper body and core working overtime.

Fitness Boxing 2 finds a sweet spot between the physical satisfaction of a group fitness class, and the incremental progress kick of a phone game with daily achievements. It’s an addictive loop of “exercise, unlock something, rest, repeat” that clicks into your animal-brain rewards systems in a subtle way, encouraging you to play regularly to keep up your progress without punishing you for taking a break. You get a little hit of endorphins from physical exertion, a little more from unlocking a song or instructor accessory, and then a long-term drip-feed from seeing your extended progress over time via the game’s My Data records. You can even carry over your progress from the original Fitness Boxing title. It’s compelling positive reinforcement, and exactly what you need as a potential newbie to exercise. Even the saccharin upbeat instructors contribute to Fitness Boxing 2’s psychological drive: I know I am a sweaty, disgusting blob-man at the end of a forty-minute workout, but I still feel damn gorgeous when Martina chirps “you look great!” for the tenth time. 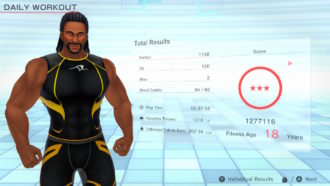 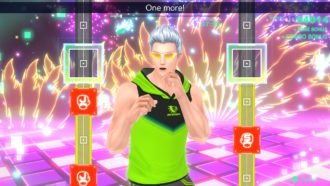 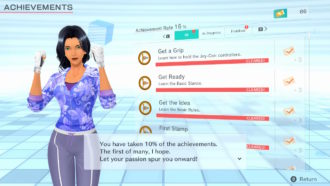 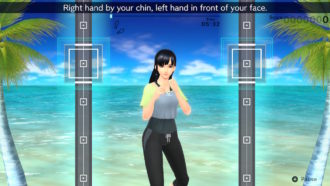 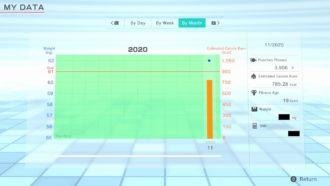 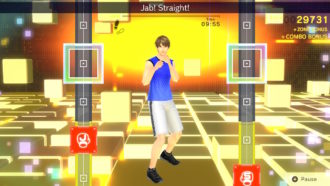 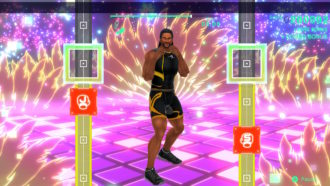 I should also note that there is a two-player mode in Fitness Boxing 2, allowing for single or double Joy-Con play on the same console. Unfortunately I haven’t had the chance to test this out as my living room is barely large enough to contain one ungainly Little Mac fan, let alone a second. I’m not sure that multiplayer would contribute much to the core experience, but I guess it’s always nice to have a gym buddy.

Fitness Boxing 2 is not going to be everyone’s Game of the Year – in fact, I’m hard-pressed to call it a “game” despite launching on a Nintendo console. However, it presents a finely tuned and engaging workout regimen with clear goals and excellent feedback on progress. With its cast of annoyingly optimistic virtual instructors to spur you on through intense, demanding, and varied exercises, as well as a wealth of unlockables to inspire the budding achievement hunter, Fitness Boxing 2 provides a high quality niche experience that’ll have you jabbing, weaving, and blocking like a sweaty Rocky Balboa.