Serious Sam is a franchise that’s been around for longer than you might think. I had the opportunity to review the latest entry in the series not too long ago, and suffice it to say – I came away loving it! Now the entire collection has been released and updated to run on modern hardware. Perfect for fans to jump back into these classic games and relive the nostalgia that comes with it. Unfortunately, the overall experience of playing through these old classics wasn’t an enjoyable one. While returning fans will no doubt find solace in the nostalgic rush that comes with playing a game you haven’t touched in decades, for newer fans like myself, there was a lot to be desired.

That’s not to say the overall package is terrible. The collection is great for bridging the generational gap, as well as providing easy access to the entire Serious Sam series along with its smattering of DLC add-ons. For old fans, there isn’t anything missing, but there isn’t anything new or improved upon either. The games themselves don’t feel like they’ve received any amount of TLC and it shows. While the third entry is the most similar to the latest game in the franchise, it’s arguably the worst performing out of the package. Despite playing on an Xbox One X, with a preference for frame-rate over resolution – performance was all over the place. But that seems to be a significant part of the Serious Sam brand at this point. Each game feels like it’s struggling under its own weight due to the number of enemies and mayhem it’s trying to throw against you on screen at once.

The Serious Sam franchise has a history of being bombastic fun with a plot that makes little to no sense at all. Whether it’s ripping off story beats from Terminator or character designs from Duke Nukem, the games don’t care. At the end of the day, the schlock is all in service of making a fun shooter that prioritizes the feeling of good gunplay with high responsiveness and a large enemy variety to keep things interesting. While this singular focused design may have worked in the early 2000s of gaming, nowadays people tend to expect a bit more from their game’s plot.

Essentially, alien invasion happens and Sam must travel back in time, to ancient Egypt of all places, to preemptively stop the invasion, all the while aliens are sending in their forces through time to try and stop him *cough* Terminator *cough*. While it’s not the most imaginative of plots, it’s serviceable enough to at least establish the scenario. Still, the overall pacing does suffer due to the lack of a strong compelling narrative and for the most part, you’re left on your own with not many supporting characters to liven up the drudgery of most of the game’s run time. The frustrating thing about the collection is that a lot of problems with it are already fixed in the most recent game. While this obviously makes a lot of sense, it would’ve been nice to see some of those quality of life and design changes retroactively added to the previous games. As it stands right now, the games themselves are displayed as they were many years ago and it’s a real shame. 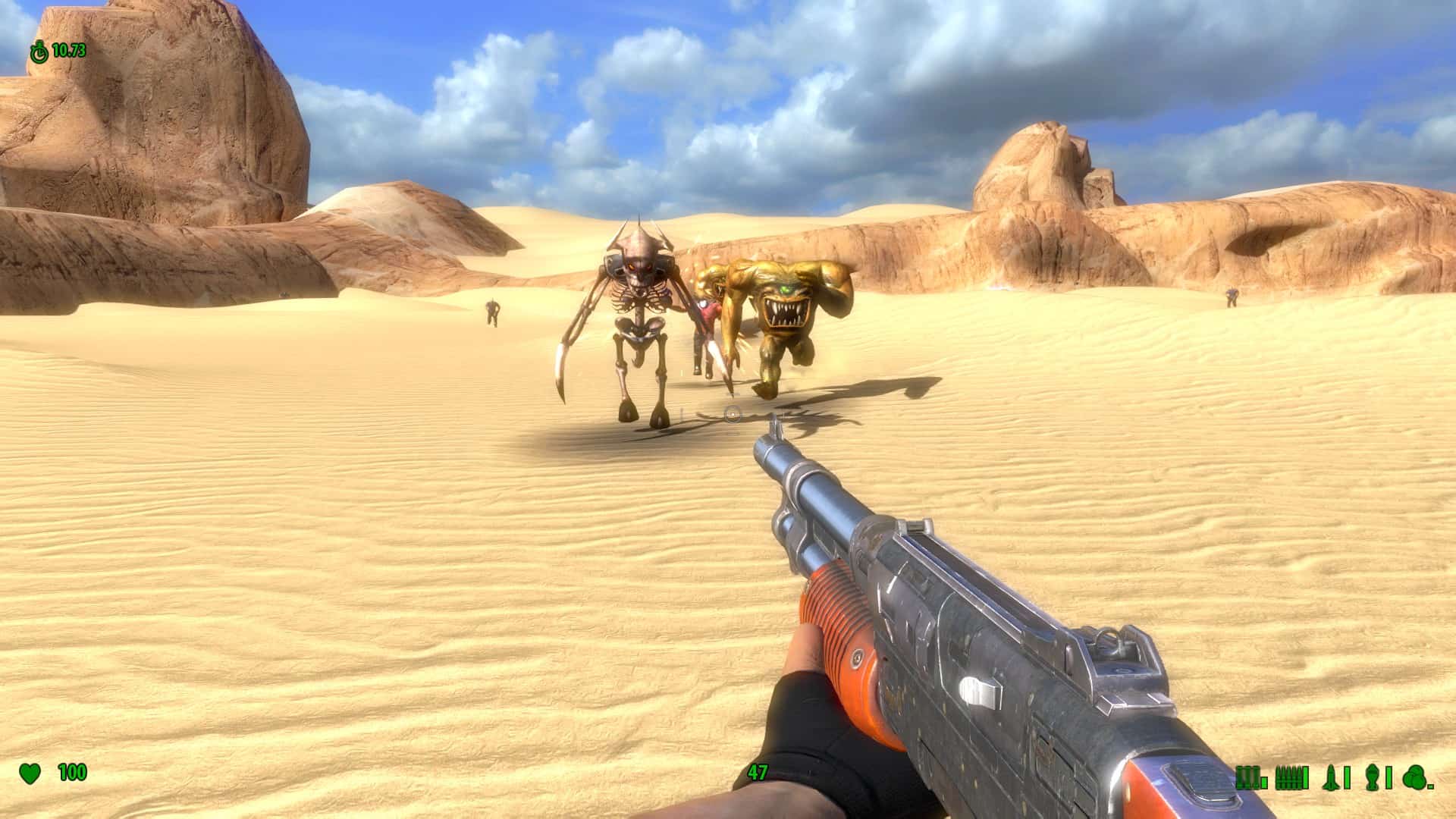 Either way, the fact that the collection exists at all is still positive. If not only so more dedicated fans of the franchise can journey back to the games that started it all. But when you start to look closely at each individual piece, the cracks begin to show. Not all games have the ability to remain timeless past their initial launch windows and sadly, Serious Sam misses out on that front. While the decision to release this collection so soon after the launch of Serious Sam 4 was no doubt intentional, I think some extra breathing room would’ve benefitted the collection nicely.

If you’re interested in trying out Serious Sam, start with 4 as you won’t be missing much of a story. And if you find yourself desperate for more mayhem, then perhaps give this collection a try. The Serious Sam Collection is available on PlayStation 4, Xbox One, and Nintendo Switch. While it runs okay on the console, I would highly recommend this be played on PC for the extra performance headroom and tighter controls thanks to a mouse and keyboard setup.

The Serious Sam Collection is a great option for players who are looking to journey back in time to relive these classic games. Or for newer fans who just came of the high, that is Serious Sam 4. Unfortunately, there isn’t too much to say regarding these games as nothing has been dramatically changed or updated for modern standards. The only real allure is the ability to play each game in the series (including DLC) on modern hardware. While this is fantastic for game preservation purposes as well as future-proofing the back catalogue for long time fans of the series, there just isn’t any real incentive for newer players to jump in.

My advice would be if you’re really hungry for some more Serious Sam goodness, it’s worth a shot if you manage to find the game on sale. Otherwise, I think it’s better to leave these games to their history and allow long time fans to relish in their updated forms that are now more easily accessible.