Cruel, unforgiving, desolate landscapes. A desperate journey across frigid mountain peaks and through pitch-black underground caverns. Violent, bloodied, monstrous beasts. One directive: find your way home. This is the premise of Unto The End, a 2D combat survival adventure that pits a lone adventurer against a harsh wilderness and a variety of wild, savage creatures.

There’s little fanfare at the beginning of Unto The End. The protagonist, a nameless Viking-esque man, takes up his sword and ventures out into the wilds with only a lock of his wife’s hair to indicate his destination. There’s no verbal explanation, and the story is told entirely through environmental clues. Setting out into a two-dimensional, side-scrolling world, the protagonist’s goals, feelings, and motivations are entirely up to your interpretation.

You’ll notice first of all that the visual and audio design of Unto The End is absolutely stunning. Landscapes are realised in a gorgeously minimalist art style, with characters rendered with incredible expression through animation. There’s such a satisfying use of different lighting and colour palettes to indicate environments, with warm torchlight dynamically illuminating the underground sections and the harsh blue sunlight of the tundra occasionally streaming in. A slight depth-of-field blurring of the screen’s edges also lends a filmic quality to gameplay. Monster designs are gorgeous and expressive. The soundscape is similarly minimalist, providing just enough atmosphere to lend tension to every moment. The protagonist’s heavy breathing is particularly immersive, and enemy snarls are downright terrifying. Make no mistake, this is a beautifully presented game.

The bulk of Unto The End’s gameplay is in its combat, each element of which is readily available from the start. At any campfire, you can access “sparring” which takes you through a combat tutorial. Each enemy requires you to read its movements and respond to break its guard and get in an attack. With your sword, you have access to high and low attacks and blocks, as well as feints and a dodge roll. You can also throw a bone dagger to do some damage from a distance. Movements are slow, methodical, and deliberate, and it’s important to precisely react to the attack the enemy telegraphs: even though the controls are responsive, your character is not speedy. Multiple button-presses will also be buffered by the game, discouraging you further from button-mashing. It’s even possible for your weapon to be knocked out of your hand mid-battle, requiring you to scramble to retrieve it.

There’s an element of creativity and improvisation to the combat that makes you approach each encounter differently. Underground fights usually take place in near darkness, meaning you’ll have to strategically decide where to drop your torch and make a stand. Foes can damage each other with projectiles, so you can strategically dodge a thrown rock or spear and take out an enemy in the process. Dropped spears can also be picked up and thrown by the player. The environment is also important, as dodge rolling or swinging your sword into a wall makes the player stagger, almost certainly leading to death. Unless you’ve crafted extra armour at a campfire, one or two hits will always be enough to bring you down, so avoiding damage is vital.

Some encounters can even be solved entirely without violence. For example, in some snowy ruins I discovered a little gremlin that ran away from me at first, before hiding behind a large gremlin and throwing deadly rocks at my head. I died a bunch of times trying to beat them, before realising that they only attacked when I got too close, and there was a small rock table in front of them. Pressing the interaction button at the table let me offer them some healing herbs, and the tiny gremlin offered me some sticks before the pair scuttled away happily. While you can’t avoid violence in all encounters, the design and storytelling of each one is unique and incredibly immersive. You’ll find different creature types battling each other, a troll that fights by swinging around an entire deer it just hunted, a gremlin warlord protected by a bodyguard, among countless other spectacularly designed situations that wordlessly describe the kind of world you’re exploring. You truly believe that each of these beings has its own place in the harsh world of Unto The End, and you as the player are disrupting an ecosystem where you might not belong. It’s clear that the husband and wife team at 2 Ton Studios made an enormous effort to build this world through its encounters.

While combat is the focus, there is quite a bit of world to explore, including some platforming and light puzzle-solving. I found the non-combat sections to be a little hit and miss. The puzzles boil down to finding and using the correct key on a door, while the platforming mostly requires you to dodge in the right direction to avoid getting crushed by something. Character movement is slow and deliberate to facilitate the combat, which makes any precision movement a little cumbersome and tedious. Repeating platforming sections after a “gotcha” boulder crushes you can be frustrating.

There’s a wider conversation about challenge, accessibility, and gatekeeping to be had in the context of “difficult” games. Mark Brown has an excellent series of videos on designing for varying levels of ability which, while coming from an able-bodied person’s perspective, discuss the reasons why a developer might choose to include or exclude certain kinds of player from experiencing their game. I don’t mean to turn this review into an essay, but Brown’s video about indie platformer Celeste’s Assist Mode came to mind regularly while enduring my repeated brutal deaths in Unto The End. While the former has a variety of assist toggles like damage negation, lowering game speed, and infinite dashes, the latter’s only assist option slightly delays enemy attacks. When you’re stuck in a particular fight, that’s it. Grind it out until you either master the combat or get lucky.

Practically, this resulted in repetition forming a core part of Unto The End’s gameplay for me. With the combat experience described as “read-react”, developers 2 Ton Studios have blended believable enemy AI with predictable movement patterns. For example, an early encounter has a strong monster charge at you while a weaker monster flanks you from behind. You’re in a dark cave, and you’ll drop your torch the first time you swing your sword. The first time you jump into a fight, you’re probably going to die. The next time you try, you’ll probably dodge the weaker monster and take them out, but you’ll die in a different way. Each time you retry, you learn a little bit more about how the monsters think and behave, until eventually you push through the encounter. It’s a combination of persistence, strategy, and reflexes that should feel satisfying to the right type of player.

Unfortunately, this also means that your progress is inherently tied to how well you can perform in a particular encounter, as the adventure is mostly linear. A few hours in I ran into a combat situation that I couldn’t beat, no matter how many times I tried. I spent about an hour repeatedly attempting to get through and failing. I took a break, tried again, walked the dog, tried again, had a whinge to the Checkpoint team, tried again, drank a beer, tried again, got through (!) but suffered a fatal blow soon afterwards, tried again, then gave up. I’m not exaggerating when I say that half of my total gameplay time has been spent on this encounter. The one time I did defeat the enemy, I suffered a stab wound that meant my character was “bleeding” which prevents the game from saving until you can patch your wounds at a bonfire. I can’t tell you just how furious I was slogging across that empty tundra, bleeding out without a bonfire in sight. I even came across a heartbreakingly beautiful encounter with an animal warrior clutching its dying mate, and I couldn’t even enjoy it because I was so desperately searching for a save point. 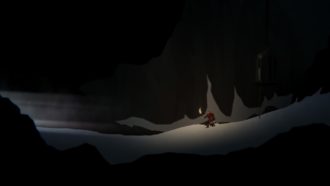 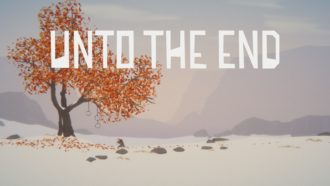 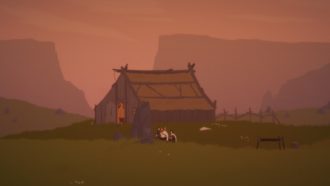 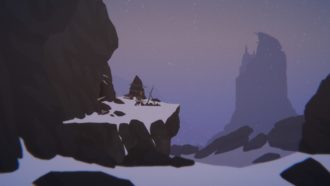 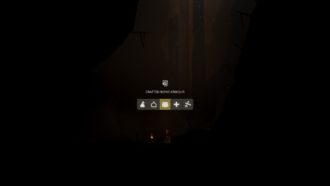 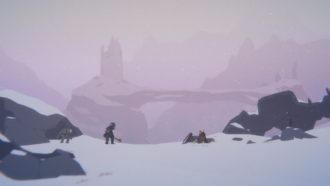 On reflection (and after a good night’s sleep), this bothers me less than it usually would. Unto The End is appealing to a specific kind of player, and this is reflected in its marketing and presentation. Publisher Big Sugar is careful to always describe the title as a “challenging combat adventure” that “places player skill at the heart of the experience”, and this certainly rings true in its gameplay. While this may not be an experience that I usually look for in a game, I acknowledge that there is a not-insignificant player base that craves challenge and I appreciate that they would be very satisfied with Unto The End’s savage learning curve. I’m only disappointed that my own skill and level of patience provided a barrier to experiencing every single one of the game’s unique encounters. Although with that said, it wouldn’t have harmed the core gameplay to include a few more accessibility options so that players with different skill levels could still enjoy and progress through the adventure. Moments of triumph can still feel earned even when the player can set their own level of challenge.

Unto The End is a beautiful and brutal journey that has clearly been crafted with a lot of heart. It presents an unapologetically skill-based combat experience with wordless narrative in a savage, hostile world. While its gameplay outside combat can be a little clunky and its high difficulty restricts its appeal to players with lots of patience and coordination, those looking for a unique and challenging 2D adventure will be well satisfied with Unto The End.