New genres in video games are rare, but in 2009, Demon’s Souls on PlayStation 3 managed to make that happen, bringing a new style of hardcore action RPG that presented a captivating challenge, where skill is paramount and learning from your mistakes is absolutely essential. We’d seen difficult games before, but after several years of campaigns that were almost impossible to fail, Demon’s Souls laughed in your face and forced you to “get good”. It didn’t launch in Australia originally, but I was so intrigued by the overseas critics praising it that I imported a copy, and I can’t recall a game that had tested my resolve so much.

This spawned the more popular Dark Souls franchise, along with plenty of other Souls-like’s; Bloodborne, Lords of the Fallen, The Surge, Nioh, Mortal Shell, Sekiro: Shadow Die Twice and countless others. While all of those games (some created by From Software themselves) brought their own twists and additions to the genre, they all have Demon’s Souls to thank for laying the groundwork for what the genre would become. In 2020, Demon’s Souls has been remade by the talented Bluepoint Games (who previously did the fantastic Shadow of the Colossus remake). While the visual upgrade is mind-blowingly gorgeous, some small quality-of-life changes and a commitment to keeping what made the original so special to begin with makes Demon’s Souls one of the absolute best launch titles of the whole generation, for those willing to truly test themselves.

What makes Demon’s Souls (and the Souls series in general) so damn satisfying is that it’s never unfair, as such. I mean, it certainly feels that way at times when you finally make your way to a boss battle only to be instantly stomped and sent back to the start of an area. But its combat is methodical and intense, not designed to be carved through quickly but via a slower, more discerning pace. Demon’s Souls in particular, as the beginning of this genre as a whole, could be seen as even more exclusionary than the series that followed. That is to say, if you’ve played some of the more recent entries into the genre, you may find the world of this PS5 launch title even more difficult to understand and navigate.

What we see today from more recent titles like Sekiro is the masterful way in which From Software loops the environment back around on itself via shortcuts, creating paths back to safe areas so that you can restock and use the checkpoint as a reprieve. Demon’s Souls does this too, but you can see that it’s more of a humble beginning of the concept, as opposed to the confident style utilised today. It also doesn’t follow a clear pathway in the way that other games do. Instead, after the opening area – which could be seen as a long-form tutorial to learn the ropes – Demon’s Souls will give you access to five different worlds, and it’s up to you to decide which one to head to next. It’s not uncommon to find yourself stuck on a particular section within one of these, which is a sign that perhaps you should explore somewhere else and attempt to move through there instead.

“Each world tests you in different ways with different combat rhythms, and bouncing between each of them to find a path forward is encouraged.”

It’s an interesting system, far removed from waypoints and obvious quest-markers that litters most modern RPGs, and really does force a trial-and-error approach. Cleverly, it’s not a simple matter of enemies in some worlds being “stronger” than others. Instead, they have a real variety that makes every area feel unique. The first world features castles, gates and bridges where you’re constantly under threat of a fire-breathing dragon. The second, claustrophobic tunnels with miners that barely take damage from conventional weaponry. The third, a prison with Cthulhu-headed creatures that can kill you with one blow while spitting magic at you. The fourth, an island full of faster-paced skeleton warriors and flying storm beasts. The fifth features a poison lake that is as fun as it sounds. Each one tests you in different ways with different combat rhythms, and bouncing between each of them to find a path forward is encouraged.

All worlds are accessible via a hub called The Nexus, where confusing pieces of narrative are reeled off to you, but also serves well as a place to upgrade your character by trading in souls or enhancing your weaponry. It’s a chance to chat with the other fallen heroes you’ll find there as well, and is a nice safe space (that looks brilliant in this version, by the way). Each area within each world is capped off with a threatening boss battle that gives you an overwhelming feeling of dread whenever you first encounter them. While some smaller enemies may catch you off guard and annoy you, the boss fights in Demon’s Souls are really the culmination of all the skills you learn along the way. They’re some of the most memorable and iconic fights in the franchise, with giant fire-breathing spiders, giant dragons, giant overbearing warriors… I guess most of them are pretty big, come to think of it. They’re tough, but besting them still feels incredible, urging fist-pumps to the air and celebratory cheers when you’re successful. It’s always that awesome feeling of overcoming insurmountable odds that has become synonymous with From Software games, and it’s a wonderful reminder that these difficult foes are where it all began. 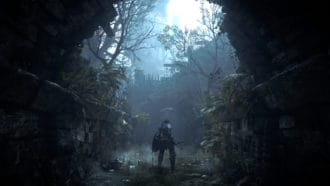 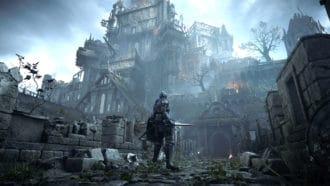 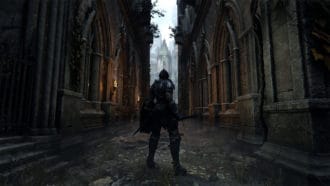 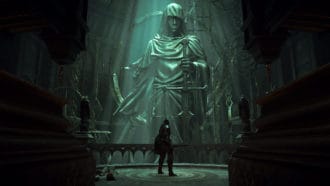 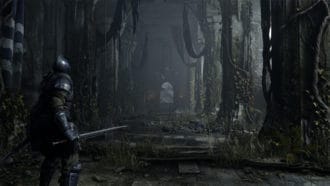 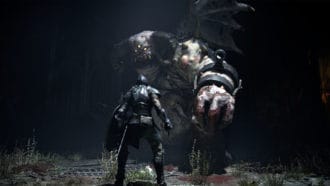 If you can’t tell from the screens or gameplay trailers, Demon’s Souls looks astounding. Bluepoint have taken the dark, foggy and dreary world of the original and given it so many little details that make it feel at once incredibly different, yet eerily familiar. The maps and enemy placements remain the same, but the fresh coat of paint give them a living, breathing quality that was missing back in the day. It feels like the team have captured what Demon’s Souls was always meant to be, and that is the vision of a creepy and gorgeous world that pulses with the evil creatures within it. Even the facial expressions of enemies are visible and effective; they show emotions and react realistically to every hit, whether it’s with fear or aggression. The environment adjusts to your every step. It’s stunning, and to be able to have this level of visual fidelity on day one of a consoles lifespan? The future looks bright.

Framerate is also drastically improved; you can opt for a performance mode with more frames or a slightly-prettier cinematic mode that sacrifices the speed, but for a game like this and for me personally, I’d rather it run smoother. It looks incredible either way, honestly. On top of all of this, load times are only a few seconds when moving between areas and reloading after a death. In a game where death happens a lot, and learning from those deaths is part of the consistent loop, having to sit through loading screens for minutes at a time in the old days made for a pretty tiring experience. Now it’s barely enough time to have a sip of drink before you’re back in the action. It’s such a seamless, slick-feeling experience that shows off the power of the SSD, and is a genuine game-changer.

“It feels like the team have captured what Demon’s Souls was always meant to be, and that is the vision of a creepy and gorgeous world that pulses with the evil creatures within it.”

Other small quality-of-life improvements from the original are welcomed; for example, you can now dive in any direction as opposed to the measly four directions from 2009. Touching on one of the bonfires can reload the whole area with enemies to save you traveling back to the Nexus, and even the UI has received an update so that you can see your weapon durability and also see which item is up next when you’re cycling through, which is incredibly handy in the heat of battle. You can also send items directly to your storage box back at the Nexus, which is a godsend in a game where carrying too much stuff can weigh you down and make you slower, causing a nasty ripple effect when overwhelmed in combat.

There are some mechanics in Demon’s Souls that do remain a little stuck in the past, however. The game can absolutely still be a bit of a grind, where you need to farm certain areas for souls so that you can upgrade your character and gear before you can proceed. If you don’t, you’ll be dying quickly and even more often. Then, when you do upgrade your weapons, it’s… confusing, to say the least. There are 16 different types of upgrade materials that you need to find, and each form of upgrade requires different materials. It can be a head-scratching mess. And while you’re doing all of this grinding to improve your stats, the health restoration is different from the Estus Flasks we’re used to from other games in the franchise. Instead of being refillable, you have to either buy health-restoring grass from vendors (using souls that really should be kept for upgrading) or kill enemies in certain areas in the hopes they will drop some. Once you use it, it’s of course gone. While I love that Bluepoint have stayed true to the vision of what made Demon’s Souls such a cult hit, it’s frustrating the advancements even those developers have made in recent years are ignored here in favour of keeping the “classic” style of the original.

Oh, and what is World Tendency? Still not sure, really. 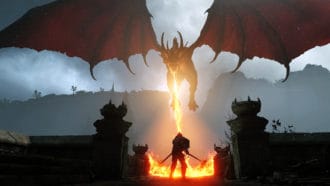 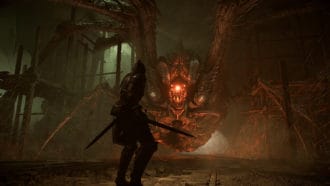 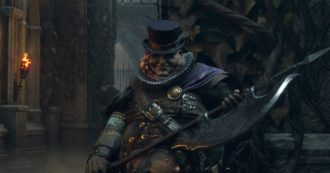 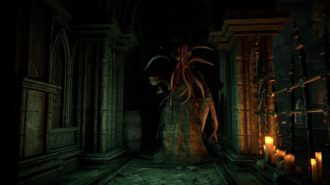 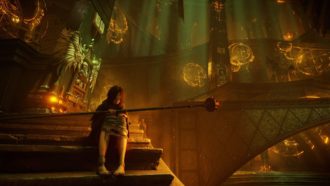 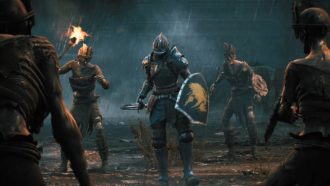 Despite the improvements that were ignored, it’s hard not to be enamored with Demon’s Souls all over again (or, for the first time as a newcomer). It’s a fantastic remake that is by far the most beautiful launch title on the PS5, and Bluepoint have done such a wonderful job of updating the 11 year old action RPG in other smart ways that keep it feeling modern while still referring heavily to its strong foundations. If you’re picking up this game as your first foray into the genre, I wish you well – although, you’ll definitely have a much better experience today than you would have as a newbie 11 years ago, like I was. In 2009, Demon’s Souls was unforgiving and brutal. In 2020, it still feels a bit like that, but with in-game tip videos and asynchronous multiplayer that is more populated than I’ve ever seen in other games from the series, at least you’re not doing it alone.

Demon’s Souls was an iconic, industry-changing game that made everyone stop and take notice. To update this title from two whole generations ago and put it front-and-center of the PS5’s launch line-up in 2020 was a ballsy move, but Bluepoint have proven once again that they are masterful at thoughtfully updating cult classics for a modern audience. Don’t be fooled by how pretty it looks; Demon’s Souls is still a game that will absolutely test your patience and kick your ass. The way the world is pulled together is unique to say the least, and some of its archaic systems could certainly use some explanation. But there’s something about Demon’s Souls that’s difficult to put into words, and difficult to quantify.

It’s so alluring, so magical, so mysterious and just so damn captivating that even when you’re dying over and over, you simply can’t stop exploring. With little touches that only the new generation of consoles can provide, this 2009 remake is the best launch title to add to your collection. Get your shield up, and prepare to die.