Skul: the Hero Slayer is an action rogue-lite platformer developed by SouthPaw Games and published by Neowiz. The game was released in early access in February 2020. Since then, SouthPaw Games has built up a dedicated community around the game, with many praising its fast-paced combat mechanics and cute pixel graphics. Once I got stuck into the game, it was easy to see why.

Skul: The Hero Slayer sees you playing as a tiny skeleton warrior named Skul, who is tasked with the gargantuan mission to save his imprisoned demon king. As expected, this isn’t an easy task. At the start of the game, humans – who are the skeleton and demon empire’s biggest enemies – have partnered with the Carleon Empire, which means Skul will now have to take on significantly stronger adversaries to achieve his goal. On top of this, most of his fellow skeleton warriors have been taken prisoner, leaving him to face the music on his own. As a result, you’ll have to come up with clever ways to outwit enemies in combat and learn new skills to take on increasingly stronger adversaries.

The first thing I noticed when I booted up the game was how stunning the visuals are. Skul’s world is colourful and inviting; it’s easy to so why the title appeals to so many. Allies, enemies, and the environment are all rendered in incredible detail and each character feels visually distinctive and unique.

While the graphics are great, the game’s story is quite generic. I enjoyed the way that Skul: The Hero Slayer turned certain clichés on their heads, making humans the bad guys in the Skul universe instead of the monsters, the game’s dialogue was awkward and stilted in places. There were several moments where sentences could have been worded better or would have benefitted from more polish. A few times I wasn’t entirely sure what a character meant, and at as result, I ended up skipping the dialogue altogether.

Luckily though, Skul: The Hero Slayer’s game mechanics more than make up for its lacklustre dialogue and story. The game is split up into four different acts, interspersed with small cutscenes to further the story. Similar to titles like ScourgeBringer or Celeste, Skul: The Hero Slayer is a rogue-lite, which means that you’ll have to finish all four acts in one single run in order to beat the game. Each act is set in a different location, and each location comes with unique enemies and environments. While the first act is set in a forest and features evil trees, for example, another is set in a castle where you’ll fight chambermaids and palace guards in golden armour. All levels are also procedurally generated, meaning that no two playthroughs will be the same.

If you die at any point during a run, you’ll lose all abilities you’ve collected and you’ll have to start over from scratch. The only thing you hold on to is dark quartz, which, like in ScourgeBringer, allows you to buy simple upgrades through a skill tree before starting another run. These upgrades vary from upgrades to your overall health, to increased physical damage, to magic damage. 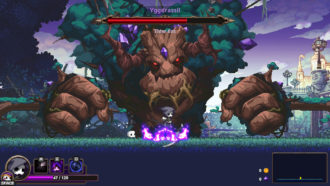 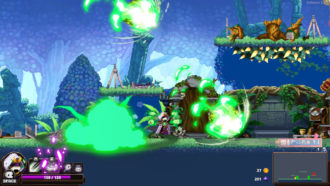 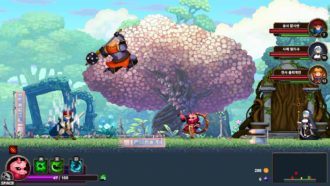 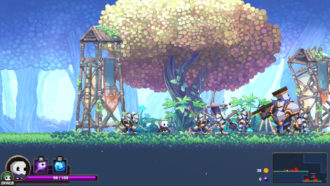 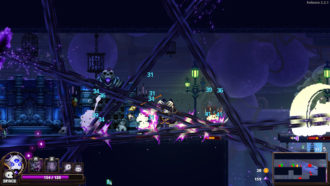 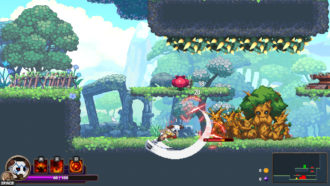 In addition to this, there are also some original combat mechanics that spice things up in Skul: The Hero Slayer, the most distinctive being Skul’s ability to swap his own head with other skulls you find along the way. Each skull you find gives your different powers and abilities, and you can use up to two skulls at a time. You can find skulls after defeating particularly tricky enemies, or alternatively, you can buy them from an in-game merchant. The game comes with dozens of different skull combinations to try out, making the game’s combat more varied and exciting. While some skulls may inflict poison on enemies, for example, others allow you to steal gold or use a giant mace to do more damage in a fight. However, most of the time there is a trade-off: one skull may provide a weapon that allows you to damage enemies more heavily, for example, but it’ll come with a movement penalty. Another skull may allow you to dash between enemies quickly, but your armour defence stats will be drastically reduced.

Needless to say, the degree of variety and replayability that the skull mechanic adds to the game is phenomenal, and it’s easy to while away the hours with different abilities and power-ups. Skul: The Hero Slayer’s battles are fast-paced and thrilling, and the game effortlessly delivers old-school hack-and-slash fun with a unique combat twist. If you’re a fan of rogue-lites and don’t mind dying many, many times over, Skul: The Hero Slayer is sure to draw you in, one run at a time.