Fans of classic Legend of Zelda titles will feel right at home with Heliocentric Studios’ Rogue Heroes: Ruins of Tasos. The game takes many elements from those classic action-adventure titles, while adding rogue-like, multiplayer and farming sim components to mix things up somewhat. Rogue Heroes is certainly very charming, and hits the mark more often than not, but a somewhat wonky difficulty curve and a litany of glitches hold the experience back.

The game takes place on the once-peaceful island of Tasos, whose population have been scattered by powerful beings known as Titans. Your player character is tasked with venturing to the four temples in which the Titans reside to restore the land to its former glory by defeating them. In the meantime, you can rebuild settlements and shops in your home base of Intori village, and partake in some farming and fishing in your spare time. There is not a whole lot of exposition, but it does the job just fine of justifying the adventure and establishing a classic fantasy feel.

The general gameplay of Rogue Heroes: Ruins of Tasos will feel pretty familiar to anyone who has played The Legend of Zelda: A Link to the Past. You travel across the overworld, completing fetch quests and delving into dungeons to unlock new tools to help you progress. Combat is comprised of relatively-simple top-down sword slashing, mixing it up with tools that you can buy or find in dungeons.

There are also multiple classes in Rogue Heroes: Ruins of Tasos that grant various special abilities. Although each class’ moveset is more or less the same, each class grants different stat allocations, as well as special movement abilities (like a leaping move for the Knight, or a flying broomstick for the Witch).

The dungeons are randomly-generated, with the rooms containing the boss key being custom-designed. While this setup kept dungeons varied between runs, specific room puzzles began to repeat after a while. Procedurally generating challenges is not quite a substitute for designing dungeons by hand. At least the bosses themselves were quite fun and challenging for the most part. 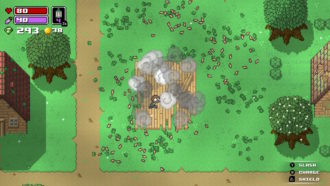 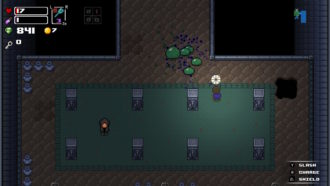 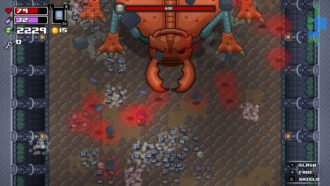 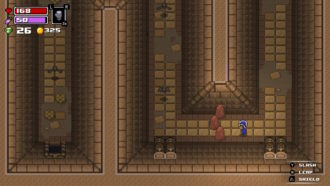 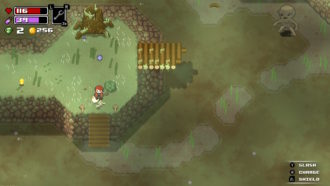 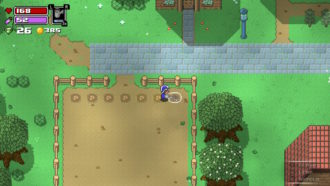 Fortunately, I found the overworld between dungeons rather well-designed and visually interesting. Each region has a bunch of hidden collectables and upgrades, encouraging exploration and experimentation. There are also various optional sidequests that take you off the beaten path and explore more of Tasos.

Unlike the various dungeons, all of the areas and mini-dungeons are custom-designed, and I enjoyed steadily uncovering new parts of the map. Players can also farm ingredients to sell and acquire more currency, and go fishing for additional loot. While those elements are not as integral to the experience as, say, Stardew Valley, I found them fun and charming little side activities to play around with.

…the game is perhaps a bit too generous with the number of gems you acquire in the average dungeon dive.

One aspect that sets it apart is the whole “Rogue” aspect of its title. As the name suggests, Rogue Heroes includes elements of the Roguelike genre, where you must start dungeons from scratch when you die, but can invest gems found in chests and harvested from defeated enemies to increase your stats for future runs.

It is an intriguing concept, with plenty of stats, tools and buildings to invest your currency into. However, the game is perhaps a bit too generous with the number of gems you acquire in the average dungeon dive. It does not take long for you to increase your health, damage and critical chance to the extent that you become practically unbeatable. By the halfway point, the threat of death and restarting my progress was a distant proposition.

Rogue Heroes: Ruins of Tasos can be played either solo or via local or online multiplayer. It is perfectly playable solo, with no puzzles or content requiring other players. For those looking to play cooperatively, you and up to 3 can play through the game together. It is fairly easy to set up, with a player hosting and other players entering their game. It does have some balance issues; I was not able to test out the multiplayer until late in my playthrough, and I was matched up with online players with lower stats. Some kind of mode that balances the stats of the players, or scales the difficulty based on party size, may be desirable. That said, I liked how players can keep gems acquired during multiplayer sessions in other players’ worlds, and I can see it being a fun experience with friends, rather than random players.

Unfortunately, my main problems with the game stem from the many technical issues I experienced throughout my playthroughs. I encountered two game-breaking bugs where mission-critical NPC dialogue did not trigger, causing me to need to restart my save file from scratch. Some of the most egregious issues have been patched, but other rough areas remain. A memorable example was when I glitched through a wall into an area I was not supposed to access yet. The online play also feels somewhat unstable, with my session randomly crashing partway through.

Rogue Heroes: Ruins of Tasos is a promising bundle of neat ideas. Quite often, during overworld exploration, completing a sidequest or defeating a boss, it all clicked into place, and I was having a great time. That said, the lack of polish begins to grate over time, even discounting the occasional severe game-breaking bug. Besides that, there are balance issues, leading to a rather challenging early game and a very easy late game that was probably not intended.

Overall, Rogue Heroes: Ruins of Tasos may be a few more bug patches away from a solid recommendation. However, if you want an enjoyable Zelda-esque title to play with your friends, it is certainly one to keep an eye on.